WHAT IS IT?
The Lexus LC500 is a 2+2 sports coupe that draws inspiration from the LFA supercar as the brand's new halo vehicle. It is available in Australia in two guises; a V8 petrol and a V6 petrol/electric hybrid. Both cost $190,000.

WHY ARE WE TESTING IT?
Beneath its concept car styling the LC500 is the first Lexus to ride on an all-new platform, called GA-L, which will also underpin the next-gen Lexus LS. It promises to offer significantly improved dynamics and will form the foundation of other new Lexus models for some time to come.

MAIN RIVALS
Lexus says the BMW 6 Series and Mercedes-Benz SL-Class are its targets, but the LC is likely to be cross-shopped by potential Jaguar F-Type and even entry-level Porsche 911 Carrera buyers.

THE WHEELS VERDICT
The best sporty Lexus since the LFA. The LC500 is a cohesive and engaging mixture of design intrigue and driver appeal that makes a compelling alternative to more obvious grand tourer choices. 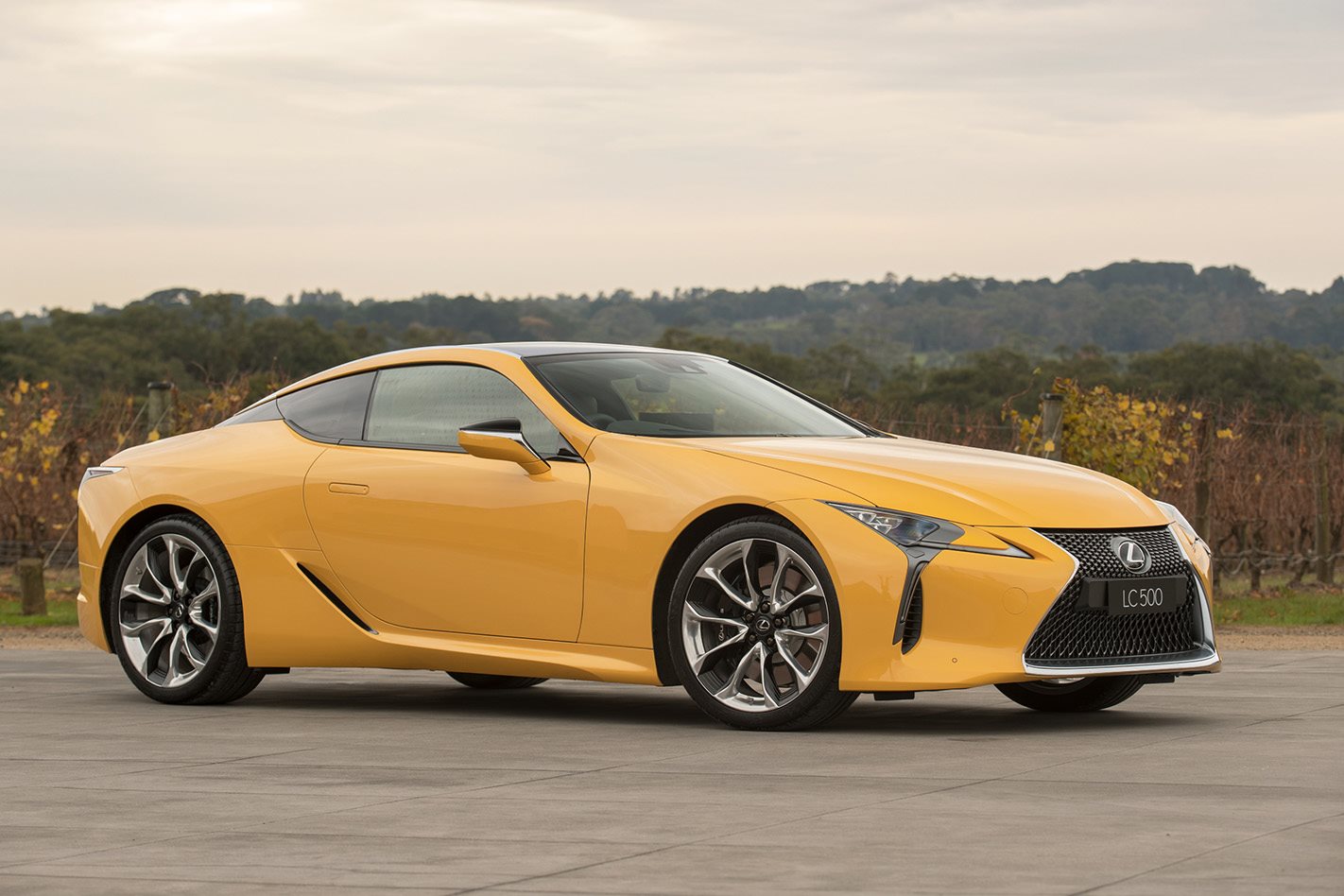 THE WHEELS REVIEW
Five years ago Lexus did something new. It showed the world a brave two-door coupe with no intention to build it – a concept in the truest sense – a move never pulled by Lexus before.

It was dubbed the LF-LC Concept, and was the handiwork of Toyota’s design studio in California. Its reveal at the 2012 Detroit motor show came at an important moment in the brand’s story; the inimitable LFA supercar was still in dealerships, the right people were taking notice, and there was a mood that suggested Lexus might finally shake the last of its reputation for being a bit anodyne and dreary.

The LF-LC was an overnight success. Demand for a production version of the concept was so strong that Lexus transferred the program to its tech centre in Aichi, Japan and gave a team of engineers the problematic task of turning a design studio’s pipedream into reality. 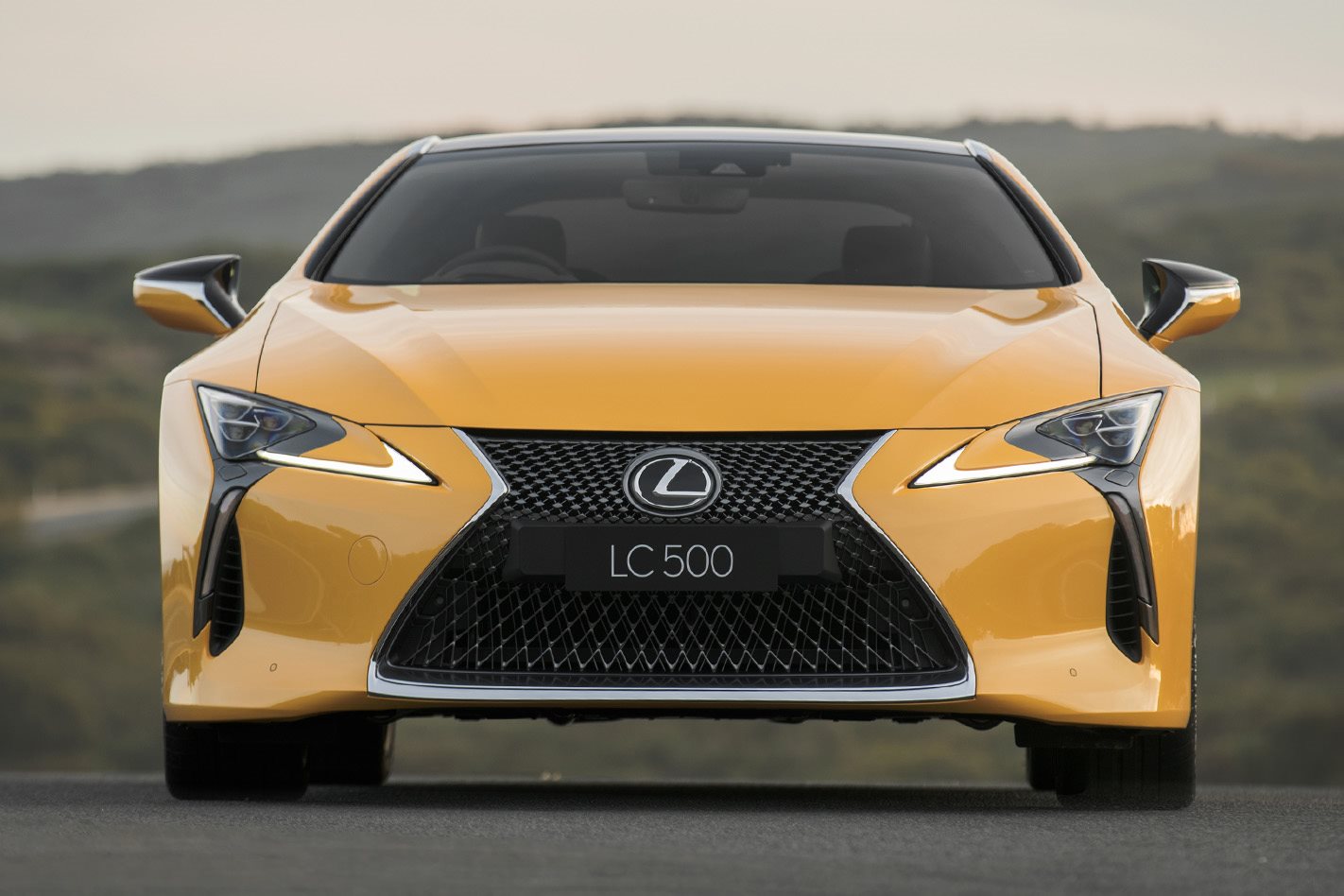 Now, the LC500 is finally here and almost nothing about its exaggerated styling was changed during its lengthy gestation period. The 2+2 is as striking as it was back then, verging on spaceship-like next to humdrum traffic.

Beneath its deliciously detailed bodywork lies the all-new GA-L platform that will form the basis of the next-gen Lexus LS sedan as well. It boasts myriad high-tech advances, lightweight construction methods and greater rigidity than anything to come before it – including the carbonfibre LFA.

Two versions of the car are offered in Australia priced identically at $190,000, which feels a bit expensive for the LC500h hybrid. Its combined output of 264kW from a 3.5-litre V6 and electric motor isn’t enough to pull off the performance-focused brief in this instance. It's also let down by an unusual ‘multi stage’ gearbox that links a conventional four-speed auto and a CVT to simulate 10 unique ratios. It slurs and whines, and is ill-fitting for such a polished and pricey vehicle. 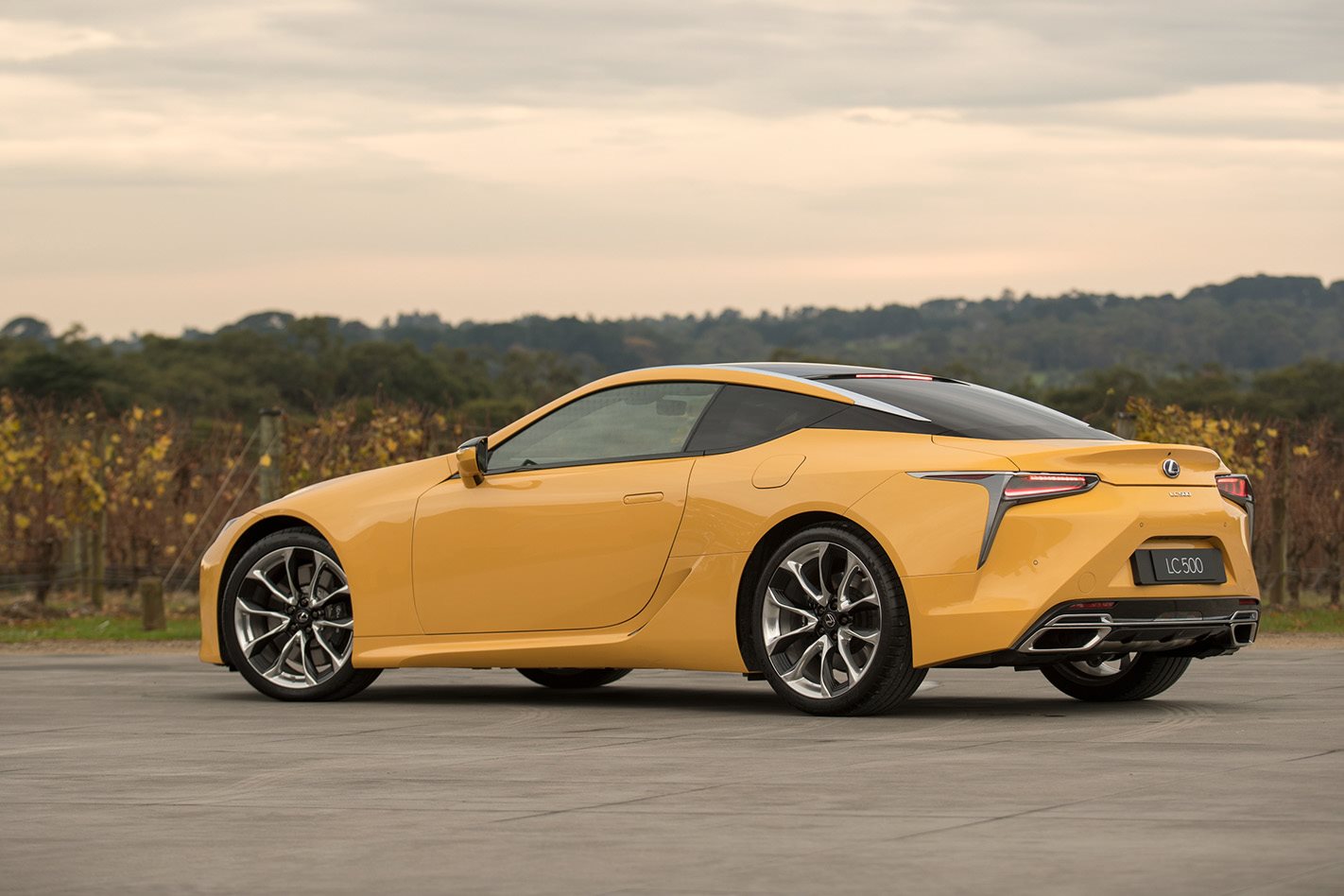 The pick of the pair is the regular LC500, powered by a familiar 5.0-litre naturally aspirated V8 similar to that found in the GS F and RC F, though with revised heads and an extra 10Nm for outputs of 351kW and 540Nm. It couples to an impressive new 10-speed automatic transmission, with short gearing making the bent-eight feel livelier than ever. It’s a brilliant ‘box; quick up and down, smooth and decisive.

Above 4000rpm the V8 flourishes with an addictively deep and throaty howl building to a 7100rpm peak with exhaust cracks on upshift. Its relatively moderate power is delivered in a paced manner, such that managing the throttle as you might with an over-torqued turbo engine is unnecessary. Simply stand on it and let it go. Are kilowatts really king? Maybe, but the objective here was optimal dynamics through a focus on emotional value rather than specs, and in isolation it’s really rather good.

Chassis poise is remarkable given the LC500’s 1970kg kerb weight. Its centre of gravity sits as close as possible to the driver’s hip point, making it easy to control that mass when threading along a narrow road. Even on a racetrack it never feels like that much weight is shifting around. Strong brakes with good pedal feel, and a high grip threshold give nothing away. It’s easy to place for something so big – 55mm wider and 75mm longer than RC F – and only restrictive electronics hamper the experience when having a go. 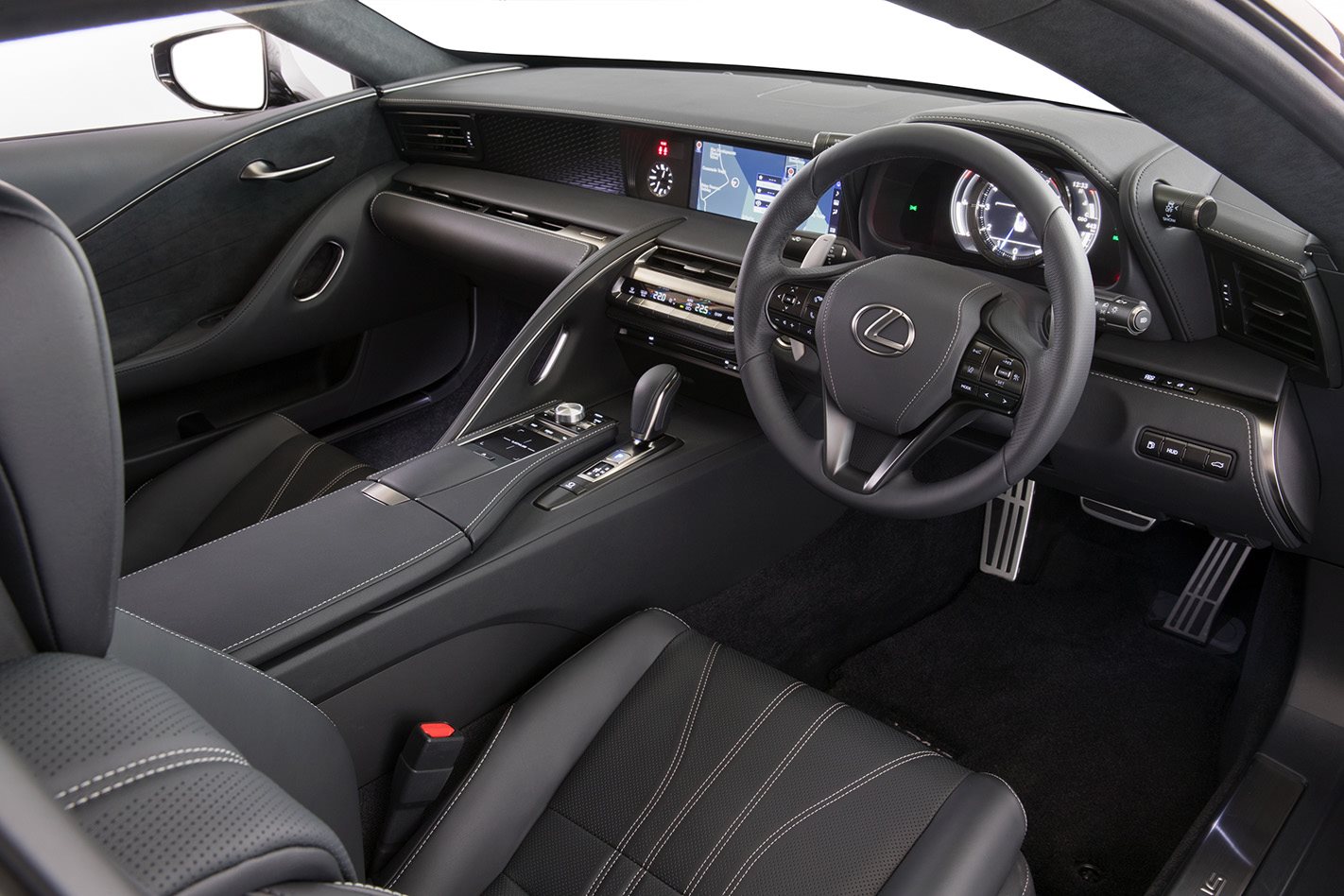 Guiding a much-improved front axle is the smallest wheel in the Lexus range (365mm). Steering is progressive and more direct with less dead-zone around centre than in the GS F and RC F. LC500 engineers freely admit to benchmarking the steering against the Porsche 911, and though it doesn’t quite reach that upper echelon it’s a step forward for Lexus.

An optional Enhancement Pack adds four-wheel-steering that can feel overly pointy on the road and takes getting used to, though the tighter low-speed manoeuvrability is a plus. At higher speeds the system adds stability, but the car is capable enough and has a more natural feel without it.

Oddly, there’s not a great deal of difference in ride quality between Comfort and Sport. The LC500 was a bit fidgety and choppy and found it difficult to carry speed along cratered roads on our short test. Huge, 21-inch run-flat Michelins with stiff sidewalls at each corner probably don’t help. A little more compliance in the adaptive dampers when softened off completely would get the LC500 closer to the ultra-polished grand tourer tone that its interior suggests. 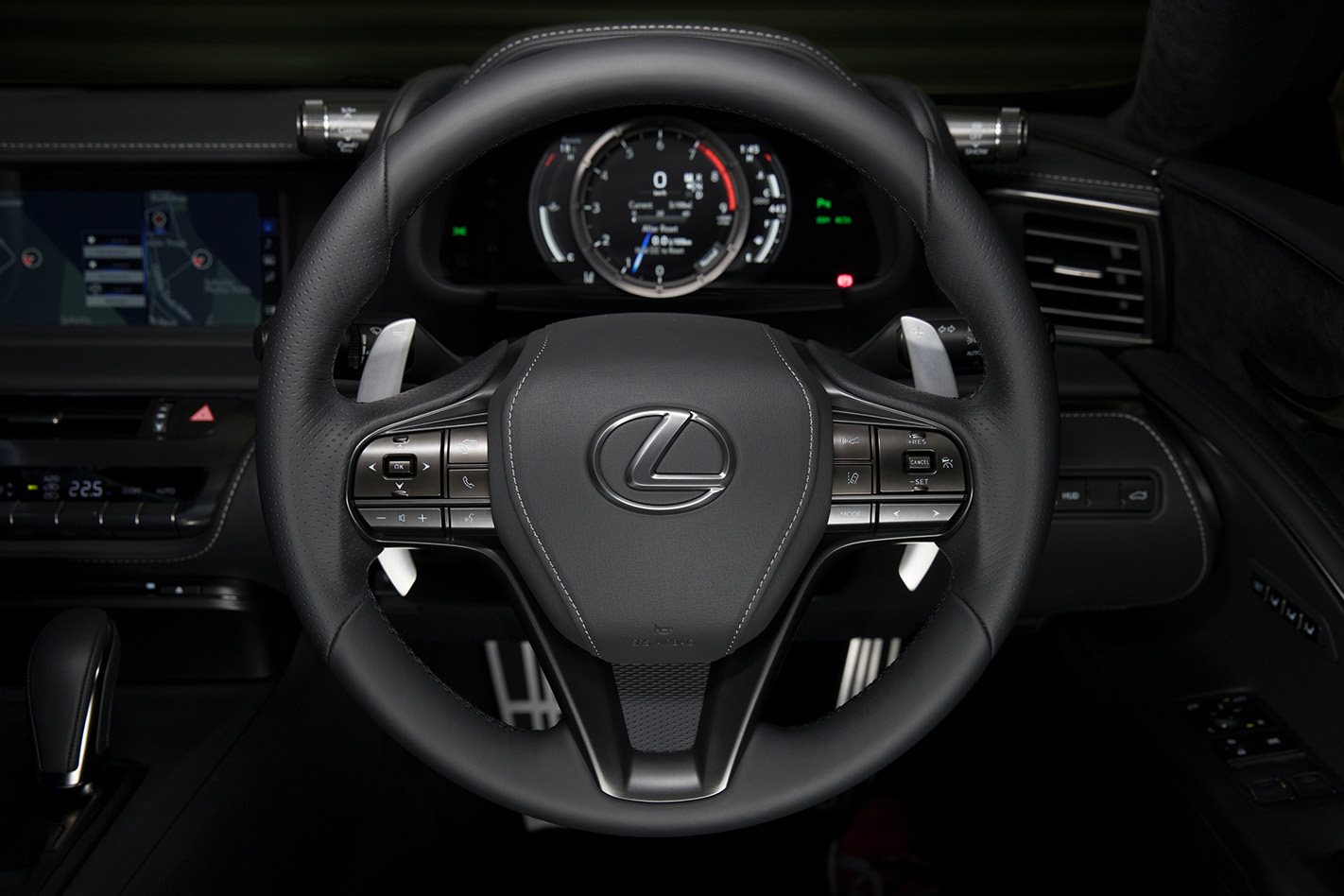 It would be easy to get lost in the details of the LC500’s cabin, like its floating door handles and magnesium alloy paddle shifters, or the seemingly infinite shapes and embellishments on every surface. Attention to detail is as expected, though the luxurious design does feel weirdly dated in some ways. There are buttons strewn about the place and the awkward ‘Shrek’s ears’ controls for drive mode selection and traction control poking out from the instrument binnacle aren’t to everybody’s taste.

The same digital dashboard used in the LFA features here, its single, movable dial resembling a watch face and continuing the supercar connection started with the exterior. Updates to the Lexus infotainment system and improvements to the haptic touchpad have made the LC500 easier to live with. Its heated and ventilated electric seats are supremely comfortable, and the cabin is well-isolated from wind noise even if some tyre roar does cut through.

The LC500 is a daring bit of work, and easily the most cohesive sporty Lexus since the LFA. It encourages and rewards enthusiastic driving, and is much more than simply a design statement. There's a bit of LFA magic in the LC500, and though it's not perfect it's an intriguing and justifiable alternative to the obvious grand tourer options. 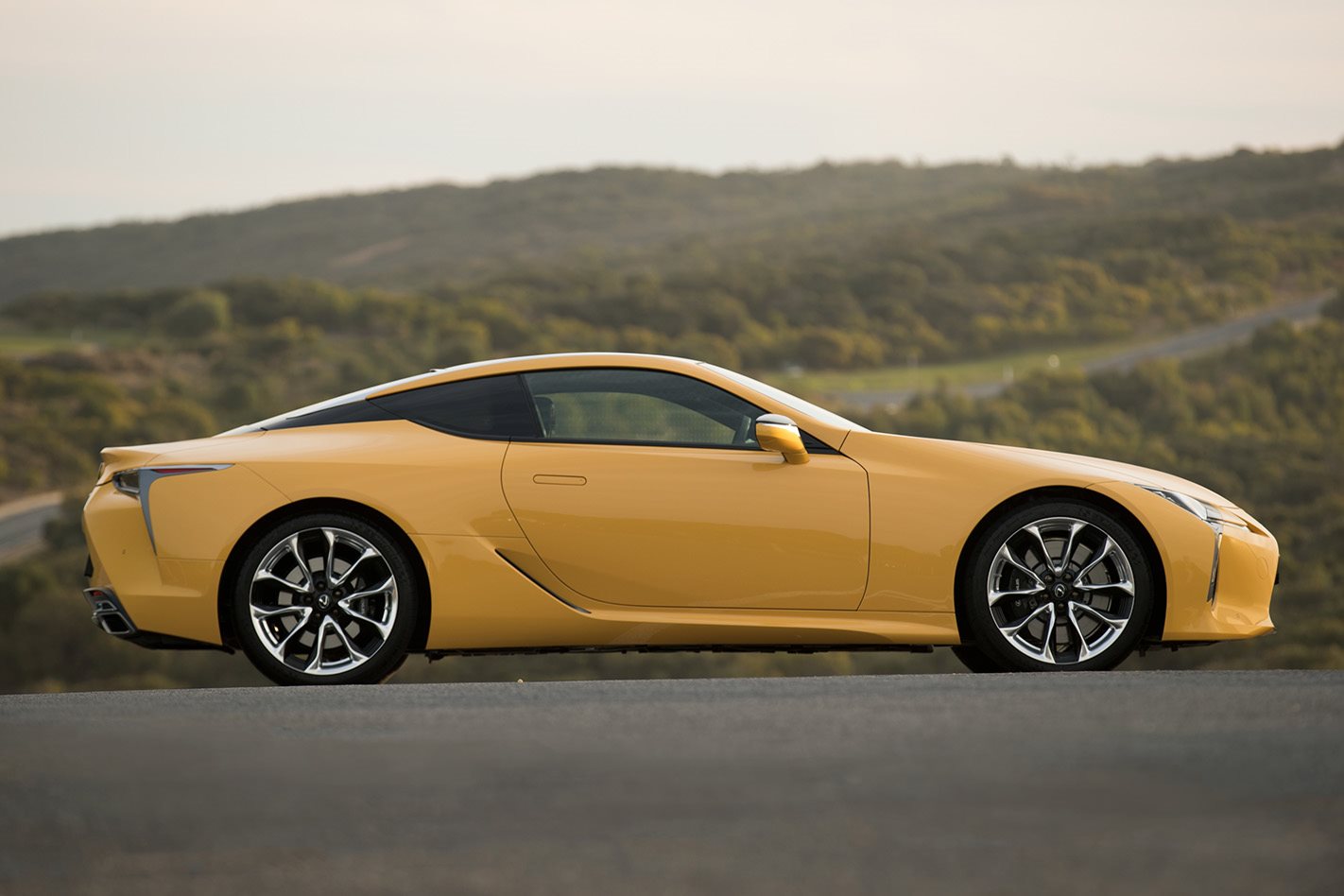 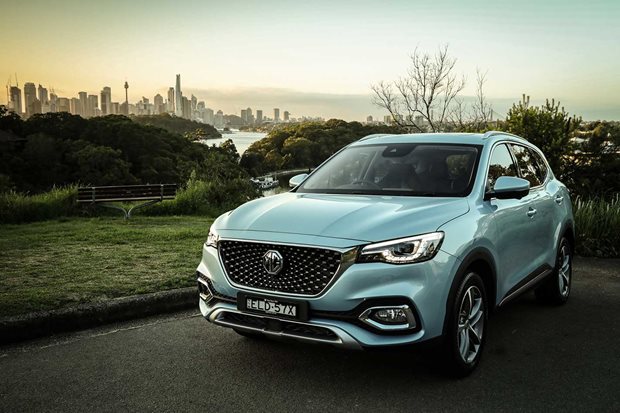 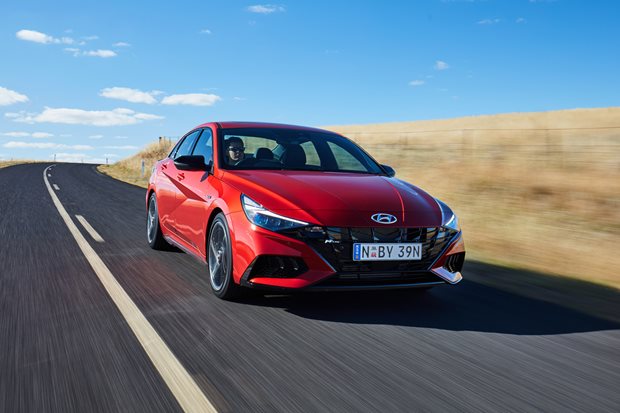