MASERATI now has a car to take on the might of the Porsche Cayenne. Taking up the Italian sports car brand’s fight is the Levante, the first-ever high-riding model from the Italian powerhouse.

WHAT IS IT?
The Maserati Levante is the first-ever SUV from the Italian sportscar brand. It joins an already crowded market hungry for high-riding luxury.

WHY WE’RE DRIVING IT
Because if Zegna ever designed a track suit, it would look like this. 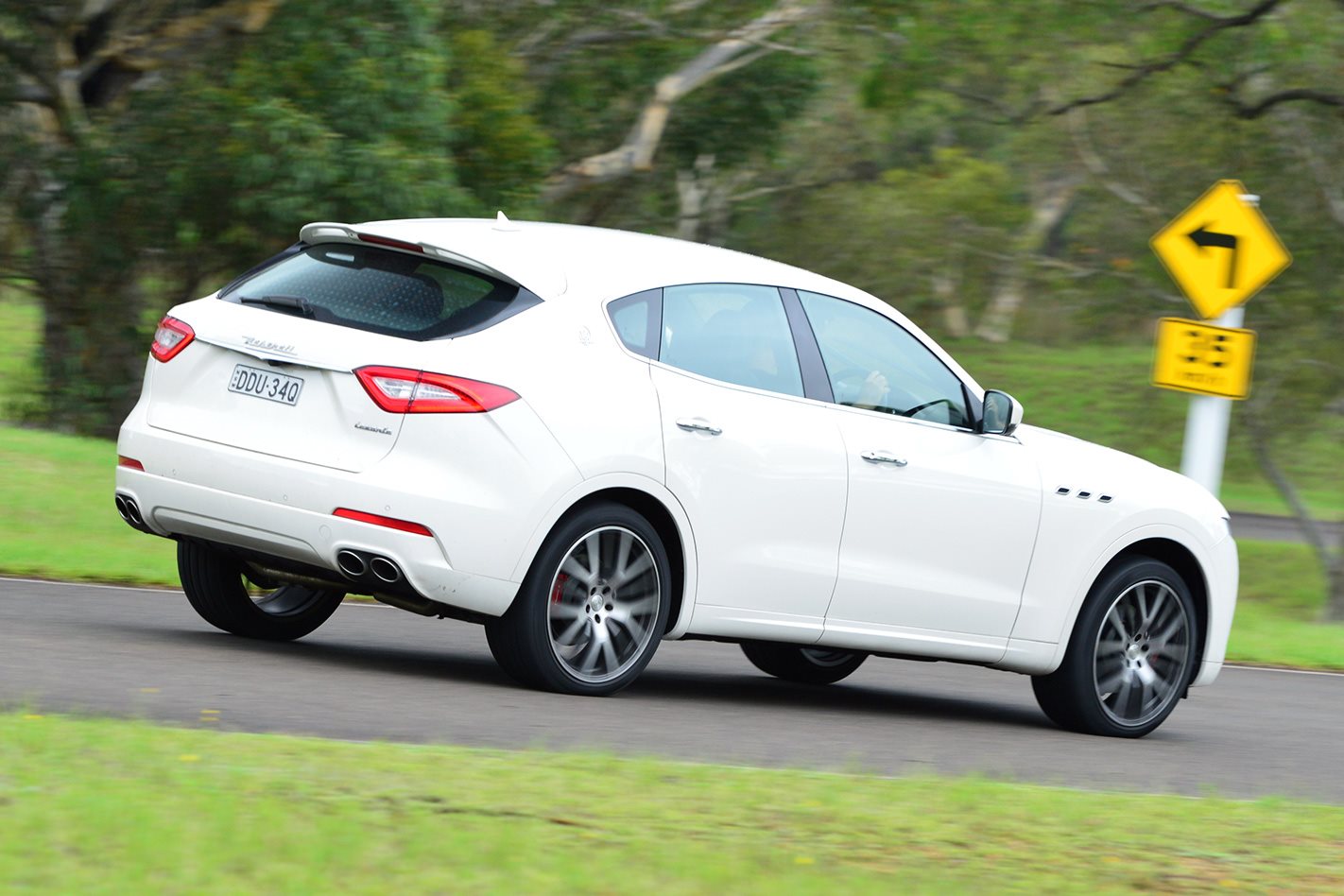 THE WHEELS VERDICT
Sharp in looks, but a bit blunt in performance, the Levante doesn’t quite live up to expectations. Maserati’s SUV is a bit like David Beckham in a suit and tie; everything looks good until it opens its mouth to speak.

THE WHEELS REVIEW
MASERATI. It’s a name etched in a rich history of racing and sports cars, with beautiful, shapely, flamboyant models designed to turn heads and generate envy. It’s something of a sad indictment, then, that even it eventually has to bow to the demands of the market.

The reality is, high-riding SUVs are in demand, and a growing part of even the luxury market. If Maserati was to survive into its second century, it would need to redefine itself. With the Maserati Levante, it sort of has. 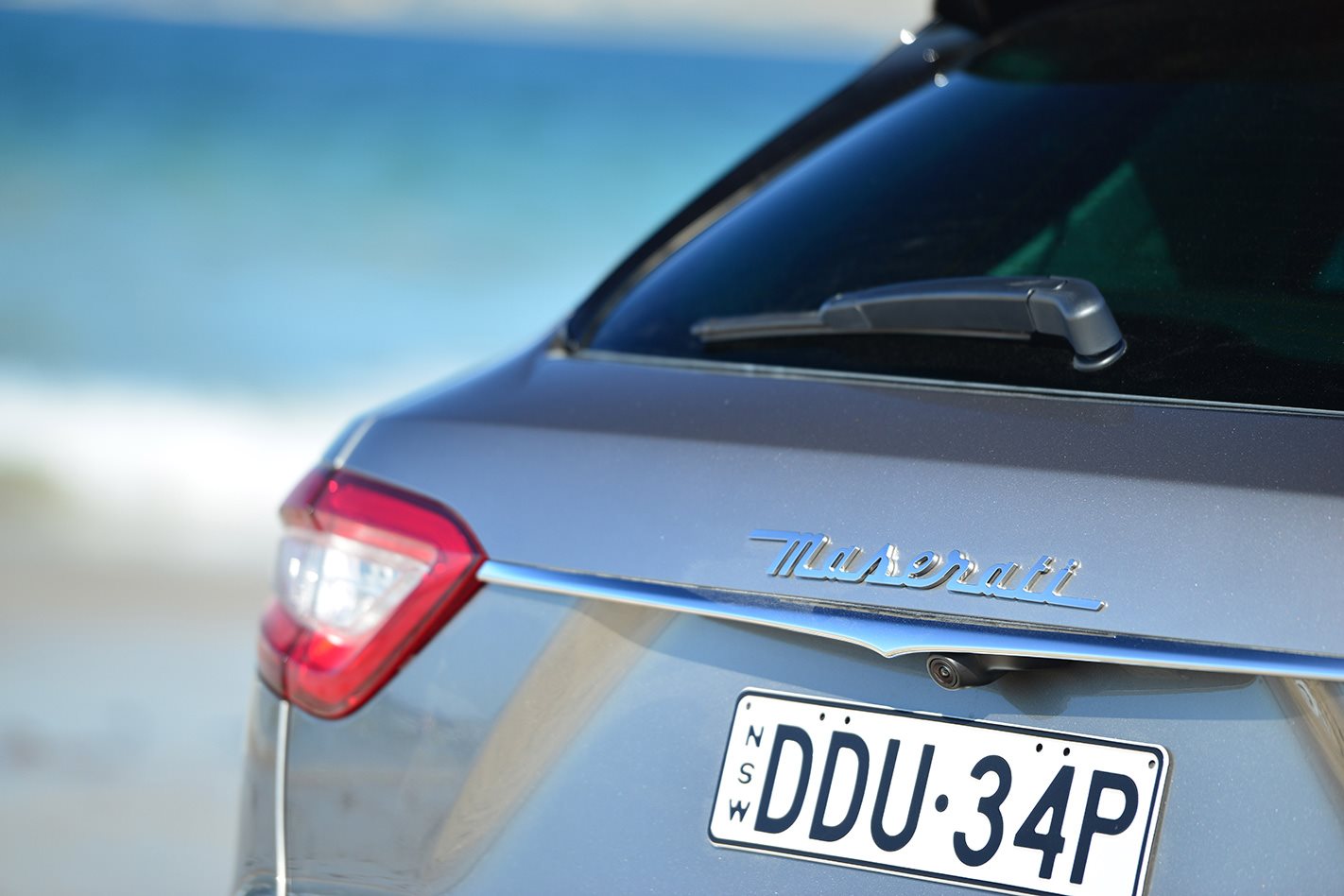 The Levante is a latecomer to the SUV party. Porsche’s Cayenne, launched in 2002, brought the German luxury carmaker back from the brink, and today it and the smaller Macan account for three out of every four sales for the brand. Maserati, meanwhile, hopes the Levante may one day account for one in every two sales.

Even before we crack a door (unlocking it via a beautifully crafted, large and heavy remote key), there’s a problem. The only engine developed for right-hand drive is the 3.0-litre diesel, with the lack of the 3.0-litre petrol V6 severely limiting the Levante’s market appeal.

From the front Levante is unmistakably Maserati, the big, baleen whale mouth, guard-mounted air vents and the swept, slash-like headlights giving it a strong family connection. Big hips and a thin D-pillar down the back give it distinctive coupe lines.

Levante is built on the same platform that underpins the Ghibli and Quattroporte sedans, and that shows. Open the driver’s door with its frameless window, and there’s a huge expanse of skin hanging under it that wraps around to the SUV’s rocker cover. However, the aperture it opens to is sedan-small, not SUV-large. 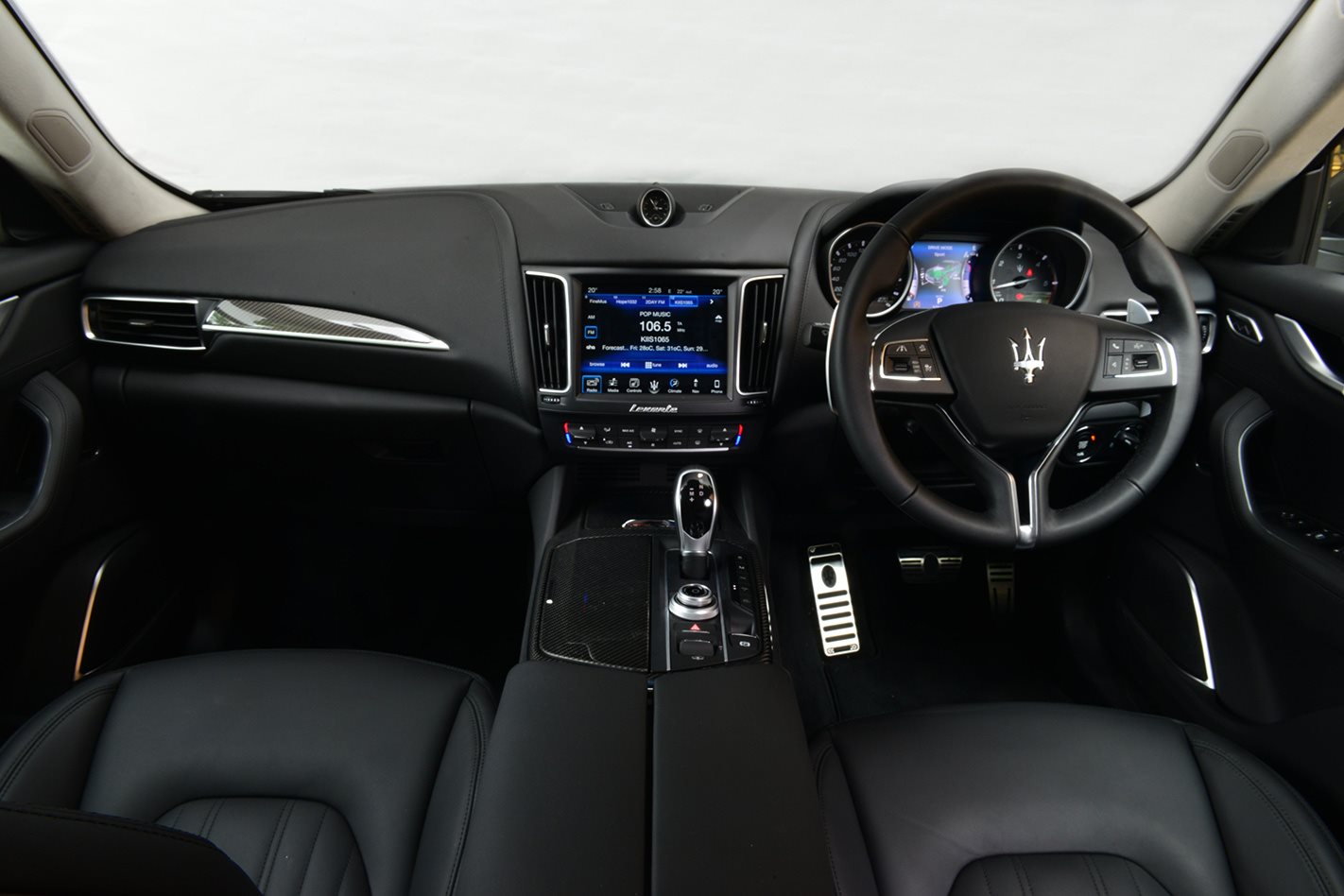 Still, getting in is easy, and once settled in behind the wheel the crafted, quilted leather seats are comfortable and supportive. In front of the driver is a thick steering wheel, with paddle shifters fitted Maserati-style to the steering column. An analogue tacho falls under the right eye; a speedo under the left. Both flick playfully when the start button is punched.

The cabin around the driver is functional, although the large, square touchscreen mounted high on the dash below an analogue clock – the de facto luxury car benchmark – has a lot going on, with rows and rows of virtual buttons controlling everything from the sat-nav to the surround-view cameras.

The diesel engine isn’t a Maserati strong suit. Sourced from fellow Italian VM Motori, it’s laggy on step-off and sounds much like tofu tastes. Punch the Sport button twice to beef up the suspension and sharpen the throttle, and it adds a slow, resonating “bom-bom-bom” at idle and a sound like radio static to the exhaust note under load, giving the illusion it has a higher cylinder count than just six.

The ride borders on firm around town, but comes more alive as speeds increase. The Levante, boasting a 50:50 weight distribution and lowest-in-class centre of gravity, transfers the weight of its 2205kg bulk quite well, showing only a hint of headshake through corners. It’s a shame, then, that the steering – hydraulic rather than electrically assisted – lacks decent feel, suffering from just a little too much on-centre vagueness. 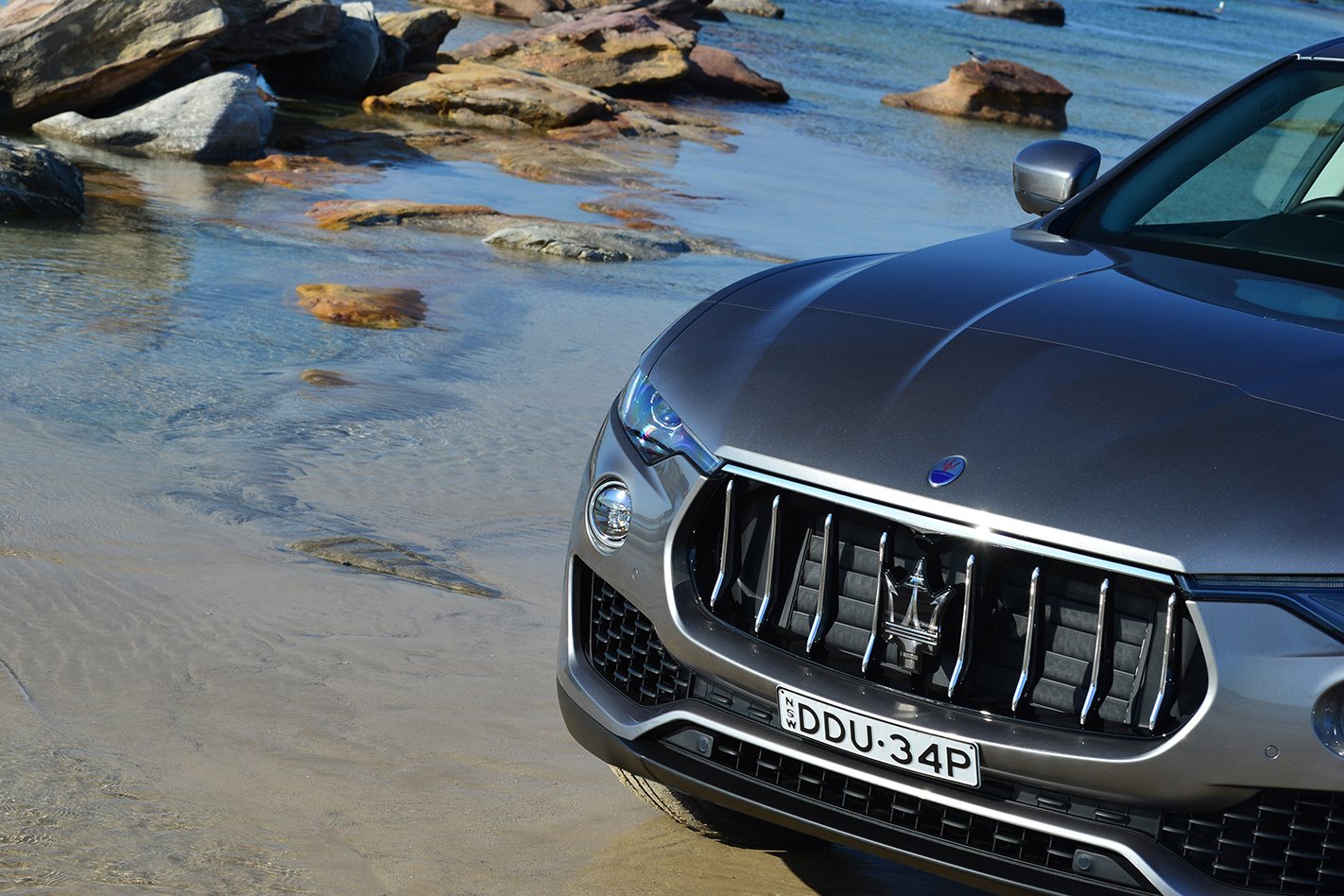 The eight-speed automatic – controlled by a confusingly complex selector – does well to mask the engine’s lag, and the “Skyhook” air suspension and all-wheel-drive system shared with its sedan siblings allows you to get on the throttle in corners even earlier, accounting for the turbo lag and the extra grip as the rear-biased drive, shared with a limited-slip differential, splits between the back and front wheels and the ride height hunkers down. String a few corners together, and the Levante can be a bit of flatulent-sounding fun. It can also go off-road if that’s ever an option.

It also had more swathes of leather; carbonfibre trim; Maserati tridents stitched into the front and rear outboard seats; a remote tailgate that opens at a sweep of a foot under the rear bumper; and heated rear seats.

That all adds up to an extra $48,504 over the base car. For a $188K-plus package lacking a more appealing petrol-engined option, it struggles against more keenly priced competition. 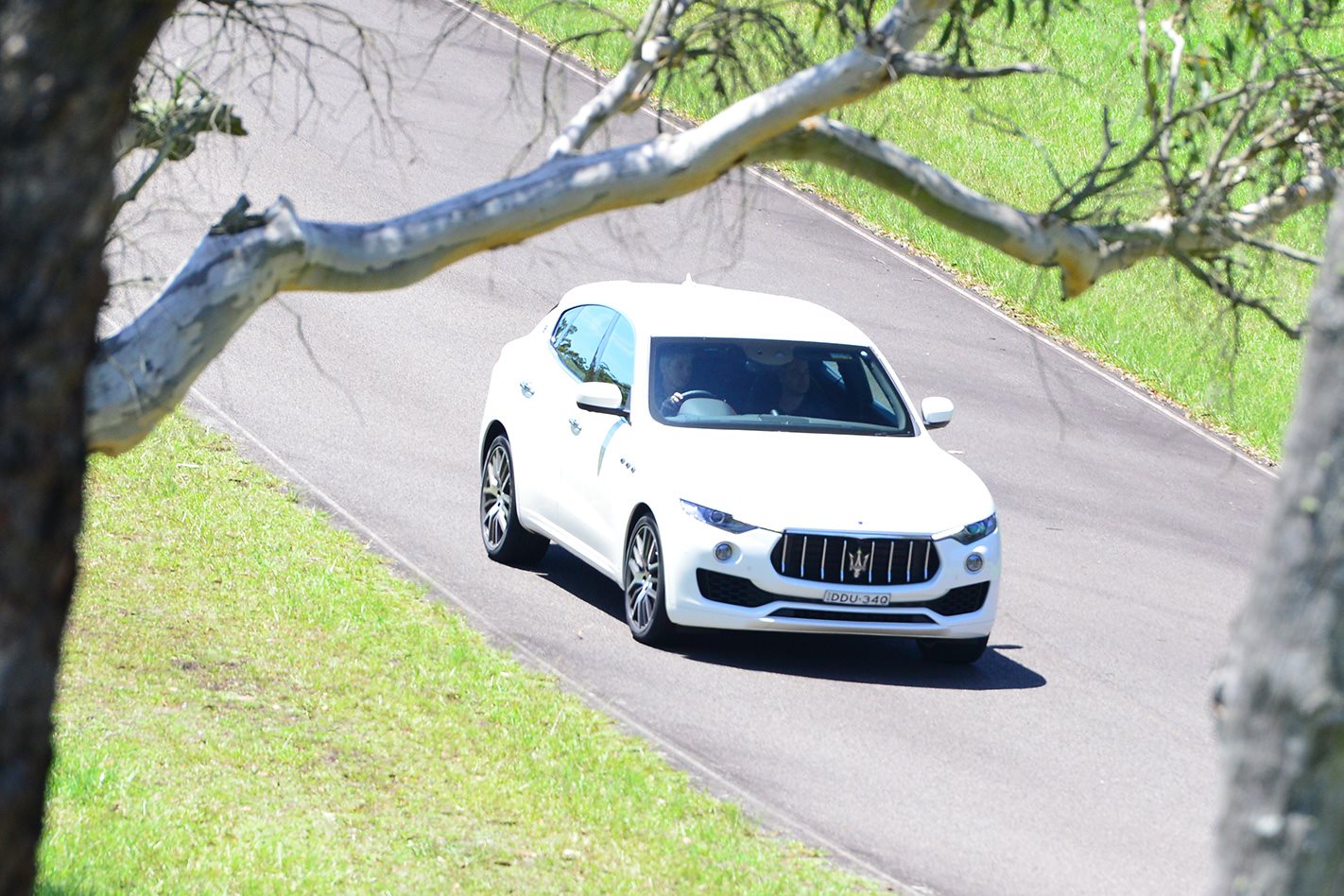 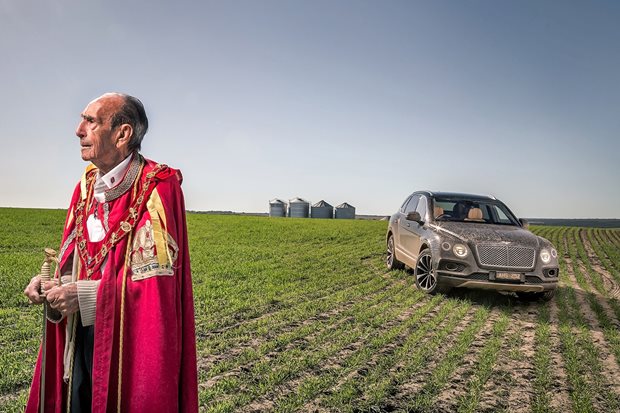 Bentley Bentayga: Fit for a prince

It’s the Queen’s marque of choice, so surely Bentley’s big luxury SUV is the perfect car for our own outback monarch. We visit Prince Leonard in remote Hutt River to find out 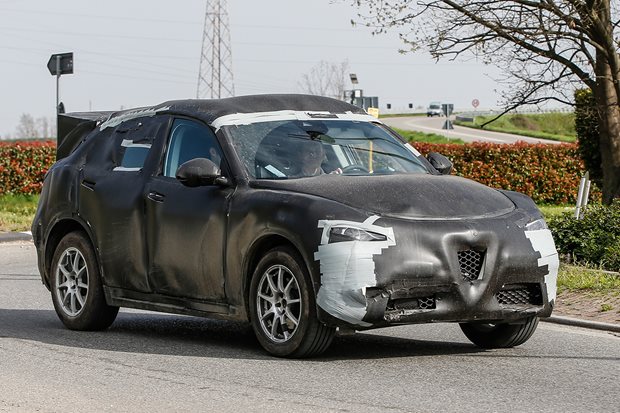 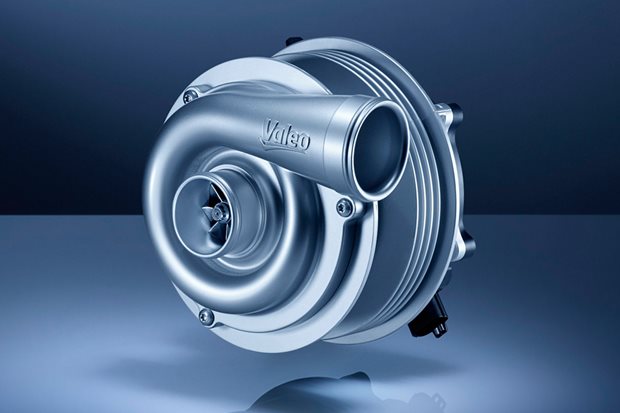