MAZDA reckons the world needs more sports coupes, and what better way to kick things along than with the Mazda MX-5 RF, a rear-drive targa based on its 2016 Wheels Car of the Year-winning two-seat roadster? But is the "Retractable Fastback" as great as the convertible?

WHAT IS IT
The MX-5 RF is little more than a regular 2.0-litre ND Roadster with fixed side sheetmetal behind the doors, retractable glass and roof panels, extra sound deadening, and minor suspension and steering retuning. But despite an extra 45kg and a higher centre of gravity, it still drives like an MX-5.

WHY WE'RE TESTING IT
We love the Mazda MX-5, because it’s perhaps the most pure proper sports car priced at less than $50,000, certainly the truly affordable only two-seater roadster, and just so life-affirming to drive. Before driving it, we were unsure whether the world actually needed a tin-topped version, especially after the pointless RC Roadster Coupe from the previous-gen NC, but this is everything that car wasn’t, starting with the drop-dead gorgeous silhouette. 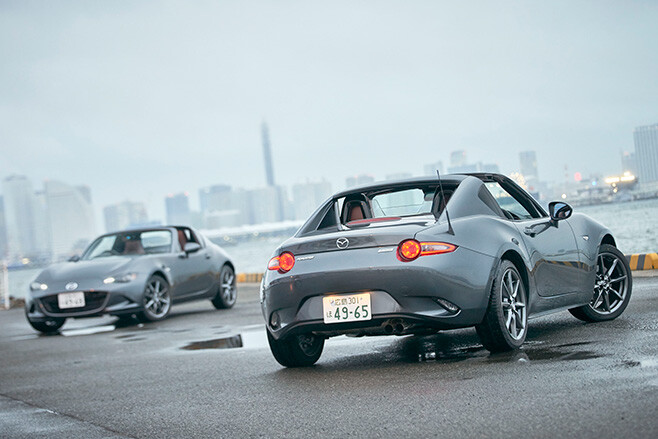 THE WHEELS VERDICT
The previous Mazda MX-5 with a folding hardtop (NC RC Roadster Coupe) looked less appealing than the convertible on which it was based. And it was expensive. This time around, though, the company has devised an evocative targa design that gives the icon a true sleek coupe styling, but with the added security and refinement advantages that a retractable hardtop bring. Weight jumps 45kg, and the centre of gravity rises a bit, but nothing short of a back-to-back drive would reveal these, meaning that pretty much all of the convertible’s fun dynamics carry though. So does the road noise, but that’s all part and parcel of MX-5 motoring, right? It’s a welcome addition to the range, then.

PLUS: Evocative design; MX-5 dynamics remain; slightly quieter than Roadster
MINUS: Poor side vision; not as quiet as Mazda claims; even smaller luggage capacity 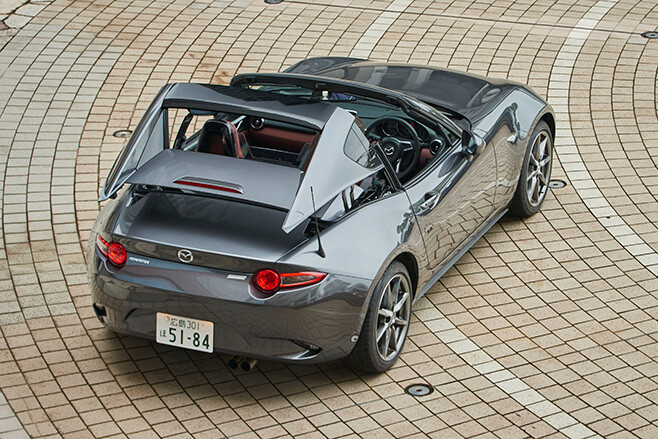 THE WHEELS REVIEW
NECESSITY might be the mother of invention, but for the Mazda MX-5 RF (the “RF” stands for Retractable Fastback), it delivers a new solution to an old problem: How to make a folding hardtop convertible desirable.

Design chief Masashi Nakayama says the latest-gen convertible’s shorter wheelbase doesn’t have the space to package the roof system from the previous RC Roadster Coupe without both uglifying the line of beauty and severely curtailing an already tiny luggage capacity.

The answer was probably staring at his teenage self, because the 1977 Ferrari 308 GTS (star of the 1980s-era TV show Magnum PI and a pin-up car for many bedroom walls) provided the inspiration. The RF’s flying buttresses – those flowing rear pillars – were born after exterior designer Masanori Minamisawa sketched a sleek silhouette over an MX-5 convertible during a hardtop styling proposal meeting in June 2013. It was an elegant solution, since the buttresses allowed for a near-vertical rear window and two-piece roof to concertina neatly into a tight package. Housing the motors used to stow the roof proved painstakingly complex. 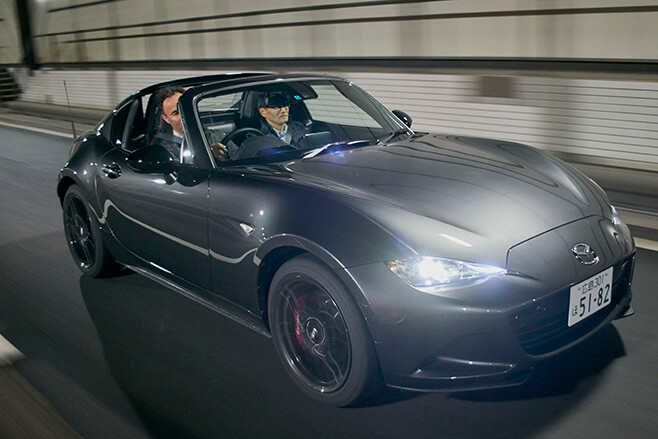 Fresh sheetmetal is used aft of the doors, including the roof panels, rear guards (but not the fuel flap) and bootlid – and all stays within the convertible’s footprint.

Mazda predicts that more than 50 percent of MX-5 buyers will fall for the Maranello apperanza, and that’s despite an assortment of minor compromises – an extra 45kg, a higher centre of gravity, a slightly smaller circa 130-litre boot, and a considerable $4K price hike compared with the 2.0-litre ragtop equivalent (unlike the Roadster, there’s no 1.5L RF for now).

The RF does usher in new-to-series driver-assist systems including blind spot monitoring, rear cross-traffic alert, and lane departure warning (all should make their way into the Roadster soon), as well as appreciably more sound deadening and improved tin-top security.

The latter benefits are crucial, since Hiroshima hopes they will lure coupe buyers who’d never otherwise consider an MX-5 (something at which the RC failed miserably).

There is certainly something more flash in the newly Nappa leather-clad GT-spec RF we sampled through Tokyo’s peak-hour traffic. Roof down at a pull of a button at speeds up to 10km/h, much of the big-sky convertible feeling remains intact, aided by a rear window that drops away to gently usher in the outside world. Yet there is less buffeting, and the cabin is palpably quieter with the top back in place. Is the cabin as hushed as a regular car, though, as Mazda claims? Maybe compared with a CX-3, but tyre and road drone are still constant companions.

More importantly, however, in an all-too-brief 70km round trip to the Japanese capital’s docklands over roads that are smoother than Justin Trudeau, the drive at least confirmed some things were not lost in translation – the regular ragtop’s intimate steering, taut agility, eager mid-range oomph, and alluring lightness are all there. All, thankfully, are core to this tin-top’s appeal. The donor car’s near-50/50 weight distribution carries through too, by the way. According to chief engineer Nobuhiro Yamamoto, the implementation of revised front dampers (with increased input stroke), a more rigid front anti-roll bar, and a smoother rear suspension action combine to deliver the expected MX-5 characteristic feel and response behind the wheel. The early signs are positive, if not definitive.

The biggest surprise is the slickness of the six-speed manual gear shift’s action, making this one of the sweetest versions yet.

Still, it is the RF’s beguiling looks, with those audacious flying buttresses, wide-hipped proportions and lovely detailing that leaves a lasting longing, similar to the allure of the late 1960s-era Datsun Silvia, the Toyota 2000GT, and the first RX-7.

In the case of the MX-5 RF, necessity became the mother of beauty. Isn’t that the point of a coupe?