WHAT IS IT?
A visual punch in the face, that’s what. AMGs have always sat at the angry end of the design spectrum, but the GT R’s wider and lower bodywork takes the eyeball assault to the next level. As it should too, given the R is the hardest, fastest and most track-focused variant yet in the rapidly expanding AMG GT family. It’s also a rival for the mighty Porsche 911 GT3 RS, so it carries big expectations.

WHY ARE WE DRIVING IT?
Because lurking beneath that hulking green paint are a bunch of AMG firsts such as active aerodynamics, four-wheel steering and a nine-stage traction control system. This isn’t just an AMG GT S with more grunt and less weight, but rather a peep into the future of AMG where technology reigns. MAIN RIVALS
The Porsche 911 GT3 RS is the most logical rival in philosophy and price, but in layout and four-wheel-steer agility, the GT R is more like a cut-price Ferrari F12 tdf. If having the engine in the middle is more your thing, Audi’s brilliant R8 V10 Plus is another rival, as is the McLaren 570S and Ferrari 488.

THE WHEELS VERDICT
It was almost guaranteed that the GT R would deliver pulverising acceleration, greater agility and a brilliant V8 soundtrack, but while its on-track performance shows the R has the talent to rival the 911 GT3 RS, the biggest surprise is how much more engaging and capable it is as a road car. THE WHEELS REVIEW
This story started months ago, in a dimly lit, whisper quiet room in AMG’s Affalterbach HQ. There, a silver cover gripped tightly in his hand, stood AMG boss Tobias Moers, a boyish grin spread across his broad face having just shown me his latest creation – the bright green, track-focused GT R. It was a strangely intimate, and highly exclusive opportunity (Wheels was the first in the world to see the car) and one that couldn’t be further away from what I’m experiencing now.

I’m in Portugal, at the rather daunting Portimao circuit and the GT R’s narrow windscreen is being peppered with small rubber bullets, shot from the back of another GT R 10 metres up the road. It’s driven by AMG hot-shoe Bernd Schneider, and his wide green rump kicks and bucks as we slipstream down the long straight, the track’s peppered surface bumpy enough to have the traction control light blinking at 246km/h. 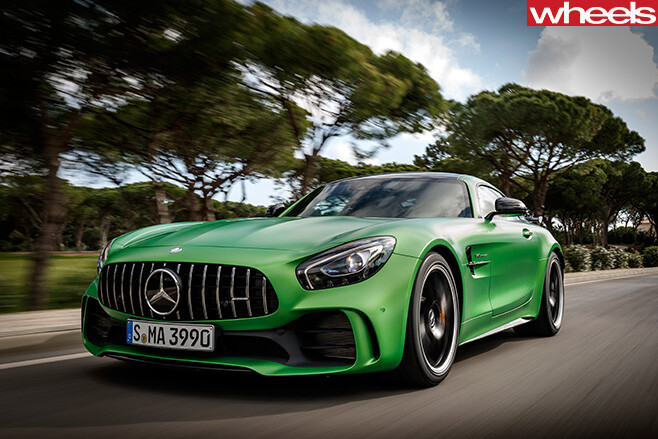 It’s a fast, visceral and terribly exciting experience, but that’s not unexpected.

In the rapidly expanding AMG GT family, the R is the most track-focused and the most hardcore. It’s also infused with the most technology, thanks to a bunch of AMG firsts like active aerodynamics (designed to suck the car into the road at speed), four-wheel steering and a 9-stage traction control system, nicked from AMG’s GT3 race car.

There’s a lighter dual-mass fly wheel too, and a redesigned active exhaust system now partially made from titanium to save 6kg.

Even the 7-speed dual-clutch gearbox copped an overhaul, with a longer first, shorter seventh and lower final drive to improve response and deliver faster, crisper shifts.

The result is ‘push you back in the seat’ levels of grunt (0-100km/h is a claimed 3.6sec) but it’s not the straight-line shove that dominates the on-track experience. It’s the grip.

There’s a larger contact patch than before too, with lighter, forged alloy wheels shod with sticky Michelin Pilot Spot Cup 2 rubber measuring 275/35R19 up front and 325/30R20 out back. 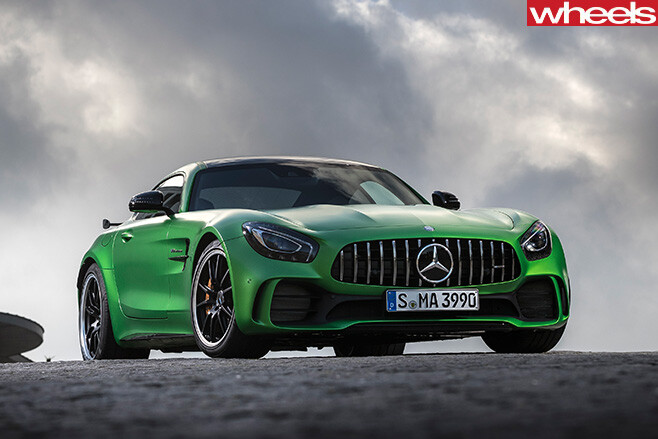 All this means that unlike its GT S sibling, which can be spikey at times and demands respect, the GT R can be pushed hard with confidence. It telegraphs understeer and oversteer nicely, the optional, and huge carbon ceramic brakes (402mm front and 360mm rear) are mighty, and there’s a greater sense of agility provided by the four-wheel steering system, which makes itself felt most on corner entry. Controlled by two electro-mechanical actuators that replace conventional control arms, the system can alter the direction of the rear wheels by 1.5 degrees to improve low-speed agility and high-speed stability.

The steering’s better too courtesy of a faster variable rack, which combined with the wider track, has enhanced turn in response and front-axle feel. It’s still not oozing with communication, bit it’s certainly clearer in its feedback than the GT S, and the weighting is nicer in all four driving modes (Comfort, Sport, Sport+, Race).

And have I mentioned the noise? I doubt there’s a better-sounding turbocharged V8 in existence. Full throttle upshifts are hammered home with a deep V8 crack, and while the gearbox isn’t quite as fast or intuitive as Porsche’s PDK unit, downshifts deliver a wet gurgle on the overrun that sound as though the engine is gargling chainsaws. It’s brilliant. The only real gripes fall to the interior ergonomics. While the start button and Drive Select dial fall easily to hand on the centre console, the other functions, and especially the gear lever, are finicky to reach.

Where the GT R surprises most, though, isn’t on the track, but on bumpy Portuguese roads. Given its performance bent, and the brutal, brittle ride of the GT S, I was expecting the GT R to be bone-jarringly firm, yet this is the best-riding GT to date. Even in Sport +, which was previously reserved only for the smoothest surfaces, the GT R has a compliance lacking in its lesser siblings. It allows you to exploit all of that extra grunt and grip without the worry of being bounced off the road, and is the key to the GT R’s appeal. As fast, entertaining and exciting as it is on a circuit, the GT R’s greatest achievement is how it performs in the real world. It has a polish, a sense of confidence and a multi-faceted level of ability lacking in any member of the GT family. It is, quite simply, the most complete AMG yet.