The fifth and final model to complete the Mercedes-Benz E-Class family alongside sedan, Estate, Coupe and All-Terrain. Just two variants will initially be on offer including the most affordable E300 and this; the E400 4Matic.

Finding an Australian audience for convertible cars of any type has always proved a challenge regardless of the brand, but Mercedes has long held a principle that if it can offer its customers more choice then it will. If it can perform as well as its siblings in the E-Class range, particularly its closest relative; the Coupe, then the drop-top version will be another compelling family member in the company of some high achievers.

The BMW 640i convertible is a little more expensive but beyond that there are no clear competitors that match the Merc on price, performance and size.

It’s unlikely anyone is cross-shopping the Ford Mustang GT convertible with the Mercedes, and Maserati’s Gran Cabrio competes in another niche of a very different price bracket. If you’re after a four-seat convertible in this price range then you had better hope the E-Class convertible is a decent machine.

As a coupe, the E-Class is an extremely strong performer despite clamoring for space and attention in a busy Australian luxury car market. But offering a convertible version has always posed a risk of losing the taught characteristics of a hard-topped sports car. But the E400 Cabriolet manages to translate a majority of the Coupe’s driving dynamics into a look-at-me drop-top with only minimal compromising of its manners.

Not only does it lose little in the way of driving enjoyment, the recipe of silky six coupled to grippy all-paw traction makes more sense for a car in which tyre-squealing powerslides would appear uncouth to the neighbors.

WITH top skinned in tin, the Mercedes-Benz E400 Coupe strikes an admirable balance of typical Benz everyday tractability and practicality for the day-to-day grind, and sporty effervescence when the B-road beckons, wrapped up in knee-weakening looks, but many an accomplished coupe has fallen foul when a can-opener has been taken to its roof.

Fortunately, that certainly isn’t the case with the new Mercedes E400 4Matic, which now joins the E-Class range alongside its sedan, Coupe, Estate (wagon) and All-Terrain brethren. Firstly, the 4Matic all-paw transmission, which we struggled to see the relevance of when bolted under the coupe, suddenly makes more sense when managing the footwork of a convertible. Mercedes has convincingly proved that rear wheels alone are more than capable of dealing with the 245kW/480Nm on tap from the E400’s 3.0-litre V6 turbo, but while coupe drivers may occasionally aspire to a little loose tail action, top-down motoring is all about elegance and composure. And that’s precisely what the rag-top E400 offers.

Its nine-speed automatic transmission predicts gear-changes with eerie intuitiveness, the reported zero to 100km/h dash of 5.5 seconds is entirely believable, its steering has lost nothing of the fluidity and precision of the coupe and the traction of four-wheel drive makes every one of its kilowatts accessible without breaking a sweat. 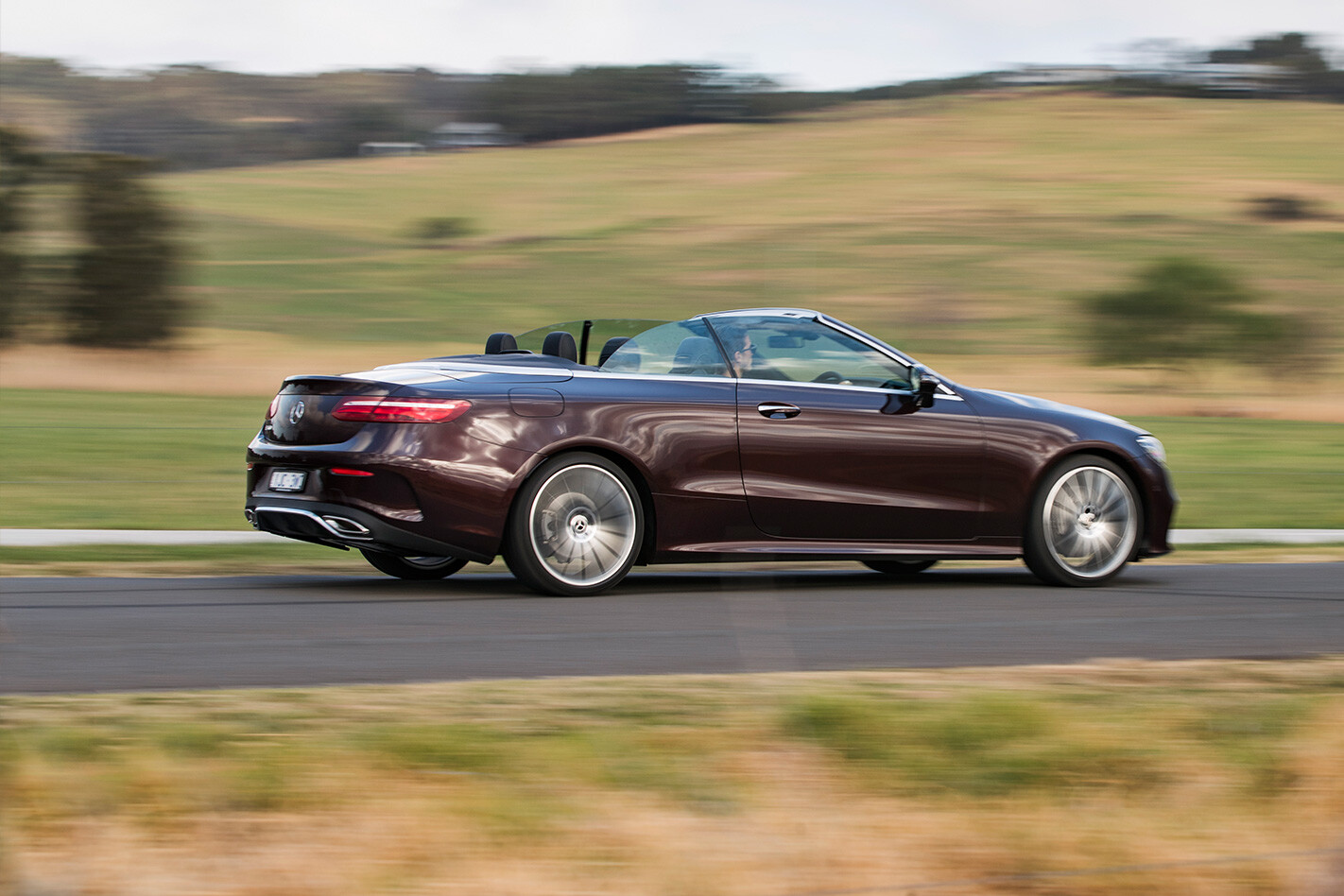 A little column shake over uneven surfaces is the most obvious symptom of its decapitation but otherwise, the Cabriolet is a fun and lively companion for a classic Victorian cross-country road trip.

Occupant comfort scores highly as well with Mercedes’ Airscarf front passenger neck warmers that are as comforting as a hug, complemented by hardcore seat heaters that can actually sting on their most radiant setting. 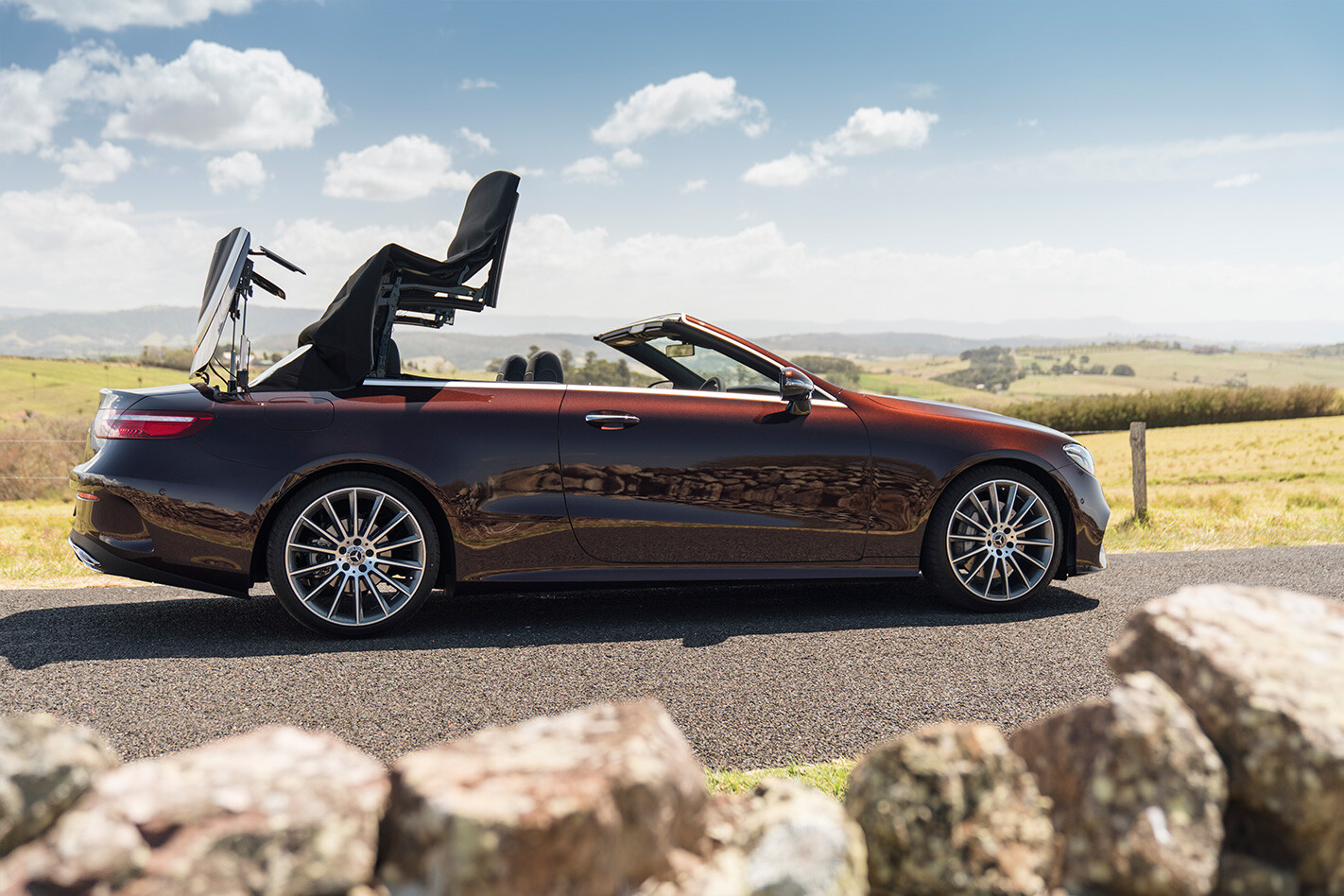 With the roof stowed the E-Class Cabriolet offers a surprisingly calm cabin but that serenity can be enhanced with an electrically folding wind diffuser. The device is very effective in cutting cabin wind further but cannot be raised without an aerofoil that simultaneously extends from the top of the windscreen. The secondary wing dramatically increases wind noise and spoils (pun fully intended) the cabriolet’s good looks.

The extensive selection of comfort kit allows roof-down fun to continue even when the weather tries its hardest to intervene, but when the fabric top must be closed the cabin offers impressive noise and heat insulation from the elements and clever features such as rear seat interior lighting sewn into the roof remind you you’re in something premium. We also managed to get it to operate at nearly 70km/h which is high for any convertible, especially a parachute-topped fabric roof. 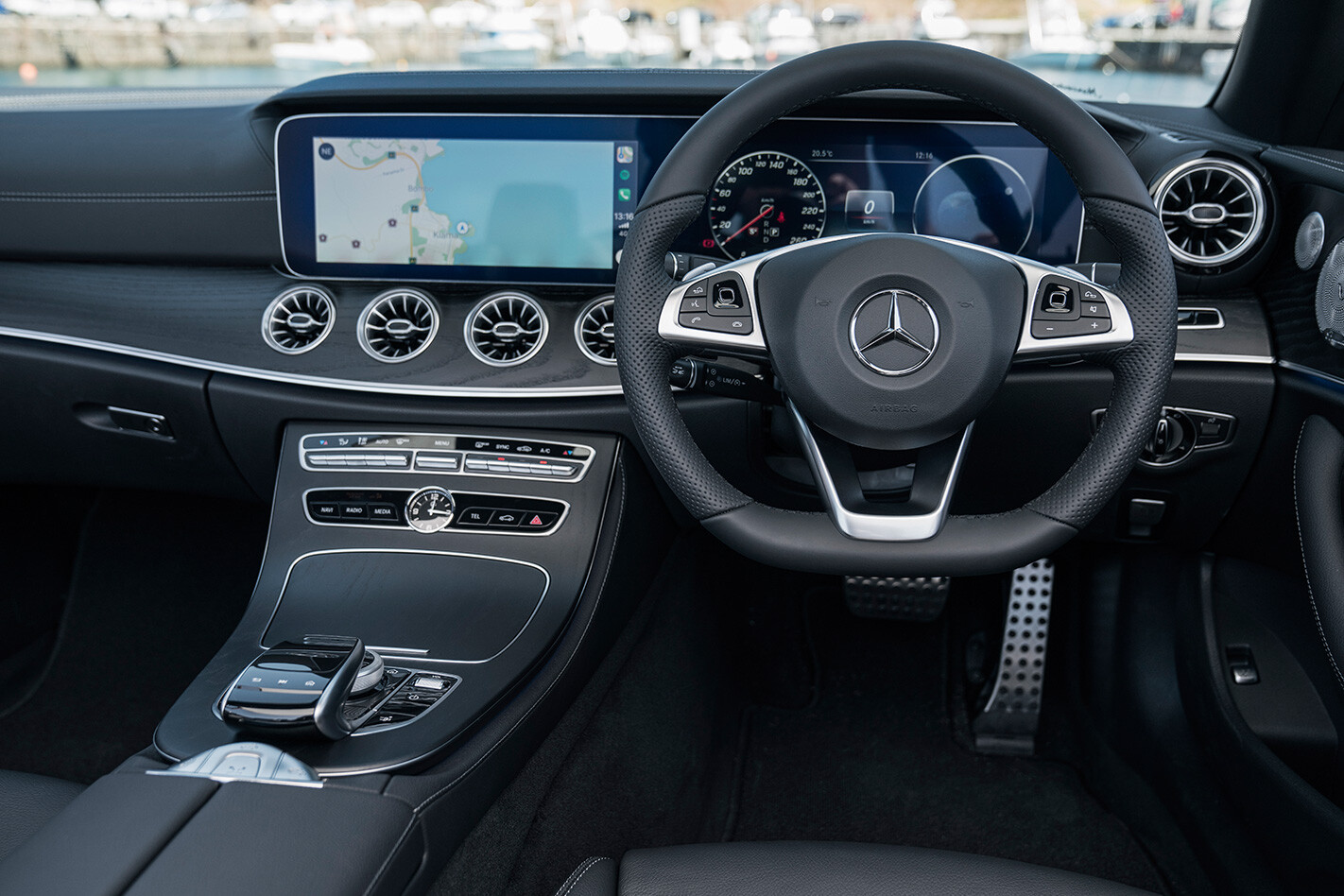 Speaking of which, the E400 Cabriolet carries a $12,000 premium over its equivalent Coupe sibling and while it’s relatively small as a proportion of the initial outlay, that’s still a lot of spray tans.