WHAT IS IT?
An advanced supercomputer, disguised as a large luxury sedan. This is the tenth-generation of the Mercedes-Benz E-Class, and the boffins from Stuttgart have not only made it lighter, larger and more efficient, but crammed it with class-leading, semi-autonomous tech.

WHY WE’RE TESTING IT
To see if Merc’s claims that this new E-Class represents a “jump of two generations” is accurate. Plus, any car that claims to supersede the iconic S-Class for cutting-edge technology deserves a thorough test. 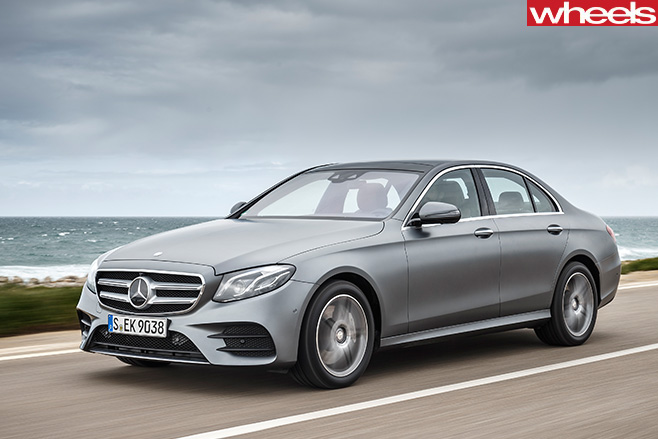 THE WHEELS VERDICT
Move over S-Class, Mercedes has a new technology flagship. This tenth-generation E-Class is not only more comfortable, better looking and better to drive, but sets new benchmarks for semi-autonomous tech.

PLUS:  Raises the bar with cutting-edge tech; luxurious interior; oodles of standard equipment; pleasing road manners
MINUS: Oz not getting some tech; wind noise; more expensive

THE WHEELS VERDICT
I’VE been dead for quite a while now. Pretend-dead, that is. I’m hurtling along a Portuguese freeway at 120km/h and two minutes ago the bearded German sitting next to me said to do the most peculiar thing.

“Now is time for some theatre,” he smiled through his whiskers, which are so long they tickle the top of his name badge. It reads Constantin. “I ask you to have a heart attack.”

He doesn’t seem to care that I’m meant to be driving. Or that our sparkling new Mercedes is approaching a right-hand bend at 33 metres per second. 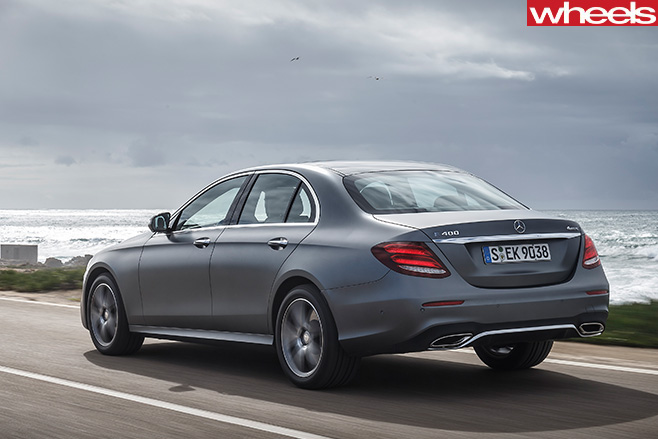 So in an act of blind trust, I throw my hands in the air, writhe in mock pain for a few theatrical seconds, then slump in my seat, dead. I briefly wonder if the spittle in the corner of my mouth is a step too far, or if Constantin will notice it, before the steering wheel moves. It steers us into and through the corner. No fuss, no loss of speed. We don’t even stray from our lane.

The same thing happens at the next curve, this time a left. It takes 30 seconds for the car to notice I’m not in control. It flashes a visual warning on the dash, telling me to take the wheel. I don’t.

Another bend, another 30 seconds, and the car begins to bong, rhythmically. Bong. Bong. Take. The. Wheel. Again, I ignore it.

Then we gradually start to slow. At 60km/h the hazard lights come on. Then we come to a complete stop.

Welcome to the new Mercedes-Benz E-Class, a car so infested with technology and binary code that this review could just as easily fill the pages of PC Monthly.

In fact, this tenth-generation E-Class is so clever that it even outmuscles Merc’s traditional technology flagship, the significantly more expensive S-Class. Kind of a big deal, then. 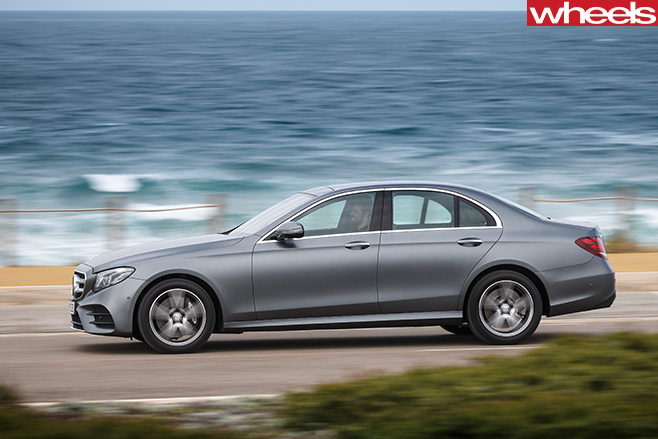 The system I experience with Constantin is the latest version of Merc’s Drive Pilot, which moves the German brand a step closer to full autonomy. With all the sensors and gizmos switched on, the E-Class can now follow another car at speeds up to 210km/h, change lanes autonomously and even drive itself on roads without clear lane markings at speeds up to 130km/h.

It works too. On the highway the E-Class steers itself through gradual bends with precision, maintains and changes its speed without fuss, and even slowed for and drove through a narrow toll booth all of its own accord. All I had to do was touch the steering wheel every minute or so.

It would be wrong to think this means the E-Class is verging on fully autonomous, though. It’s not. Shadows and overhead signs can cause the occasional hiccup and the Drive Pilot’s automatic steering system strays from its lane on tighter corners. So instead of turning on the systems, taking your hands off the wheel and relaxing, you have to constantly monitor the car in case it slips up. That said, on open highways it’s bloody impressive.

The auto lane change – operated by indicating for more than two seconds at speeds above 80km/h – soon becomes second nature, too. Benz implies this system is superior to the one used by Tesla, which lacks the extra rear-facing camera fitted to the E-Class that checks your blind spot.

And Benz has vastly improved the Drive Pilot’s restart function, which will now stop and restart the car automatically in heavy stop-start traffic even if you’ve been stationary for up to 30 seconds. The old system required the driver to intervene after just three seconds. 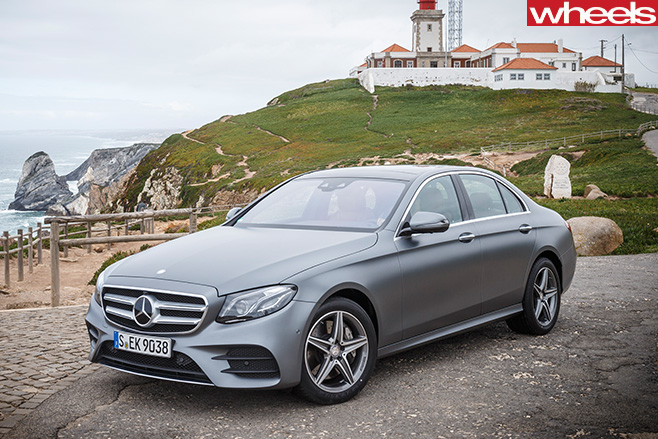 Even better news is that, despite some initial uncertainty about legality and compliancy, all of this semi-autonomous tech will be standard on every E-Class when deliveries begin in June. There is some tech we won’t be getting in Australia, but the company has confirmed most of the headline systems are coming our way.

And don’t fret that Merc was blinded by its pursuit of electronic wizardry and forgot about good old-fashioned mechanical engineering. The E-Class drives like a Mercedes should.

Built on the same Modular Rear Architecture as the S-Class and C-Class, the E-Class is longer, lower and narrower than the car it replaces and rides on a wheelbase that’s grown 65mm. Track widths have increased front and rear while weight is down marginally, by about 50kg. And that sleek new body, which looks eerily similar to both the C and S-Class, delivers an impressive 0.23 coefficient of drag.

A suite of petrol and diesel engines will be offered, all paired with a nine-speed automatic, with the E200, E220d and E350d available from launch in July.

The E200’s 135kW/300Nm turbo four and the E350’s 190kW/620Nm oiler are both carryover engines, but the E220d’s 2.0-litre unit is all-new. Taken from Merc’s new OM625 diesel family, this 143kW/400Nm unit boasts aluminium cylinder head and crankcase and is quiet on start-up, spins eagerly and delivers a nice blend of performance and efficiency, with a 3.9L/100km combined fuel consumption claim. 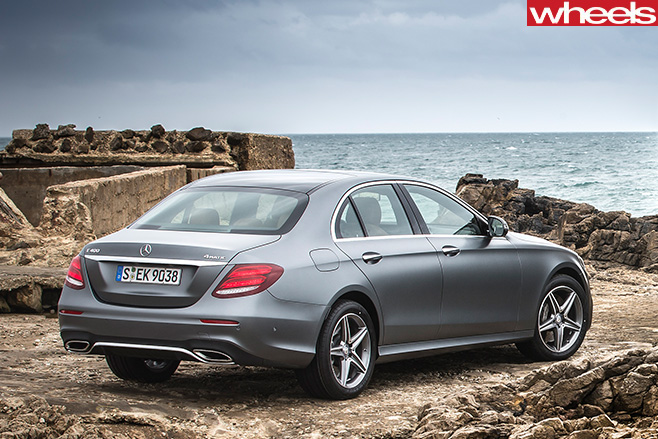 This will be the first Aussie E-Class to be offered with four-wheel-drive, and to prove its credentials Benz decided our first taste of the E400 should be on Portugal’s famous Estoril race circuit.

It’s a punishing track, with long straights, tricky high- and low-speed corners and heavy braking zones, but the E400 applies itself well. The steering is direct, the chassis nicely balanced and there’s plenty of grip, which gives you the confidence to get on the throttle early. The V6 petrol is strong and even emits a nice gurgle on the over-run.

One noticeable negative is a rustle of wind noise at the top of the windscreen, which intrudes into an otherwise hushed cabin. It’s an annoyance that plagues every E-Class we drive, especially when cruising on the freeway, and Mercedes is aware of the problem. “Oh yes, that’s because of the sunroof,” says an engineer. “The cabin is so quiet now that you hear sounds you wouldn’t have before.”

Entry-level E-Class variants have a steel coil suspension set-up with variable damping as standard, but everything from E300 up ride on Merc’s multi-chamber self-levelling air suspension with four modes: Comfort, Eco, Sport and Sport+. Yet even in its firmest and most aggressive setting, there’s no escaping the E400’s heavy emphasis on luxury and refinement over razor-sharp dynamics. A BMW 5 Series remains more of a driver’s car.

What the E400 does do, though, is provide a tasty starting point for the upcoming AMG E43 and the even more bonkers E63, which will be fitted with AMG’s 4.0-litre twin-turbo V8, tuned to produce about 420kW. 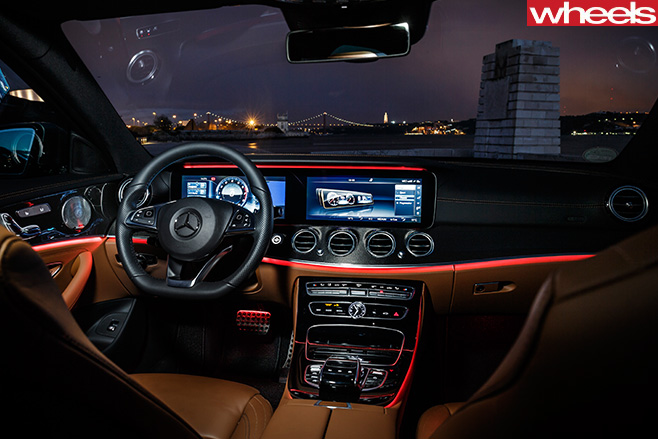 Where the E-Class really excels is with its interior. The family resemblance to the C-Class and S-Class is again obvious, but there’s a beautiful sweeping dash and the piece de resistance is the enormous twin-screen digital display, which will be standard on all Australian E-Class variants.

Dubbed Command Digital Instrument Panel, the display consists of two incredibly thin 12.3-inch HD screens that are fully configurable, with drivers able to choose between three designs: Classic, Sport and Progressive. It’s a breeze to use, thanks to two mini-touchscreens mounted on the steering wheel. You operate them by swiping your fingers horizontally and vertically, with the left touchpad operating the left screen and vice versa. If that sounds complicated, it’s not. The system is wonderfully intuitive.

Rear passengers aren’t forgotten, either, with a roomy rear bench (knee room is up 6mm) and deeply sculpted seats. There’s a lack of toe room, and the 530L boot is 10 litres smaller than before, but these are small complaints in an otherwise convincing cabin.

Then there’s the price. Mercedes Australia has worked hard to increase the spec of local models, and fitted the twin-screen display and Drive Pilot system as standard, but says this will result in a small price increase.

All things considered, it seems a fair trade. This latest E-Class is not only an improvement in style, space and comfort, but sets a new tech benchmark, both for its class and for Mercedes as a brand. Your move, S-Class.