The Skoda Kodiaq - Skoda’s first full-sized SUV - could be a big seller in Australia, so we got in early to get a taste.

WHAT IS IT?
Skoda’s first full-sized SUV – the mostly hatchback Yeti not really counting here – which will arrive in Australia next year complete with standard all-wheel drive and pop-up third row seats. Underneath it’s another remix of the familiar VW Group MQB architecture. Australia will get a simplified model line-up with just the 132kW 2.0-litre TSI available from launch, and a 140kW 2.0-litre TDI diesel following some way behind. All our versions will also come with both seven seats, all-wheel drive through a part-time Haldex system and a seven-speed DSG twin-clutch gearbox.

WHY WE'RE TESTING IT
This is new ground for Skoda, and a car particularly well suited to Australian tastes – this could be the brand’s first big hit down under. Although spun from the same familiar MQB model architecture as the Octavia and Superb – and indeed most stuff that VW Group makes these days – the Kodiaq has the neat USP of those pop-up third-row seats. It’s set to launch in a market segment filled with tough competitors, but if Skoda can price (and equip) the Kodiaq well, it stands an excellent chance. THE WHEELS VERDICT
Much about the Kodiaq is familiar – it’s as sensible and well-built as pretty much everything else that Skoda produces. But it also offers a brave new direction for the Czech brand thanks to the combination of its crossover design and seven-seat practicality. The Kodiaq is definitely a ramped wagon rather than a rugged off-roader, but it works extremely well on-road and – on the basis of our first impressions – is set to put up a stern challenge to the segment’s established leaders. THE WHEELS REVIEW
Two telling details stood out on the launch of the Skoda Kodiaq. The first was the presentation where Skoda execs introduced us to the company’s new SUV, where we got the full run-down on connectivity, active safety systems, design – inspired by Czech crystal, apparently – and the three-row seating before even passing mention was made of powertrain or chassis. The second came when we got to drive it, with the test routes on the Spanish island of Majorca not including a single metre off-tarmac. On the basis of those two facts alone you’ve probably worked out that this isn’t the sort of expedition-grade off-roader you choose for a trip into the wilderness.

Skoda is definitely pitching the Kodiaq at the lifestyle market, and it’s fair to see it as a bigger alternative for the Volkwagen Tiguan – size wise it pretty much splits the difference between that car and the Touareg. The Kodiaq is another stirring of the pot which is VW Group’s MQB product matrix, but with the neat USP of a pop-up third row of seats. This will be optional in most markets, but standard in Australia. Similarly we’re not going to get any of the smaller capacity engines or the option of front-wheel drive, with all cars coming here having either 2.0-litre petrol or diesel turbo donks, all-wheel drive and the familiar seven-speed DSG twin-clutcher. The third row delivers as expected, stowing neatly under the boot floor when not in use and then popping easily into place. The base of the second row slides, but even moved fully forwards access to the back is a scramble, nor can the third row take an ISOFIX mounting, effectively limiting their use to kids who have grown beyond booster seats. But as these seats tend to be used part-time, that’s unlikely to be a huge issue. The rest of the cabin impresses with strong design and some tough-feeling materials – although with incredibly unconvincing plastic wood trim in the cars we drove. There are plenty of neat design touches, like the Superb the Kodiaq has umbrellas that can pop out of the front doors and the new haptic touchscreen of the range-topping Columbus entertainment and nav system is excellent. Dynamically the Kodiaq has clearly been engineered to satisfy rather than excite. Skoda’s engineers have prioritised ride comfort and refinement; the selectable dynamic modes include ‘Sport’, but even when fully dialled up it’s more ‘lawn bowls’ than ‘slalom skiing’. The cars we drove on launch all had adaptive dampers, which remained impressively pliant even in their firmest mode and stayed composed even when fully softened off. Road and engine noise is very well contained, with only some slight wind-whisper from the tops of the doors standing out for (mild) criticism. 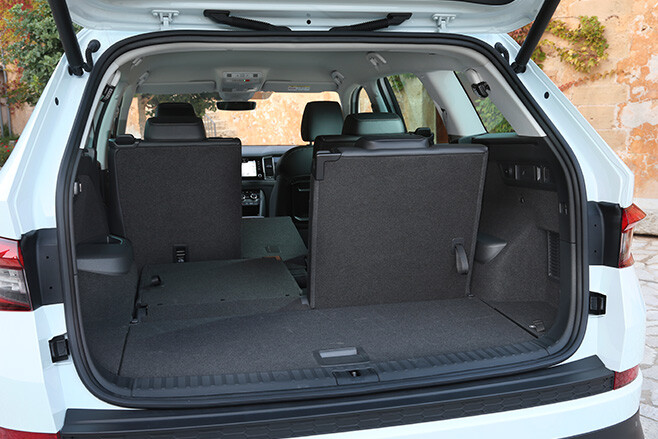 Although it controls its mass well, the Kodiaq feels heavy and slightly ponderous when asked to tackle a twisty road at speed. For the most part, it’s simple physics – the Aussie-spec TSI weighs 1738kg on Skoda’s figures, and the TDI is 1795kg – and although the chassis does a decent job at keeping everything in control it never feels enthusiastic for faster progress, with feel-free electric power steering limiting faith in the front end. Even with Australia only getting the most powerful currently available petrol and diesel engines performance is only adequate, with the 132kW TSI delivering the strange sensation of a hot hatch soundtrack with a much slower rate of acceleration. The 140kW diesel has noticeably more torque, but sounds much coarser when worked hard.

Australian sales of the Kodiaq start in the middle of next year. We’ll only have the TSI available from launch, with the official hope being that the TDI will join the line-up within a year. On first impressions it’s a fine all-rounder rather than the sort of car to set pulses racing, but it definitely puts ticks next to a lot of boxes.