Subaru has gone back the drawing board for its next-gen Impreza, changing nearly everything to give its small car a fighting chance in the most competitive segment in Australia.

WHAT IS IT?
The latest iteration of the Subaru Impreza, which not only promises massive improvements in design, dynamics, comfort and safety but also debuts the Japanese company’s all-new SGP modular platform.

It’s set to land in Australia in the latter half of December this year, with a model range encompassing at least three variants and with sedan and hatch bodystyles. Pricing and precise specifications have yet to be announced, but expect those details to surface in the coming months.

What we do know is that all models will be only be available with a single engine – a naturally-aspirated and direct-injected 2.0-litre flat four with 115kW and 196Nm – and a CVT automatic. Subaru Australia will also equip mid- and high-grade models with the company’s camera-based EyeSight active safety suite as standard.

WHY ARE WE TESTING IT?
The humble Impreza has struggled for market relevance in its current form, with underwhelming mechanicals and soggy handling staining what is otherwise a roomy and dependable small car. But with the transition to an all-new platform, Subaru has gone back to the drawing board to eliminate most of the Impreza’s foibles. It’s an all-new car with only five percent of its components being shared with the current model, and that five percent is comprised of generic bolts, screws and clips.

THE WHEELS VERDICT
Classy and composed, the Impreza has turned over a new leaf. It’s still nothing to write home about when it comes to power and torque, but driving it reveals a chassis that is better resolved and more agile than before.

Add to that an interior that’s no longer wanting for visual appeal and the Impreza should have plenty more showroom pull when it arrives here at the end of the year.

That’s what optimistic parents say when their offspring start listening to Norwegian death metal and dressing in dark colours.

“They’ll grow out of it soon”.

Subaru’s Impreza has been through “a phase” of its own, but one that’s been a little less dramatic and rebellious than the average Nordic-metal-loving teen. In fact, it’s been the polar opposite.

The Impreza, long associated with gravel-spraying Scandinavian flicks and WRC trophies, decided to pop a Valium and mellow out in 2007 when the GH-generation model arrived on the scene. Compared to the car that preceded it, the GH was a coma-inducing small car that ditched the rally-bred design of its predecessor for more sedate sheetmetal and a practical – but dull – hatchback silhouette. Yes, there were fast WRX and uber-quick STi variants to add some spice, but they were akin to squeezing a full bottle of Sriracha over potato and egg salad – bloody hot, but the stuff underneath still wasn’t all that exciting to begin with.

The formula was corrected slightly when a sedan bodystyle was added – which saw the eventual return of wildly flared fenders on a Subie sedan and a suitably oversized wing for the STi – but for the following generation the WRX and WRX STi were shunted onto a different track and divorced from the Impreza range entirely.

The Impreza was back to being atmo-only, and very dull. It was more practical and roomier than ever before, but a passionless, middle-of-the-road offering when compared against small-car segment rivals like the Mazda3 and Volkswagen Golf.

But now there’s a new Impreza heading for Australia. It’ll go on sale in late December but we’ve already driven it in its homeland of Japan, and the first taste is a promising one.

First things first: Subaru has addressed the design. The completely-new Impreza won’t put your eyes to sleep, and some complimentary links can be made between the new Impreza’s design and that of Volvo’s handsome V40.

There’s no bonnet scoop feeding a top-mounted intercooler on this one yet – nor is there likely to be, given the WRX and WRX STI have been divorced from the Impreza model line and Subaru’s 1.6 litre turbo won’t fit in the new Impreza’s chassis – but other Subaru hallmarks like pronounced fenders and a be-winged grille are there.

An extensive glasshouse also remains, though the daylight opening (a design term meaning “the see-through bits”) has been reshaped to enhance the impression of a lower and longer roof. It’s not just an optical illusion though, for the new Impreza measures 10mm lower (and 35mm wider) than the model currently on sale. 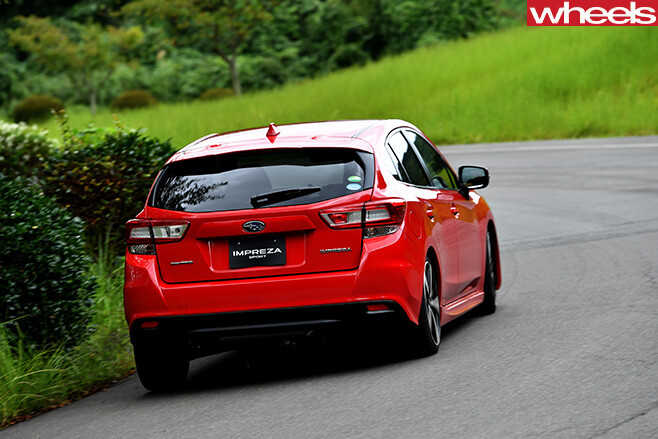 Subaru values vision, and the Impreza continues to use fixed front quarter windows to provide a better view around the wing mirrors and A-pillar, while small portal windows are set into the C-pillar to aid over-the-shoulder vision.

The visual transformation continues inside.

The 2017 Impreza’s cabin loses the cold and clinical appearance of the current model and trades it for a look that’s got a little more aesthetic flair. The execution is greatly improved too, with switchgear that looks and feels premium, a leather gaiter around the transmission selector, stitched leather dash surfaces and a flush-mounted infotainment system.

The part-leather, part-cloth upholstery on mid and high-grade models looks and feels good too, with a supportive seat base – something that’s not always present in modern Subarus. There’s 29mm more shoulder room too, as well as 20mm more space between the front seats.

In the back, the Impreza boasts 29mm more rear seat legroom, and the boot aperture has been widened by 100mm to help you insert your load. 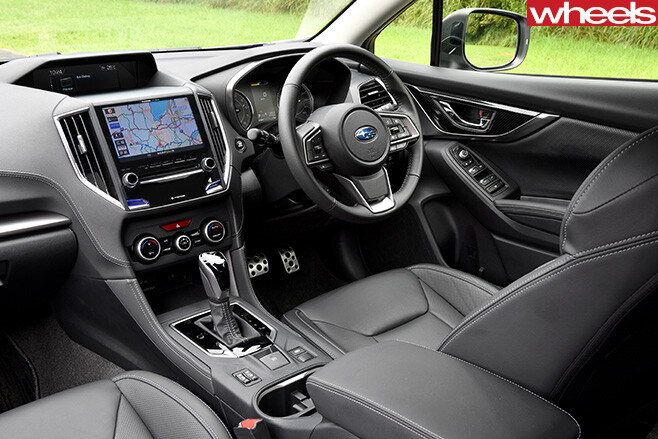 The current Impreza is no dynamic star thanks to soggy handling and a roll-happy chassis, and Subaru knows it. Hence why the company has spent the past ten years engineering an all-new scalable platform that will not only provide the bones for the 2017 Impreza, but all new Subarus going forward.

There’s more high-strength steel too, as well as gussets to provide more strength in areas like the junction between the front suspension towers, firewall and A-pillar.

The result is a car that’s substantially more rigid than before, with a 50 percent reduction in body vibrations. It exhibits substantially less roll thanks to a rear swaybar that’s bolted directly to the chassis rather than the suspension subframe – something that’s more time-intensive and thus costly to manufacture, but Subaru says the payoff is better body control without having to resort to mega-thick swaybars.

It’s got a 5mm lower centre of gravity too, and on the twisting circuit we drove on at the car’s Japanese launch it displayed surprising stability and agility on fast direction changes.

The new Impreza’s steering is accurate and well-weighted, though a touch dead when it comes to feel and feedback. But that could be because the glass-smooth surface of our test circuit was designed for pushbikes, not for pushing small hatchbacks to their limit. An absence of surface imperfections makes that aspect of the drive difficult to assess.

However it wasn’t hard to note a profound difference in grip levels between the 17-inch wheels of the mid-grade Impreza and the 18-inch alloys of its high-grade sibling. The 205-section Bridgestone Turanzas of the former gave up grip much earlier that the 225-section Yokohamas of the latter, and revealed the Impreza’s preference for on-limit understeer. The Impreza’s 2.0-litre flat-four engine might be direct-injected now, but with just 5kW more power and an unchanged 196Nm torque output there’s not much of a tangible improvement from behind the wheel. Acceleration is … leisurely

Australia-bound cars will only be equipped with a CVT automatic, however Subaru promises it’s a more refined unit than the one currently in use.

At low speed, that claim holds true. Work the engine harder, and there’s some faint CVT chain whine from beyond the firewall. Annoying, but at least the CVT behaves like a conventional automatic and rises through pre-defined stepped ratios when you floor the accelerator. Steering wheel-mounted paddles enable some level of manual control too, should you require it.

That said, the rest of the Impreza experience has been dramatically changed, and for the better. It looks like the Impreza grew out of its “phase” after all.