More punch and extra gear are the highlights of an update to the impressive 2017 Volkswagen Amarok ute.

More punch and extra gear are the highlights of an update to Volkswagen’s impressive Amarok ute.

WHAT IS IT?
A German-made, V6 version of the Amarok. The Volkswagen Amarok V6 TDI is part of a model update that incorporates a revised interior and fresh face, but no updates to the sheetmetal.

WHY WE’RE TESTING IT
The V6 has just gone on sale in Australia with a $3000-$4000 premium over the twin-turbo four-cylinder diesel that continues in some models. 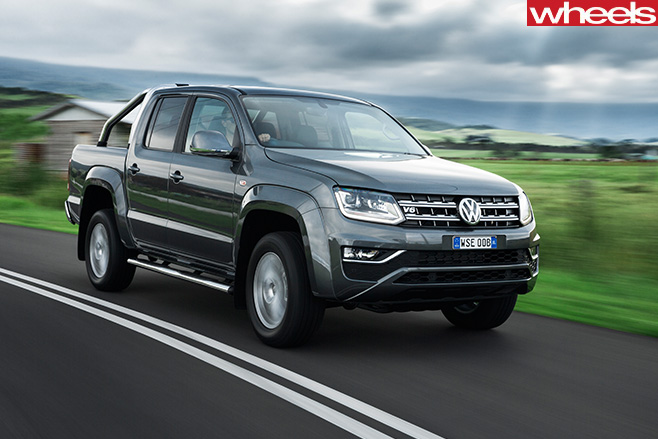 THE WHEELS VERDICT
All the Amarok’s good points now come with an engine better suited to its muscular image. It’s no performance car, but the V6 TDI adds some welcome muscle to a great-driving 4x4 ute package. But some features still aren’t part of the premium price.

PLUS: Strong and smooth engine; great driving position; classy interior; competent dynamics (for a ute!); sizeable tray
MINUS: Missing some equipment, including rear airbags and AEB; busy ride when unladen

THE WHEELS REVIEW
A BIGGER engine and more power. Success in Australia can sometimes be a simple thing, as Holden, Ford and others have established over many decades.

But rarely has that formula been applied to the workhorse ute market – and never with much success; at least until the arrival of the Volkswagen Amarok V6. 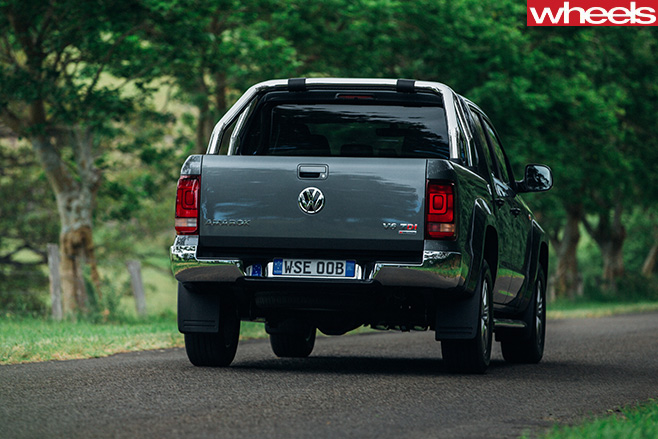 Utilising a 3.0-litre V6 turbo also found in various other Volkswagens and Audis – and even Porsches – the new Amarok flagship arrives with the most power in a 4x4 diesel class dominated by Hiluxes, Rangers, Colorados and BT-50s. There's 165kW available constantly, or 180kW on overboost for 10-second bursts.

It’s a long way from an HSV Maloo (up to 400kW/671Nm) but the Amarok can also tow 3000kg, take up to 911kg in its tray, bounce over rocks and sand dunes, and ford rivers up to half a metre deep. It’s arguably as Swiss Army knife as a car can get.

Yet the same can be said for so many dual-cab utes. They’re multipurpose vehicles, increasingly used as family cars and adventure machines. Enter the V6 diesel, the first in this class since Nissan dropped the V6 Navara in 2015.

That the Volksie V6 delivers its grunt with a smooth, free revving charm encourages the occasional full throttle blast. 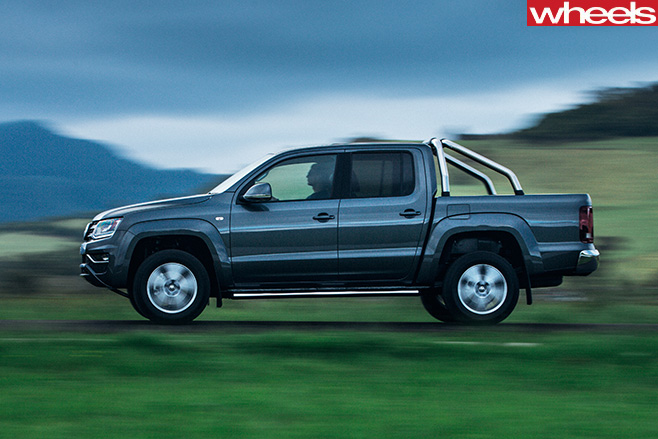 Yet it's the 550Nm that defines the engine. From 1500rpm there's the full force on tap, making light work of steep hills; it’s easy to forget there’s 2.2 tonnes of metal along for the ride.

The eight-speed auto is a gem, too, slipping between ratios briskly and cleanly. It's surprisingly short geared, grabbing fourth well before the 100km/h milestone arrives, so there's rarely a speed where it's fumbling to uncover the engine’s sweet spot.

Despite its low-rev focus, the 3.0 V6 doesn’t mind stretching at the other end. It typically shifts between 4000rpm and 4500rpm, although hold it under brakes before taking off and it’ll wind beyond 5000rpm.

The V6 engine can overboost up to 180kW. When the software sees the throttle below the 70 percent position it extends the torque delivery using the turbo for an additional 15kW for up to 10 seconds. It’s designed predominantly for overtaking between 80km/h and 120km/h. 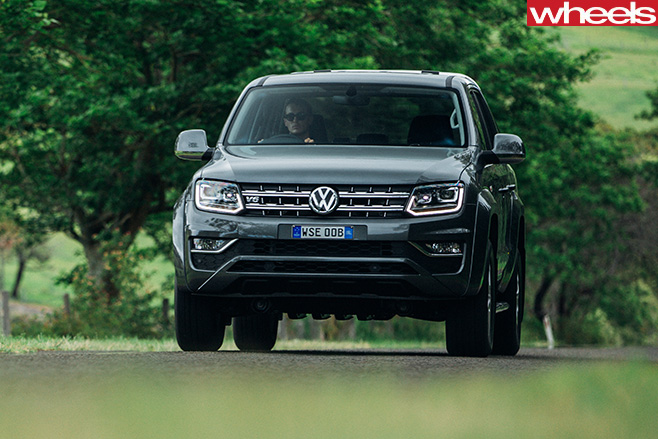 The V6 package also brings bigger brakes; the fronts are up to 332mm – the biggest in the class – and the rears are discs where drums are the norm. It’s not about to out-brake a passenger car, but the Amarok’s anchors felt solid after some high speed punishment.

Dynamically, there’s plenty of ute in the equation, arguably more so because our Ultimate was running on optional off-road 17-inch all-terrain tyres rather than the 19-inch regular hoops it comes with. Launched at tightening bends there was predictable understeer.

Driving through all four wheels all the time – a rarity in the segment – ups the confidence in unleashing the torque on loose gravel or wet bitumen. It’s surprisingly reassuring, let down only by some rear-end bounciness as the unladen tail deals with bumps. 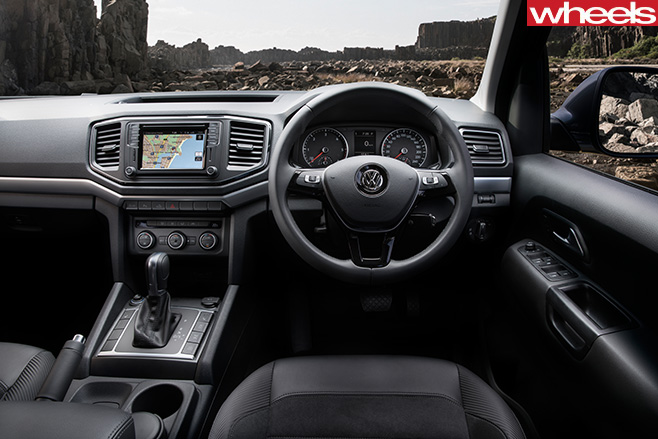 Elsewhere the Amarok is as it was before, with some tweaks. A fresh bumper, headlights and grille look more modern, but the clean sheetmetal is unchanged.

The interior is broad and accommodating, with the excellent front seats and driving position (the steering adjusts for rake and reach) standouts. Rear legroom is average for the class, and there are no rear vents.

The tray is huge and well proportioned, with the ability to carry a pallet between its wheel arches. And with four floor-mounted tie-down points it’s well suited to carrying up to 911kg. 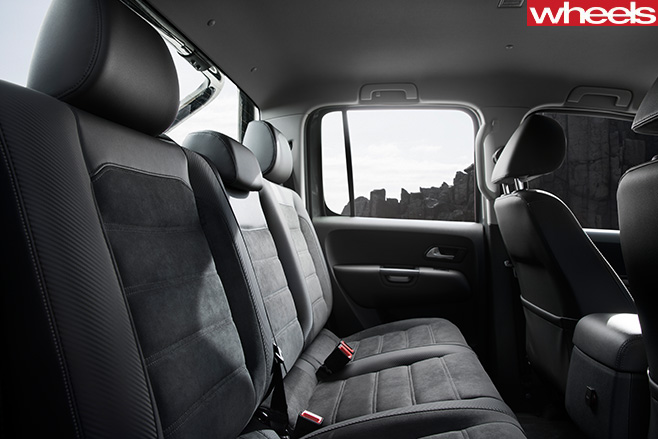 Ultimate ups the wheels to 19s and brings a colour multifunction display in the instrument cluster, heated front seats, puddle lights in the side steps, a plastic tub liner, shift paddles on the steering wheel and a sport mode for the transmission. There’s also a unique chrome sports bar that extends to the rear of the car.

For now the V6 is only available as a Highline or Ultimate, where it replaces the four-cylinder engines. However, expect the V6 family to expand; a V6 Core seems logical and Volkswagen hasn’t ruled out other models to flesh out the price range, especially below the Highline’s start point. Volkswagen will also introduce a flagship Aventura around May, 2017, while a V6 manual joins the line-up later in the year.