Second-gen Tiguan rights many of the practicality wrongs of its predecessor, but is it good value for money?

If I gave you an envelope containing fifty-six thousand dollars, what would you buy? What about a Mustang Ecoboost and some change in your pocket, or perhaps a Mercedes A250 Sport if you want something a little more prestigious?

Want some real muscle? Well Holden wants a mere $54,590 for an SS-V Redline, just sayin’. If you prefer a more delicate touch, then a top-of the line Mazda MX-5 RF GT can easily be had for less than $56k, on the road. The point I’m trying to make here is that $56k is a lot of money, and at that price point your options are extensive.

So why would you drop all of that coin on something as mind-numbingly pedestrian as a mid-sized five-seater SUV?!

This car, the Tiguan 140TDI, is ex-pen-sive! It retails for $49,990, but in this configuration here, with the Driver Assistance Pack and R-Line Pack, will set you back just under $56k. That’s a monumental amount of coin for a medium SUV from a mainstream brand like Volkswagen.

Or is it? Volkswagen reckons its classy second-gen Tiguan has what it takes to rival entry-level SUVs from luxury marques like the BMW X1, Mercedes GLA and Audi Q3. We’ll be the judge of that.

ON PAPER
So what do you get? The headline stats for the 140TDI is a two-litre turbodiesel inline four with 140kW and 400Nm, with a seven-speed dual-clutch automatic taking power to all four wheels. It may be an oil-burner, but it’ll sprint to 100 in a fairly brisk 7.9 seconds.

There’s a lower-output 110kW version of this engine available for less money, though with not as much muscle it’s substantially slower. Interestingly, both the high-output and low-output Tiguan diesels consume the same amount of fuel on the combined cycle – just 5.9L/100km.

WHY IS IT IMPORTANT?
Now, Volkswagen’s new Tiguan marks a massive improvement over the model it replaces. Built on an all-new modular platform, it's now bigger on the inside and packed to the brim with some fancy gear. Combine that with a fresh, modern design both inside and out, plus a semi-premium aura, and it's clear that Volkswagen is gunning for slightly wealthier customers with its new Tiguan. 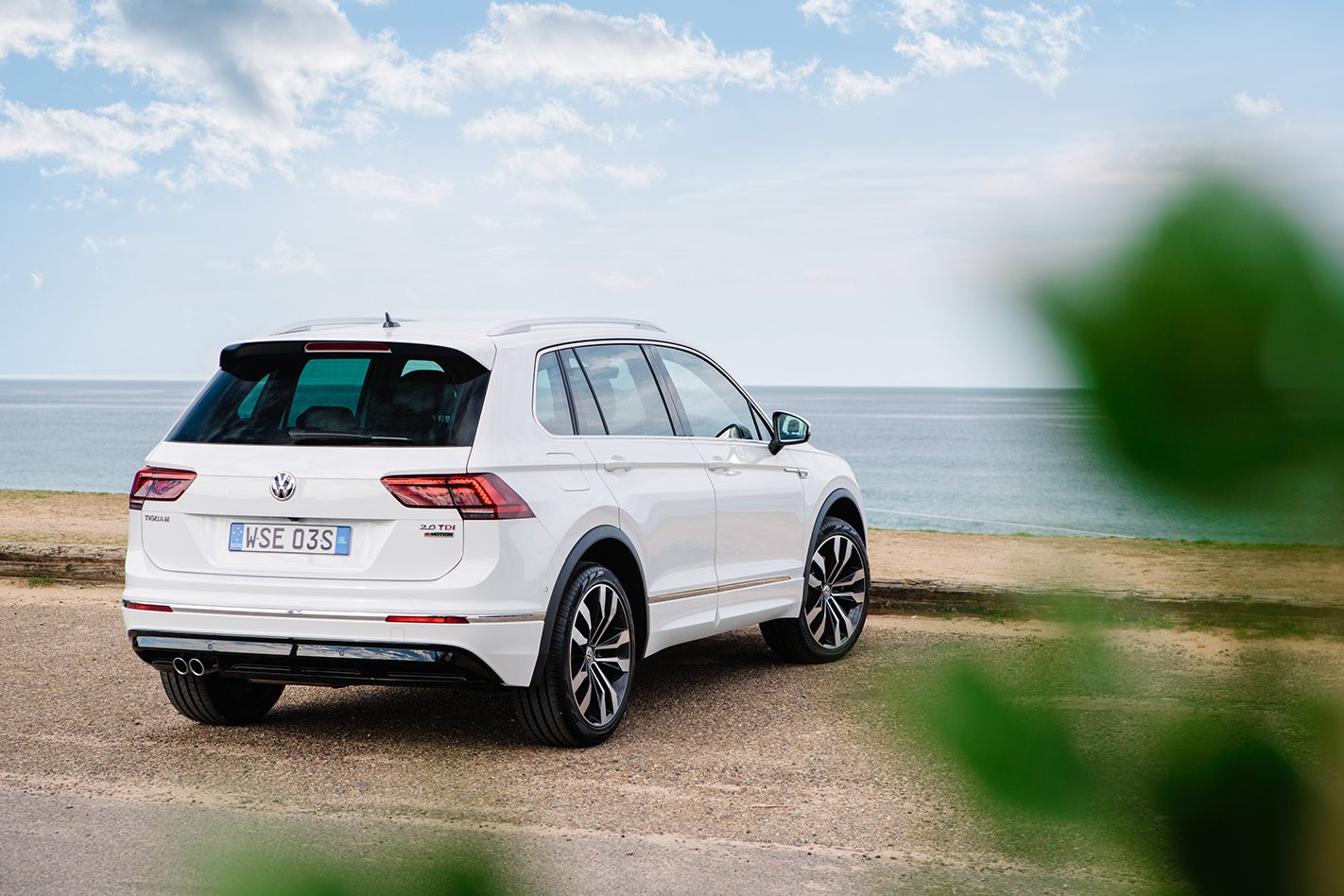 FIRST THINGS YOU NOTICE
Backseat accommodation is hugely improved. There’s also a nifty fold-away tray table for that private jet vibe, and separate climate controls so your backseaters can be in command of their own comfort.

In the car we’ve got here, there’s also plenty of visual wow factor in the form of this reconfigurable instrument panel. Some of the data displayed is kind of useless – like the display that shows you how many degrees your front wheels are turned – but it’s a pretty slick way of showing the driver a huge amount of information. I particularly like the navigation screen, which frees up the centre infotainment screen for your passenger to use.

PLUS AND MINUS
Here's the good stuff: the Tiguan, when specced in this high-grade configuration, looks and feels properly premium.

The responsive infotainment display is feature-rich and also has the benefit of smartphone mirroring, should you want to exploit the extra features of Apple CarPlay or Android Auto. However, with a full-featured integrated sat-nav, music harddrive and digital radio tuner already built-in, there are more than enough features without plugging in your phone.

To drive, the Tiguan 140TDI is, on the whole, rather good. The engine may be a bit gravelly, like all diesels, but it's relatively smooth and pulls strongly thanks to its generous torque curve.

However I’m still not convinced by Volkswagen’s dual-clutch gearboxes. They’re great when you’re in motion, but taking off from a standstill can be jerky and slow as the computer-controlled clutches toss between slip and grip.

Ride quality is pretty good on the large-diameter alloys, though I'd advise spending a little extra to get the optional adaptive dampers. In their most comfort-oriented mode they dial out most of the firmness that the standard fixed-rate suspension has, which is important for your long-distance comfort.

The Tiguan feels a lot more dynamic and nimble than other mainstream mid-size SUVs as well, though that's not as huge of a selling point in this segment. 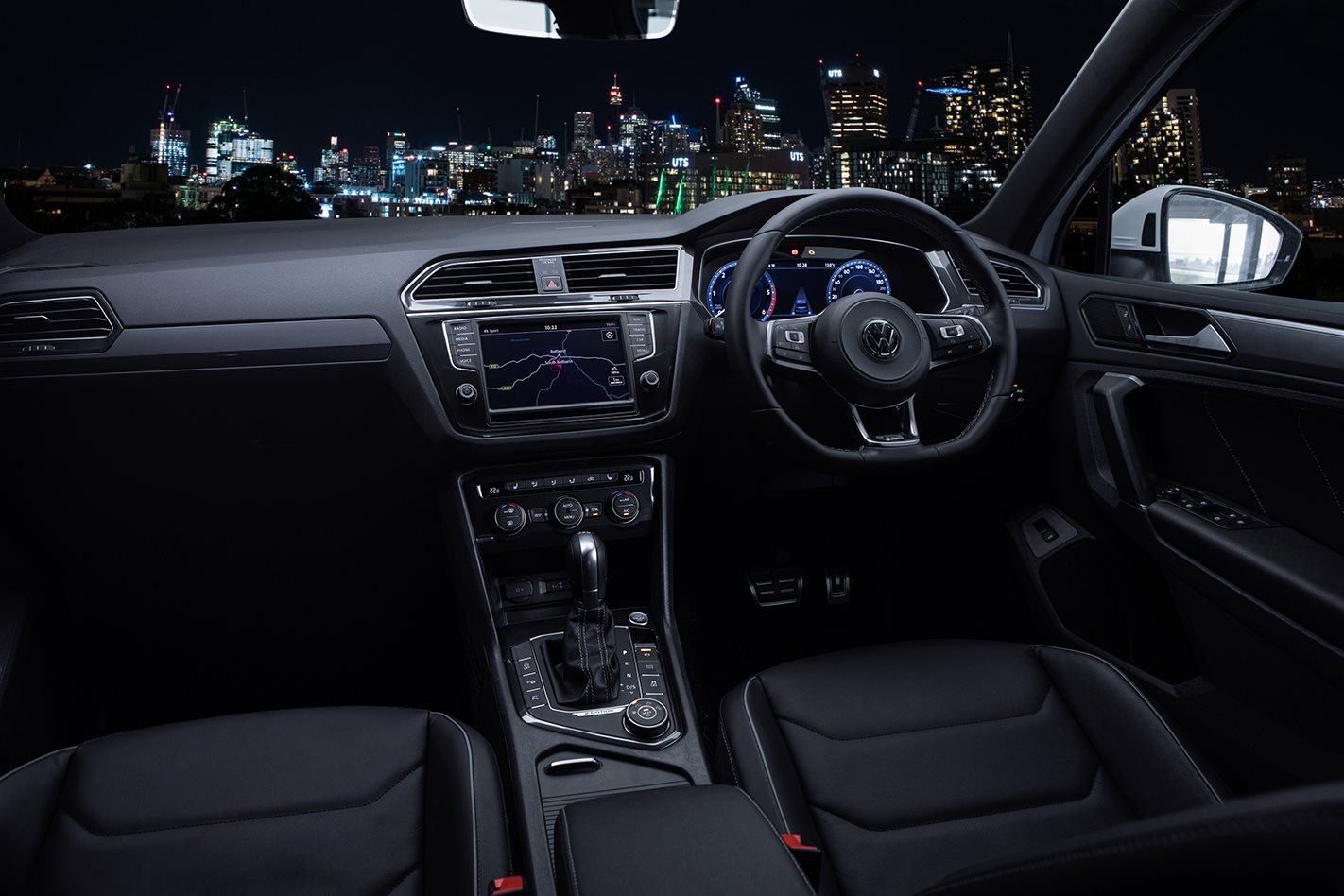 VERDICT
The Tiguan's biggest enemy is its price tag. For the same amount of money as this 140TDI Highline model you could get yourself into seven-seat large SUV, not to mention a V8-powered commodore. The trade-off is, of course, its premium feel and high-end equipment list.

Interestingly, the Tiguan also presents better value-for-money in high-grade models like these, rather than the sparsely-equipped entry-level variants. But even so, $56,000 is still a hell of a lot of money to drop on a five-seater.