IT’S A MASSIVE vote of confidence by a manufacturer to allow journalists to hammer around a racetrack at a car launch, and while it’s something that’s expected of high-end metal like Porsches, RS Audis and BMW M cars, it’s a rarer event at the cheaper end of the performance car spectrum.

What’s even less common is when car company PRs devote an entire day to on-track driving, with no minders sitting in the left seat to reign drivers in, no pace cars, no chicanes to keep speeds low and no instructions beyond “go forth and drive”. Hyundai’s Australian i30 N launch was one such event.

The driver briefing was, well, brief. The summary of instructions were thus – wear a helmet and long sleeves, don’t have the windows half-way up, and keep speed in the pits to under 40km/h. See flashing red lights from the marshalling bunkers? Then end your lap early. No words about keeping an eye on engine temps, no comments on capping outings to a certain number of laps – no attempt, in fact, at shortening the leash on a bunch of motoring writers. We assume Hyundai’s corporate insurance policy is pretty robust. 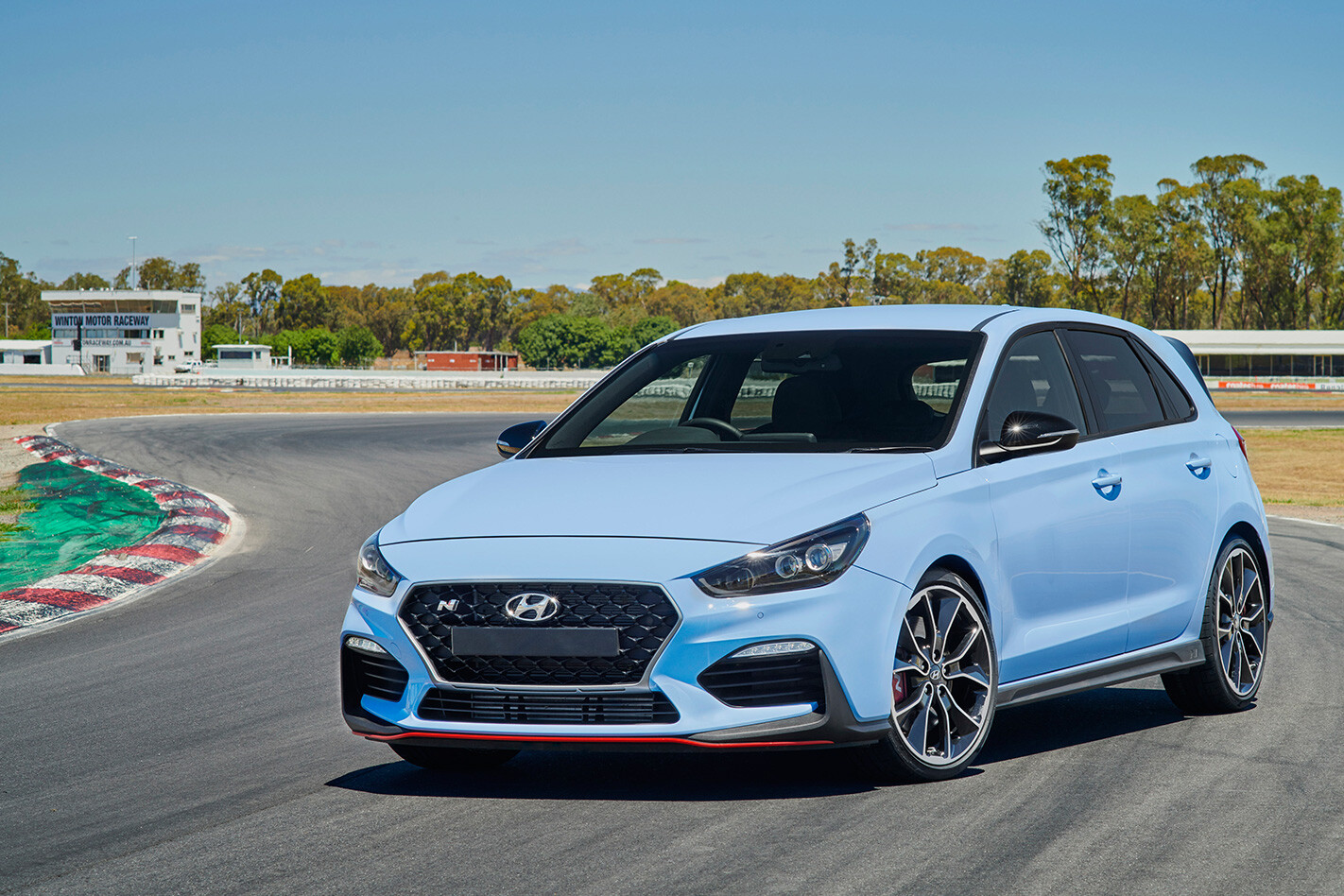 A refreshingly liberal approach to a car launch. But then again Hyundai is keen to emphasise that the Hyundai i30 N is not your average hot hatch. Remember their announcement about honouring the i30 N’s factory warranty even if you participate in the odd track day? That’s something Porsche does for the 911 GT2 RS. Even Mazda will void your warranty if it figures you’ve taken your MX-5 to a circuit for a bit of a blat, and Nissan demands that its mighty GT-R receives a post-track inspection in order to satisfy the Ts and Cs of its warranty. Hyundai makes no such stipulation.

Back to the i30 N. Hyundai’s PR people looked suspiciously relaxed, but we aren’t ones to question the offer of free track time. Helmet donned and sleeves rolled down, we head out in a bog-standard $39,990 example, ignoring specced-up Luxury pack cars that add frills, but not speed.

From the outset, the N feels at home in this environment. Leaving Winton’s pit lane and heading toward the left-right chicane at the end of its modest straight, its roomy cabin and low-mounted seats leave plenty of room for a helmet-clad head and no obstructions for elbows as you saw at the wheel. It only takes half a lap to note the N’s excellent steering. Moving the electric assistance motor from the steering column down to the rack itself gives it a directness and consistency of feel that’s second only to a hydraulic setup, and the faster ratio relative to regular i30s works well to add some extra dynamic distinction between the N variant and its brethren.

Careful engineering of the front suspension geometry (which is also unique to the N) sees the i30 N’s steering axis almost perfectly intersect the centre of the tyre’s contact patch, achieving a scrub radius that’s close to zero and virtually banishing straight-line torque steer. Under hard acceleration the steering wheel does start to pull in your hands when at higher degrees of lock, but it’s minor considering the engine’s meaty 378Nm torque max when in overboost. With no variable-ratio gimmickry to spoil the feel, the i30 N’s steering is as consistent and linear as it is alert and assertive.

Dial up the speed, and the chassis reveals itself to be one that’s stable rather than ultra-darty, with a buttoned-down rear axle that resists breaking free even under big throttle lifts and heavy cornering load. Unlike French options like the 308 GTi and previous-gen Megane RS – not to mention the surprisingly oversteery Focus ST – the i30 N prefers to keep its rear on a straighter path. Does it struggle to rotate then? Not really. If anything, the i30 N’s chassis is closer to neutral than it is to being understeer-prone, and if you’re talented enough to exploit the car’s inertia with a well-timed flick of the steering the rear end will break loose to help point the nose in. It does this a little more readily with the dampers set to ‘Normal’ rather than Sport+, but at the expense of more pitch and roll.

It’s plenty fast without resorting to rally-style tricks though, thanks to that wicked mechanical differential up front. Electronically-controlled and hydraulically actuated, the diff does a stellar job of keeping traction in check when the accelerator is buried deep in the carpet. It enables an almost AWD feel to its on-track behaviour too, with power able to be fed in ahead of the apex rather than waiting until the wheels start to straighten. Pin the power, let the diff sort things out – the electronics are remarkably effective.

In fact, virtually every feature is designed to help you drive fast. There are shift lights on the dash that progressively illuminate before flashing just shy of redline, giving you perfect shift timing. The gearshifts themselves are hard to bodge given the well-defined gate and slick carbon synchros, while downshift rev-matching helps you concentrate on nailing brake points rather than heel-toeing. Meanwhile, the big-bolstered seats might not say ‘Recaro’, but they do an excellent job of locking your torso in place when you’re cranking up the lateral G. Longitudinal G is also something you’ll be winding up as well, given the strength of the i30 N’s brakes. There’s no Brembo hardware, unlike many hot hatch rivals, but the N’s stoppers (sliding calipers adapted from Hyundai’s Santa Fe) deliver huge stopping power with a pleasingly firm and responsive pedal.

Then there’s that engine. A relative of the Sonata’s turbo donk, the 2.0-litre’s smidge of low-rpm lag that’s felt out on the street ceases to be an issue out on a track – with the tacho needle kept above 3000rpm, engine response is vicious, it’s 202kW and 378Nm in full effect. Not quite as rabid as a Civic Type R, but not far off – which isn’t bad considering the Honda packs more power, more torque and weighs a little less.

The exhaust adds some extra drama too. Slotted into Sport+, big lifts of the throttle at high rpm elicit heavy-caliber sound effects from the twin tailpipes – sonic whipcracks that have you wondering whether the exhaust gaskets are a regular service item on the i30 N. What’s it all add up to? A lap of Winton in a very respectable 1:42.0. Impressive, given yours truly doesn’t possess race driver talent, and the stock Pirelli P-Zeros are road rubber, not sticky track hoops. There’s easily more time that can be chopped from that.

To demonstrate what’s possible, Hyundai also wheeled out a lightly modded example for the press to thrash. With Pirelli Trofeo R semi-slicks, lightweight O.Z Racing wheels (both of which help shed 7kg of unsprung weight per corner), brake cooling ducts and Pagid pads, that car easily achieved a 1:40.4 around Winton’s long configuration. Not only that, but the stiffer sidewalls of the Trofeos gave a sharper turn-in that helped unstick the rear wheels more easily, unlocking a more chuckable character. With Hyundai’s track-day-friendly warranty also covering cars on aftermarket rubber, it’s a modification that’s well worth doing.

Yet what’s just as impressive as its actual on-track performance, is the i30 N’s durability. Many road cars start to come apart at the seams when subjected to repeated laps at race speed, but the i30 N was barely breaking a sweat. Oil and coolant temps were stable, tyres weren’t chunking, brake fluid never boiled. Remarkable, given every car present was driven hard and with varying degrees of competence and mechanical sympathy. I peeked into a caliper at the end of the day, and there was still more than a centimetre of brake pad thickness. It seems unlikely that owners will be making many warranty claims from pit lane.

But even though Hyundai’s track-day warranty coverage may prove unnecessary, it does at least give owners the confidence to work their cars properly hard. Indeed, a race track is the only venue where the full spectrum of the i30 N’s talent becomes accessible, and it’s remarkably impressive to experience it. Every self-respecting i30 N owner should partake of a track day at least once – they’re robbing themselves if they don’t.