KOREA’S automotive industry has come of age, and no other car illustrates this so poignantly as the properly world-class i30 N.

This is the first proper attempt by Hyundai at a bona-fide hot hatch, and the first model to go on sale wearing the brand’s newly-minted ‘N’ performance badge.

Hyundai claims the i30 N is the real deal – a hot hatch that doesn’t just keep up with the Joneses, but blasts ahead of them. We need to validate that, naturally. At $39,990, it’s also one of the most affordable hot hatches on the market, but its spec sheet is full of numbers that compete with cars that are priced 10 grand above. Is the i30 N really the performance bargain that it makes out to be? PLUS: Superb traction for a front-driver; entertaining exhaust; adaptability; power and torque; sharp handling
MINUS: Some torque steer remains; no automatic for now; sedate styling SPOILER alert: The i30 N is bloody good. Shockingly good, when you consider that this is Hyundai’s first proper tilt at making a bona-fide hot hatch.

Beginner’s luck? Hardly. More so, the i30 N is the result of a holistic approach to crafting a performance car, rather than just turning up the wick on an existing grocery-getter’s mechanicals. Sure, it’s i30 sheetmetal that you’re looking at, but there’s so much that’s been changed underneath the skin that the i30 N may as well belong to a different genus altogether.

How different is the N’s DNA from a garden-variety i30 SR? Let’s start with that engine. Displacing 2.0 litres, direct-injected and huffing boost from a twin-scroll turbocharger, the i30 N’s engine is the highest-output member of Hyundai’s venerable Theta family of inline-four engines. 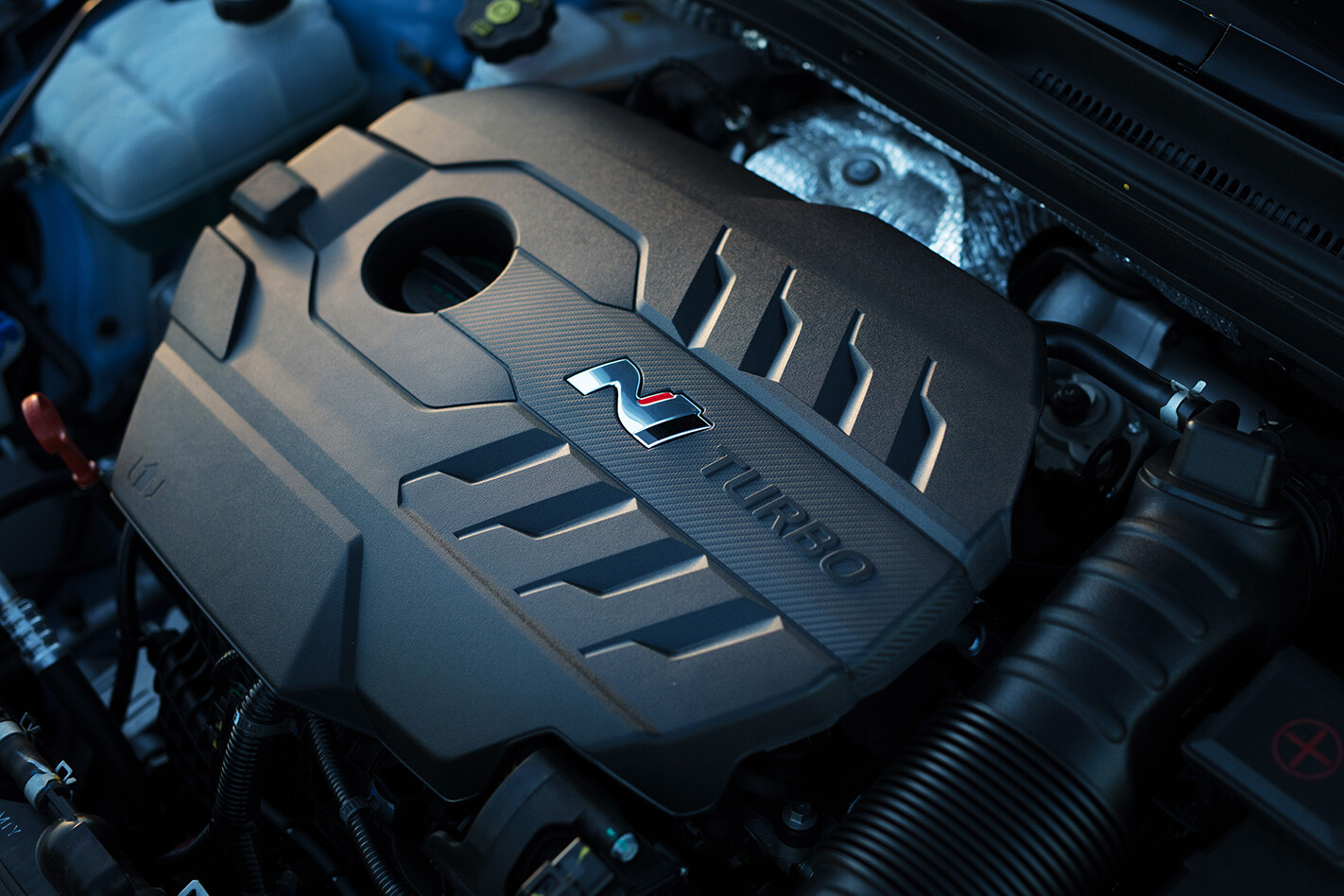 The numbers are impressive: 202kW of peak power occurring at 6000rpm, and a fat torque plateau of 353Nm between 1450-4700rpm. Mash the accelerator to the firewall, however, and an overboost function pushes the torque max to a sizable 378Nm between 1750-4200rpm. Stout.

It’s matched with a proper mechanical limited-slip differential too, with its locking function electronically controlled. Vital when you’re channelling such hefty outputs to the front wheels exclusively, and infinitely preferable to brake-based ‘virtual LSD’ solutions used in rivals like the Golf GTI. The front suspension is still a conventional Mac strut design, but uses N-specific geometry to banish fun-sucking nasties like big scrub radiuses (which contribute to torque steer) while also bringing the roll centre closer to the car’s centre of gravity. Don’t know what those last two are? Don’t worry – it just means there’s less body roll for the suspension to contain.

The points of difference continue, with extra structural reinforcements, rack-mounted electric power steering, bigger brake hardware and an ultra-tight gearshift gate, but here’s the net effect of all that – the i30 N isn’t just easy to drive fast, it’s a joy to do so.

It’s a sedate and docile experience if you keep everything in please-don’t-pull-me-over mode, but where’s the fun in that? Thumb the chequered flag button that hangs under the steering wheel’s right spoke and the i30 N’s most manic settings are loaded up. The throttle map is tighter, overboost is unlocked, the exhaust becomes more raucous, the suspension stiffens and steering effort increases.

The gear shift action has slickness that’s second only to the Civic Type R, and is augmented by rev-matching tech that eliminates the need to heel-toe when braking hard. With the exhaust valves opened all the way the four-pot’s crackle-happy soundtrack offers up aural comparisons to Hyundai’s WRC cars too, thus cranking up the racecar vibes. 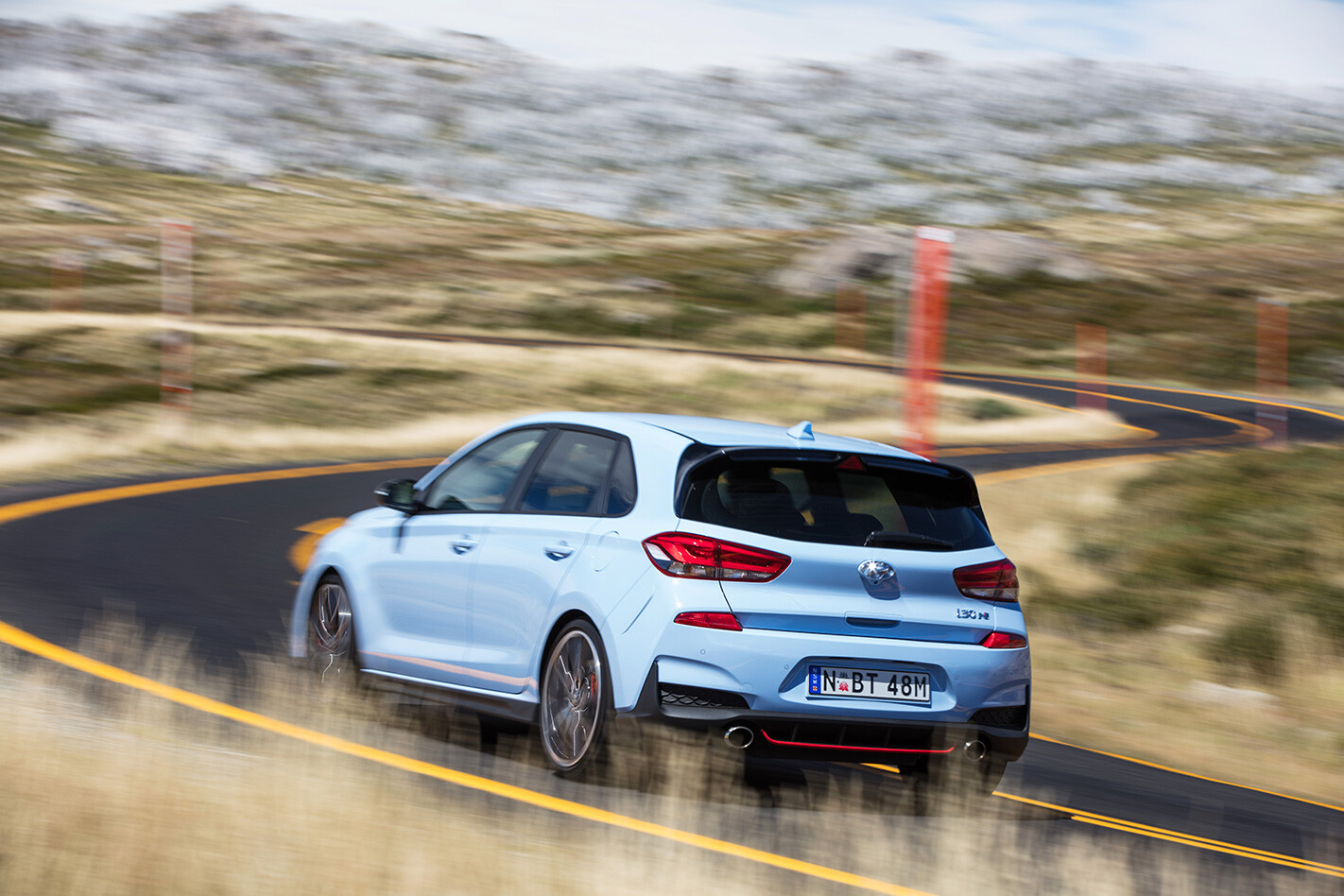 And straight line performance is exceptional. Responsive with just a little low-rpm lag, the turbo 2.0 hauls hard and sounds fantastic on its way up to its 6700rpm rev cut. Gearchanges in Sport and Sport+ modes are punctuated by thunderclaps as residual fuel ignites in the exhaust tract, and the thrust is seemingly relentless despite a reasonably porky 1429kg kerb weight.

It’s a demon on mountain roads too. Grip is simply massive on the Hyundai-specific Pirelli P-Zero rubber, and the i30 N’s handling is tuned to deliver high-speed stability rather than lift-off oversteer antics. Given its ability to rapidly stack on speed, that’s a good thing. But the above isn’t a coded way of saying the N is a little bit dull and inert compared to tail-happy rivals like the Focus ST or Megane RS. Rather, its limit of adhesion is so high that it’s difficult to unsettle. The threshold for understeer, for example, is hard to breach unless you seriously misjudge your braking points, while the brakes can be leaned on heavily without any evidence of fade.

The real eye-widening stuff comes after you’ve turned in. That smart differential up front works wonders, allowing power-out techniques more akin to an AWD car than a front-driver. Get on the power earlier than you ordinarily would and let the differential sort out the traction – which it does so with admirably little fuss – and the i30 N slingshots itself out. Tight radiuses show up some torque steer, but it’s miniscule considering just how much twist is being sent to the street. The i30 N’s suspension tune is unique to Australia. Hyundai’s local operation was given special dispensation to take some of the tautness out of the i30 N’s damper settings, and the result is a car that’s appreciably compliant when in Sport mode (though obviously firm and crashy over bigger bumps), and surprisingly civilised in Normal mode. There’s little of the teeth-chattering stiffness that was present when we first fanged the i30 N in Europe. 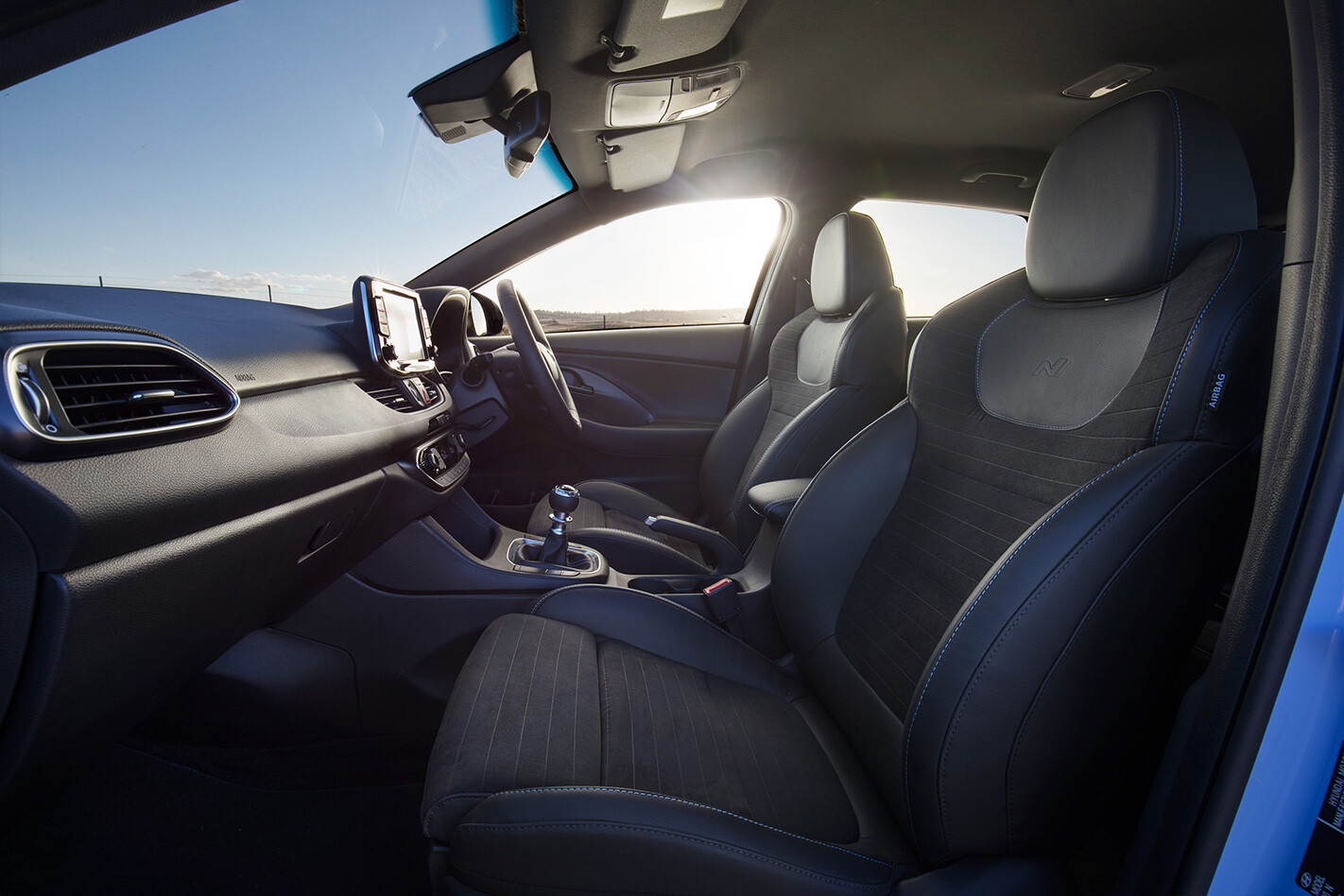 Yet it’s still liveable. The i30 N does the Jekyll/Hyde thing rather well. Beyond the special instrumentation, chunky gearknob, thick-rimmed steering wheel (verging on too thick) and body-gripping front sports seats, the i30 N’s cabin is understated and purposeful – not needlessly flashy. Drop the rear seatbacks, however, and the i30 N’s big exposed bar work that links its rear suspension towers gives you a reminder of its serious side. Need to bring home some flatpack furniture? Undo four bolts and that brace comes out to restore some versatility.

Objectively and subjectively the i30 N is a winner. Financially too, given its ultra-keen $39,990 retail sticker that makes it just $1000 more than the Ford Focus ST, while offering a level of performance that competes with a $50,990 Honda Civic Type R. 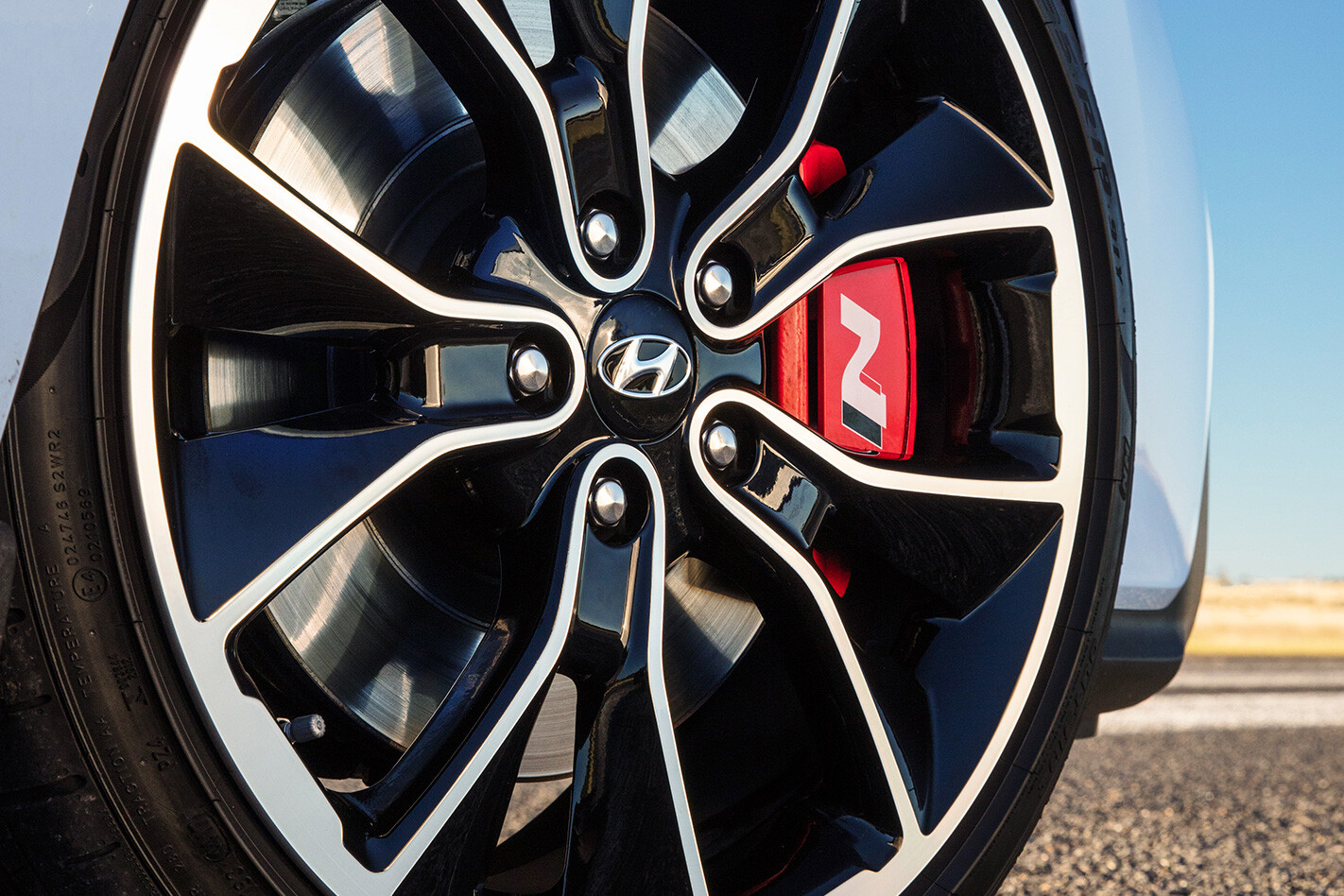 A Golf GTI weighs less but costs more and can’t touch the Hyundai’s power, while the Focus ST is comparable on most metrics but struggles to lay its power down. Everything else that’s in the same performance ballpark, like the 308 GTi, Civic Type R and Mini John Cooper Works, are priced well above the i30 N. To call it a performance bargain is a heinous understatement.

Oh, and did we mention that the i30 N carries the same five-year, unlimited-kilometre warranty as every other Hyundai – and that the company will still honour it even if you take it to the occasional track day? For a performance car, that’s an incredible declaration of confidence. The i30 N’s only failing is the absence of an automatic transmission. An eight-speed dual-clutch auto is on the cards, but right now the N remains a six-speed manual proposition. Enthusiasts likely won’t be dissuaded by that, but in auto-mad Australia it’s something that’ll likely stand in the way of Golf GTI-levels of sales.

And to be fair to the i30 N, that’s really the only thing we can mark it down for. It’s not just a great first effort for a company that’s never done a hot hatch – it’s a segment leader in almost every respect.