SUBARU Australia has announced pricing for its WRX and WRX STI performance pair, with significant additions to the feature set delivering gains in safety, performance and comfort, while the starting price remains unchanged at $39,240 for the base WRX manual.

And it’s not just spec changes, either. Cosmetic tweaks to exterior plastics and rolling stock give the WRX and WRX STI a distinct look from the pre-update model. Headlamp housings are the same (only their innards have been reworked), but the lower grille opening is bigger and ringed in black trim, and is also flanked by reshaped cheek vents. 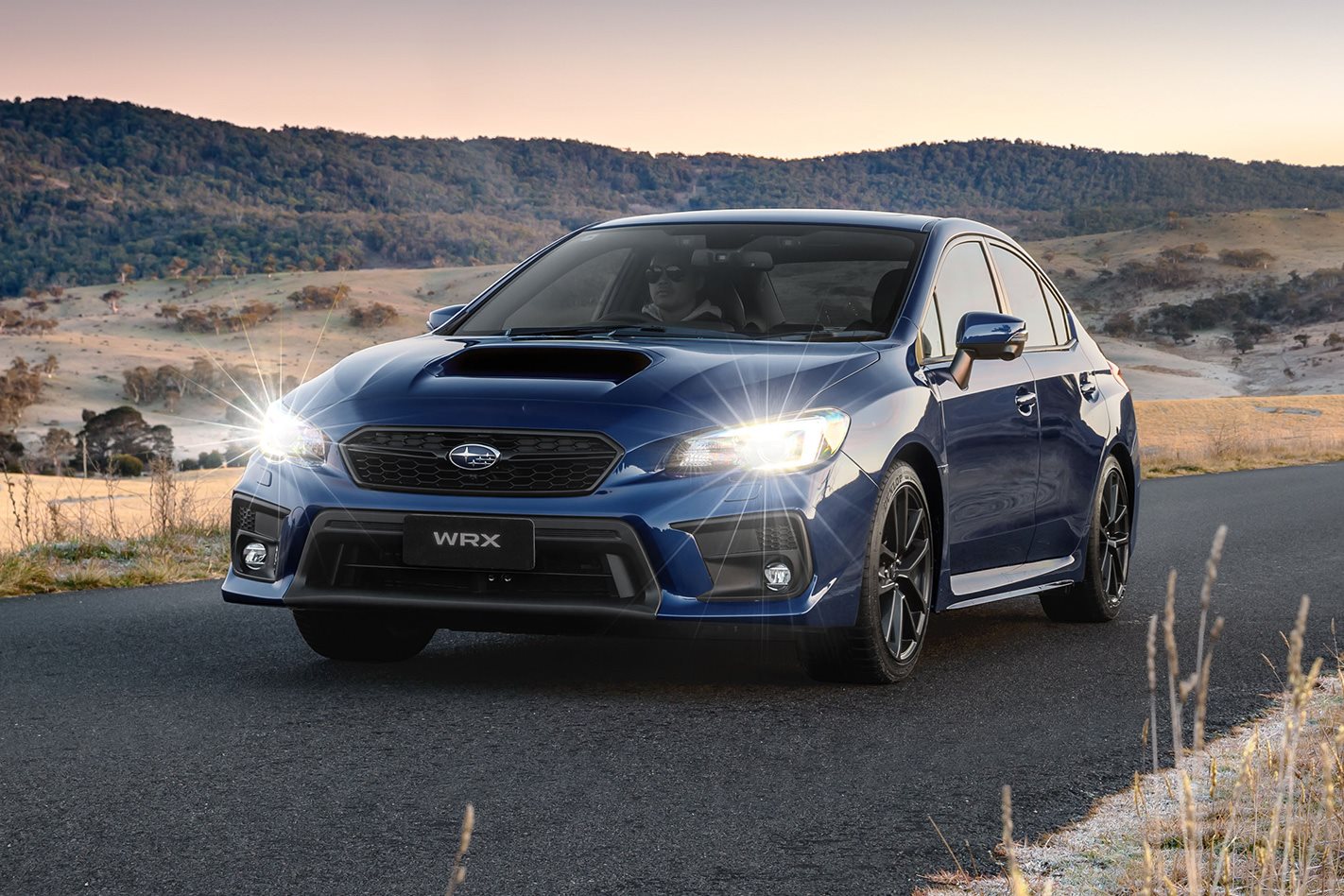 The upper grille is also restyled for 2018, and the front indicators have migrated to sit within the headlamps, thus cleaning up the side vents and freeing more space for the new LED foglamp bezels.

The meat of the WRX and WRX STI’s mid-life update is mechanical, however, with all models across both ranges gaining significant under-the-skin enhancements to lift their performance.

Braking hardware is the biggest beneficiary, with even the base WRX receiving upgraded Jurid front brake pads that offer better fade resistance and improved pedal feel, with Subaru claiming a 20 percent improvement in brake efficiency just from changing pad compound. 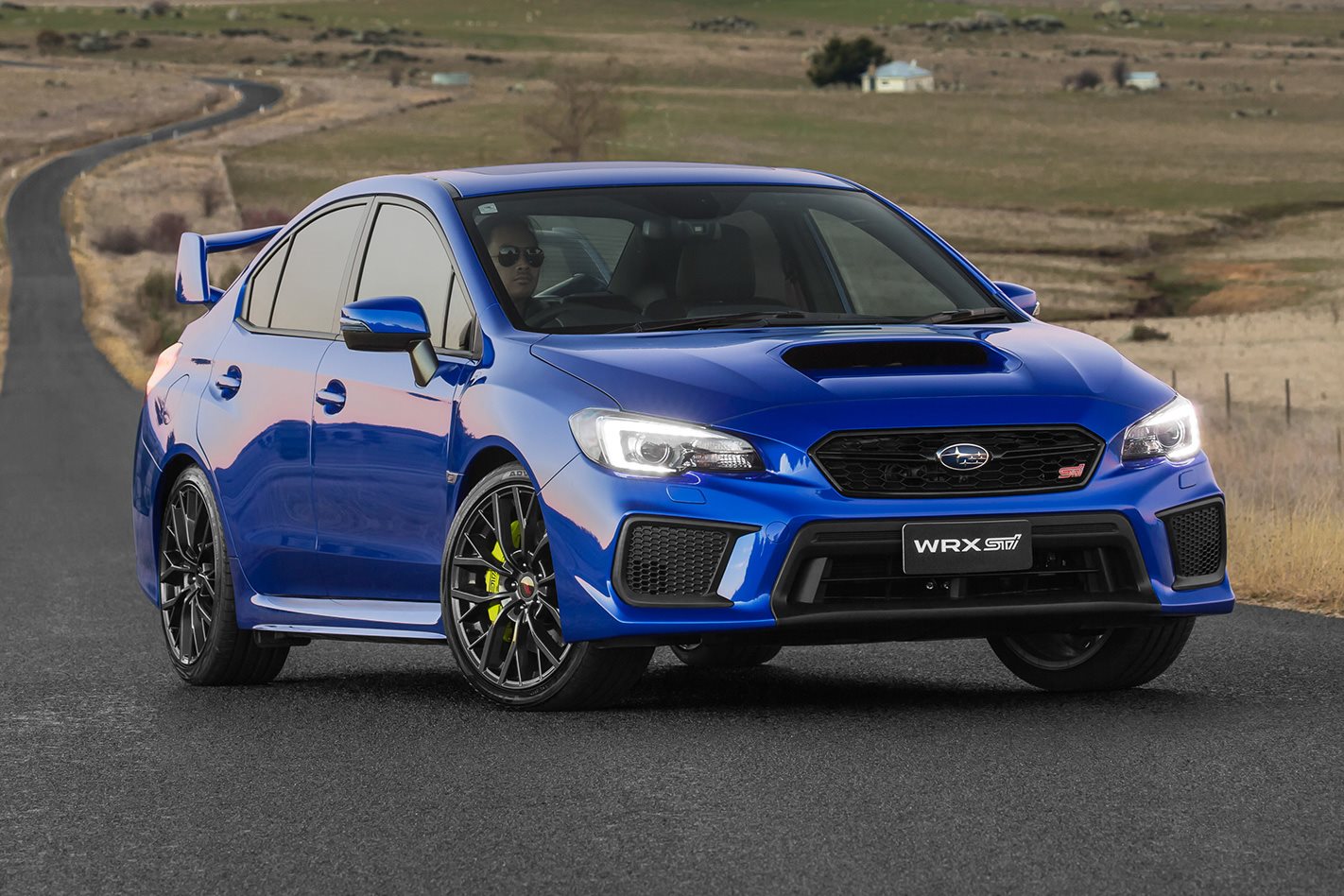 The STI range goes a step further, with massive six-piston front calipers and two-piston rear calipers biting down on 340mm and 326mm cross-drilled rotors. Supplied by Brembo, those calipers are also painted fluorescent yellow for a little bit of Ken Block-style visual drama.

For numbers nerds, the MY18 model’s brake pads now cover a surface area that’s 20 percent bigger at front and 50 percent larger down the rear, with the brake rotor’s friction surface also thicker. Result – they’ll cop a lot more heat before fade becomes an issue, which is one less thing for track junkies to worry about.

Suspension hasn’t been forgotten either, with both WRX and WRX STI receiving significantly rejigged suspension calibrations to improve both ride comfort and stability. Damper settings front and rear are new, as are spring rates at all four corners, while the rear stabiliser bar diameter is also changed. Subaru won’t quantify just how much the suspension has been altered, however expect slightly more compliance and agility in the MY18 model.

There are no mechanical changes under the bonnet. The WRX continues to be powered by a 197kW/350Nm turbocharged 2.0-litre flat four with a six-speed manual or CVT auto transmission, while the WRX STI makes use of a 221kW/407Nm 2.5-litre turbo flat four and is exclusively a six-speed manual proposition. 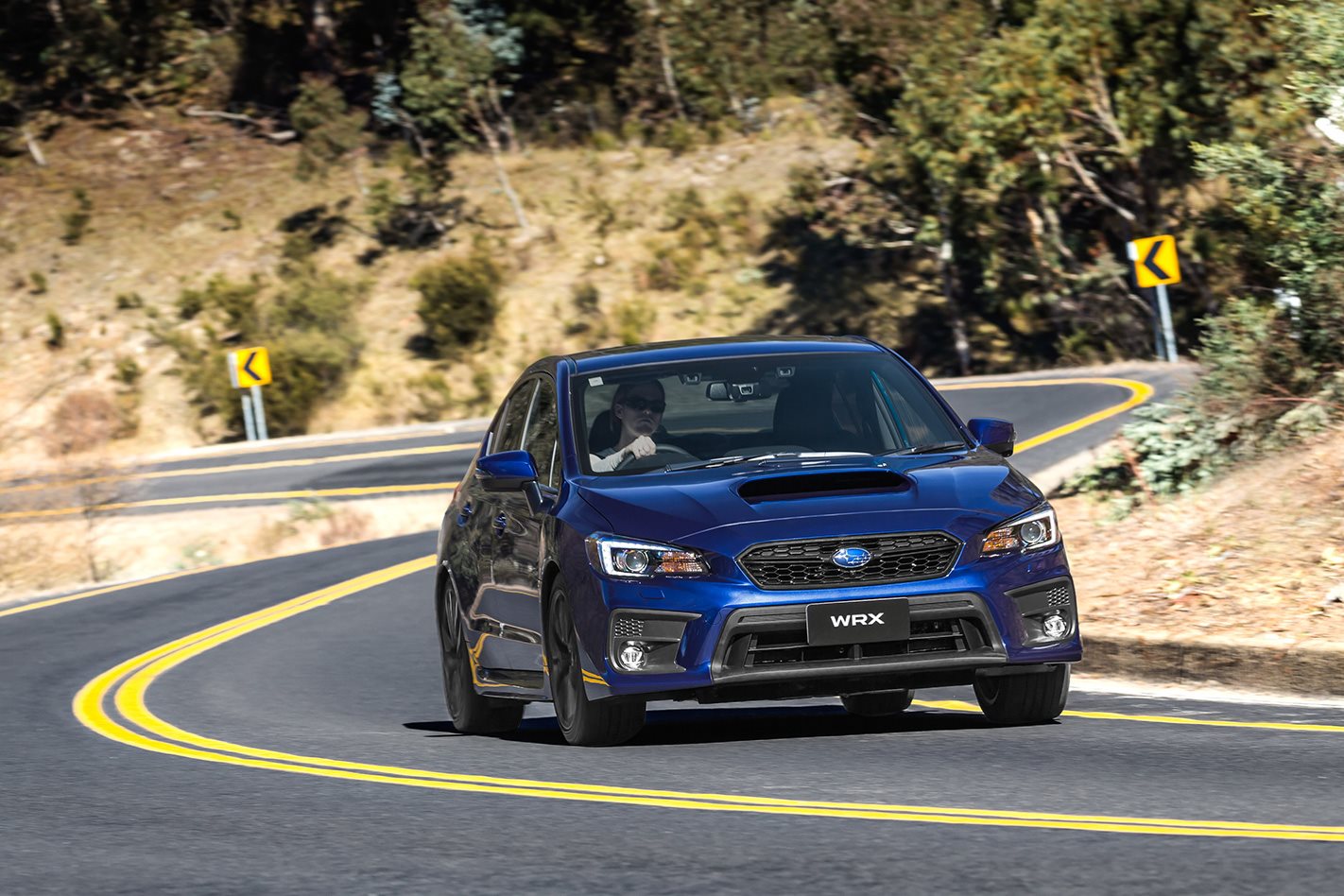 The auto-equipped WRX variants, however, gain a hill-hold function and an electronic parking brake for 2018.

On the WRX Premium and WRX STI Premium, that screen can also display a video feed from a front-mounted camera (as well as the existing reversing camera) which is new for 2018. If you opt for an automatic-equipped WRX, the safety equation is strengthened with the addition of Subaru’s EyeSight safety tech, which bundles active cruise control with autonomous emergency braking and pedestrian detection. 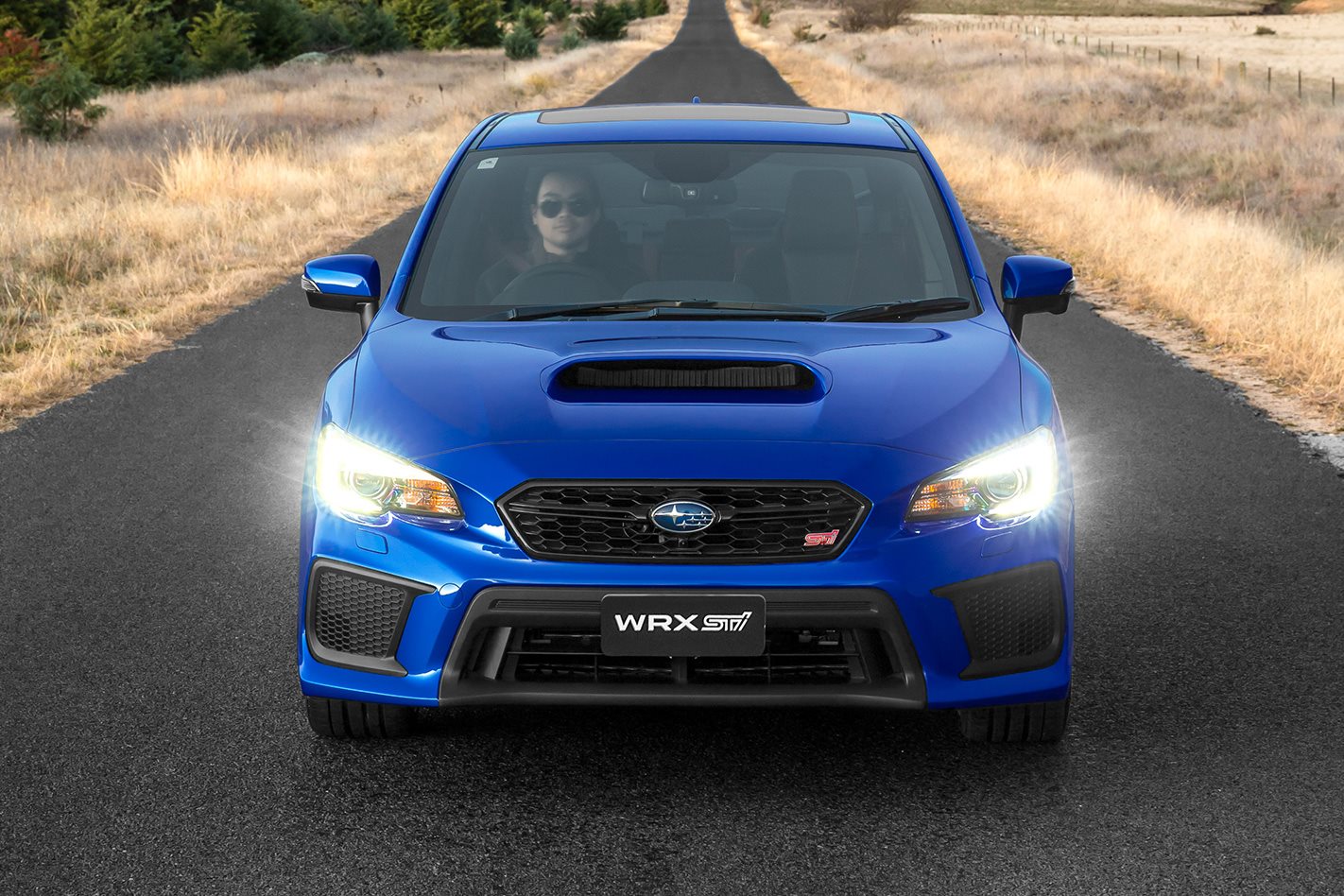 Dusk-sensing headlamps and rain-sensing wipers, both of which were previously exclusive to the Premium model, now become standard on the base WRX.

In-cabin updates include changes to the door cards, with a grippier coating and revised contouring on the door pulls to make them easier to grasp. Red seatbelts on STI models and black plastic trim (high gloss in STI, bare plastic in WRX) on the centre stack, gearshift surround and steering wheel centre round out the rest of the cabin updates. 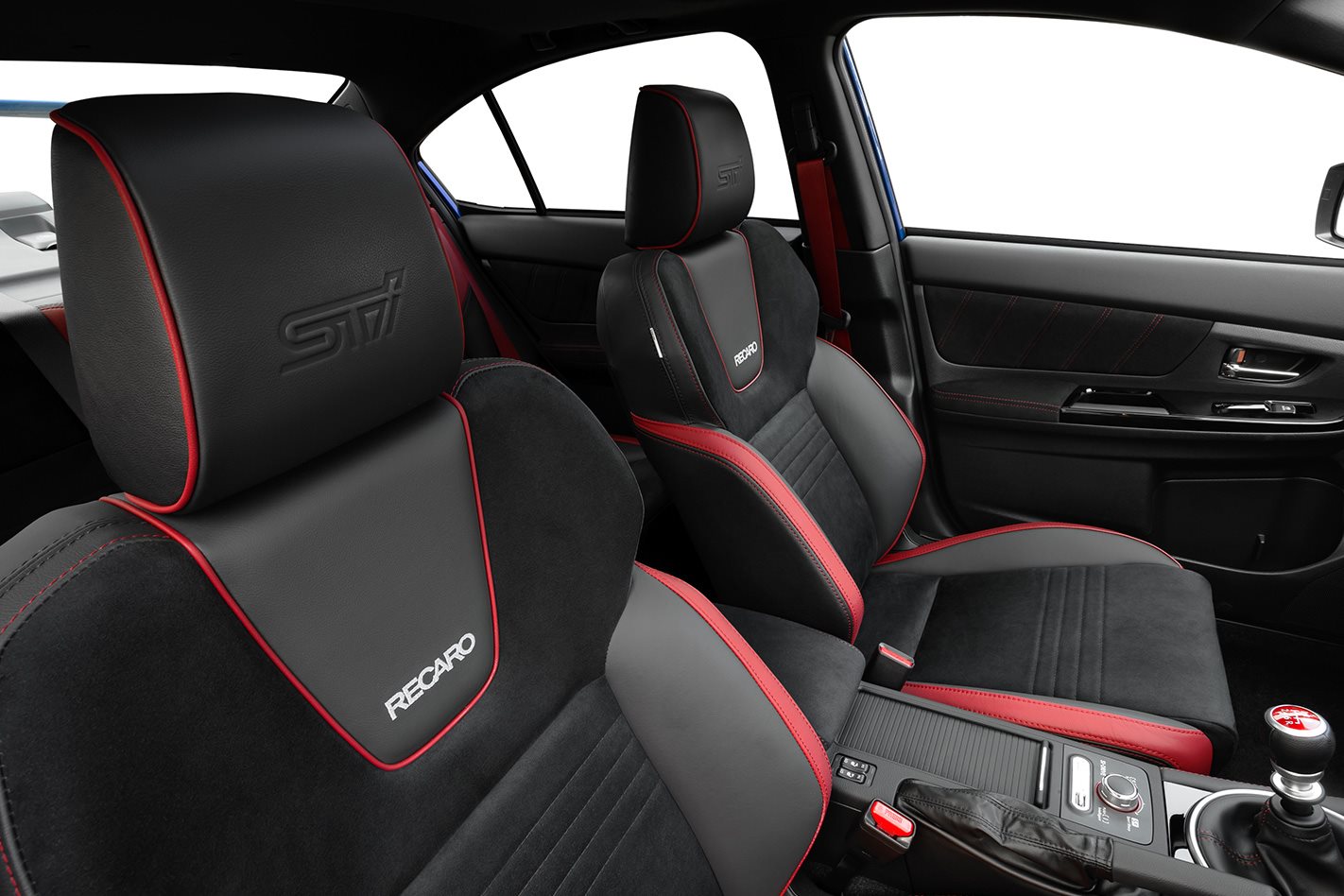 A new STI Spec.R flagship model also sees the return of Recaro-sourced front seats to the range-topping STI, albeit at a $1700 premium over the otherwise identically equipped WRX STI Premium.

The base WRX manual and the WRX STI Premium make the transition to MY18 specificaiton with its old pricetag intact.

All other variants get a slight price bump to reflect their extra equipment, with the Eyesight-equipped WRX automatics now costing $3000 more in base WRX form instead of just $2000 for the MY17 model.  In the higher-specced WRX Premium grade, the automatic attracts a $3200 impost. 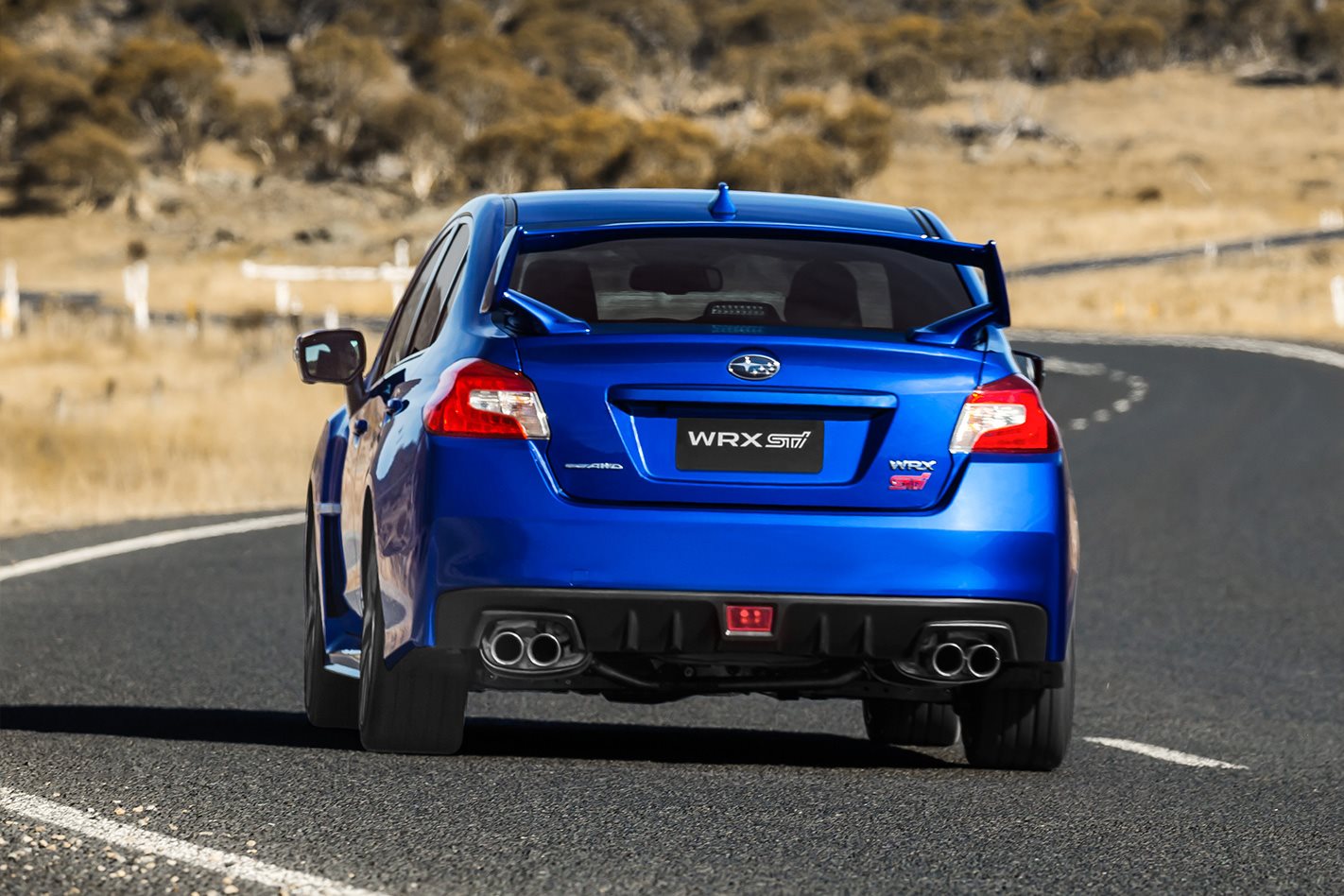 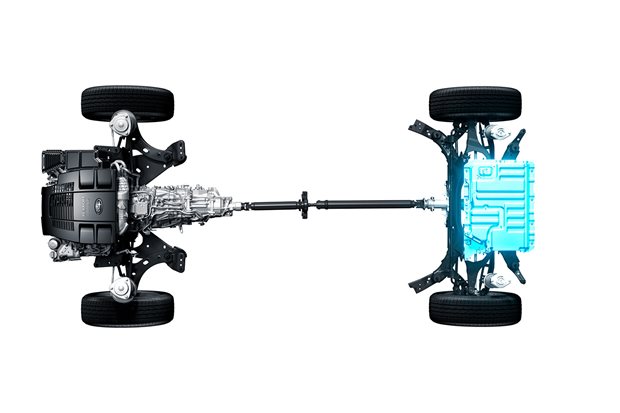