JUST because you’re one of the most respected and long-serving senior engineers in the global automotive business, and just because you’ve been peeling off hot laps of the famed Nurburgring for over 40 years, does not make you immune from that exchange we’ve surely all had at one point or another with our life partners.

First published in the July 2017 edition of Wheels Magazine, Australia’s most experienced and most trusted car magazine since 1953.

Albert Biermann, 61, who has been serving as Hyundai’s executive vice president for vehicle testing and high-performance development since April 2015, laughs and his eyes sparkle when he recalls how his wife sometimes critiques his driving:

“She likes to relax and do her knitting in the passenger seat, so yes, many times, on an autobahn, perhaps in an M5 or M6, maybe at 280km/h and being jolted in a sweeper, she would look at me; ‘Albert, please; is it really necessary to drive this fast?’” “I would always answer, ‘Yes!’”

Biermann probably has greater justification than most for driving the wheels off any car he jumps in. He was a BMW career man since he joined the company in 1983, and helped shape the M Division’s back catalogue into the icon-studded line-up we now (mostly) revere. And let’s not overlook the legendary E30-generation M3 racecar, which is the most winning tin-top of all time. Biermann is rightly credited as the ‘father’ of that car, and it’s clearly still very close to his heart. The mere mention of it has him beaming and talking eagerly, expansively, about its gestation and subsequent world domination.

He holds only one regret when it comes to that little four-pot giant-killer: “I didn’t stash one away for myself in my garage…”

To understand Biermann’s almost preordained rise at BMW, we need to go back to his upbringing in Germany, where he was the youngest of three sons to a BMW-driving, motorsport-passionate father. Some of his early automotive memories are of joining his dad and two brothers on regular pilgrimages to race at the Nurburgring.

“The drive with my father to the Nurburgring was like his shakedown testing,” Biermann laughs. “From Cologne to Nurburg there was no autobahn, it was a B-road; twisty, lots of corners. He could really tear that road apart...”

Biermann’s father died suddenly from a stroke in 1972 when Albert was just 15, but his passion had been passed on. He learned to drive in a VW Beetle, but passed his test in a BMW 2002 at age 18. Later he raced and rallied a French-made Simca: “the best power-to-dollar car I could get my hands on.” He also competed with considerable success in autocross almost every weekend.

His career trajectory at BMW would see him filling a more diverse range of roles than anyone before him, or since.

He spent a three-year stint with BMW North America, including a senior engineering development role, where he gained a greater understanding of perceived American tastes. Management, he says, insisted Americans wanted soft-riding cars, so he built a lightly sprung, pillowy-damped E36 mule for them.

“It was a horrible car,” he laughs. “Once they sampled that, management pretty much said, ‘Okay, don’t do that. Do it your way.’” Enough Americans quickly came around to Biermann’s way of thinking. He was also project manager of the second-generation X5; a role he says he loved due to the challenge it brought in “pulling together every element of the car-creation process.”

He took over M Division in 2008 right around the time of the shift to turbocharging. Did he have concerns about the loss of high-revving atmo engines? “Of course, but there was a clear position at board level. There was no room for discussion,” he says flatly.

But he was clearly falling out of love with the hallowed M.

“I was not so excited there anymore. We had some management changes; the perception at board level of M Division had changed. I was thinking, ‘maybe this is not all that M should be.’”

So, I ask, how did the transition to Hyundai occur? I imagine some high-powered head hunter on the job, with lots of secret meetings and covert emails from an offshore server or something.

Not so, says Biermann. “No, someone just called me on a Friday evening and offered me a job. I told them I have no interest. Yet they called again a few weeks later.”

He claims to have had “no real clue about Hyundai/Kia.” But his curiosity had been piqued. “I then looked into it. I started by learning about Korean history; the country.

Then I visited Korea, met with senior Hyundai management, heard the plans for motorsport, the high-performance division, Genesis luxury brand, and so on…

“I received so much respect, and I could tell there was a pragmatic approach; a very different culture. I thought, ‘okay, this is something I would love to do.’” 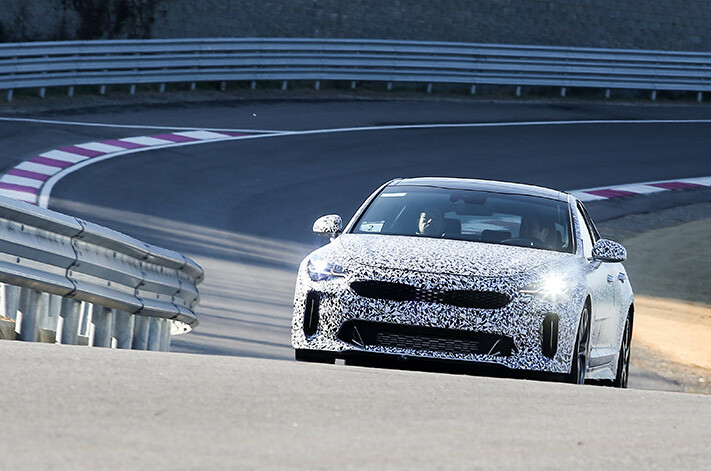 "All N cars will be tuned at the 'Ring. This is where you make a high-performance car" - Albert Biermann

He’s based 20km outside of Seoul, and has a driver who takes him to Namyang each morning so he can work from the car, or, “if it’s been a very big company dinner the night before, maybe get some extra sleep.”

He loves the boozy company dinners that are part of the Korean culture. “The Koreans have a side, like little kids, after plenty of soju. They open their hearts; open their minds. It’s wonderful; they get so excited.”

Biermann oversees three divisions staffed by over 1000 people, and two vast test centres: one for dynamics-related work, the other for systems testing, like NVH, HVAC, durability, aero, etc.

With such a broad spread of responsibilities, I’m curious as to how he divides his time: “Do your allocate time to specific projects, and concentrate largely on each one individually?” I ask.

He shakes his head ruefully: “No, it’s more like where the fire is burning the most … that’s where I run to. The Korean engineers are very ambitious; eager to please. If I say, ‘I wish we had this [certain component or system] they come back to me in a few days and want to show me a solution. So I’m always under the gun.”

The N Division had been in gestation for around two years before Biermann arrived in April 2015 and the WRC program was up and running. Someone needed to join the dots.

“There were a lot of ideas; a lot of benchmarking had been done, especially for i30N. Project management was partly in place. There were many skilled engineers; they just needed the guidance.”

But Biermann is adamant the car-buying public will feel his presence not just in the high-performance variants from N division, but eventually in every Hyundai and Kia that rolls off the line.

“The high-performance side is really more my hobby,” he grins.

As for a hi-po Genesis N variant, he shuts that rumour down. “The Genesis brand is not heading in that direction. Those guys are focusing on luxury and refinement, not so much on outright performance.”

But that said, the G70 Sport variant will have 275kW, he says, with a shorter wheelbase than platform-mate Stinger, and less weight. “It’s not like an N car; not track focused. But still a very nice drift machine with the ESC off. You’ll like it,” he assures me.

I come back to the retirement question, given that at BMW it’s a mandatory 62. What is it at Hyundai? He raises his eyebrows and beams, genuinely, “I don’t know!”

Clearly there’s a seemingly unending set of challenges rolling out in front of him, and he appears delighted to be able to channel his vast engineering smarts into tackling them. He’s determined to not just produce Hyundais and Kias that are better to drive, but shift our entire perception of the two brands.

Then there’s his obvious and deep appreciation of Korea itself. “There’s beauty everywhere there,” he says. “It’s not always obvious, but if you look you’ll find it. My move to Korea has provided a real enrichment of life.”

It would seem corporate Hyundai and Kia feel exactly the same way.