There’s going to be something very different about the upcoming G30-based BMW M5. Wheels sends Carey along to discover what it is

WHAT IS IT?A high-performance version of the new G30 5 Series. Its engine is an update of the twin-turbo 4.4-litre V8 in the previous F10 5 Series-based M5, but a complete rethink of the super-sedan’s drivetrain makes it a much more capable and charismatic car. 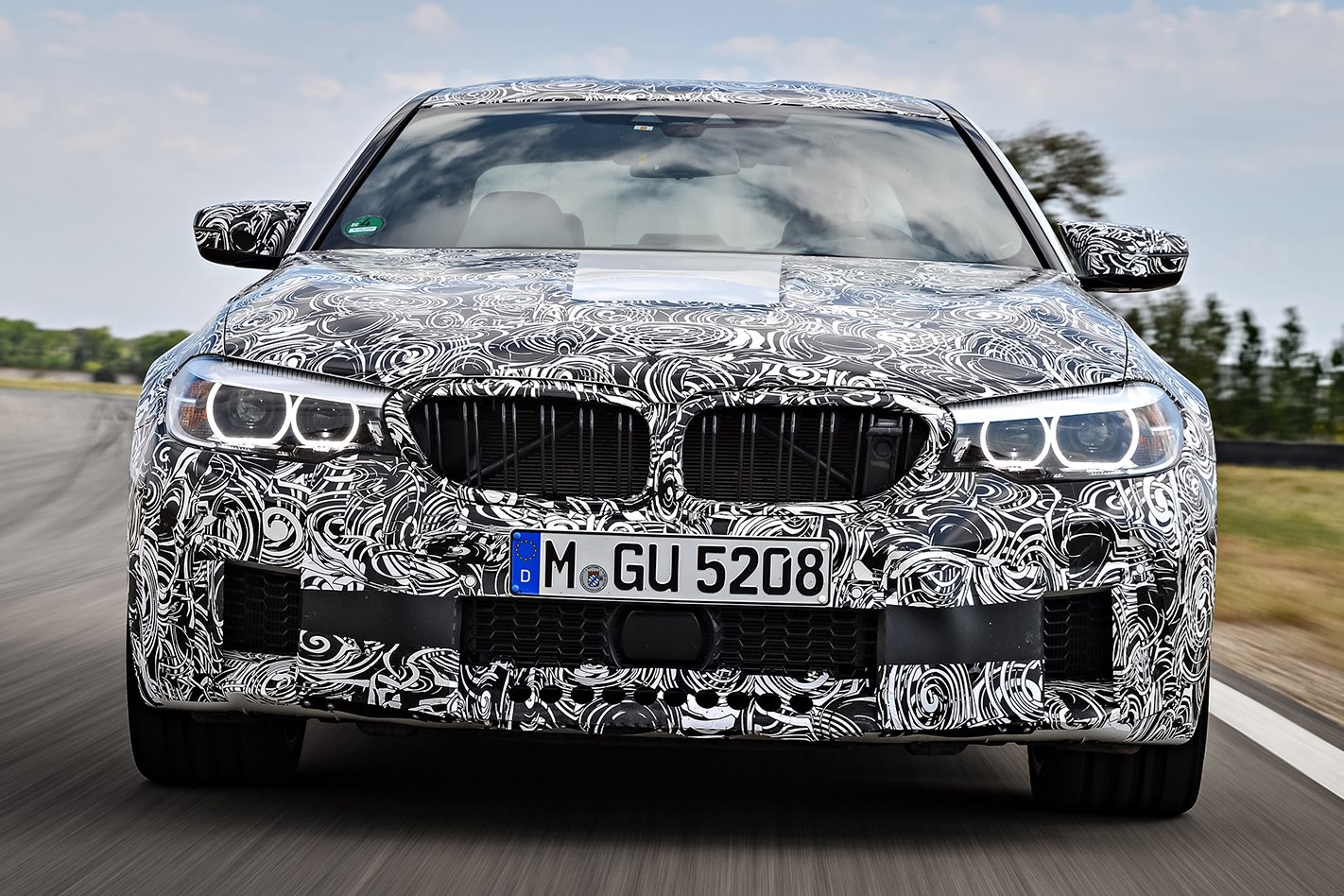 MAIN RIVALSThe Audi RS7 Sportback Performance has a great engine and lovely looks, but its nose-heavy handling is best suited to arrowing down the autobahn, not slicing round a circuit. That’s the problem when you have an architecture that’s been designed around front-drive, with all-wheel-drive added. The Mercedes-AMG E63 S, meanwhile, is the car M Division is obviously aiming to beat. M is promising similar power and performance, and our prototype drive makes us suspect the new M5 could have the better all-round balance and handling.  THE WHEELS VERDICTHaving lost its way with the quick but uncharismatic F10 M5, BMW’s M Division is back on form with the forthcoming G30 version.

PLUS: Performance; handling; steering; brakes; set-up options for driverMINUS: 2WD mode only for the skilled; engine should sound better 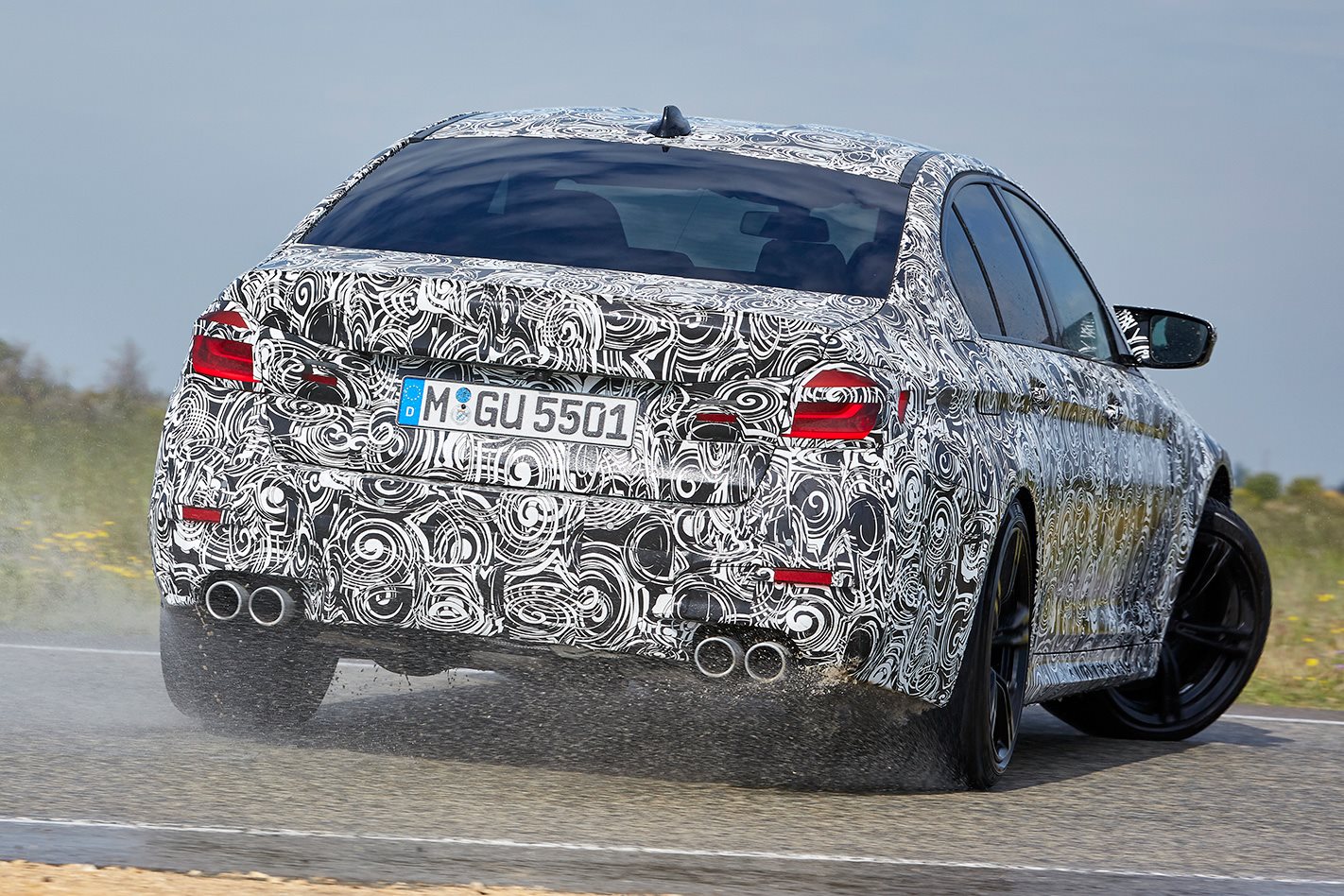 THE WHEELS REVIEWSWIRLY patterned prototype camouflage covers the top of the BMW, but not its underside. Raised a couple of metres above the floor of this workshop well inside the security perimeter of the German company’s south of France proving ground, everything that makes the new M5 a very different car from its predecessor is plain to see…Dirk Häcker ignores the all-wheel-drive hardware; the transfer case, front differential and driveshaft connecting the two. BMW M Division’s engineering chief instead points to the compact block of hydraulics and electronics bolted to the car’s underside just behind the left front wheel. “The most important thing with the M xDrive,” he says, referring to M Division’s version of BMW’s xDrive all-wheel-drive tech, “is not the components and the actuators, it’s more the software. The software is in here”.“It’s the same DSC unit like in the 7 Series or in the 5 Series,” he says. “It’s a hydraulic part and an electronic part, and the brain, the M xDrive brain, is integrated in this control unit. It’s specific BMW M and it’s not available for other customers of this supplier.”The reason for the focus on software becomes obvious as Häcker moves to discussing the hardware. There’s nothing here that BMW or M Division isn’t already using in other models.The transfer case is like the one used in 7 Series with BMW’s xDrive all-wheel-drive system, Häcker says. “It’s very similar, but it’s adapted for the M5; some geometric aspects, but also for the higher torque.”Between the car’s rear wheels is something even more familiar. “This active M Differential is well-known from the predecessor, from the F10 M5. But also from the M3 and M4,” the engineer says. “It’s nearly the same system. It’s an electric motor, a clutch system, and you can modulate the transfer between left and right between zero and 100 percent. That means complete open or complete locked.”Häcker heads forward. “The front differential, this is an open one. Open is very important for the right steering feedback.” The differential is basically the same as used in V8 versions of X5 and X6, he says.Like the G30 5 Series it’s based on, the new M5 has electric power steering. It’s a variable-ratio rack, Häcker explains, and much more direct than in the F10 M5.The transmission is a ZF eight-speed Steptronic auto, modified for use in the M5. It’s able to match the seven-speed dual-clutch of the F10 M5 for shift speed, but brings greater smoothness and comfort in everyday driving, Häcker says. 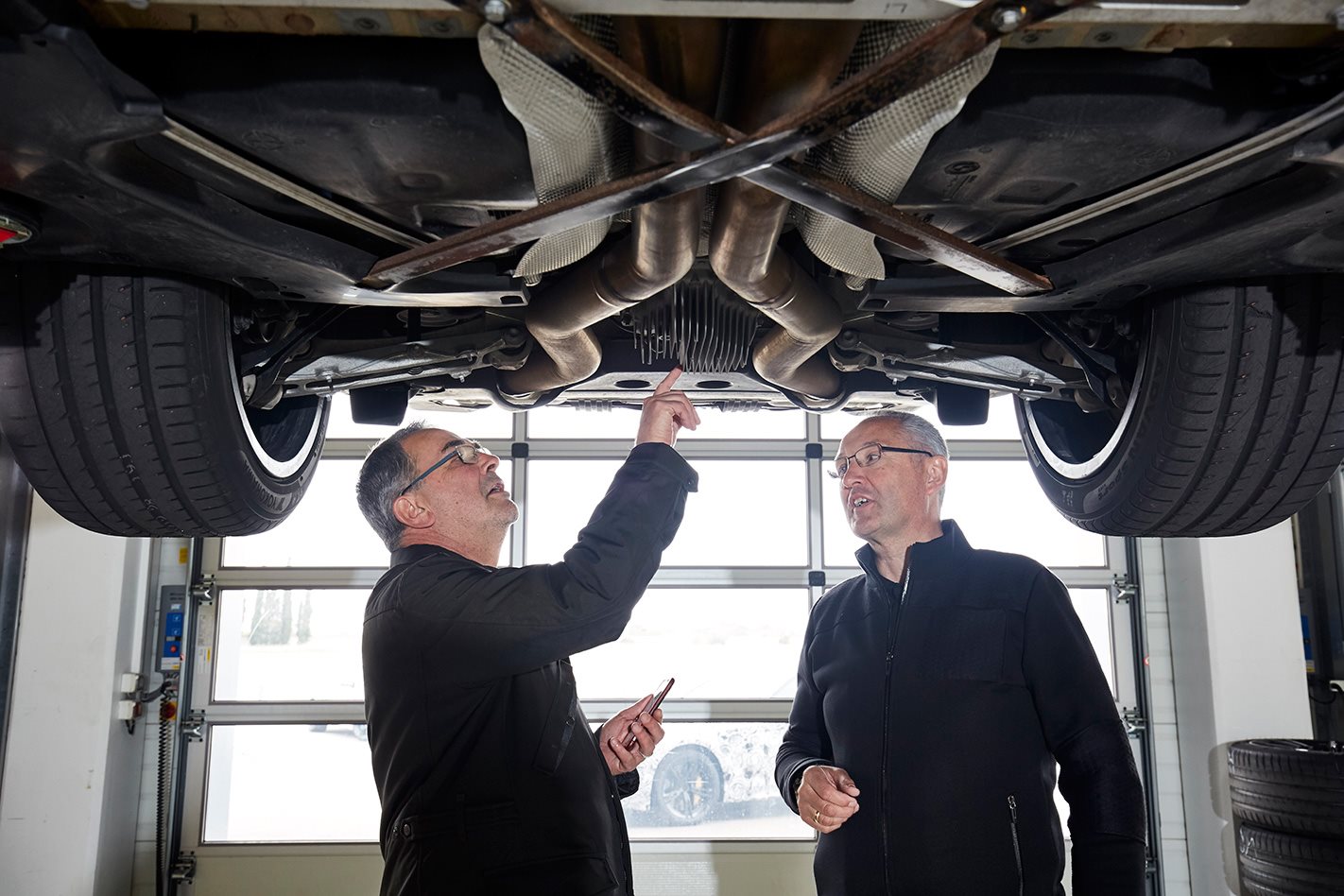 One of the changes is a deeply finned cast aluminium oil pan, instead of the plain plastic component used in less demanding applications. It keeps the transmission oil 10 degrees cooler. According to Häcker, the M5 must be able to run around a racetrack on a very hot day without warning lights starting to flash. “This is a big demand, a big challenge, for a car with 600 horsepowers.”Häcker and the other M Division engineers present have obviously been told not to discuss the engine and its outputs in any detail (see sidebar). The purpose of hauling 18 carefully selected journalists from around the world to the Miramas proving ground, it’s becoming clear, is to tell the M xDrive story.And it is an interesting tale. “When we started with the car, about four years ago, there was a discussion,” Häcker recalls. “Shall we do a standard-driven (rear-drive) car, shall we do a four-by-four car, or shall we do both variants… or do we have any other idea?”“This is the other idea, the new idea,” he says, indicating the M5. “The new idea I think is a very special one.” 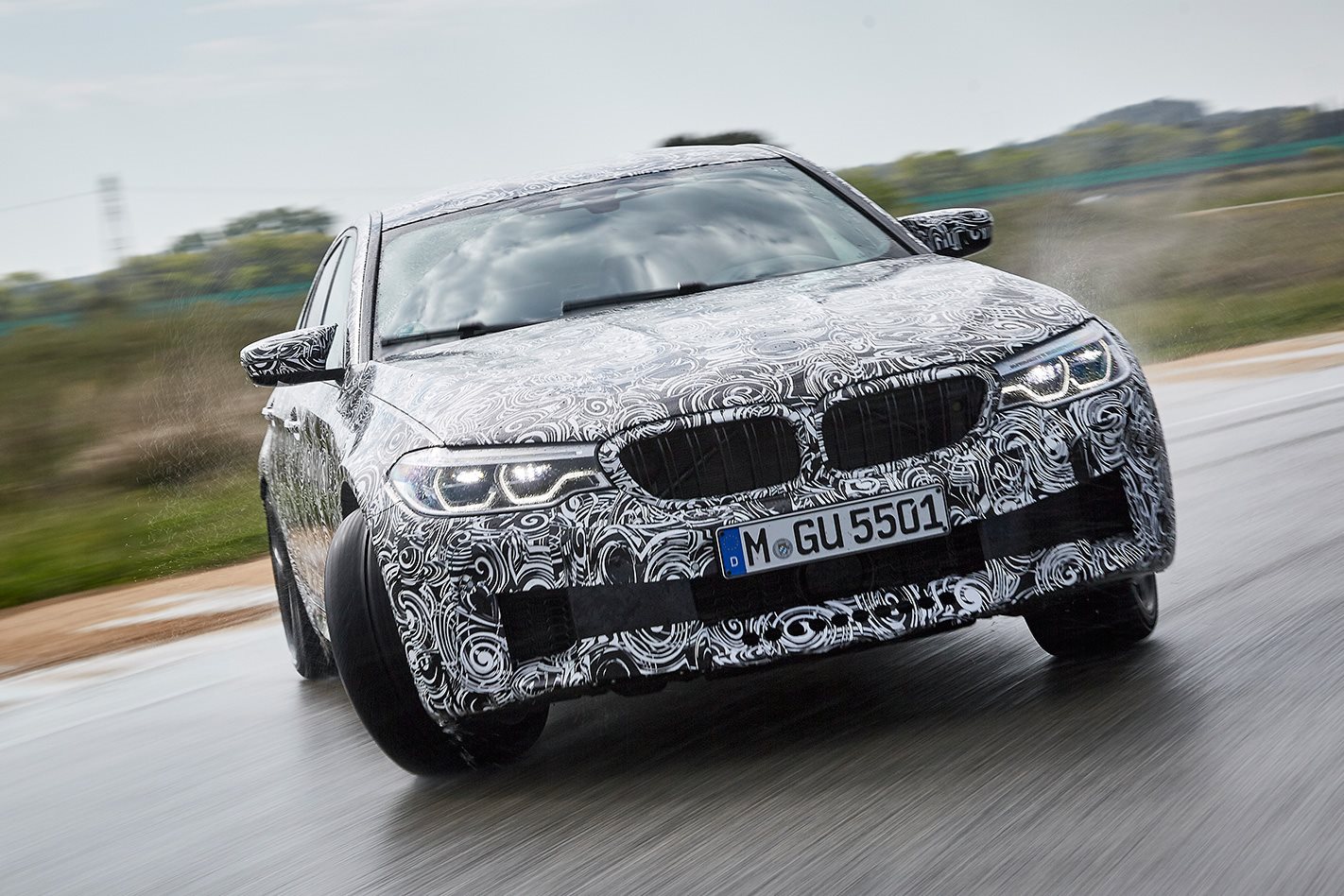 The new M xDrive system gives the new M5 the choice of all-wheel or rear-wheel drive. It’s simple to access, too. All it takes is a long press on the DSC button in the centre console to deactivate the electronic stability control, then a tap on the centre screen menu or a twirl and press of the car’s iDrive wheel to select ‘2WD’. This completely disengages the clutch in the transfer case that otherwise directs torque, as required, to the front axle. Compared with the deliberately complex procedure to do the same thing in the car that will be the new M5’s deadly rival, Mercedes-AMG’s E63 S, it’s a quick and straightforward process.    But ‘DSC Off 2WD’ is just one of the M5’s five driving modes. The start-up default selection is ‘DSC On 4WD’, a setting for everyday driving. A short press on the DSC button selects both ‘M Dynamic Mode’, which makes the electronic stability control less inhibitive, and ‘4WD Sport’, which further increases M xDrive system’s ever-present torque-distribution bias to the rear wheels. In ‘DSC Off’ all three M xDrive modes – ‘4WD’, ‘4WD Sport’ and ‘2WD’ are available. 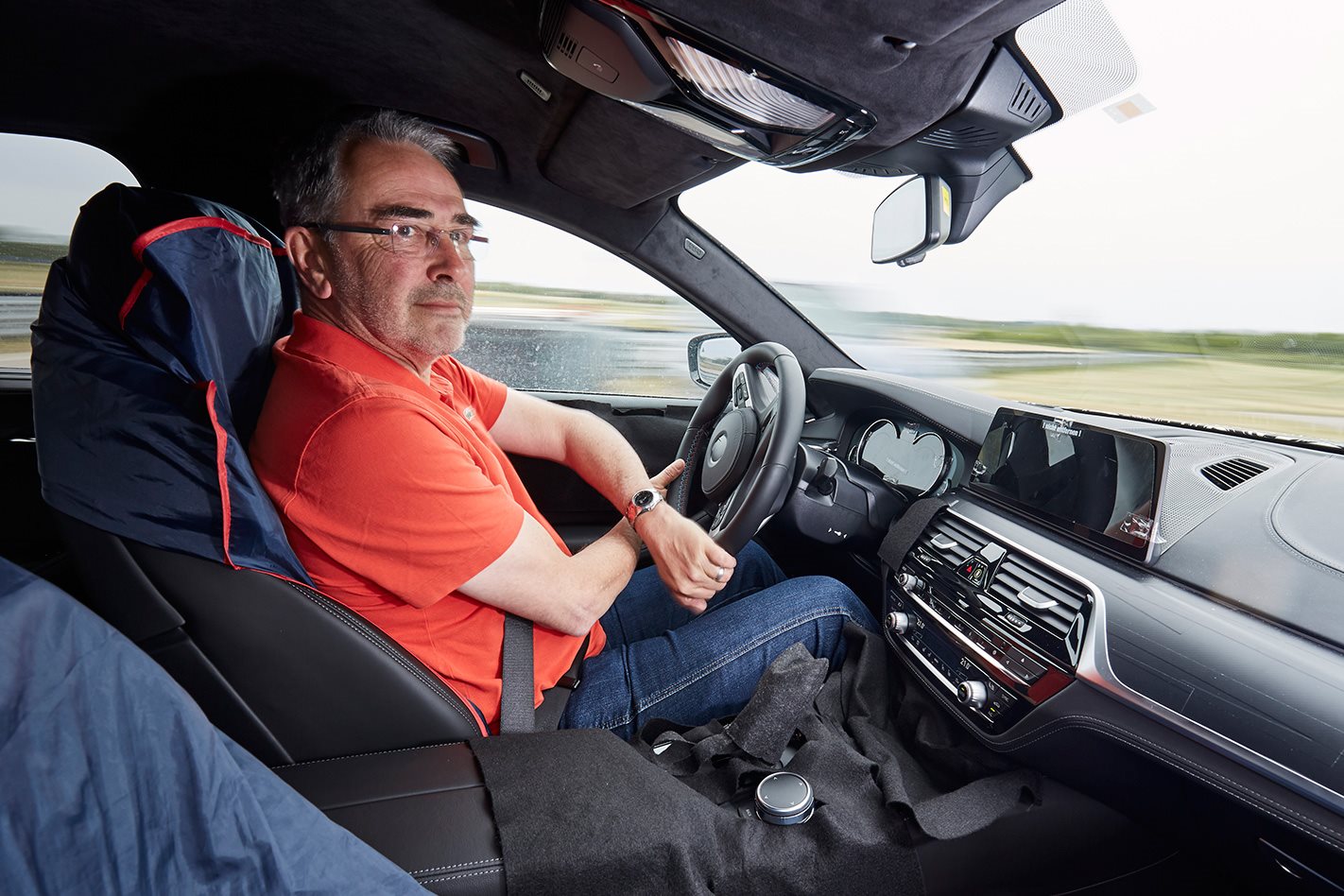 So the new M5 is basically an all-wheel-drive car, with a sideways and smoking rear-drive option. According to Häcker, the G30 M5 is quicker in ‘2WD’ than the rear-drive F10 M5 it replaces. Part of the reason is that despite the addition of all-wheel drive, the new M5 is lighter. By exactly how much he’s not telling.What Häcker will say is that the new M5 can rip from zero to 100km/h in “less than 3.5 seconds”. This is around a second quicker than the current M5, which Wheels has clocked at 4.4 seconds. And a sub-3.5 second time also happens to be right in the same near-supercar acceleration league as the E63 S.    “Finesse” is the first word into my notebook after driving two prototype M5s, one with 19-inch winter tyres on a tight, wet test track, the other with 20-inch Michelin Pilot Sport rubber on a dry handling circuit.There’s great harmony in the way the car’s chassis and drivetrain interact, making it terrifically user-friendly. Dynamics this cohesive never happen by accident…Throttle response is precise for a turbo, making the M5 easy to manage even in 2WD mode in the wet. In the 4WD modes the quick steering’s feel is utterly unpolluted the by the activity of the all-wheel-drive system.These impressions are reinforced during laps around the dry handling circuit at the Miramas proving ground. The steering is a huge improvement over the F10 M5, and the teamwork of engine and auto is flawless. The car’s drive out of slower dry corners is huge, its ceramic brakes are tireless and the stability at high speed is superb. 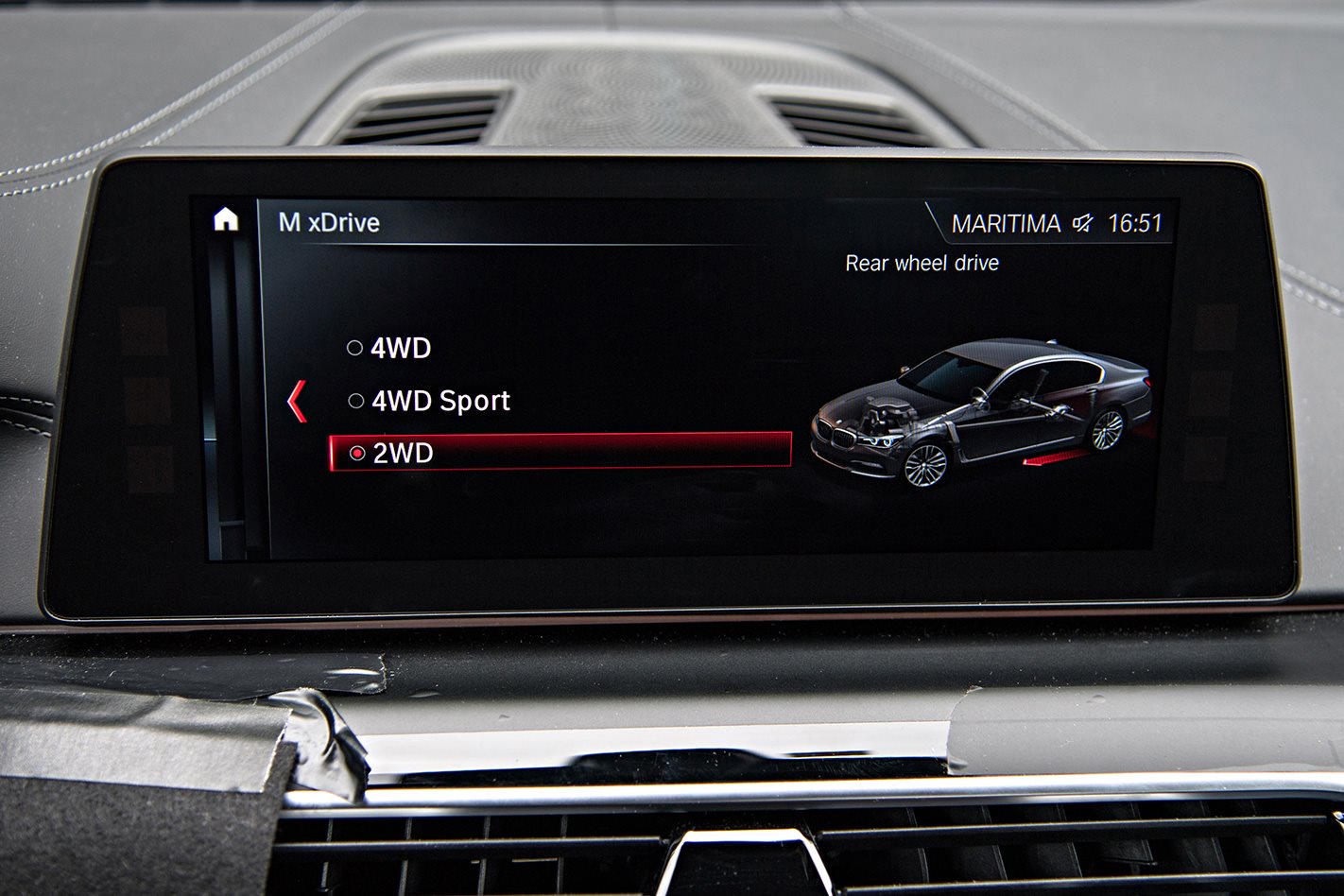 Selecting MDM and 4WD Sport makes the M5’s limits amazingly approachable. This mode permits quite large rear-tyre slip angles, but managing the oversteer ain’t a problem.The M5 inspires confidence. Too much, in my case. Working step-by-step through the different driving modes, we finally arrive at ‘DSC Off’ and ‘2WD’… and near the end of the lap I half spin after a failure to completely catch the drift while driving out of one of the slow corners.While a proving ground is the perfect, consequence-free place to make mistakes, it’s not the right environment to arrive at a definitive verdict on a car. For that you’ll have to wait for the new M5’s arrival in Australia in March or April 2018, and the Wheels comparison that will inevitably follow.But what I’ve heard, seen and experienced at Miramas makes me suspect that BMW’s M Division has created a winner.

Ask M Division engineers about the new M5’s maximum outputs and the answer will be the same every time. “We have about 600 horsepower and 700 Newton metres.” The reluctance to disclose is understandable. The men from Munich don’t want to provide the guys at Affalterbach, home of Mercedes-AMG, with a firm target to trump.

The new M5’s engine is an update of the current V8, with new turbochargers and fuel injectors, plus a redesigned exhaust system. More than this, the M engineers aren’t telling… 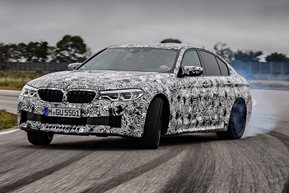 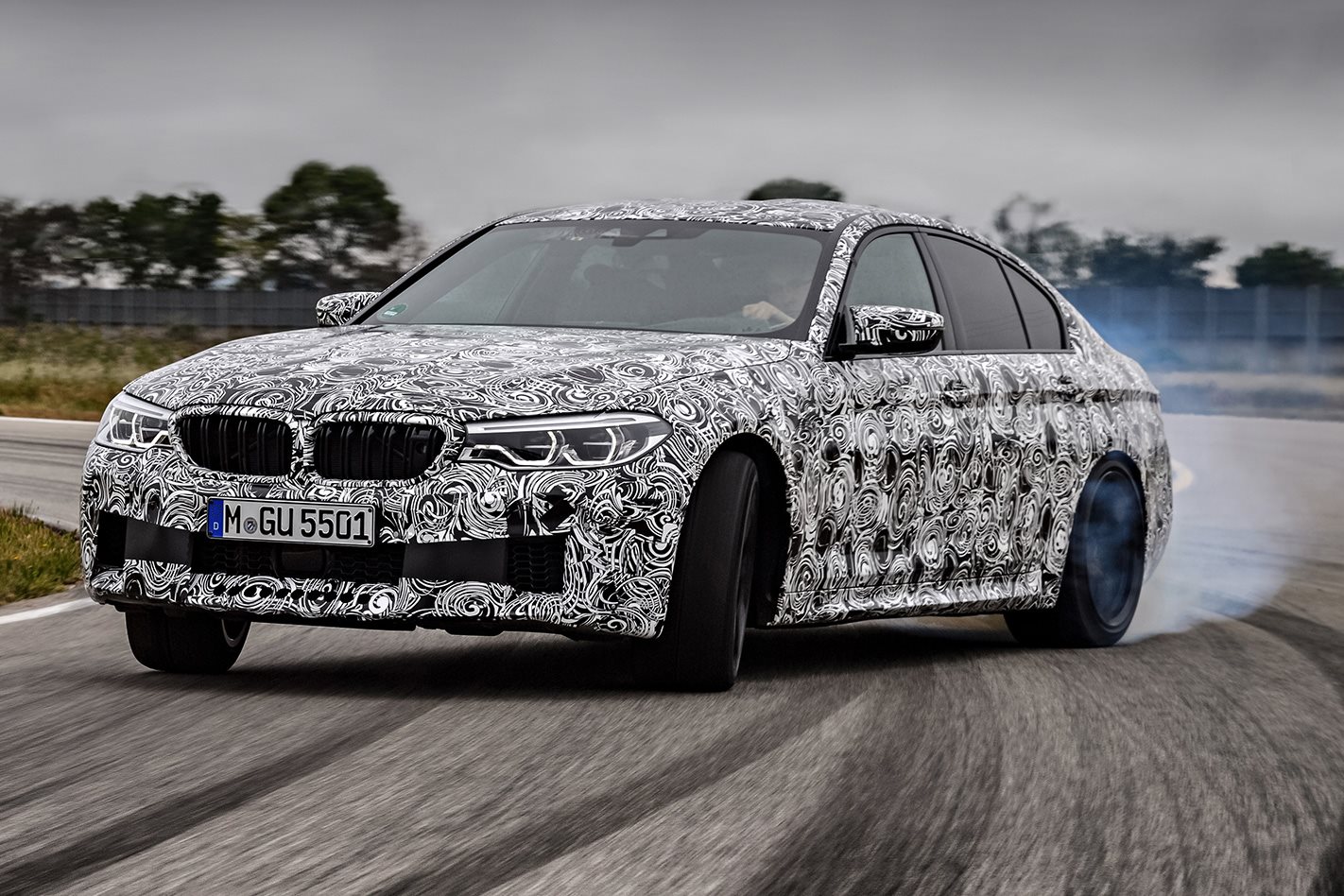 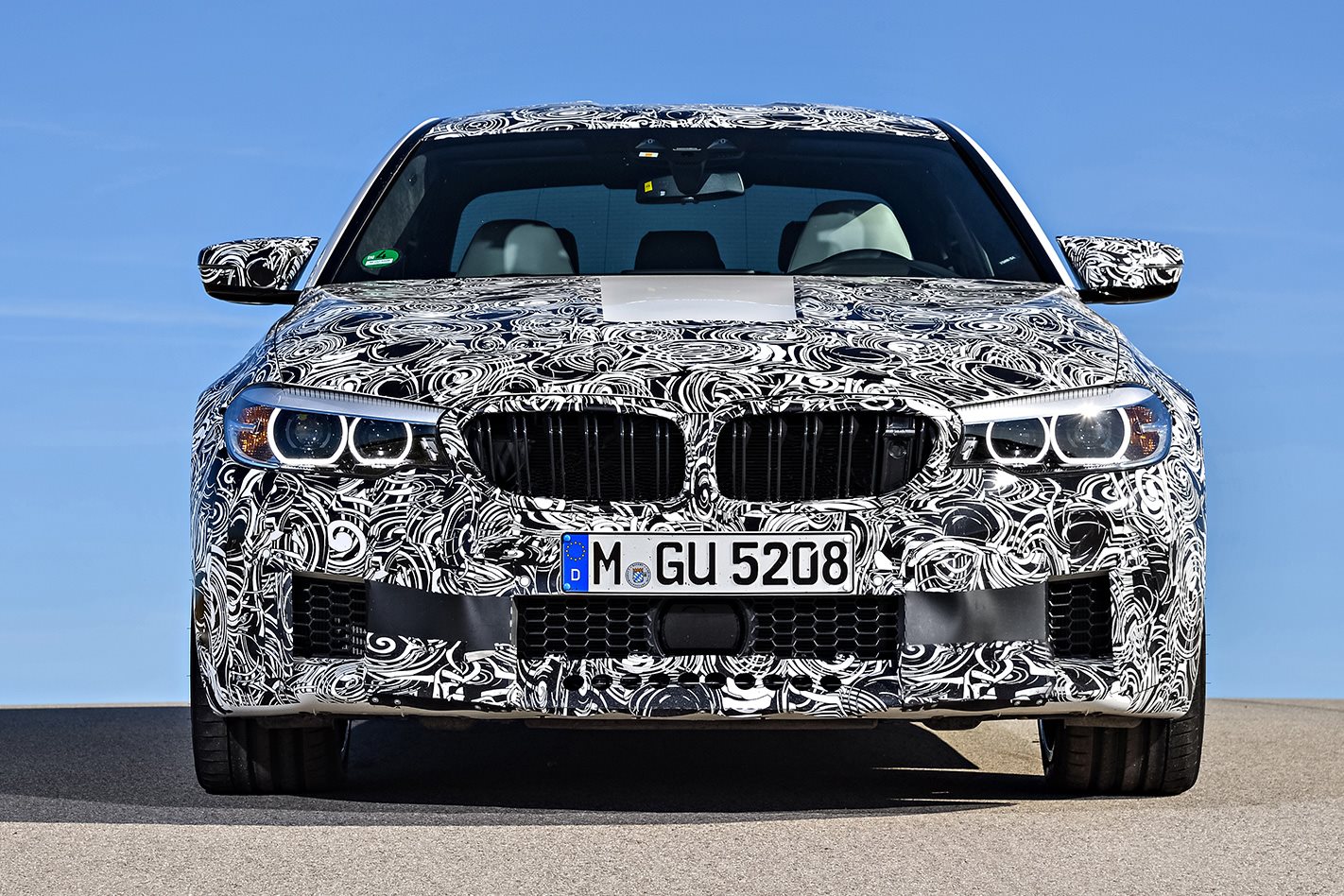 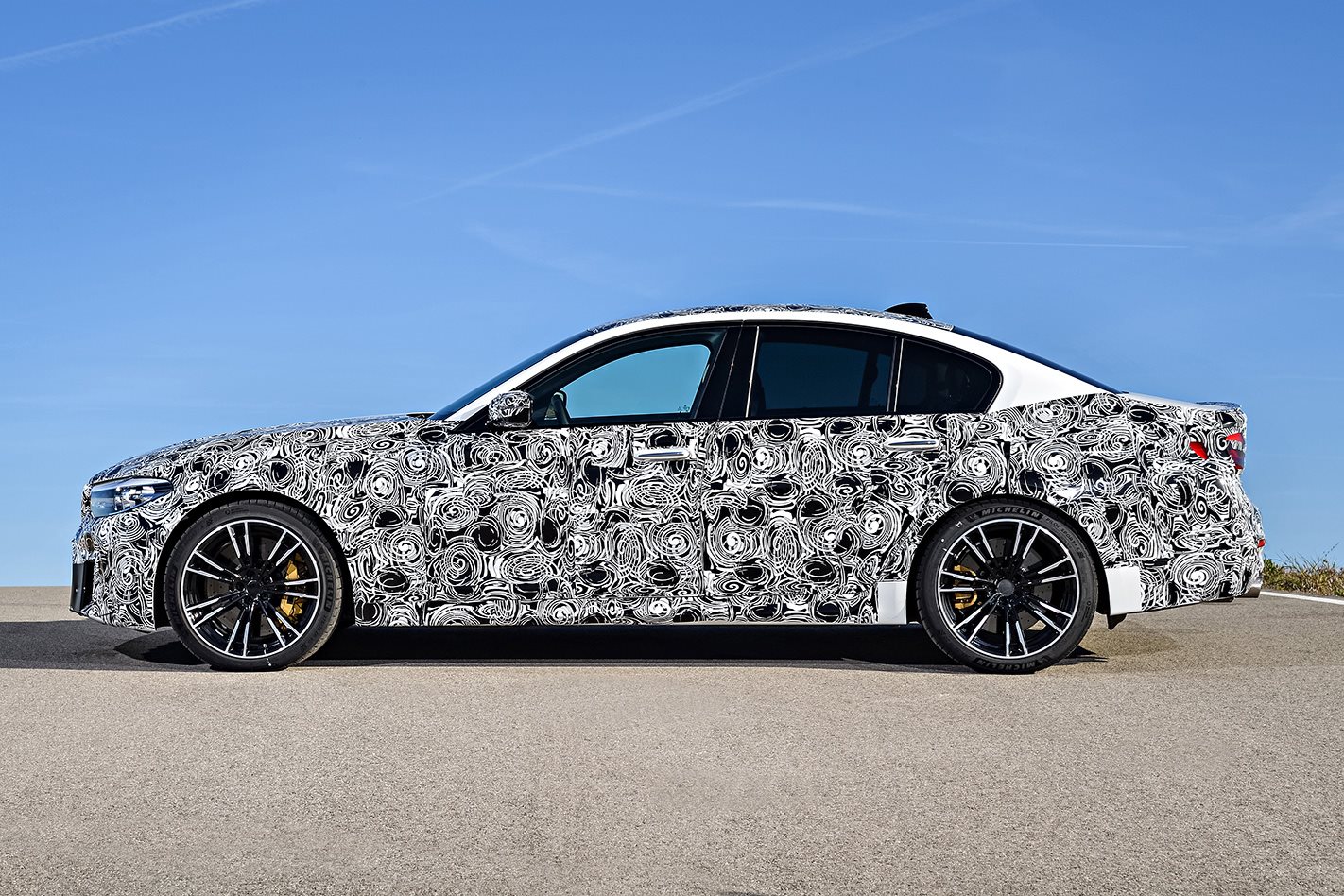 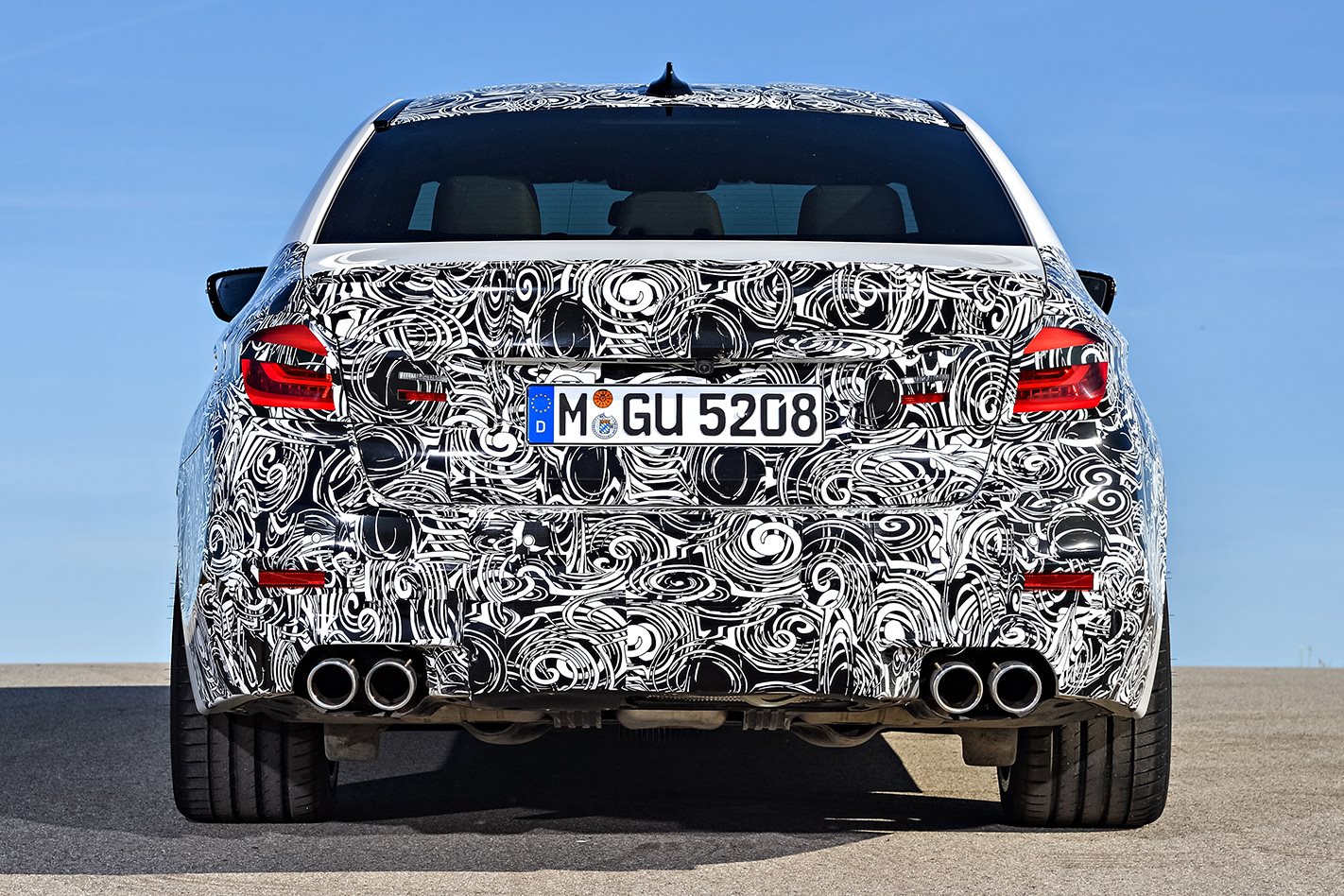 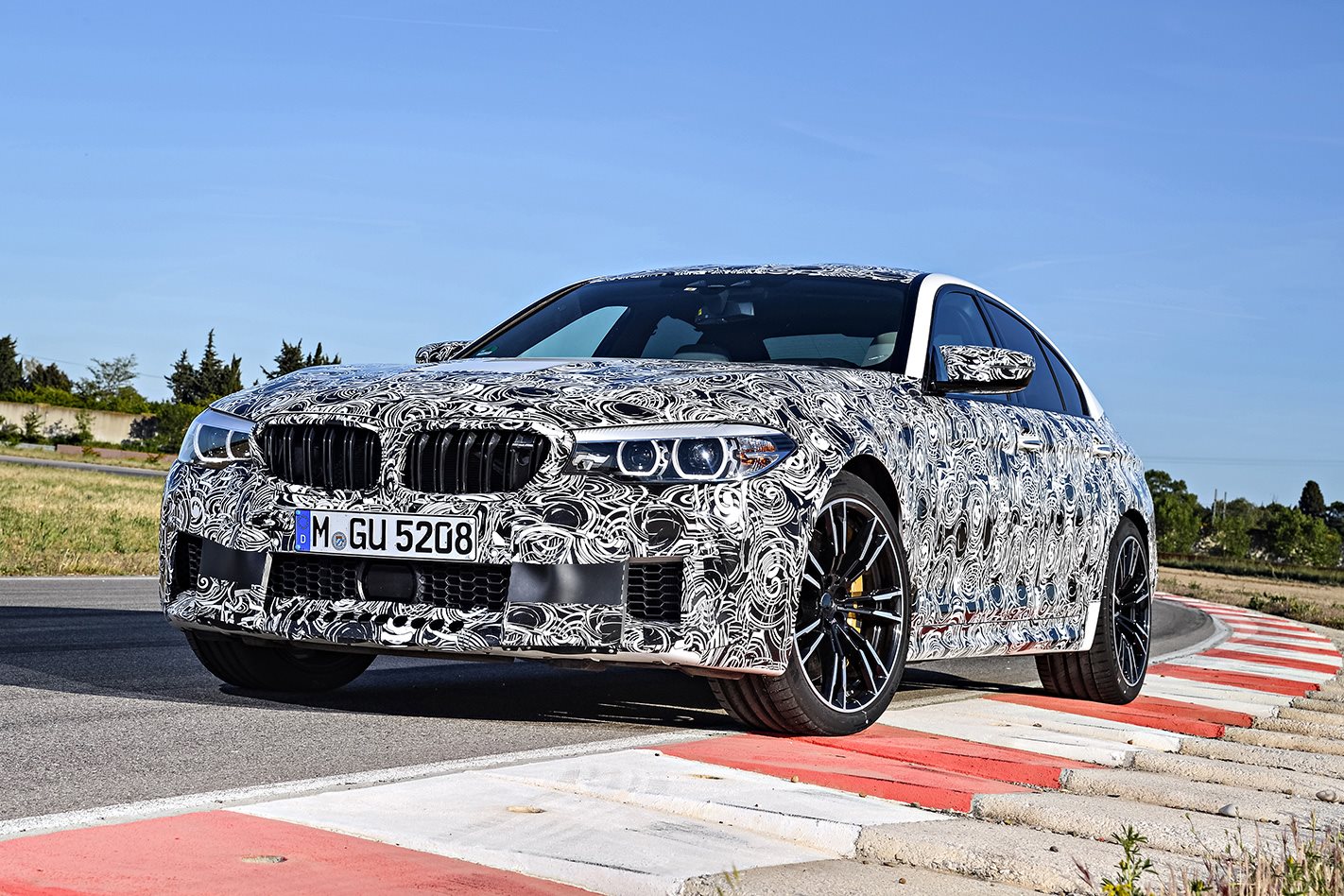 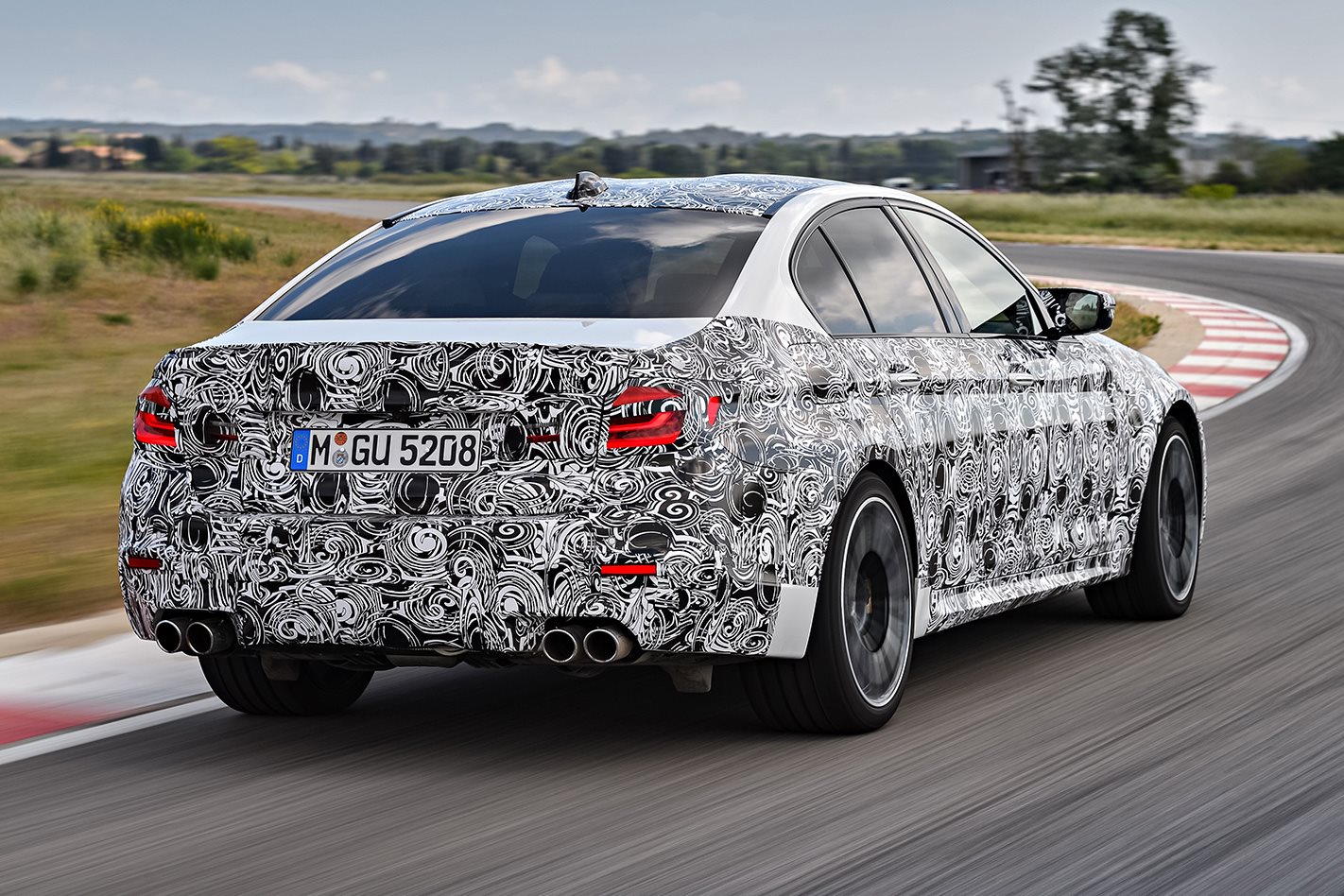 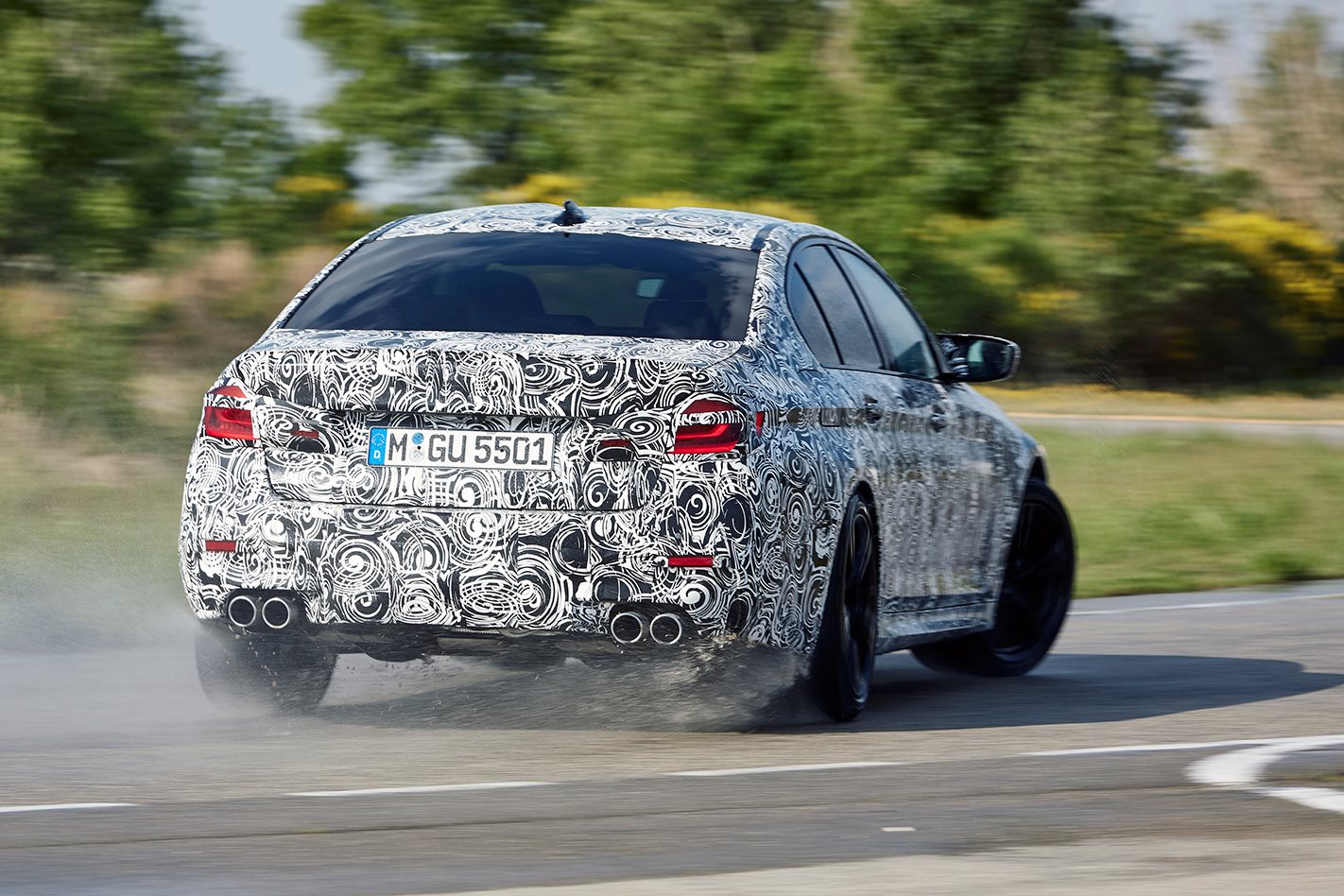 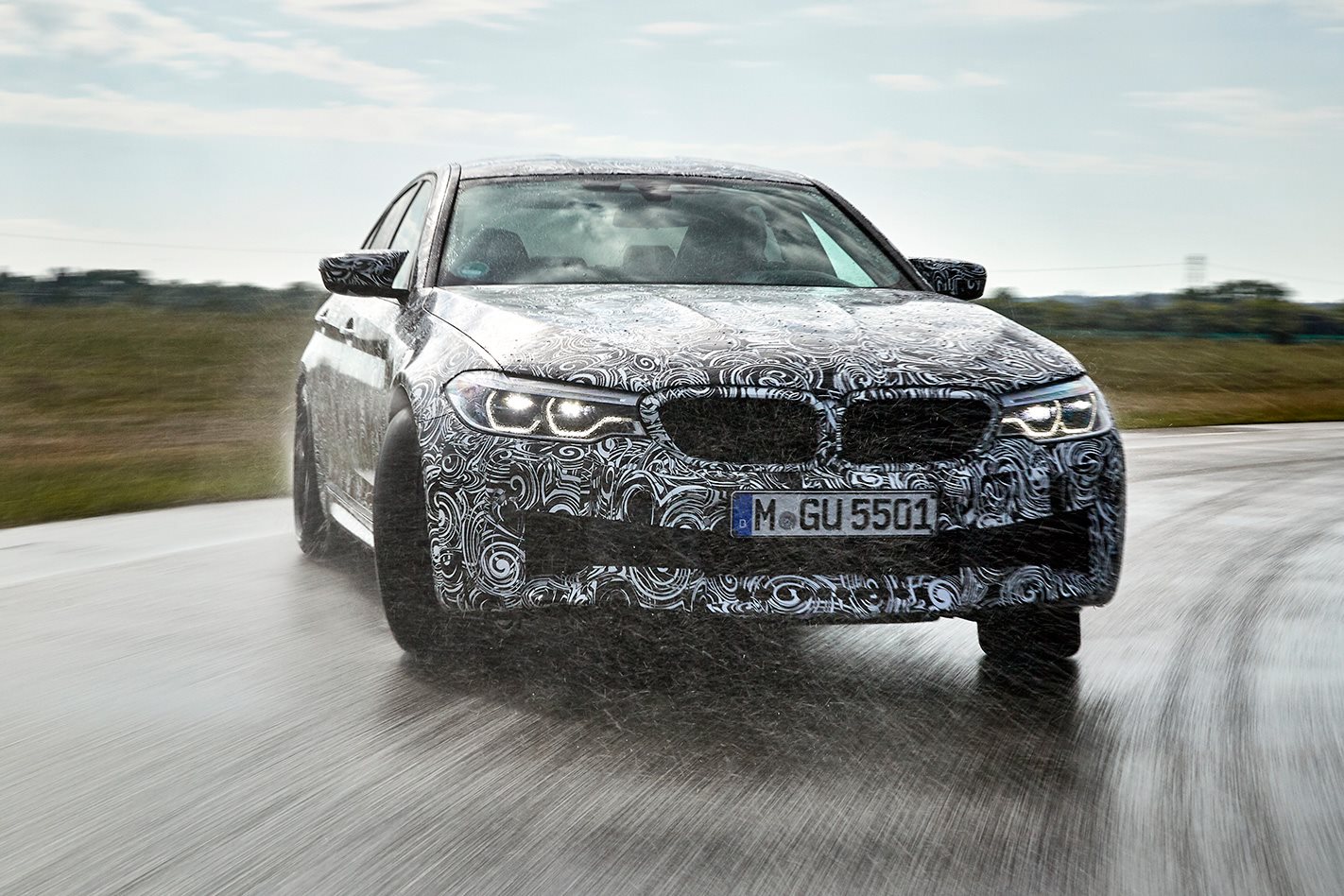 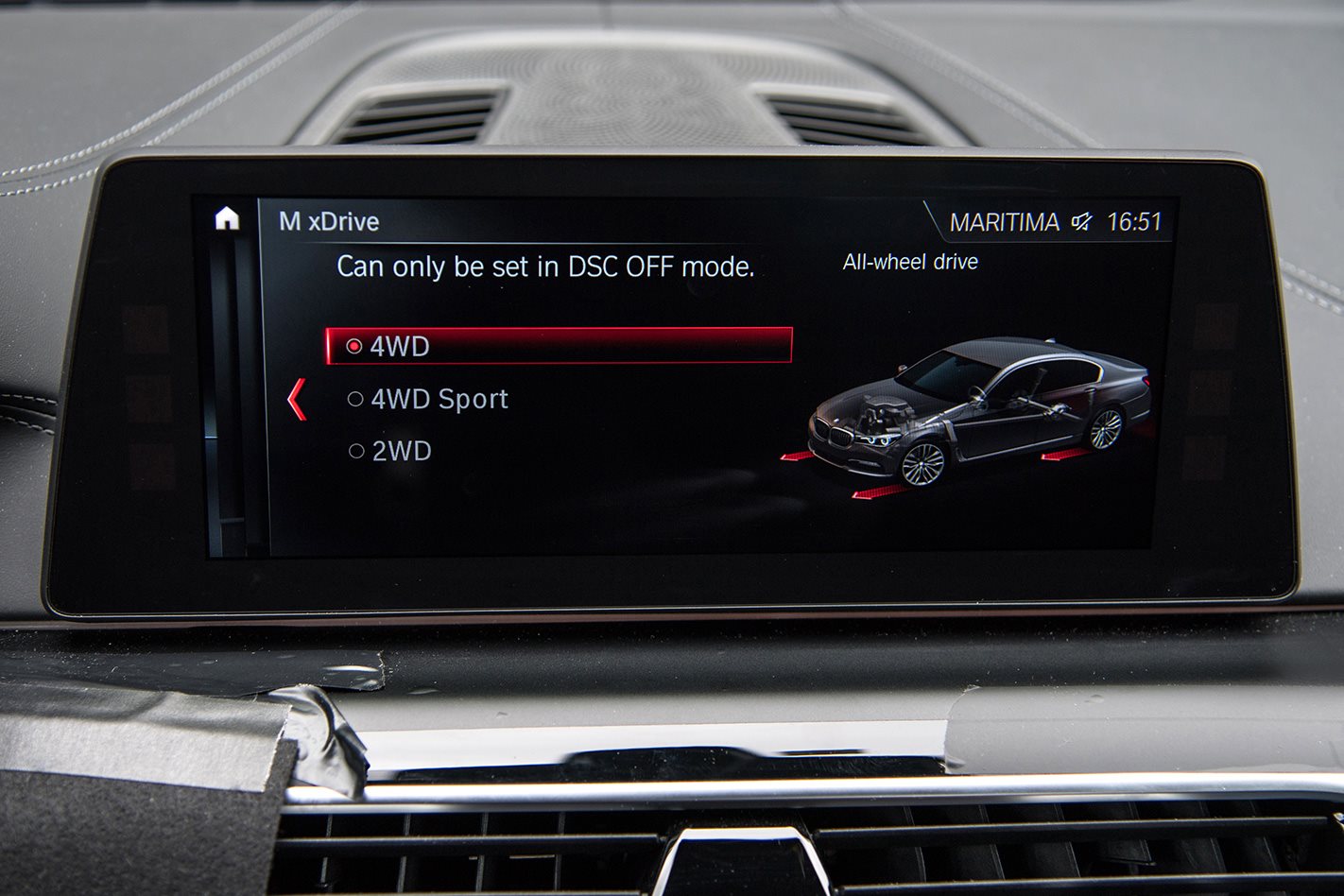 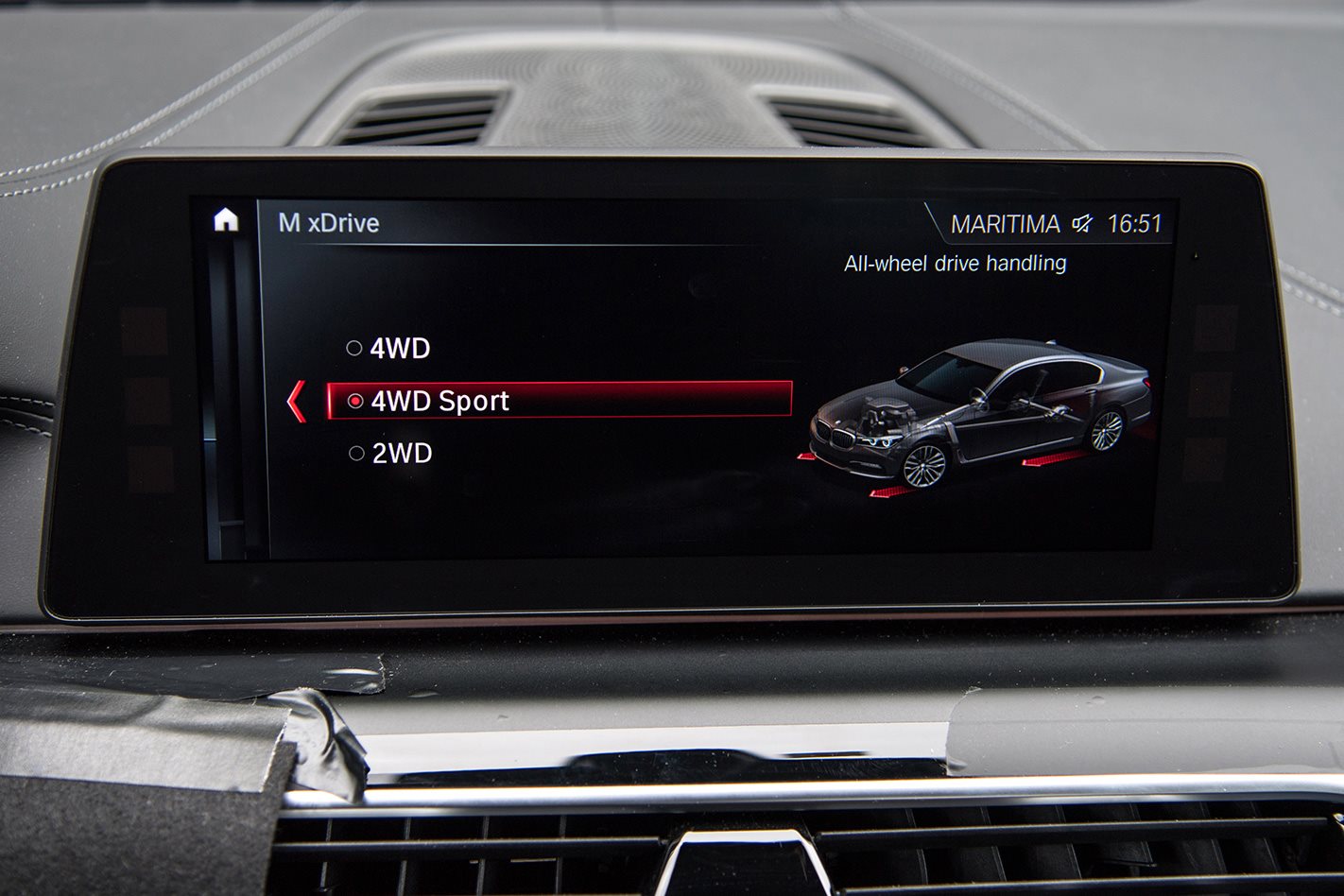