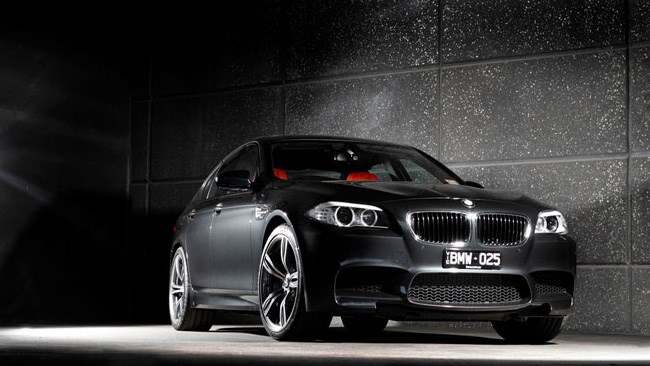 Curiously for a drive program conducted exclusively on a race circuit, three BMW staff make asides that the M5 isn’t really a track car. But despite the veiled concern, it’s little wonder the M5 feels at home on a fast circuit.

At 250km/h the big BMW is covering 67.5 metres every second. The 200 metre braking marker flashes by in my peripheral vision as the speed limiter finally softens the mighty twin turbo V8 at an indicated 267km/h. The six-piston front calipers bite hard into the 400mm cross-drilled rotors turning 4488kJ of kinetic energy into 1.1g of braking force and around 400-degrees Celsius. Lap after lap the brakes heroically shed 70km/h before the M5 dives into the 180km/h Turn One of the Phillip Island race circuit – home of the Australian round of the MotoGP.

The hydraulic steering, set to its sharpest of three settings, faithfully points the M5’s bluff nose into the corner as the 265/35 R20 front tires find amazing turn-in grip. With the suspension in the firmest and sportiest setting, the 1945kg BMW sits remarkably flat, and feels like it’s working all four corners equally. By the apex I’m searching for the carpet again with the throttle pedal and the 412kW and 680Nm is starting to make those 295/30 rear tires squirm on the dry tarmac.

Disable both traction and stability control systems and you can paint black lines all the way through fifth gear and up to 150km/h. On the track you want total control in the slow or medium speed corners as even in the MDM setting, ESP is cutting power aggressively on corner exits. However, on the circuit’s three high speed corners there’s so much weight moving around that a little electronic safety net is no bad thing. After one fearful stab of opposite lock catches a 170km/h moment, I opt for the MDM setting for the remainder of my laps.

Curiously for a drive program conducted exclusively on a race circuit, three BMW staff make asides that the M5 isn’t really a track car. But despite the veiled concern, it’s little wonder the M5 feels at home on a fast circuit. According to Brian Watts, sales and marketing boss for the M division, the F10 M5 was, “specifically designed at the Nurburgring. We spent more time at the Ring is this car than any other in M history.” Then Watts got all coy about a specific Nordschleife lap time, suggesting it was sub-8 minutes and that perhaps I could “Google it”. The search engine claims a time of 7:55, which seems about right after 30 laps of the 4.4km Phillip Island circuit. If that number is accurate, the F10 M5 is 18 seconds faster per lap than the V10 E60 M5 and 10 seconds quicker than an E92 M3. Of BMW’s back catalogue, only the lighter and semi-slick-shod E46 M3 CSL is quicker with a 7:50 lap.

The M Drivers Package offered in some markets (but still being assessed for Australia) raises the speed limiter from 250km/h to 305km/h. But what if you could let the M5 all the way off the leash? Officially there’s no such number, but cornered later over a beer an M insider says the F10 M5’s ultimate top speed is at least 340km/h – deep into supercar country. And given the way the car head butts its Australian-market 250km/h limit in fifth gear, there’s no reason to doubt that boast.

But more than lap times and top speeds, the M5’s amazing performance can be defined by the sheer accelerative force on display from 100-200km/h. The F10 M storms through that benchmark in 8.7 seconds and shows no let up as 200km/h flashes up on the head-up display.

Unlike most turbocharged engines, the M5’s twin-turbocharged V8 doesn’t fall off a cliff as the revs scale the range; if anything it kicks harder and harder as the revs build. Peak torque is an ever-present and dominant force from 1500rpm all the way to 5750rpm, while power swells from 250kW at 3500rpm to 360kW by 5000rpm. A thousand revs later all 412kW have reported for duty and they stick around until 7000. And with 600Nm available from just 1200rpm, the M5 offers crushing performance from just off idle to redline.

Despite the muting effects of two big turbos, the 4395cc engine sounds obviously like a V8, but is more subdued than the bombastic 5.5-litre bi-turbo V8 in the Mercedes-Benz E63 AMG.

The seven-speed dual-clutch gearbox is a willing partner around the circuit performing fast and crisp upshifts. Downshifts are rev-matched but not lightning quick; though they don’t upset the handling balance by pinching a rear wheel with a compression lock-up. Like in the previous E60 M5, only the US market will get a six-speed manual.

After 30 laps around a fast and demanding race circuit (with another 30 lap session after lunch), you’d expect a 1945kg road car to be a steaming pile of… Instead, the M5 holds up remarkable well with only a marginally spongy brake pedal to report after the second session. Not once do engine temps spike, though back in the pits you can hear the radiator fan working hard to dissipate the heat build-up. Even the M5’s big Michelin Pilot Super Sport tires cope well with regular fast lapping, feathering the front shoulders but not chewing them out completely. The rears, however, quickly suffer when asked to drift for the cameras.

BMW may be right that few people will take to the track in their F10 M5, but you can do so safe in the knowledge that it’ll cop the punishment and you’ll have a ball in one of the baddest sports sedans on the planet. And there would be few more terrifying sights at a track day than having the double kidney grille of a 1945kg M5 filling your mirrors.

Check out the April issue of Wheelsmagazine (on sale March 21) as the new BMW M5 goes up against German, British and Australian muscle car rivals. 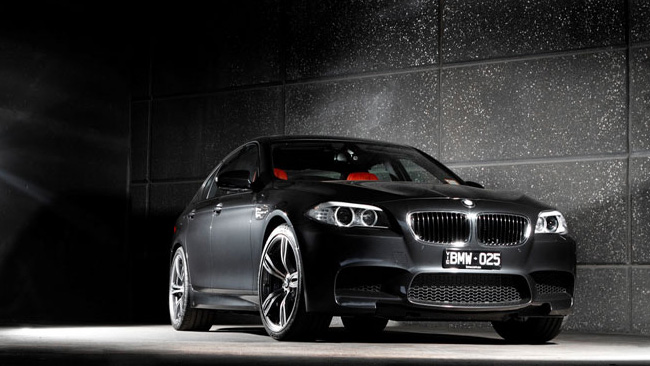 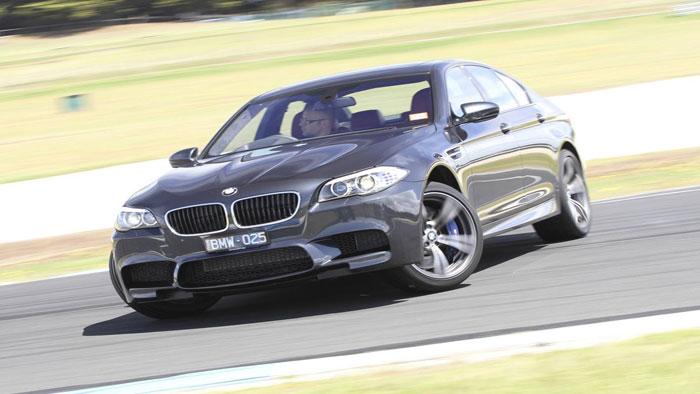 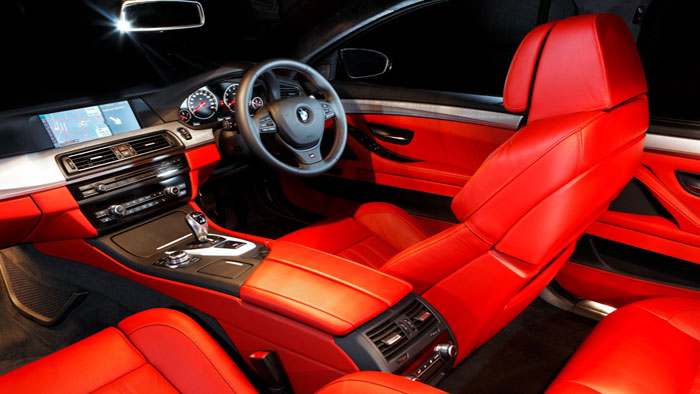 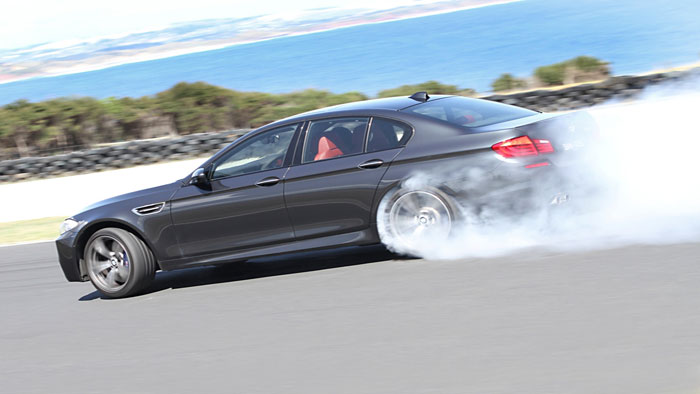