Prototypes of the 2018 M5 are making more frequent appearances in the public eye As BMW readies its response to Mercedes-AMG’s 450kW E63 uber-sedan, and this latest video is our best look yet at the Bavarian brand’s all-paw heavy hitter.

Captured at the Nurburgring Nordshleife circuit in Germany, this particular prototype is especially notable for one thing: the sound it makes. There’s also the potential that this car is a development hack for a performance-focused M5 CS variant.

Though the 2018 M5’s powertrain is expected to be a 4.4-litre twin-turbocharged V8, just like the current model, expect a harder-edged, higher-pitched exhaust note. In the opening shot, it almost sounds like it’s capable of revving substantially higher than the current car’s 7500rpm redline too. Check it out.

And it’ll probably need to. In its most potent form the outgoing F10 M5’s 4.4-litre S63TU engine made 441kW and 700Nm, so the incoming F90 M5 will need to pump its output to well beyond those figures if it is to challenge the 450kW 4.0-litre V8 of the E63 S. With a rumoured move to all-wheel drive, the new M5 will also need that extra oomph just to offset the added weight of a powered front axle.

Benz’s brawler of an E63 S can leap to 100km/h in 3.4 seconds, and we’d expect the new M5 to be in the same ballpark. Power outputs are still secret, but the rumourmill has run the F90’s peak figure as high as 480kW.

And with the newly-launched BMW M550i xDrive boasting a 0-100km/h stat of 4.0 seconds with ‘just’ 340kW (that’s three-tenths faster than the now-departed F10 M5), its brawnier M5 brother will definitely be deep into the three-second range. 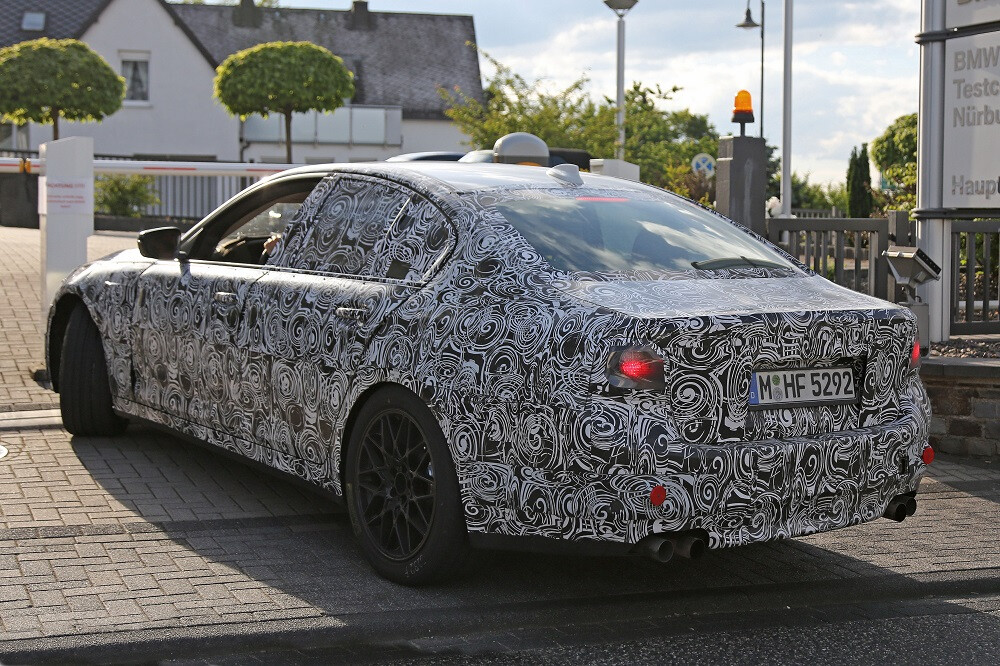 Though it’s set to transition from a RWD layout to AWD, the next M5 is expected to retain some semblance of traditional rear-driven dynamics. Expect a tweaked version of BMW’s xDrive AWD tech with a more pronounced rear-axle bias, perhaps augmented by a dedicated Drift Mode (like the E63) for those determined to hoon.

As for the car’s transmission, it’s possible the M5 could step away from the dual-clutch gearbox of the current model and feature a conventional torque-converter auto instead. The X5M and X6M – which also use a twin-turbo V8 driving all four wheels – utilise a traditional eight-speeder rather than a dual-clutch, so there’s precedent.

Plus there’s the recent revelation by BMW M’s marketing vice president Peter Quintus that the brand will progressively transition its models away from dual-clutch autos in favour of the humble hydraulic automatic. You can safely wave goodbye to manual M5s for the future as well - the demand simply isn't there anymore.

Hooking powertrain and drivetrain together will be an all new chassis with extensive use of aluminium, magnesium and carbon fibre elements to shave weight and compensate for the AWD system’s extra mass.

Expect to see the F90 BMW M5 at the Frankfurt Motor Show in September, with an Australian launch likely to occur in the first half of next year.