Peugeot is about to drop a small but powerful explosive device into the hot-hatch market with its new 308 GTi 270. Stand well back.

WHAT IS IT?
A WRC car for the road… well not really, but the Peugeot 308 GTi does feel a bit like that when you’re slurping up its gushing turbo rush. Peugeot has miraculously produced a 1.6-litre engine that can make 200kW, and that throws you at 100km/h in six seconds. It makes the less powerful VW GTI Performance, with its 2.0-litre engine, look a bit lame.

WHY WE'RE TESTING IT
Because this is the latest and greatest thing in hot-hatch world, and has technology - from its tricky limited-slip diff to its specifically powerful engine - that moves the goalposts or repaves the playing field for this segment. MAIN RIVALS
The Golf GTI Performance gives up quite  few kilowatts, but just pips the Pug for torque - 350Nm to 330Nm. The Golf is slightly cheaper than the go-faster 270 version of the GTi, at $48,490, but it is going to feel just a tiny bit slow in comparison. The other French contender is the obvious bench marque, in the shape of the Renault Megane RS 265.

THE WHEELS VERDICT
We’ve only tried the 308 GTi 270 on a race track, but that certainly gave us the opportunity to see how hard it can push, and we were impressed. This is a seriously quick, extremely capable car that somehow manages to get all that power to the road without being squirrelly to drive. Another excellent hot-hatch effort from Peugeot.

PLUS: Power; fuel economy; handling; that diff; seats; interior; engine technology.
MINUS: Exterior styling could be more exciting; limited supply; no road drive yet; we have to wait until February. 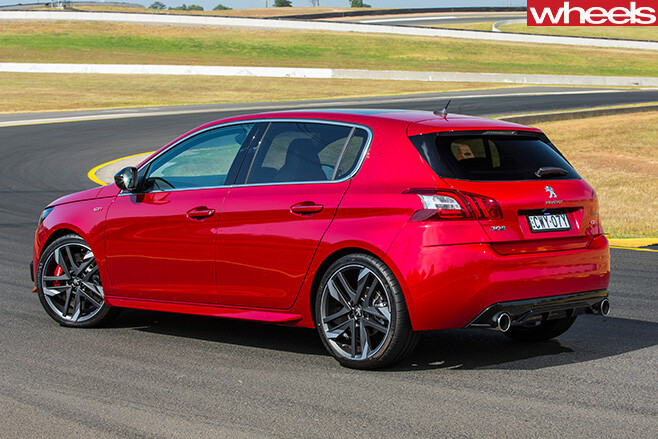 THE WHEELS REVIEW
WHAT a wondrous world we live in, where the implausible becomes possible and what we think we know has to be un-known. Logic, and the experience of driving Saabs of old and the first Mazda 3 MPS, tells us that putting 200kW through the front wheels of a car should be a bit like having your arms pulled off by a bear.

Even a basic understanding of specific power also tells us that extracting 200kW from a 1.6-litre engine requires the kind of magic only available to motorsport teams, who accept that their high-strung machines simply go bang now and then.

And yet here we are, flying around Sydney Motorsport Park in the new Peugeot 308 GTi 270 (the power figure in horsepower, which sounds even more absurd). It is running 2.5 bar of pressure through its specially developed twin-scroll Borg Warner turbo, and it doesn’t appear to be exploding. Not literally, anyway. What all that power, plus 330Nm of torque that’s on-song from 1900rpm to 5500rpm, is doing is hurling us out of corners and down straights at hilarious speeds.

With a specific power rating that Peugeot is happy to claim is in supercar territory and, with a kerb weight of 1205kg sustaining a 6kg per kW power-to-weight ratio, impressive performance is no surprise. Frankly, the 0 to 100km/h time of six seconds flat seems surprisingly high.

What’s more surprising is that we’re not struggling with bone-wrenching torque steer, or complaining about woeful push understeer through corners.

This is largely thanks to one of the cleverest limited slip differentials we’ve ever had the pleasure of torture-testing, developed by the gurus at Peugeot Motorsport  and previously seen on the giant-killing 208 GTi 30th Anniversary. It does what any such system is designed to do - apportioning torque to the wheel with the most grip - but it does it with such seamless ease, and at such speed, that it turns a potentially hairy handful into armloads of fun.

It’s so good that you can get on the throttle far earlier than in the non-diff-equipped 208 GTi we’d flung around the track earlier, and make the absolute most of all that power.

After strengthening the engine block to deal with the punishment it was about to apply, Peugeot Motorsport also waved its magic wand over the chassis, the power steering, the manual (only, hurrah!) gearbox and the brakes. The result is a car that the local office was confident enough to let people belt hell out of on one of Australia’s faster tracks, all day long, and big smiles on the faces of those who did so. 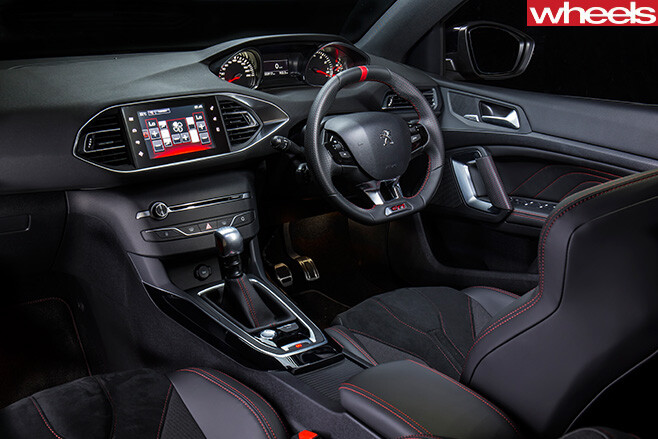 It also makes a rally-ist noise, with plenty of turbo huffing and an intake suction sound that’s like a vacuum cleaner hoovering the surface of Mars. Inside, though, it’s all plush, and typical Euro hot-hatch, with a bit more perforated leather and red highlighting. It’s a Peugeot 308, basically, but not as we know it.