The Ioniq is a unique car that comes in plain and plug-in hybrid forms, or with pure electric power.

The Ioniq is a unique car that comes in plain and plug-in hybrid forms, or with pure electric power. Hyundai Australia plans to import all of them… but the battery-mobile is the one that really stands out.

WHAT IS IT?
Small-ish front-drive eco car with a trio of powertrain options. Good-looking and obviously aero, the Ioniq is an un-weird way to embrace efficiency. It’s a five-door hatch with a pleasant and reasonably spacious interior. There’s good space for cargo, too, even in the battery-burdened Electric.

WHY WE’RE TESTING IT
In Korea for a first taste of the new Hyundai i30, Wheels learned that Hyundai Australia plans to import the entire Ioniq line-up, probably beginning from early next year. The Hybrid and Electric versions are already on sale in Korea. Both were available to sample, but we focused on the more interesting Electric.

MAIN RIVALS
Right now the Nissan Leaf is the only obvious alternative to the Ioniq Electric. This may change by the time the Hyundai launches here. The primary mission of the hybrids, on the other hand, is to take on the Toyota Prius.

THE WHEELS VERDICT
The Hyundai Ioniq Electric is a taste of Tesla at an affordable price. It’s good looking and surprisingly quick. While its handling could be better, the Hyundai isn’t an unpleasant drive. For some, its real-world driving range will be a deal-breaker. Others will embrace the challenge of using this tailpipe-less car as a daily driver.
Plus: Lively performance; energy efficiency; exterior; interior practicality; quietness; affordability (probably)
Minus: Handling; real-world range won’t meet all needs; lack of EV infrastructure in Australia 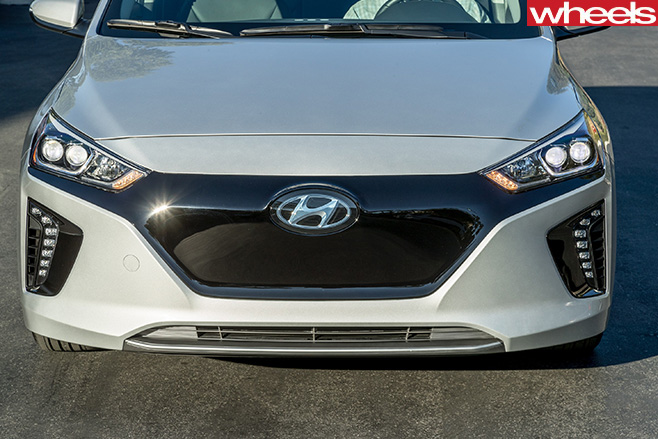 THE WHEELS REVIEW
It’s not quite the Ludicrous mode of a Tesla Model S, but the Sport button in the centre console of the Hyundai Ioniq does make it quite a bit more lively. The five-door hatch accelerates with real eagerness. And near silence, like other electric cars.

On the broad and modern streets of Songdo, east of Seoul, the Ioniq usually leads the charge when traffic lights turn green. Slowing for reds I experiment with the Hyundai’s driver-variable regenerative braking.

Even though it has a fixed single-speed transmission, there are paddle shifters behind the Hyundai’s steering wheel. Tapping the toggles up or down through four levels of regenerative braking. Increasing the regen feels very much like shifting down through the gears in a conventional car with a double-clutch or torque-convertor auto. 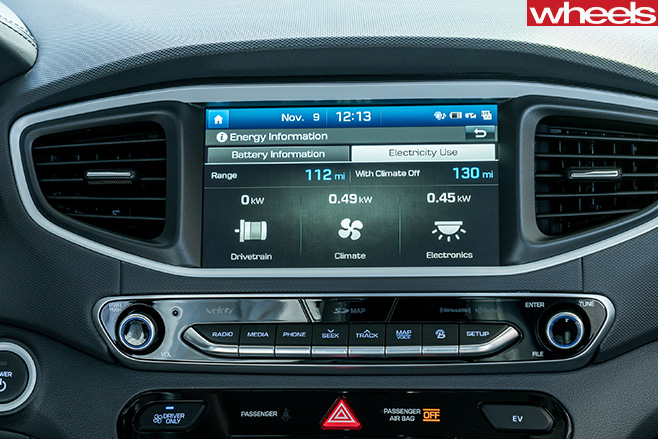 Joining the tollway towards Incheon Airport, I leave Songdo behind. The Ioniq Electric is limited to 165km/h, but acceleration above 100km/h or so is fairly leisurely. To preserve charge, I try the other modes heading up and over the suspension bridge and long causeway to Seoul’s main international air hub. Normal is fine, but range-boosting Eco absolutely kills the Ioniq Electric’s spirit.

While the Hyundai’s official driving range is 280km, testing done by credible outfits in Europe indicates the real-world distance is more like 180-200km. Worth noting, too, is that the Ioniq Electric can accept 100kW DC fast charging, which means an 80 percent charge top-up can be delivered in under 30 minutes. It’s too bad that Australia lags much of the rest of the developed world in installing electric vehicle infrastructure.

The Hyundai rides reasonably well and its steering is more consistently weighted than that of the Ioniq Hybrid I’d driven two days earlier. But, even though these Korean roads aren’t challenging, the Electric’s handling is obviously nothing special. 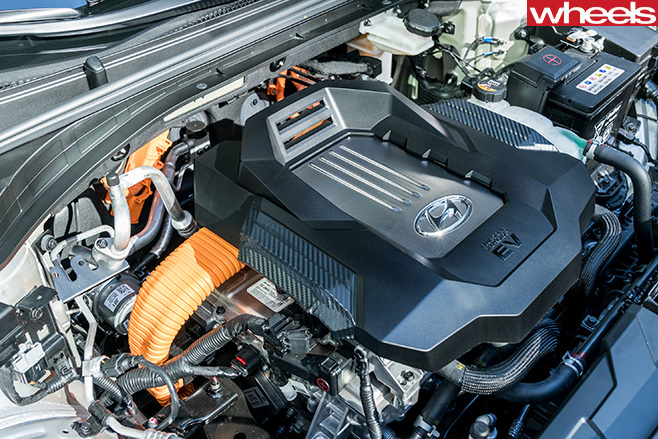 But there’s plenty to admire. Though the Electric has a bulky 28kWh lithium-ion polymer battery pack beneath its rear seats and cargo bay, the luggage compartment is still 350 litres. The interior is good; nice instrument panel, good wheel, sweet seats, and the clarity of the centre screen in this Korea-spec car is outstanding.

That screen is one of the reasons the Ioniq hasn’t made it here earlier. Hyundai won’t have an infotainment system for the Ioniq that works in Australia until late this year. It will be ready just before production of the Ioniq Plug-in Hybrid in right-hand drive begins.

Hyundai Australia high-ups think the maximum-impact strategy is to wait until all three versions of the Ioniq are ready to launch at the same time. This will be possible just before Christmas, according to chief operating officer Scott Grant, but this is a dumb time to introduce a new car. So an early 2018 Hyundai Ioniq launch is the preferred option.

While it’s way too early for Hyundai to talk pricing for the Ioniq Electric, the car does undercut the Nissan Leaf – the world’s best-selling electric car ever, by the way – in other markets. If they can do the same in Australia, the Hyundai will wear a price-tag around the $37,500 mark. This would make it the least ludicrous electric in the land.