Jaguar’s scaled-down premium SUV brings the design sensibilities of its trendsetting sibling to a new part of the market.

E-Pace is Jaguar’s stylish compact SUV that follows in the footsteps of the British brand’s breakthrough high-rider, the F-Pace.

This is our first chance to drive E-Pace in Australia and explore the local line-up, which covers a huge amount of ground across 38 variants. 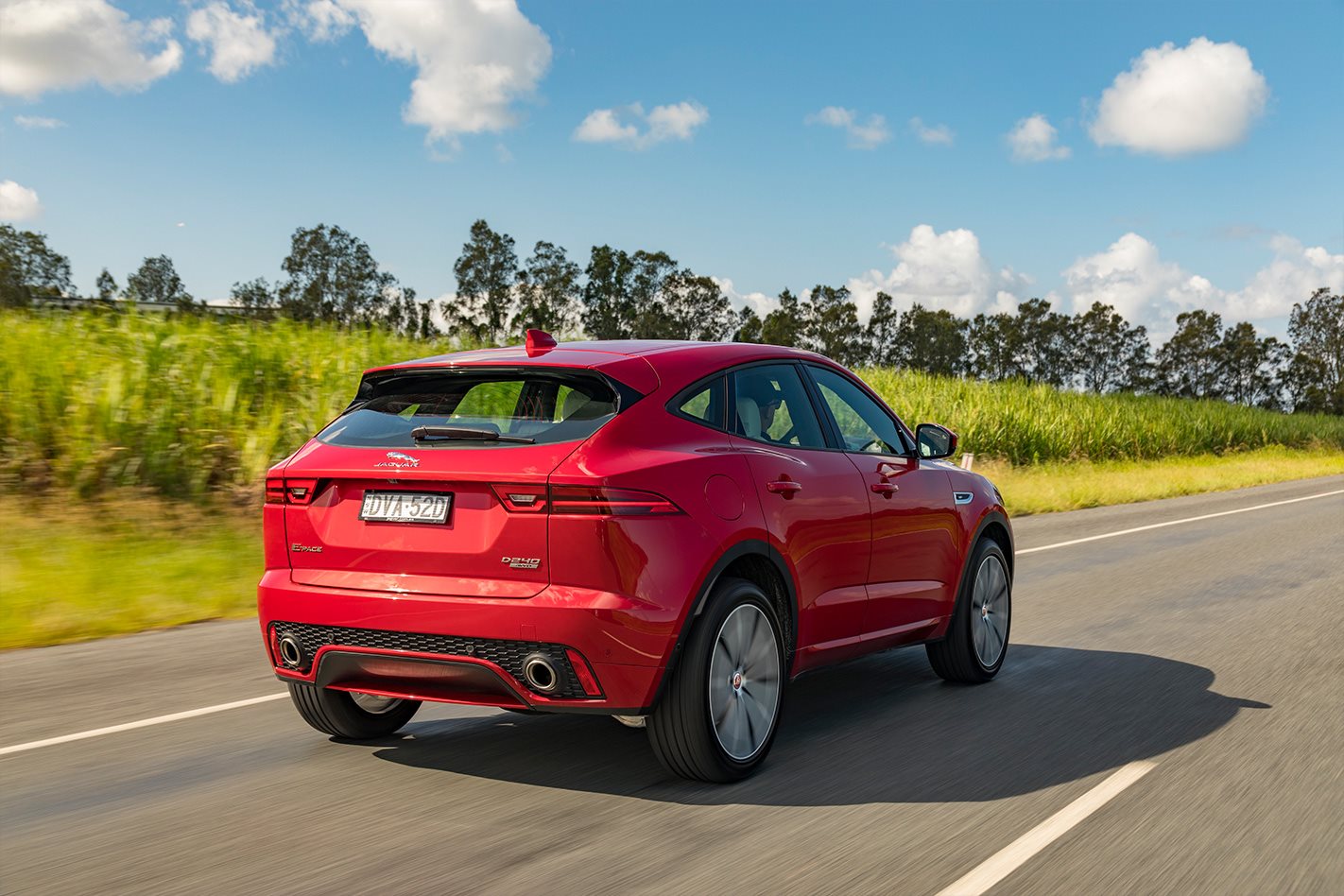 E-Pace is a uniquely individual alternative to the go-to premium options from Jaguar’s German counterparts. Its heavyset underpinnings blunt its performance potential to a degree, but there’s still a lot for drivers to enjoy and a level of personalisation on offer – for a price – that no rival can match.

TAKE a deep breath, because the next few paragraphs are going to be dense. The Jaguar E-Pace has arrived in Australia with a model range so broad the British company says its one compact SUV will compete with the BMW X1, X2, X3 and X4, and the small to mid-size SUVs from Audi and Mercedes-Benz to boot. 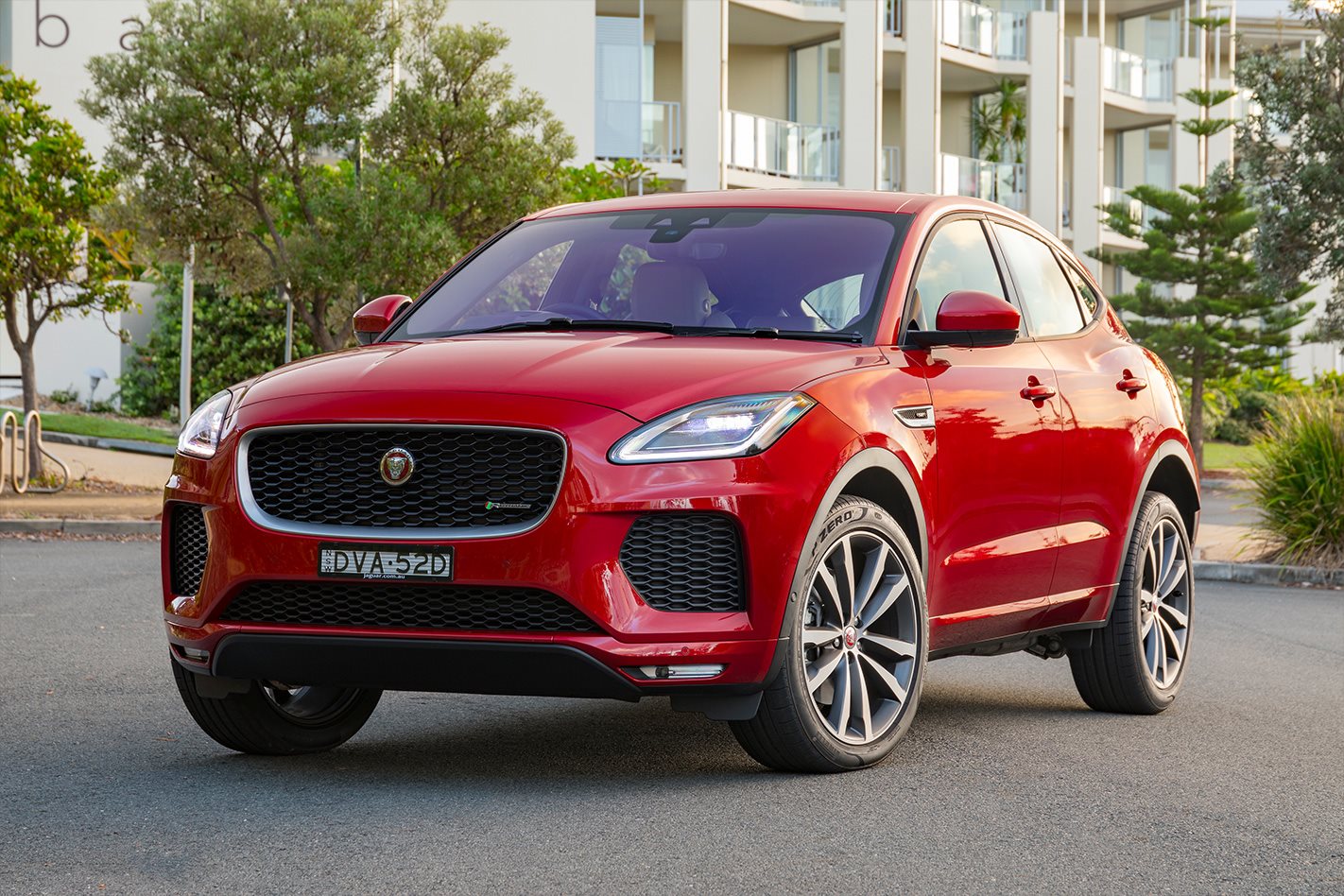 Pricing starts at $47,750 and spans an almighty spectrum of 38 variants to top out at $84,370 before options. At launch the breakdown includes five engines (three diesels, two petrols) and five trim grades (E-Pace, S, SE, HSE and First Edition), and nearly any combination is possible. On top of that an optional R-Dynamic interior/exterior styling package is available on most permutations, adding yet more depth to the line-up.

Picking a sweet spot in the matrix of models isn’t easy. Jaguar says the $50-$70K bracket is where it will conquest most buyers from other brands, and identifies the D180 SE at $62,430 as its likely volume seller.

Diesel certainly makes sense from a day-to-day drivability perspective. The D180 and D240 offer strong, economical low-end torque that more easily shifts the E-Pace’s heft, and that’s important, because dense is a good descriptor for the E-Pace itself. 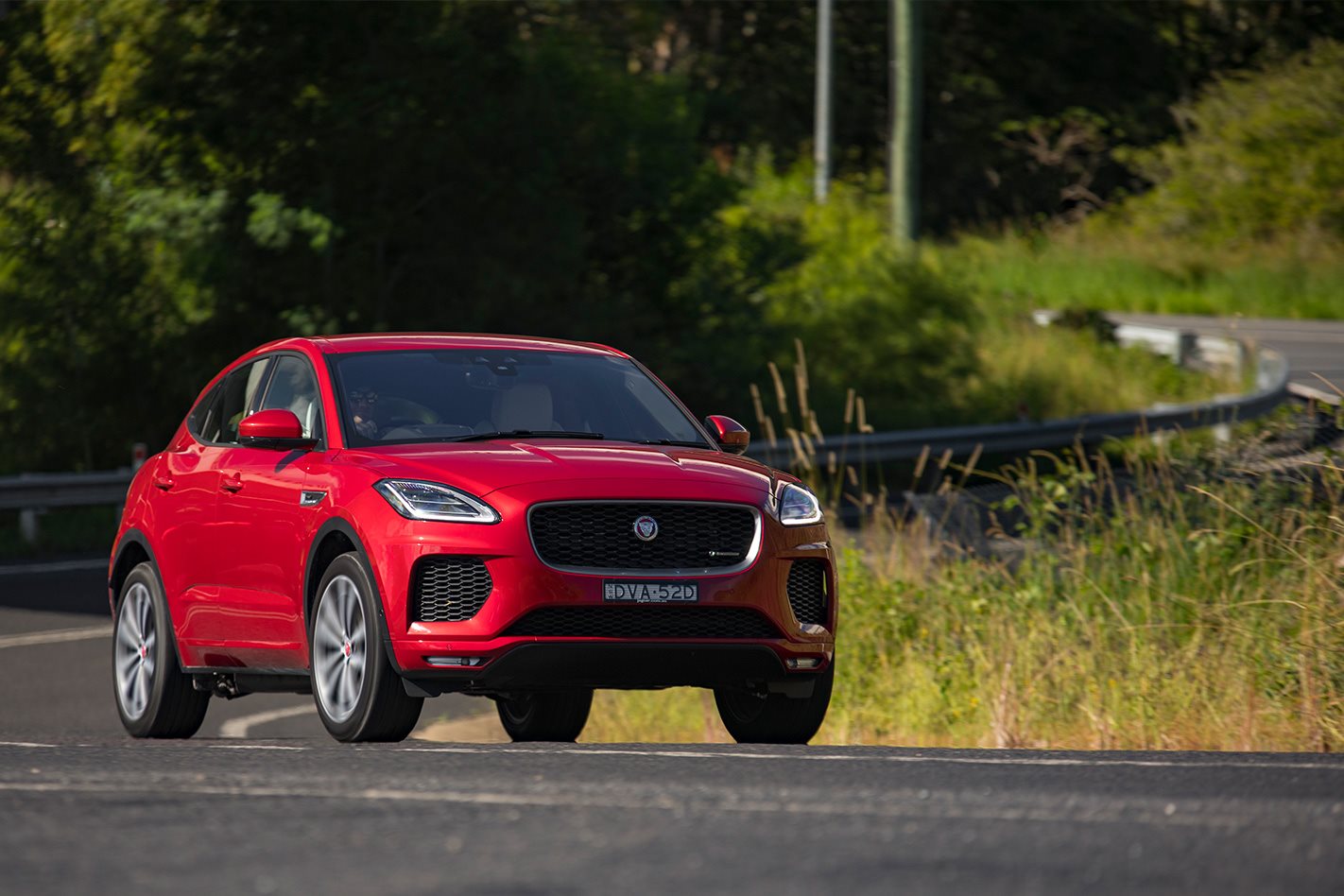 Riding on a revised version of JLR’s D8 platform that underpins the car maker’s smaller offerings including Evoque and Discovery Sport, E-Pace is heavier than its scaled-up bigger brother, the F-Pace that rides on the aluminium-intensive iQ platform.

In its lightest Australian-delivered form in basic trim E-Pace weighs 1832kg (P250), and swells to 1926kg (D240). All-wheel drive hardware lugged by every model takes a toll, though Jaguar says its first application of JLR’s ageing D8 architecture puts a greater focus on dynamics than others, and from the driver’s seat that promise holds water. 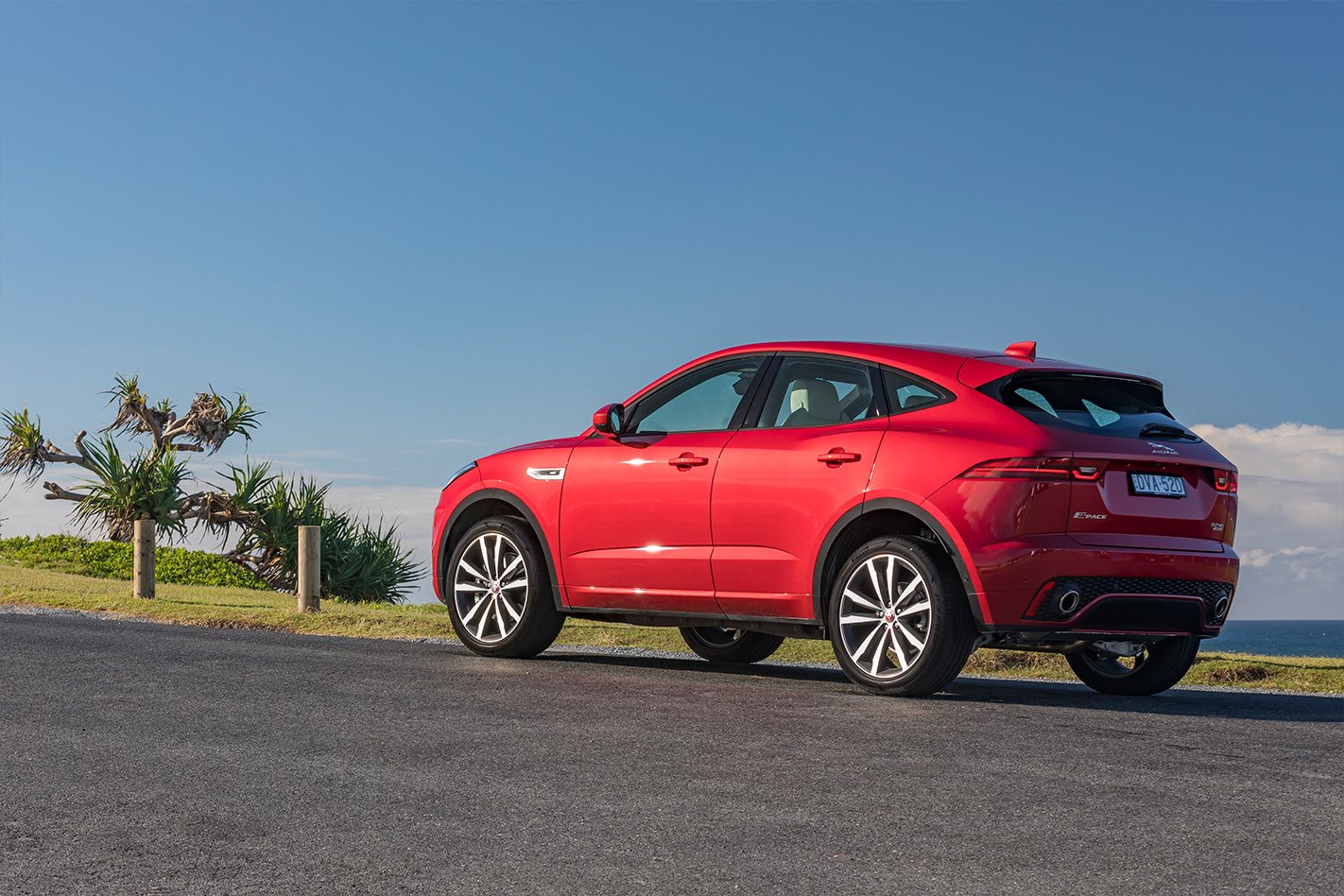 E-Pace should handle like it just crawled from a vat of double cream at Wimbledon, but somehow it doesn’t. Initially its steering is disconcertingly quick for the negotiation of urban environs. Given a few minutes to recalibrate the input of your arms, the front-end’s sharp response starts to gel, particularly when the road opens up.

E-Pace responds enthusiastically to speed. It takes careful management of its weight transfer to extract the sweetness of its dynamics, but factor that in and there’s tasty mid-corner poise and traction for the driver to relish in.

Models without the R-Dynamic pack have no paddle shifters for managing the smooth 9-speed automatic fitted to all E-Paces. Its eco-minded tune favours low rpm upshifts, and combating that means reaching for the trigger lever on the console that takes the place of the rotary dial found in other Jaguars. Sport mode holds gears for longer, but is occasionally slow to kick down. 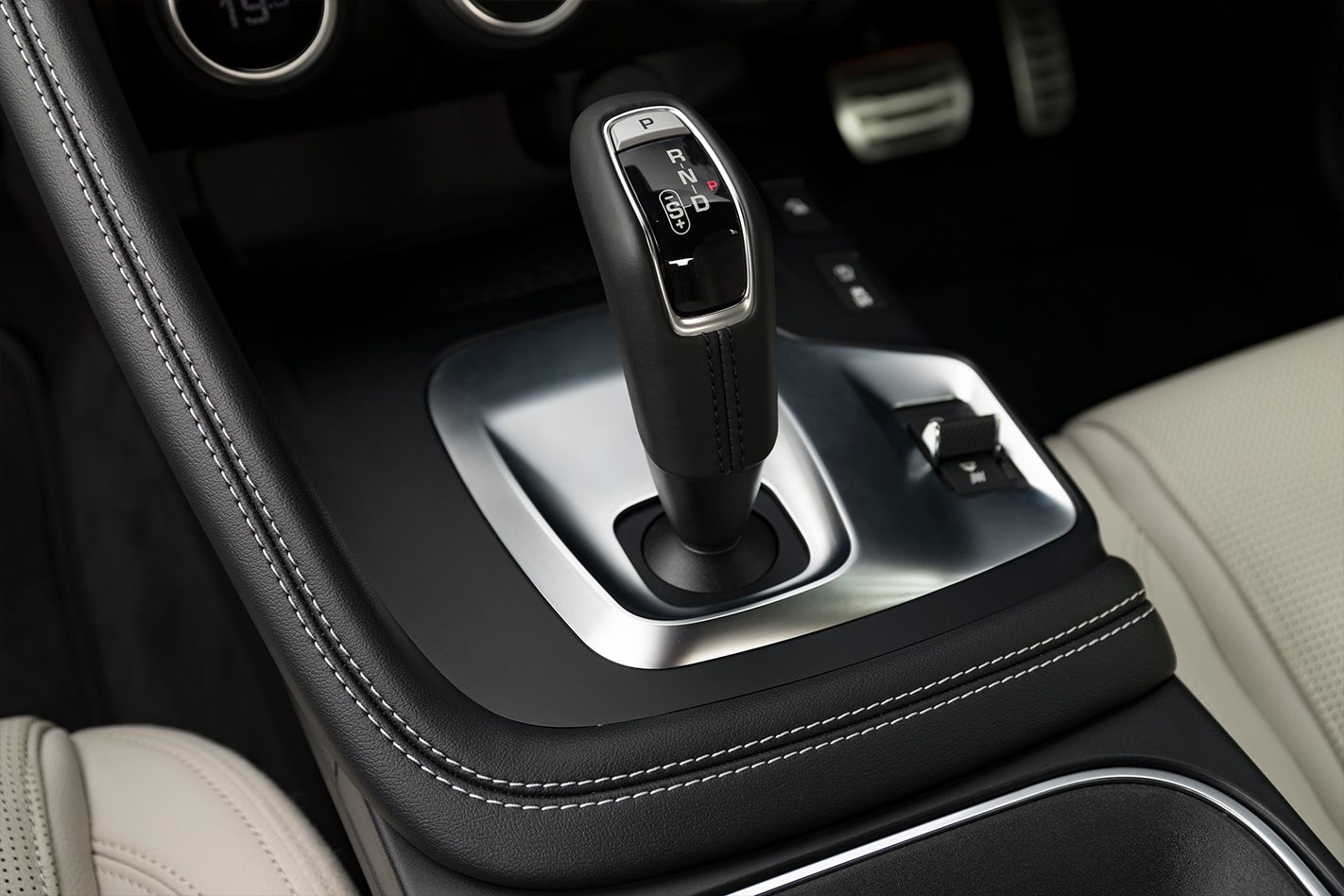 A lack of adaptive dampening (even as an option) means dealing with a firm passive suspension tune that’s springy across rippled surfaces; though not so disagreeable that long distance cruising is a chore. Wheel sizes range from 17- to 20-inches and there’s comfort to be found in a smaller package with bigger tyres that reduce initial impact thuds and thumps, though aesthetics seem to dictate a choice from the larger end of the scale for most.

Striking looks are one of the E-Pace’s assets. Its stumpy proportions precisely ape the trendsetting F-Pace, yet hide a generous rear seat with broad shoulder room and a sizeable cargo area. Its coupe-inspired roofline compromises the hatch opening to a small extent, but doesn’t impinge on rear occupant comfort. Practically, the E-Pace’s clever F-Type-inspired cabin layout and handy storage have family car cred. 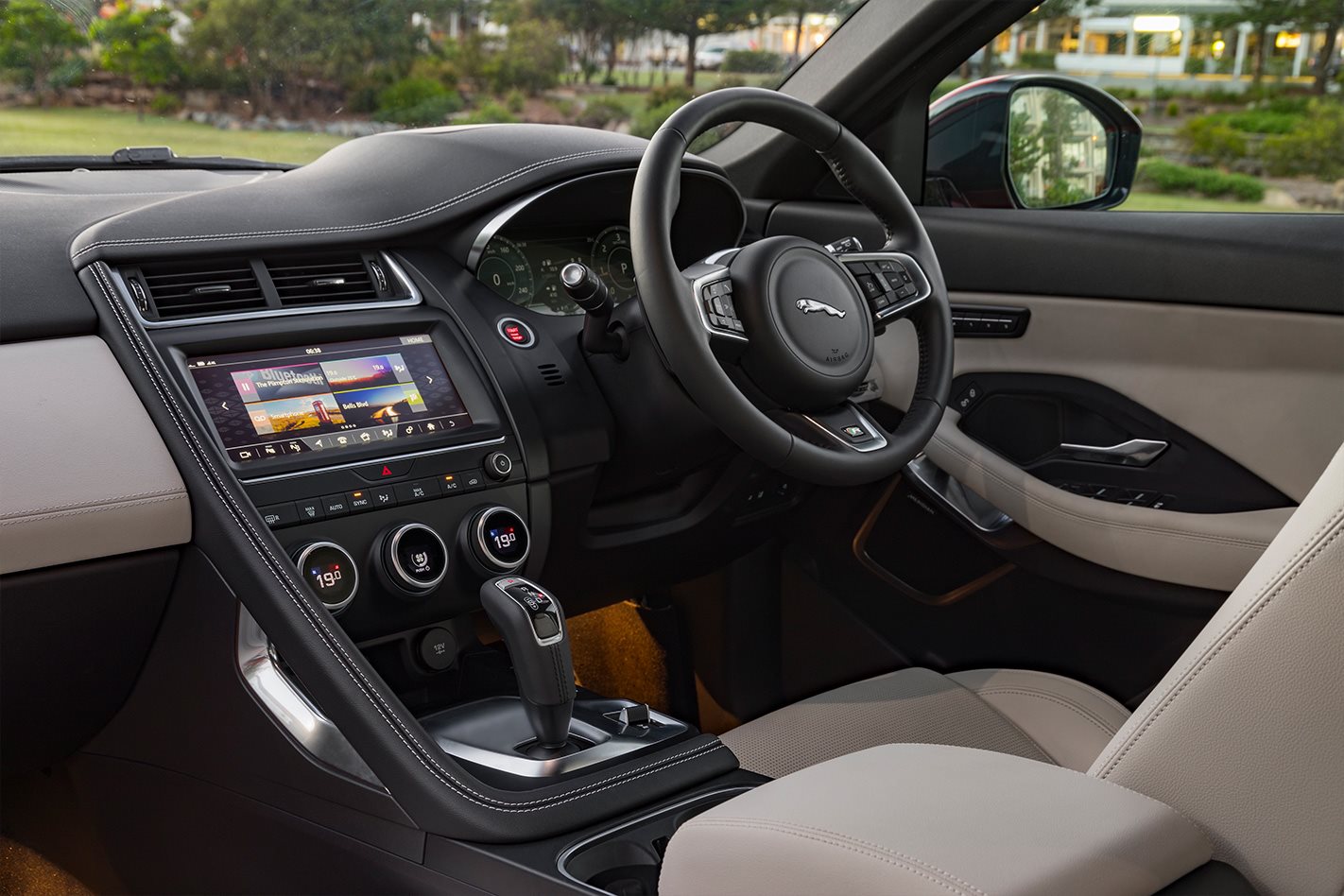 Standard equipment is where the value equation gets shaky. All variants get active safety assists including AEB, automatic LED headlights, a reversing camera and Jaguar’s widescreen TouchPro infotainment system. But it costs more than it should to get things like Apple CarPlay and keyless entry, the latter of which is still a $950 option on the D240 that costs almost $70K. Jaguar says F-Pace buyers spend between 15 and 20 percent of a car’s purchase price on options, and though E-Pace’s positioning is more price sensitive, buyers should be budgeting to do the same to get the full experience.

While bang for buck isn’t an E-Pace strength, it is a uniquely compelling alternative to popular premium offerings from Germany when prudently specified, particularly for those with a penchant for backroad tomfoolery. There are rivals with more performance for the price, but the E-Pace’s high-street flair and customisation should find favour in a market that demands the personal touch. 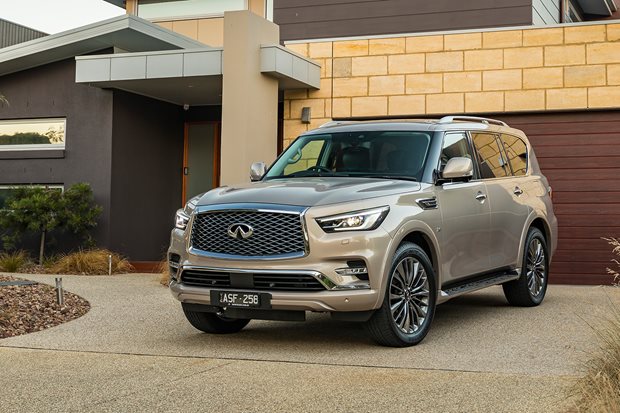 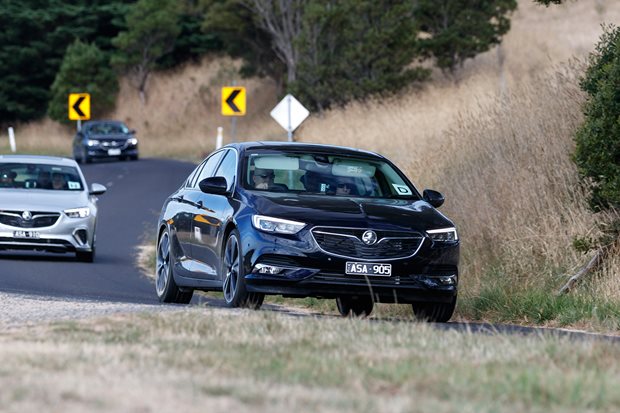