A design-driven compact SUV that’s slightly larger than some segment rivals, and likely to tempt a chunk of Mitsubishi’s showroom traffic away from the ageing (but still strong-selling) ASX.

A design-driven compact SUV that’s slightly larger than some segment rivals, and likely to tempt a chunk of Mitsubishi’s showroom traffic away from the ageing (but still strong-selling) ASX.

The Eclipse Cross debuts Mitsubishi’s new 1.5-litre turbo four, and the company claims its CVT overcomes a number of shortfalls inherent to the design. Plus we never say no to an opportunity to drive on Tasmanian roads. 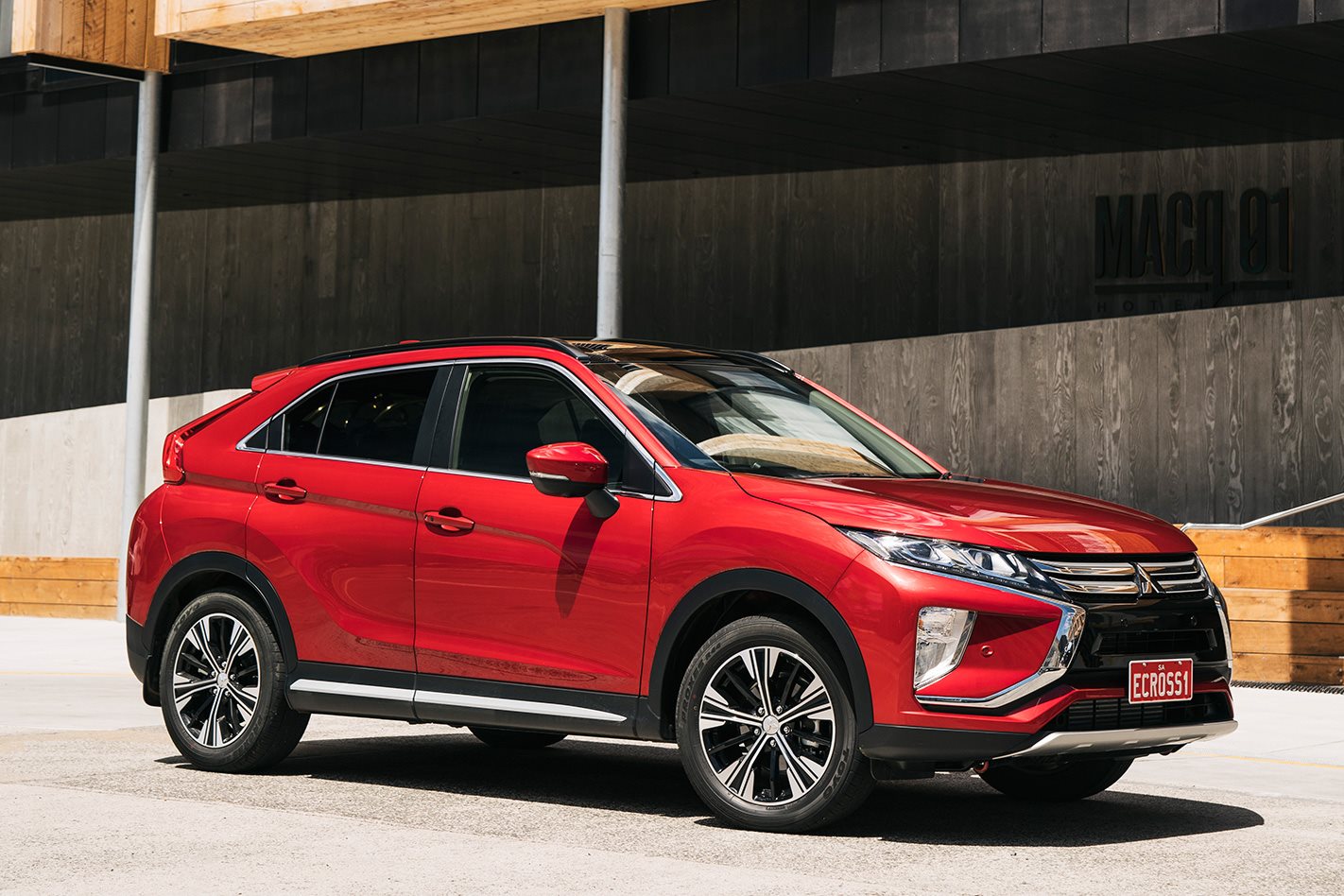 The Mitsubishi Eclipse Cross doesn’t set any high-water marks, but in a segment not exactly bursting with brilliance, it arguably doesn’t need to. The focus on urban driveability, packaging, connectivity and equipment will be ample for it to find an audience. 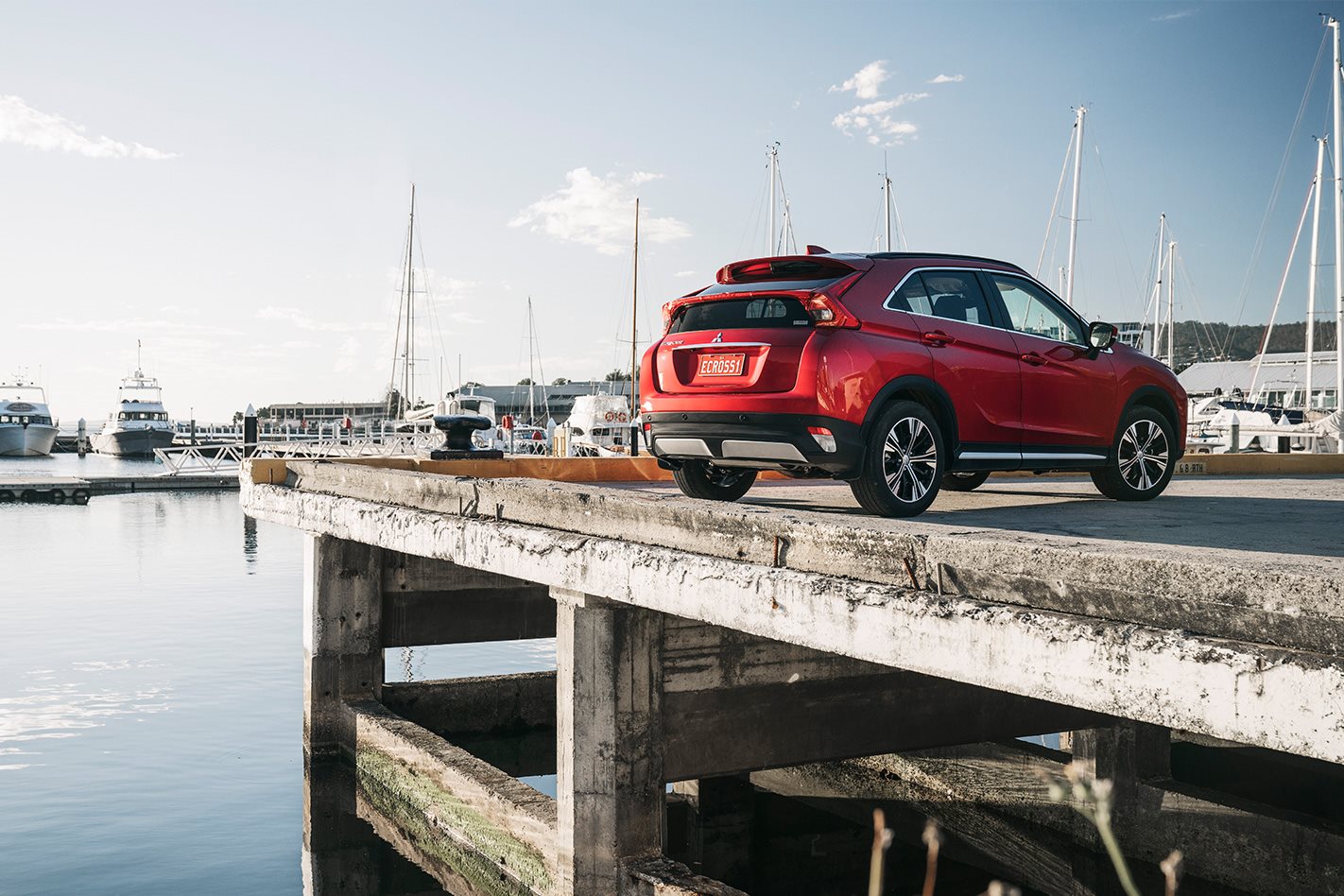 PLUS: Midrange response; safety and equipment; rear-seat flexibility; AWD if you need it

NO ONE ever said mediocrity had to be an impediment to prosperity. Well, at least no one at Mitsubishi ever said it. There’s not a standout performer or Wheels comparo winner in Mitsu’s now-eight-strong model range, yet the company finished 2017 in fifth position on the sales chart, ahead of Ford. The raucous, pensionable ASX compact SUV is regularly the seventh or eighth best-selling passenger vehicle in the country. Clearly buyers in the SUV market have priorities that hinge on attributes not necessarily connected to dynamics, performance or refinement.

All of which bodes well for Mitsu’s latest addition to its SUV line-up. The Eclipse Cross squeezes into the line-up between the ASX and Outlander; a more design-led alternative to the former; more compact and affordable than the latter. It’s no gifted athlete, but it does get enough of the fundamentals right and has sufficient showroom sheen to elevate it above mediocrity. 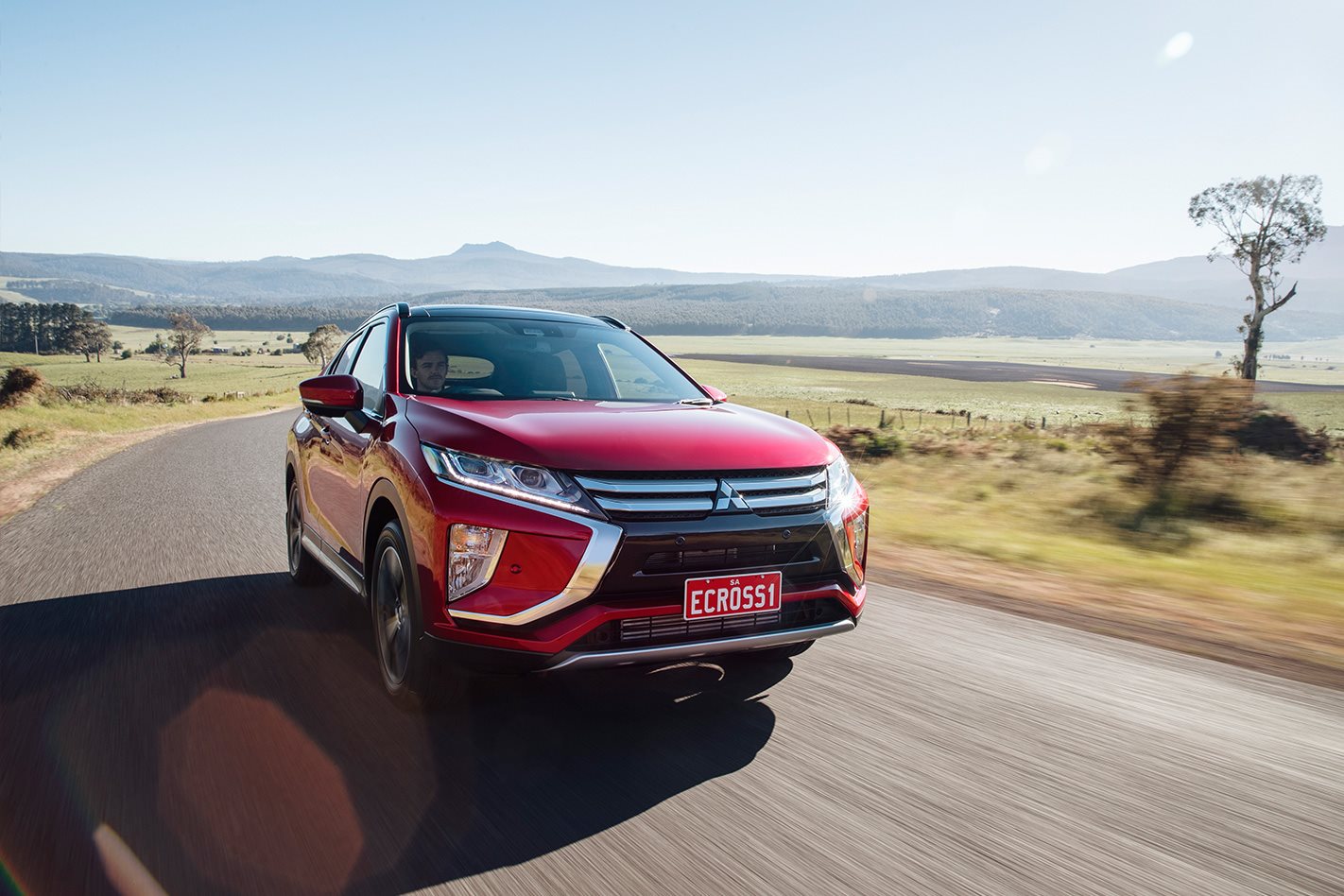 The line-up is contained to just three variants sharing the new 1.5-litre turbo four and CVT with eight ratio steps. The entry point is the front-drive LS, which includes 18s, AEB, lane-departure warning, auto high beam, wipers and headlights, and DAB radio for $30,500. The mid-spec Exceed (also front-drive) adds dual-zone climate, leather, heated and powered front seats, head-up display, LEDs and a safety suite, for $36,000. The range-topping Exceed AWD asks another $2500 over this for the addition of all-wheel drive and a three-mode terrain selector.

The Eclipse Cross lands early scoring shots for design, packaging and presentation. The coupe-esque profile and sloping roofline doesn’t unduly compromise rear headroom, while the rear bench slides fore and aft by 200mm and offers useful backrest rake adjustment. Three mid-teens across the back will just about fit, and three heads back there will distract you from the fact that the rear vision is compromised by the split-glass design of the tailgate. 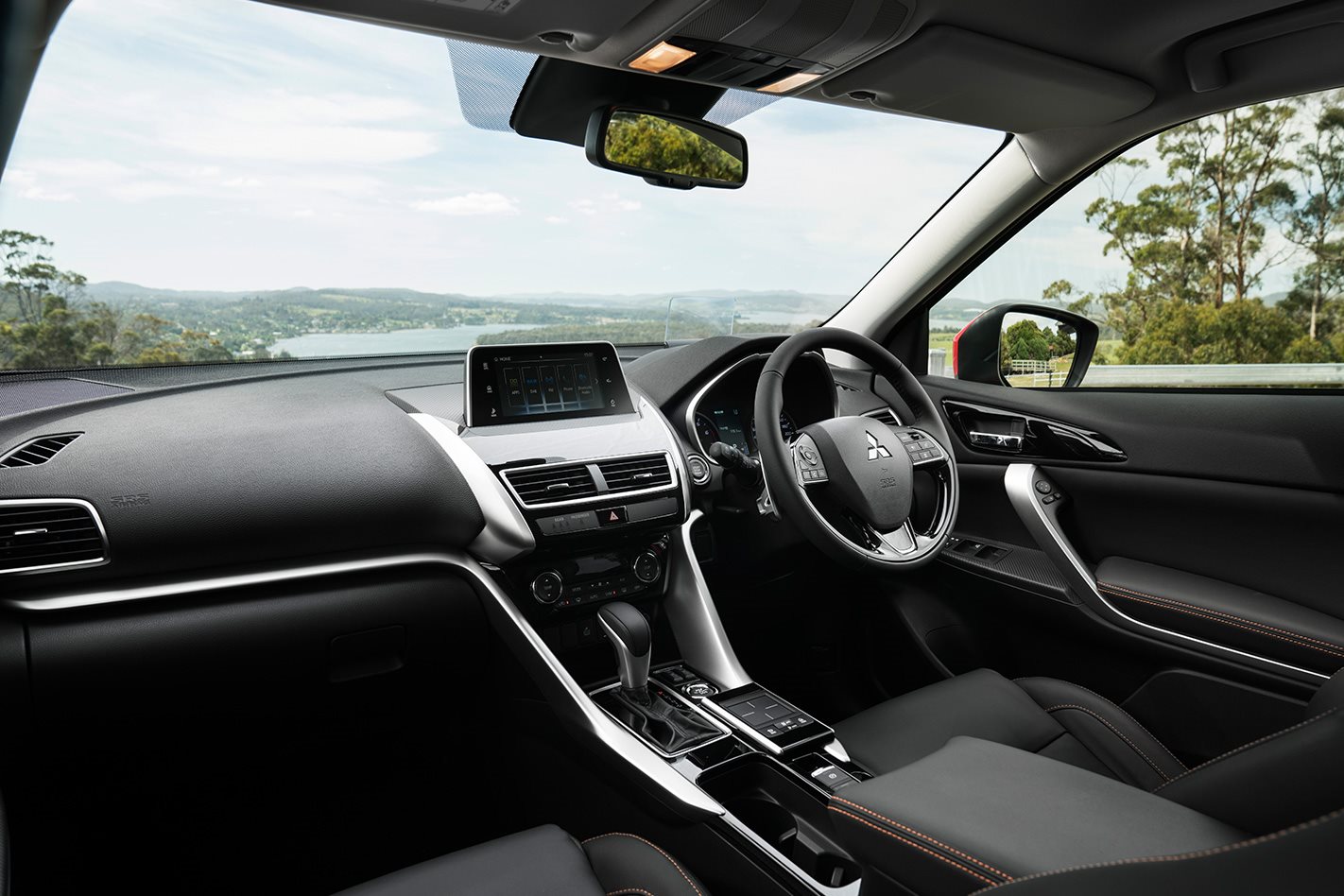 Up front, the seats are supportive, storage is well considered, and the instruments clean and attractive. We’re unconvinced about the trackpad for control of the multimedia and the lack of a volume knob, but the touchscreen compensates, and layout is otherwise mostly logical and intuitive.

More credits quickly amass when sampling the engine for the first time in urban driving. This is Mitsu’s debut installation of the new 1.5 turbo, and it’s a decent little unit. The tune sensibly favours torque, rather than power – Honda’s same-size turbo four in the larger CR-V makes an additional 30kW – but the Mitsu mill boosts up early, delivers a mostly satisfying swell in the midrange, and remains unobtrusive until wrung past 5500rpm. The target market won’t go there, and neither did we, much, as power trails off quickly in the last 500rpm before the 6000rpm redline. 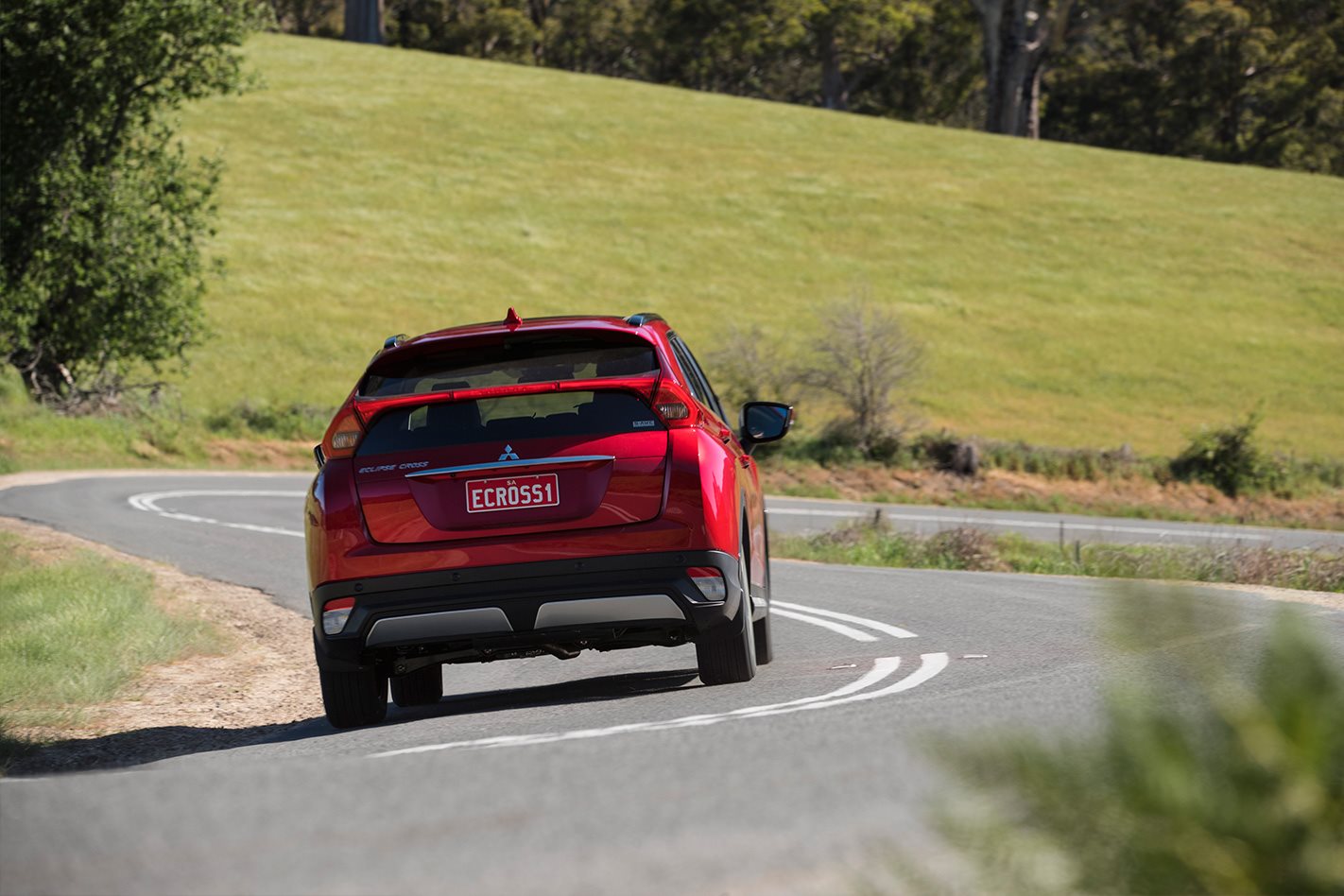 As for the CVT, it’s a little less objectionable than the other hamster-wheels that populate this class. It can’t fully eliminate the slippy, droning syndrome in the upper midrange, but it does at least allow you to take instant control via a pair of paddles fixed to the column, and the eight steps go some way to mimicking a conventional auto in its manual mode. The ratio spread is useful, too, with the tall end dropping revs to 2000rpm at the freeway limit, making for unstressed cruising.

Claimed consumption is 7.3L/100km; we saw an indicated 10.8 over 500km of fairly vigorous driving. Overall, it’s a powertrain that easily has the measure of the atmo offerings in rivals such as the Nissan Qashqai and Honda HR-V. 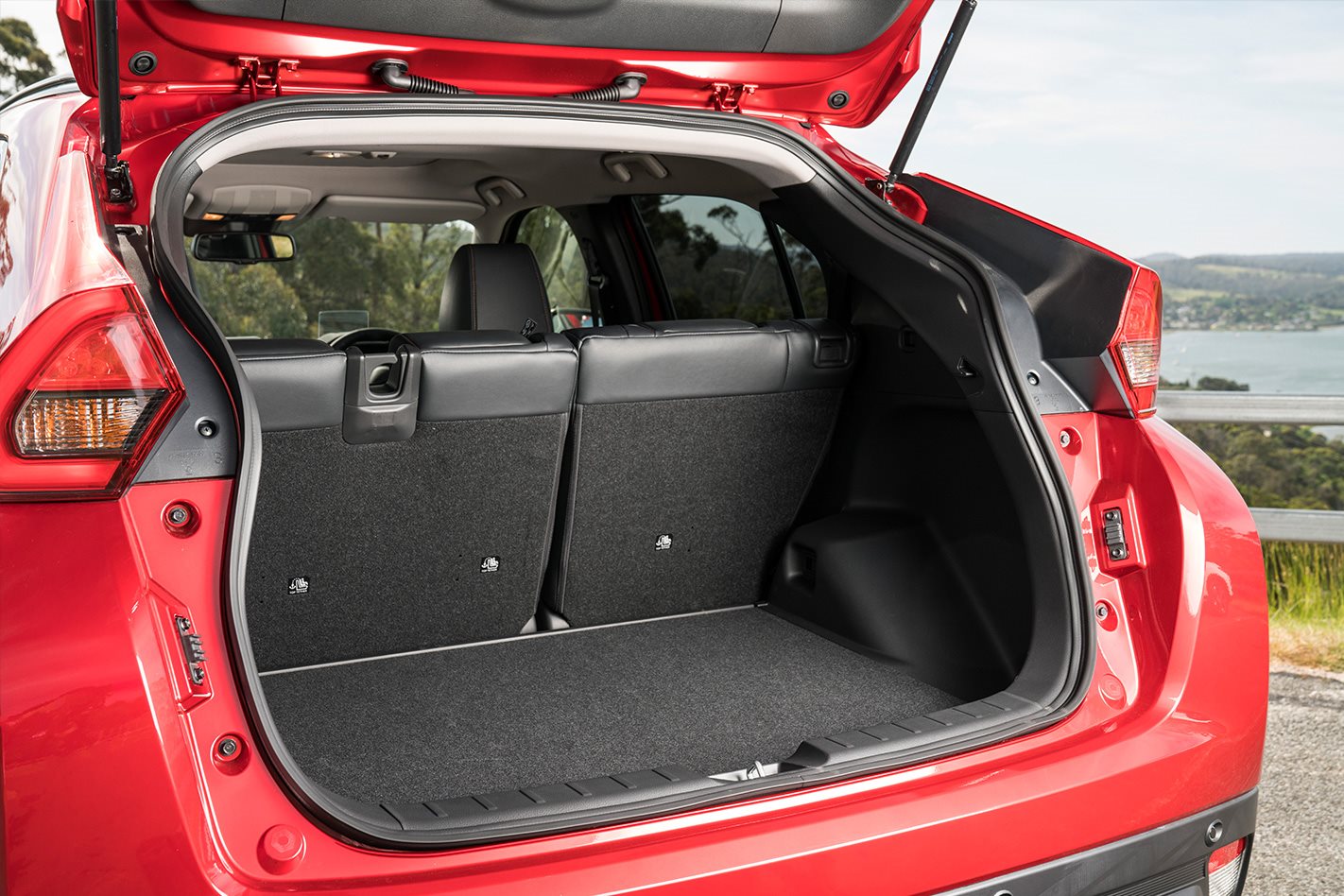 Dynamics are less of a clear-cut thumbs-up. The steering has an on-centre softness and vacancy clearly aimed at drivers who want their SUV to feel slightly inert and sneeze-proof at the straight-ahead; the result is a fairly lifeless wheel that needs a crank of lock before providing a sufficient sense of connection. On dirt, though, there’s an arcade-game level of detachment plus rack rattle. The chassis tune favours urban ride comfort, which is welcome, but the downside is significant roll into roundabouts, and high-speed damping that can become flustered and unsettled in spirited backroad hustling.

But will anyone know … or care? Of course not. The equipment level, even at the LS entry point, is high, the safety story strong in Exceed, the connectivity boxes ticked. Teamed with the rakish, slightly blinged-‘n’-creased styling, requisite elevated driving position and the option of all-wheel drive for a reasonable premium, and it’s quickly evident there’s nothing mediocre or ill-considered about Mitsu’s business plan. 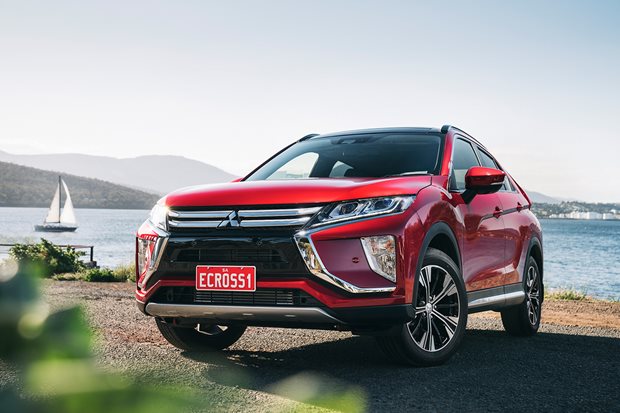 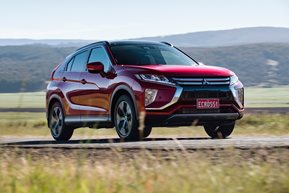