Mazda’s fifth new-generation ‘SkyActiv’ model – the pint-sized CX-3 SUV – prepares to shake up its class with a vast model range that kicks off at just $19,990

Mazda’s fifth new-generation ‘SkyActiv’ model – the pint-sized CX-3 SUV – prepares to shake up its class with a vast model range that kicks off at just $19,990

WHAT IS IT?
Sportily low and strikingly styled, the CX-3 shares DNA with both the Mazda 2 and Mazda 3, and has an identical wheelbase to the smaller 2. Intended as a lifestyle vehicle for couples, in contrast to the breeder-oriented CX-5, the CX-3 offers front- and all-wheel drive, petrol and turbo-diesel engines, and an excellent manual transmission, as well as an automatic.

WHY WE’RE TESTING IT
After driving pre-production versions of the CX-3 at Victoria’s Anglesea Proving Ground last December, Mazda has now officially launched the car in Australia, following its debut in Japan last month. In showrooms from this Saturday will be CX-3 Maxx, s-Touring and Akari variants, spanning $22,390 to $37,690. The entry-level CX-3 Neo ($19,990-$23,020) goes into production next month, and will arrive here in May.

THE WHEELS VERDICT
Punters will love the way the CX-3 looks, and they’ll be smitten with its characterful interior and winning price. The all-wheel-drive versions are keen handlers and are more sweetly balanced than the less impressive front-drive CX-3s, which don’t quite hit the mark, especially the diesel. While CX-3 can’t challenge its roomiest competitors for rear-seat or boot space, it has a broad-ranging appeal that should see Mazda Australia fighting to import every one it can get.

THE WHEELS REVIEW
PLEASE don’t bag out the small SUV. After all, it doesn’t matter how much we whinge about the inherent compromises of becoming taller, heavier, and less impressive, people will keep buying them by the container load. So if you’re going to have an SUV, may as well make it a small one. Other drivers might hate you less.

We covered the CX-3’s DNA extensively last December, but here’s a quick recap. Essentially it’s a Mazda 2, riding on the same 2570mm wheelbase, but sporting a 215mm-longer body that delivers slightly more rear leg- and knee-room, and a larger 264-litre boot. CX-3’s petrol engine – a 109kW/192Nm 2.0-litre ‘SkyActiv-G’ four – is the same as that used by the base Mazda 3, including six-speed manual and six-speed automatic transmissions, though the CX-3’s 1.5-litre ‘SkyActiv-D’ turbo-diesel four is a newcomer to Australia.

Available in either front-drive Maxx or AWD sTouring and Akari variants, solely with an automatic transmission, the 77kW/270Nm turbo-diesel won’t attract performance enthusiasts. But its 4.8L/100km combined fuel number puts it right at the top of the baby SUV class (5.1 for the AWD). The petrol is impressively frugal too, spanning 6.1L/100km (FWD auto), 6.3L/100km (FWD manual) and 6.7L/100km (AWD auto).

Kicking off at $26,790 for the six-speed auto Maxx, the turbo-diesel CX-3 is a well-mannered little thing. You can tell it’s a diesel at slow speeds but it’s far from a rattler, and skipping along at three-figure velocities, you’d honestly never know. With plenty of torque – 270Nm from 1600-2500rpm – the diesel is incredibly tractable and devours undulating terrain with effortless composure, yet there’s something deceptive about its performance. Changing up well below the 5000rpm redline, the diesel demonstrates the beauty of long and strong legs, even though perceived acceleration is leisurely.

The diesel doesn’t respond too promptly to a wide-open throttle at standstill – gathering its thoughts before punching off the mark – but it’s the front-drive diesel’s damping that raises an eyebrow or two. While the Maxx’s ride on 215/60R16 Bridgestone Turanzas is quieter than expected, it feels underdamped at the front, as if the diesel’s 36kg weight gain over the petrol and the CX-3’s long nose somehow expose a lack of damping resistance. It nods over undulations more than it should, and it lacks front-end point in corners.

Riding on 215/50R18 Toyo Proxes rubber, the front-drive CX-3 s-Touring petrol manual ($26,990) feels noticeably more dynamic. Its sportier tyres produce a little more noise, but they also introduce a keener feel, as if the petrol front-driver has a sportier suspension tune. It doesn’t, but the perception is definitely there.

What the FWD petrol on 18s shares with the diesel on 16s is a slight discrepancy in steering response. It feels a little disconnected with a quarter-turn of lock on, and slightly viscous too, as if consistency in weighting and steering response haven’t quite been finessed. The front-drive CX-3’s steering is certainly not as crisp and natural as it could be.

But the petrol does have one game-winning ace up its sleeve besides more performance – the choice of a manual transmission. Mazda’s SkyActiv-MT six-speeder is a bloody ripper, with fabulous precision and a beautifully oiled weightiness that makes it feel like it’s come from a sports car (like, say, the new MX-5…). Combine that with the 2.0-litre petrol’s lively enthusiasm and the CX-3’s superb three-spoke leather steering wheel (on Maxx, s-Touring and Akari) and here’s a baby SUV with real panache.

Thing is, you can’t get a manual CX-3 with all-wheel drive, and that’s a massive shame because the AWD version has easily the best chassis. In top-spec Akari guise with the 2.0-litre petrol ($35,290), the CX-3 AWD is a seriously luxe little tinker, complete with a sunroof, proper leather (not the s-Touring’s shameful ‘Maztek’ vinyl), and just about every safety bleeper known to man. But it’s the AWD chassis that sets it apart.

Meatier, more consistent steering, real chassis poise and an involving feel as the AWD’s semi-independent de Dion back end drives the nose into bends, the flagship CX-3 Akari disproves the notion that base is best. At this level, the swish CX-3 pretty much transcends the class divide, and would look just as at home in Double Bay as it would in Doonside. About the only thing tarnishing the illusion is the engine’s strident induction note, and the vibes you feel through the pedals and steering wheel, above 6000rpm. It’s super-keen, but could shut its trap a bit more.

So, despite moments of brilliance, the CX-3 range is ultimately a little patchy. Its packaging, driving position and theatre-style rear seating might be spot on, but you just wish it offered a broader range of seat adjustment – when will the Asian car makers learn? – and greater over-the-shoulder vision. The refined and relaxing diesel is an efficiency wizard, yet it ultimately lacks herbs, while the feisty petrol has superb transmissions and genuine spirit, if not quietness. Driving enthusiasts will be drawn to the excellent AWD version, yet you can’t pair easily the best chassis with Mazda’s wonderful manual transmission!

There’s no doubt the CX-3’s pricing and equipment are A-grade. Cue the $22K Maxx’s standard sat-nav, rear-view camera and parking sensors, 7.0-inch colour touchscreen, leather steering wheel, cruise control, telescopic steering, Bluetooth, the list goes on. And there’s no doubt the CX-3 deserves to sell like crazy. But there’s some finessing to be done here, and only careful selection from Mazda’s vast CX-3 range will deliver a sweet spot.

Click here to read the full range review of the Mazda CX-3. 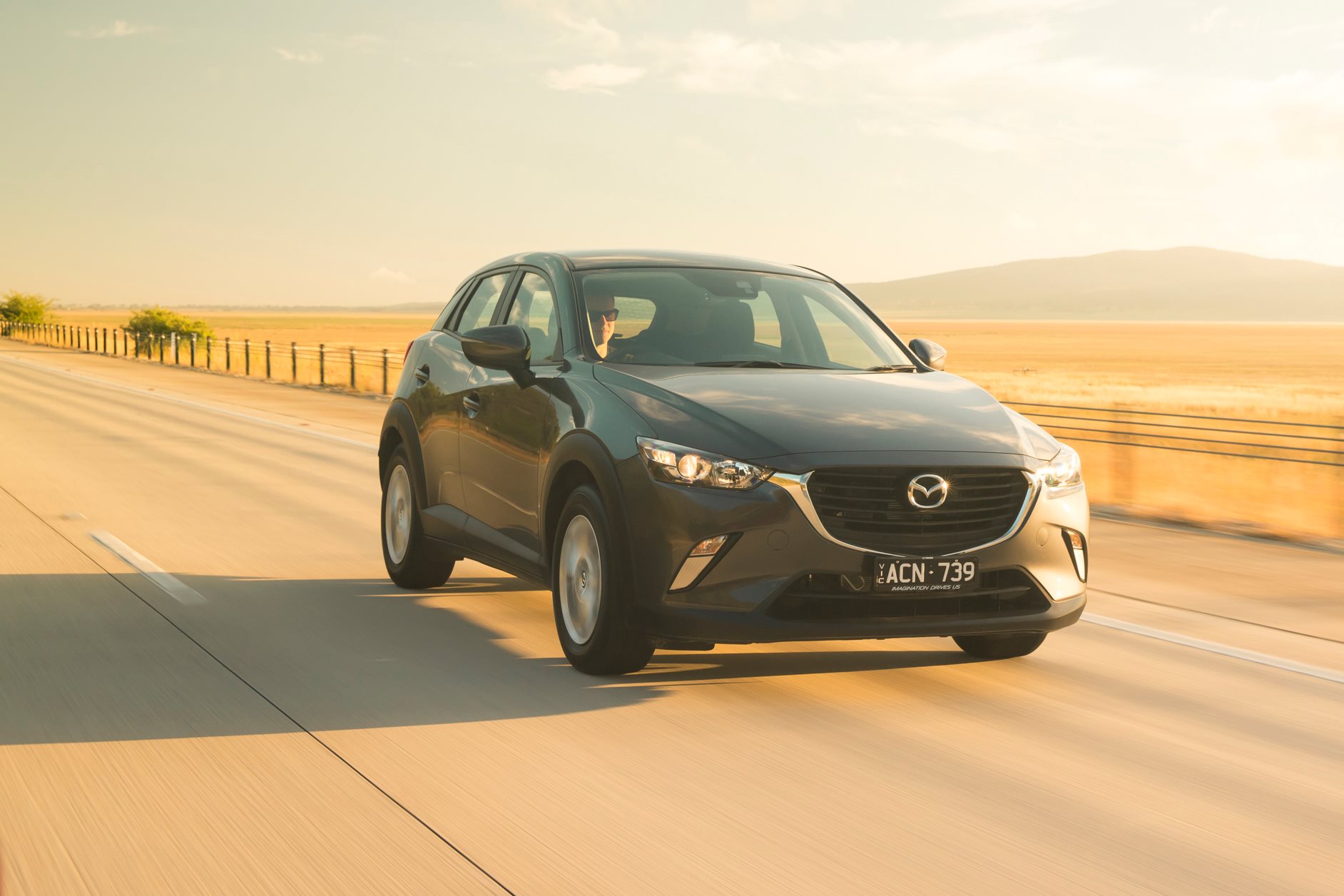 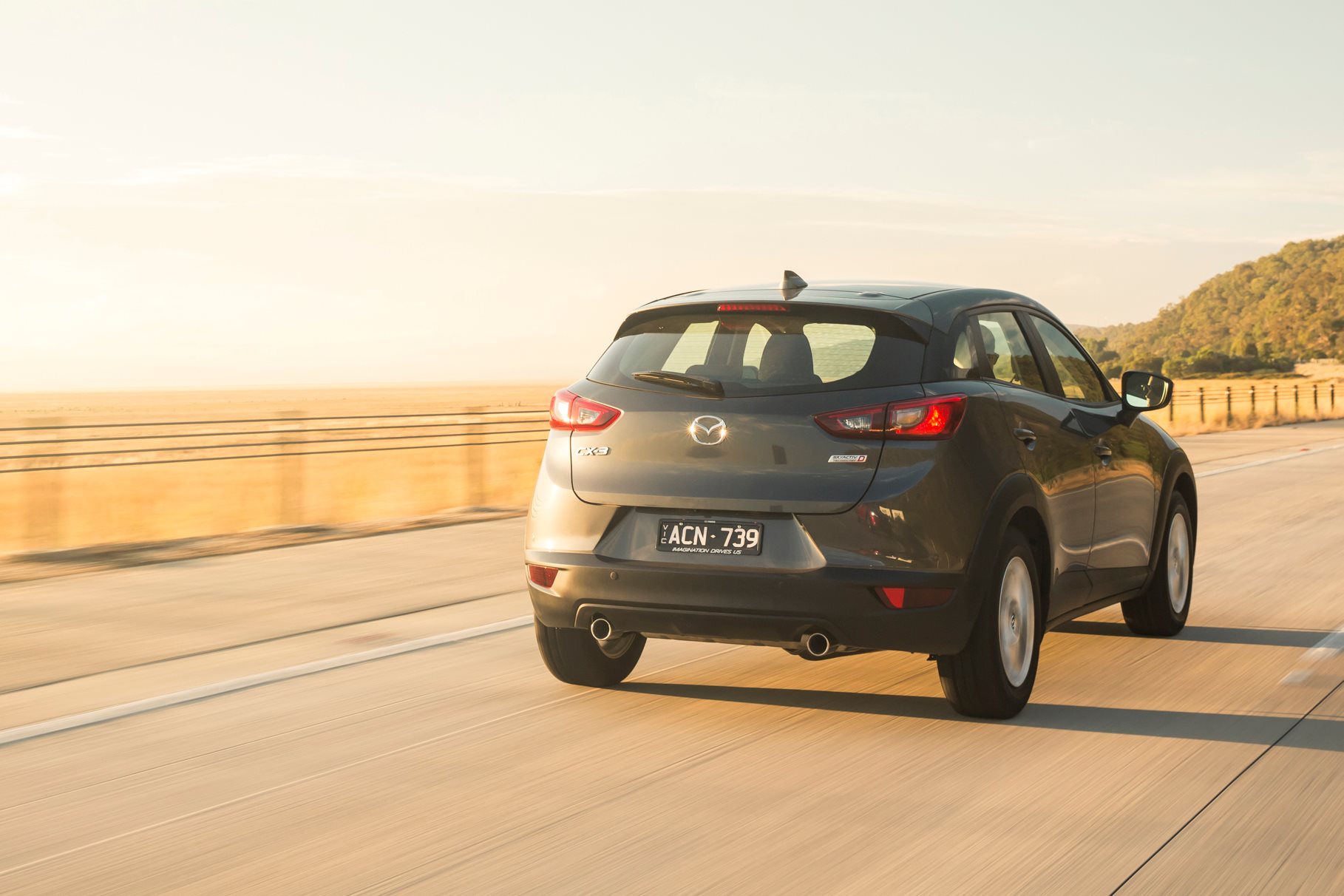 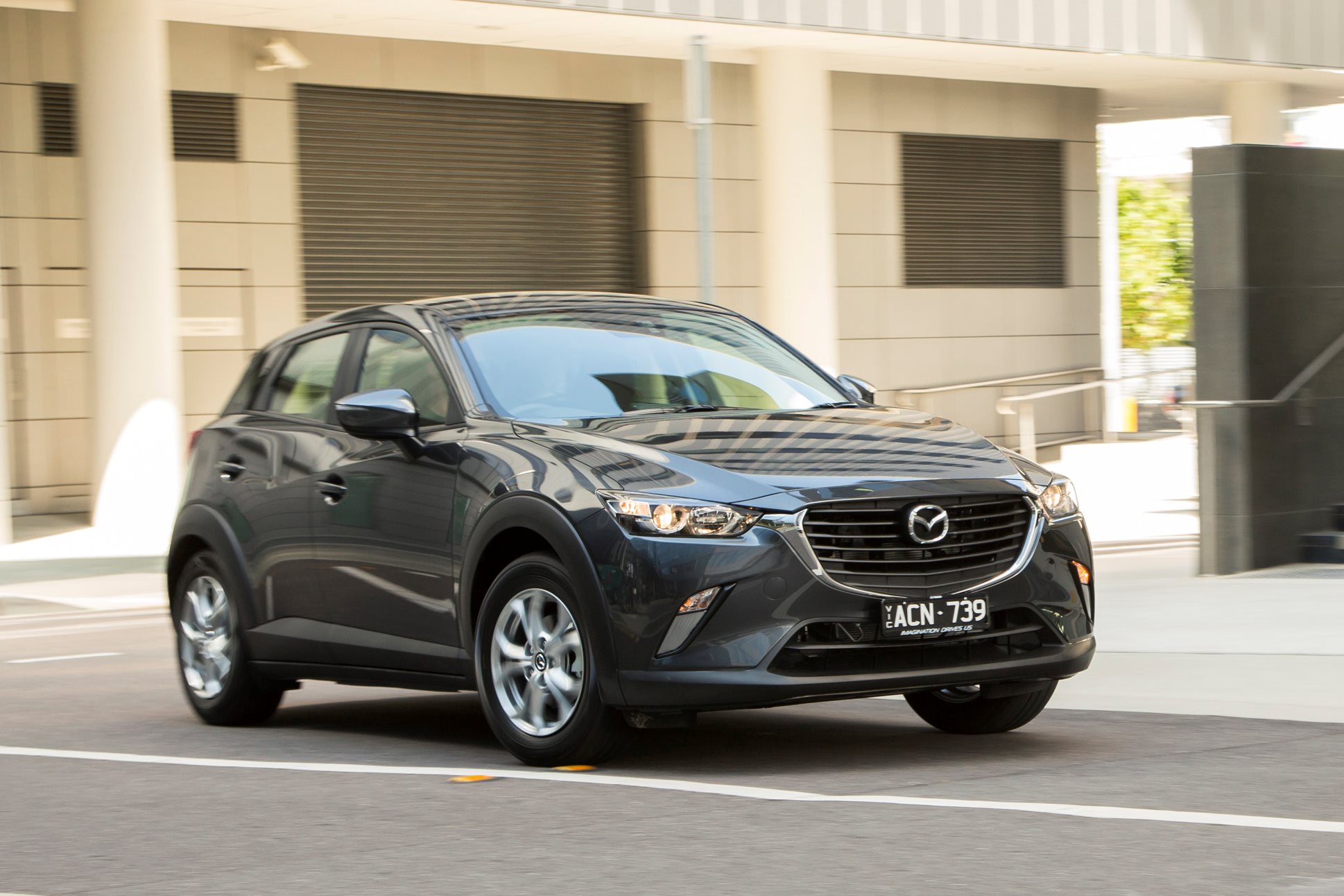 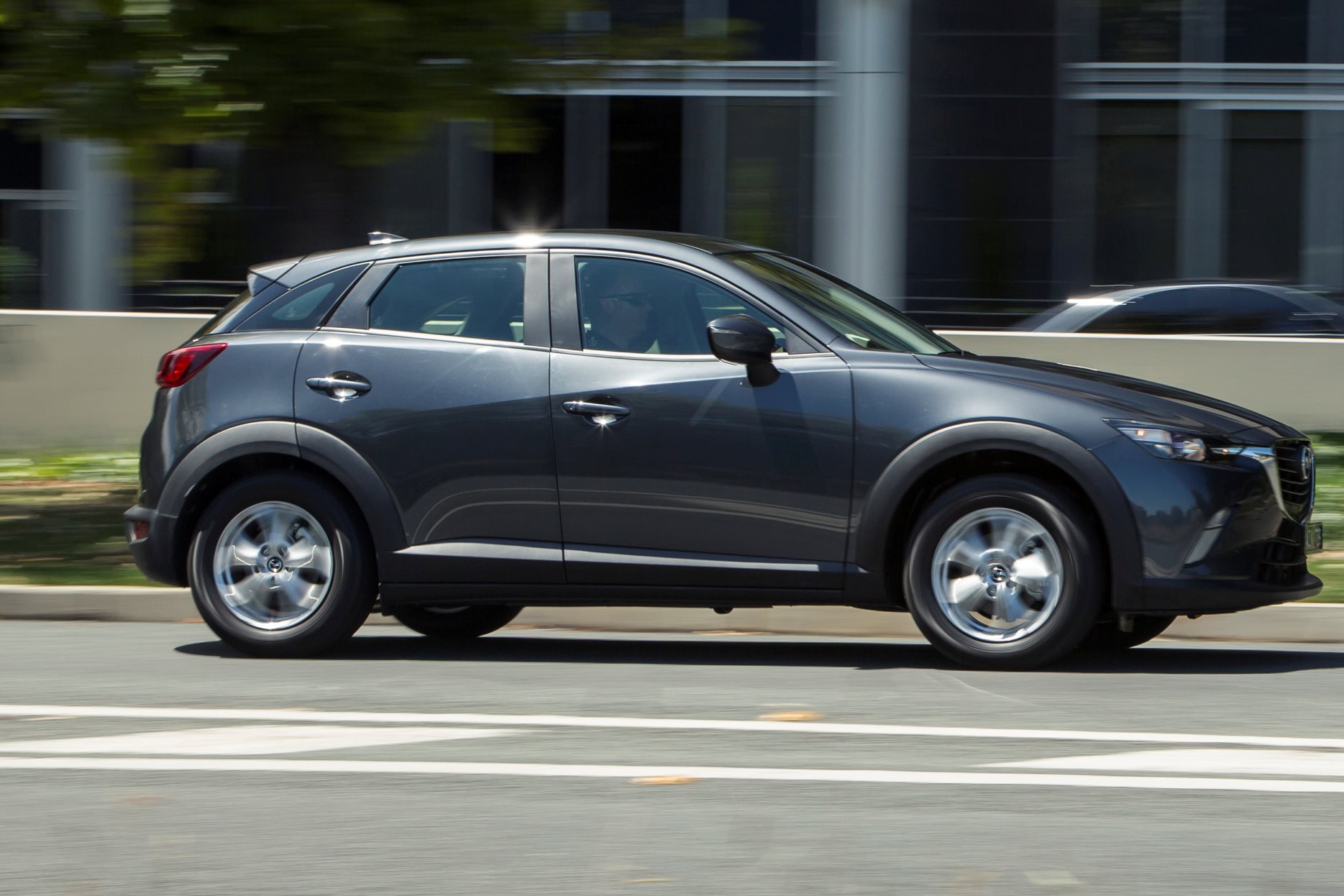 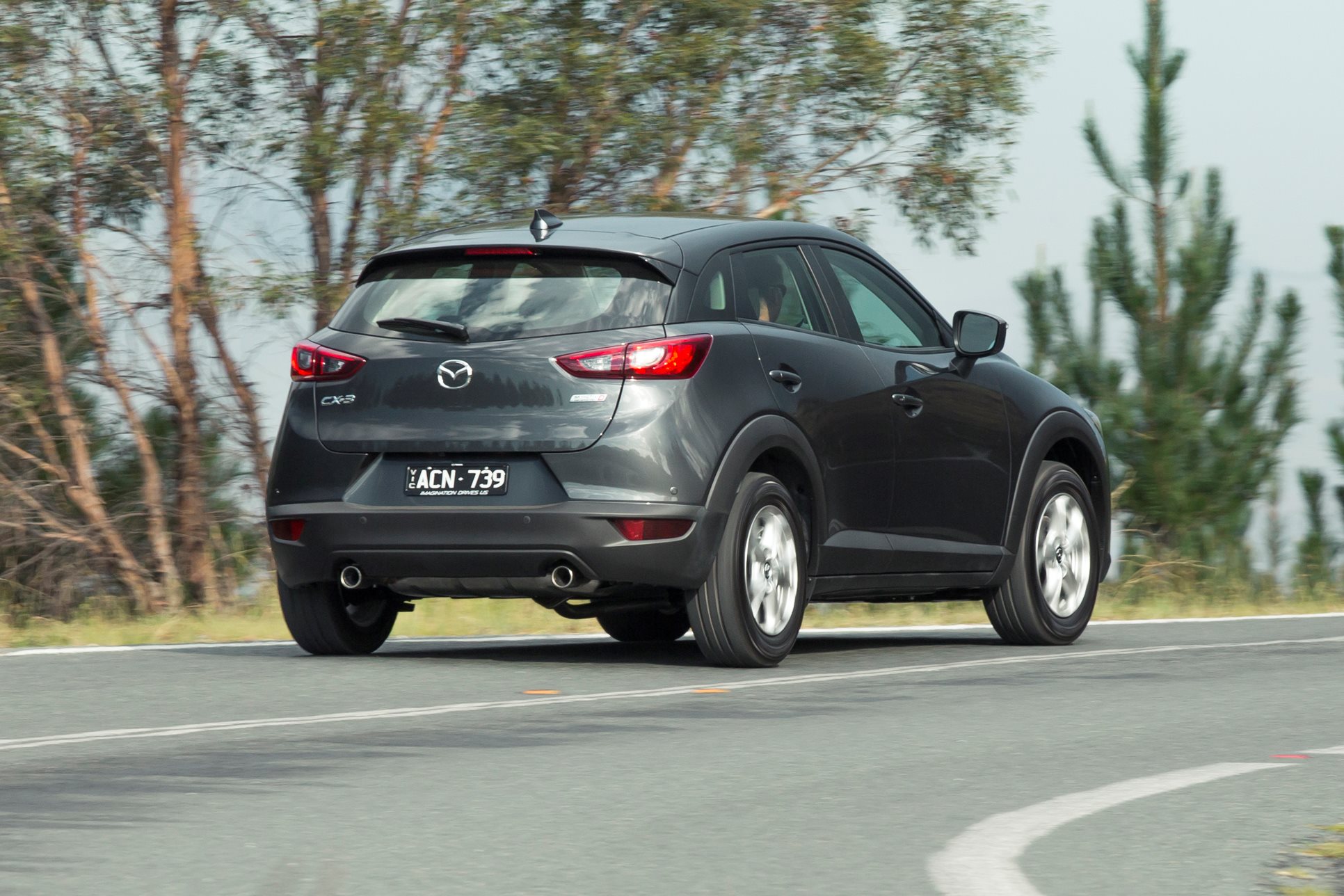 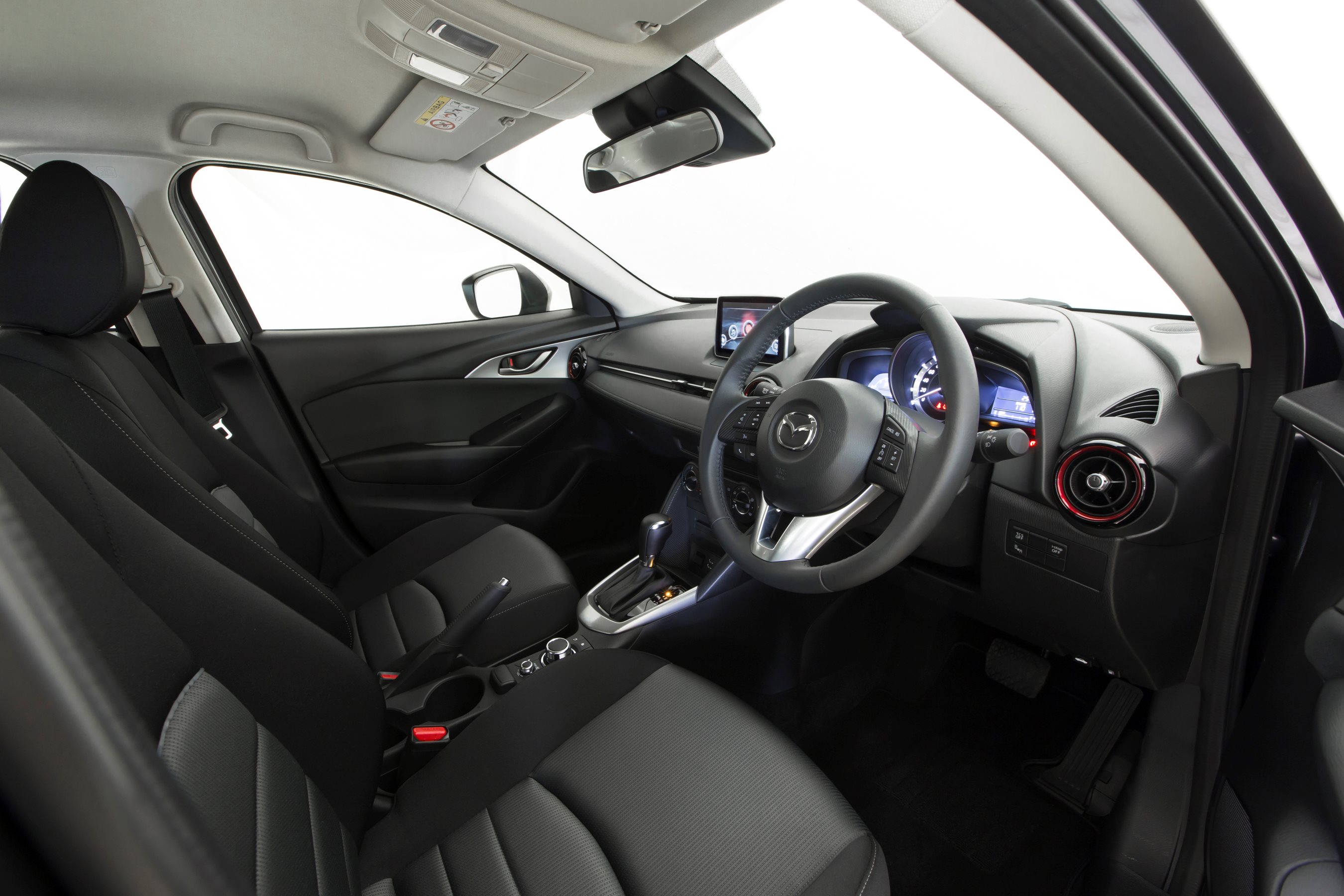 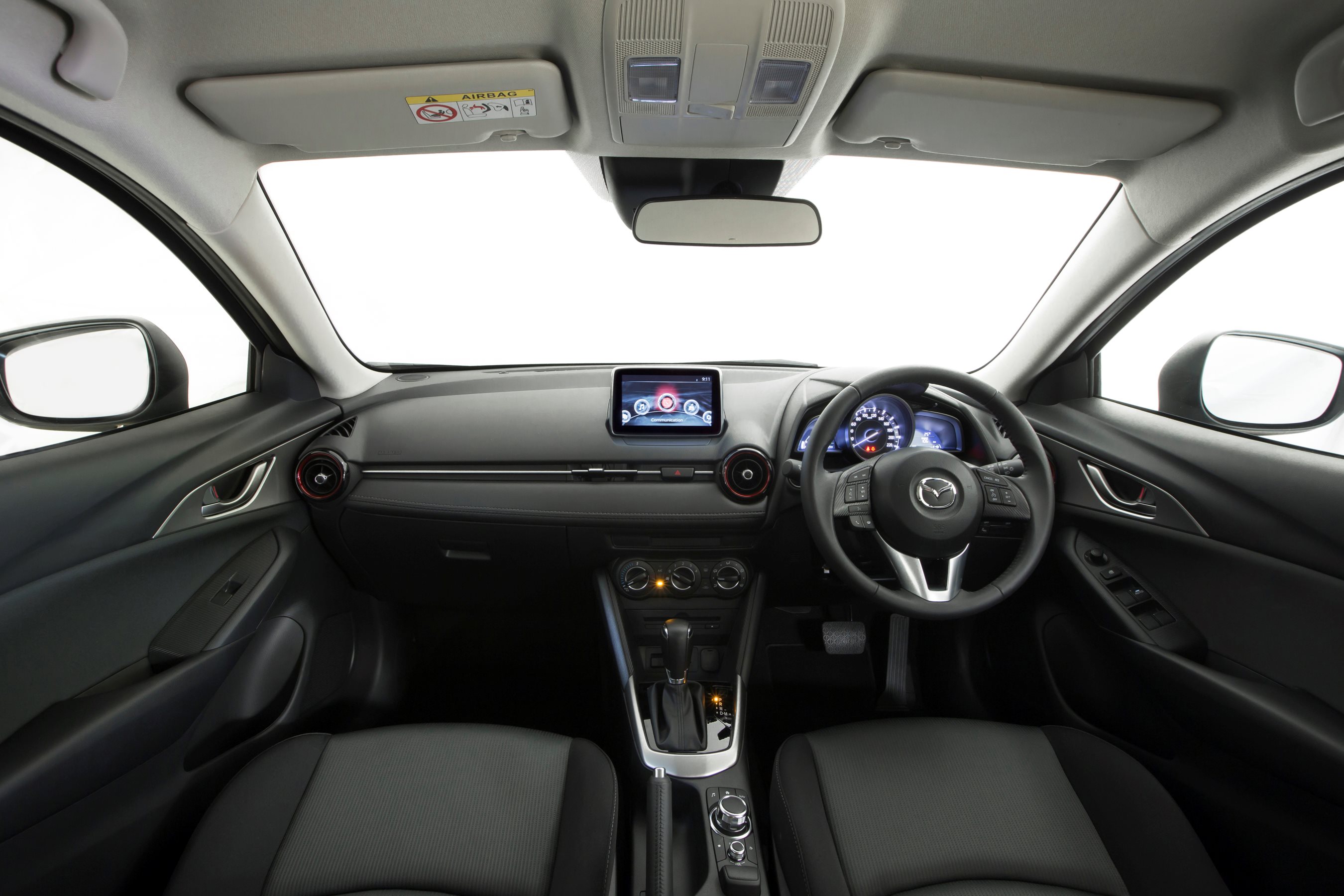 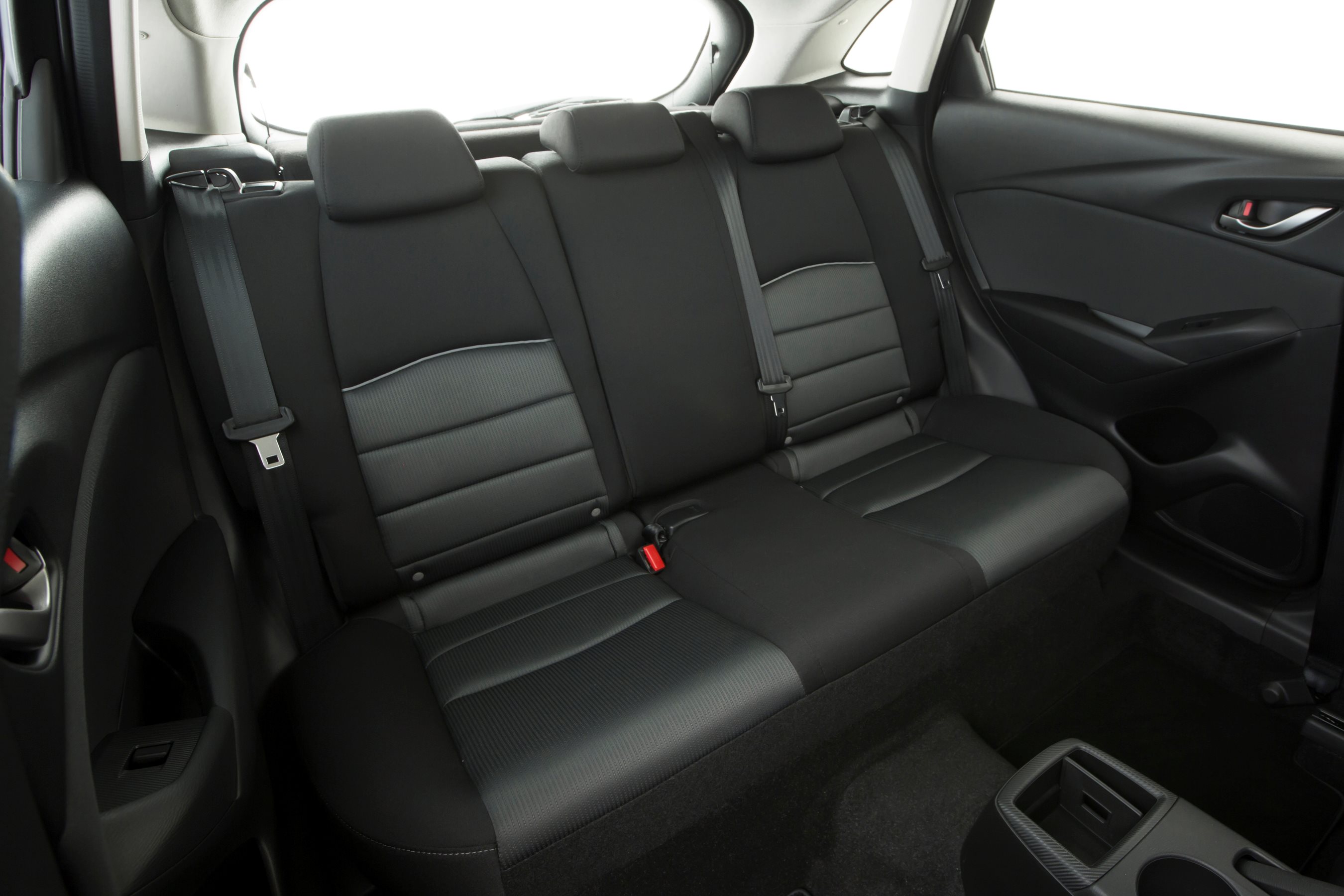 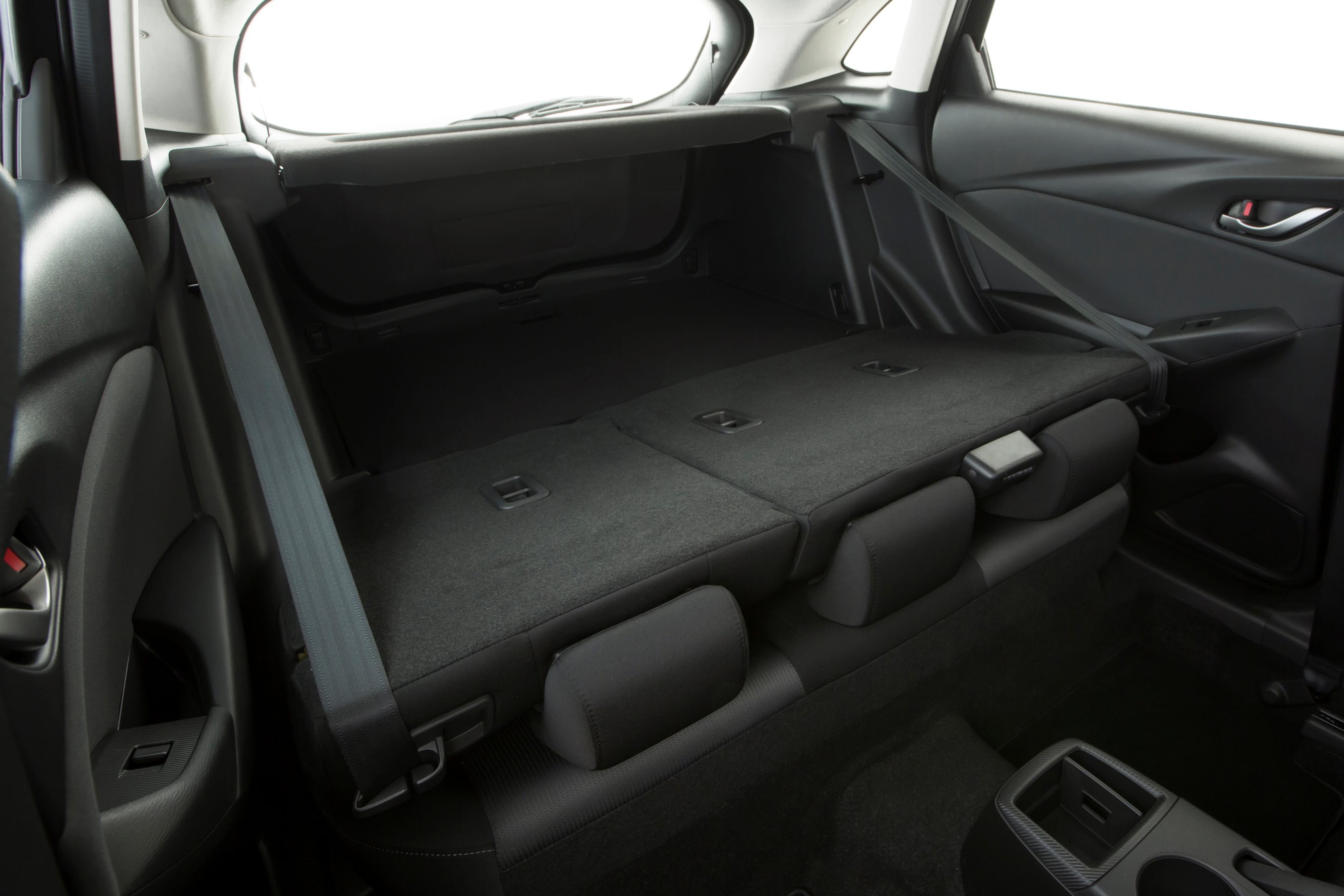 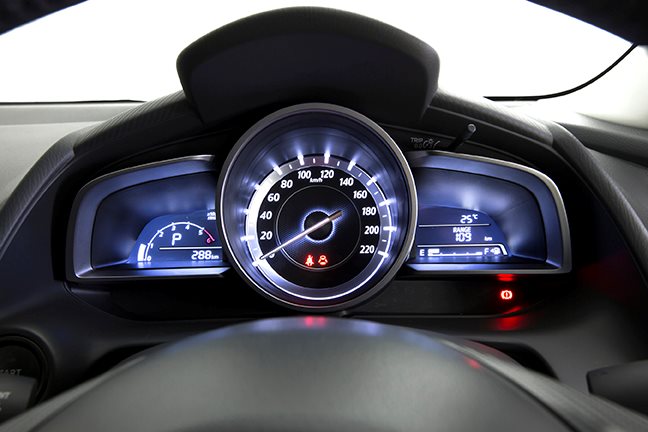 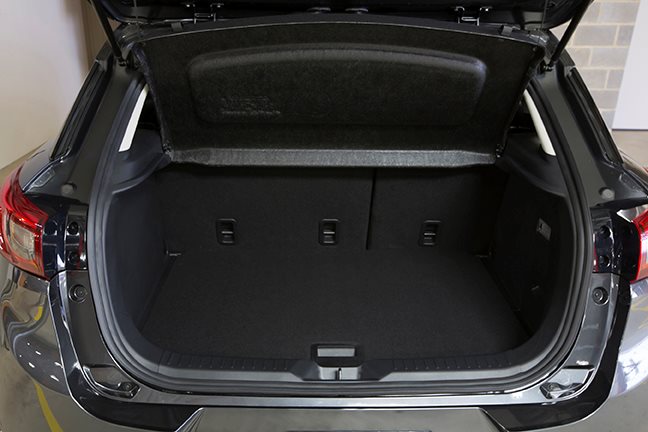