CLEVER driver-assist technology comes to the Nissan Patrol including a rear-vision mirror that can see through rear-seat passengers. 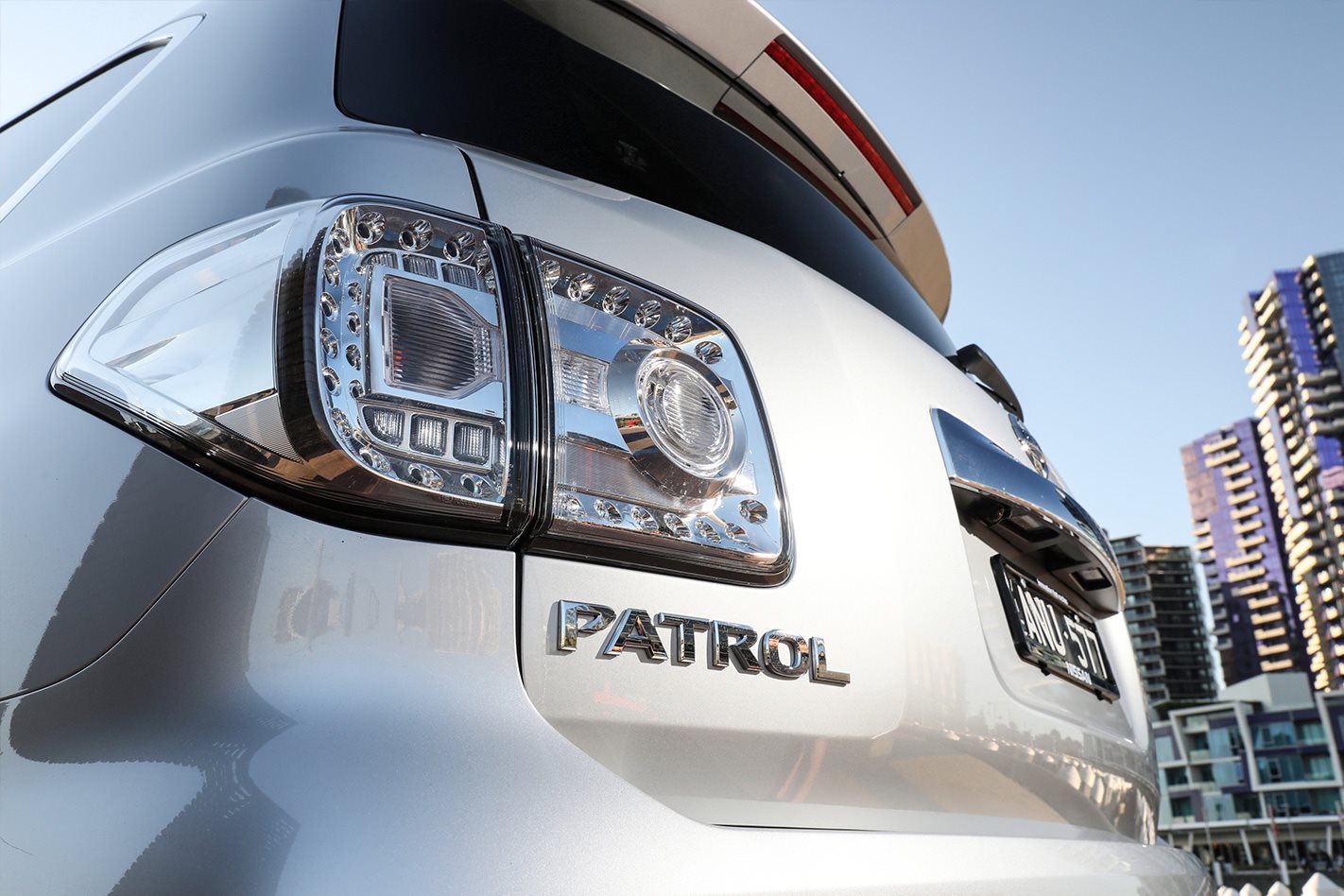 Late last year it had an update that introduced a range of driver assist technologies. One is a rear-vision mirror that can see past the rear seats even if they’re occupied to let a driver know what’s behind the big off-roader. 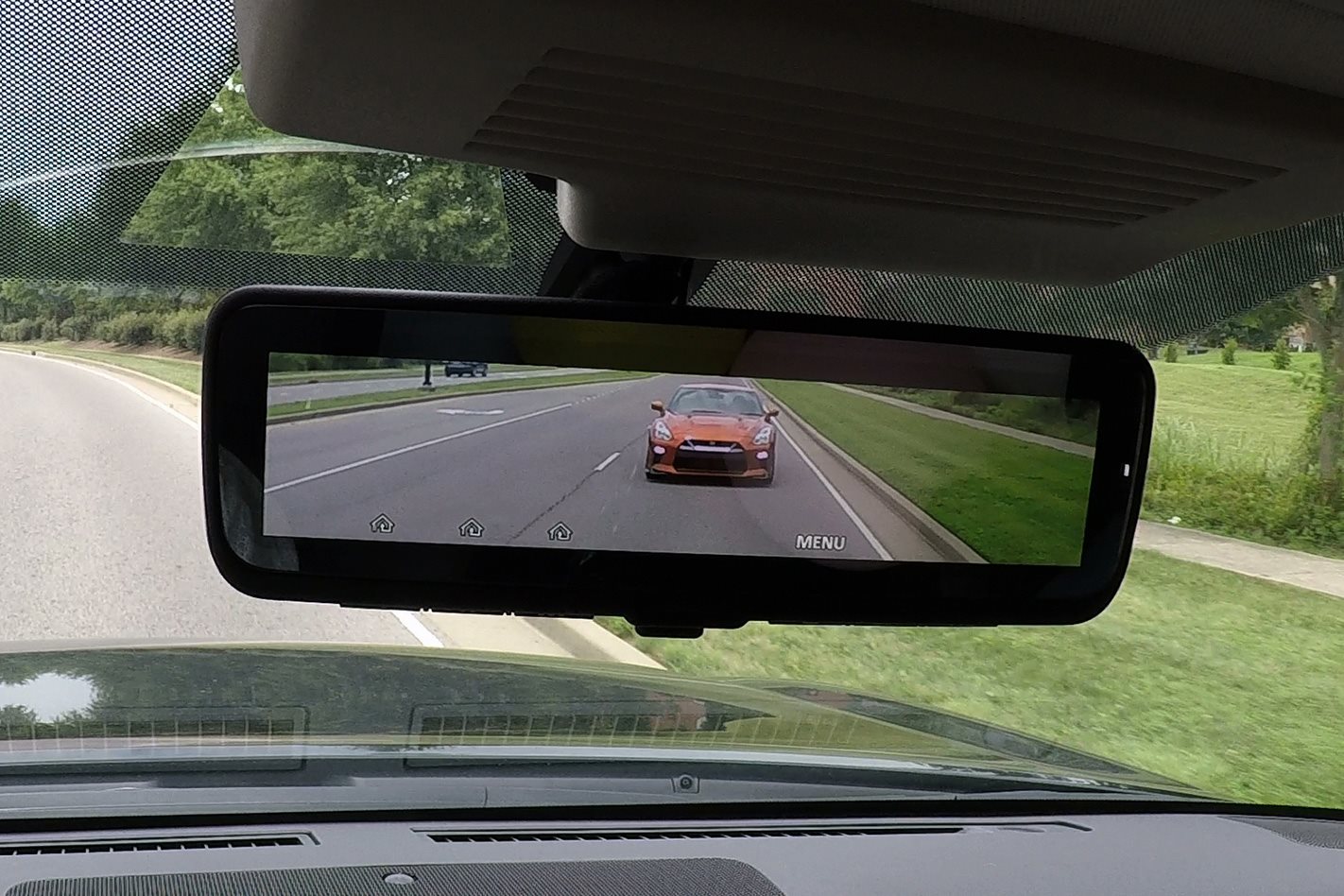 Something this big and heavy shouldn’t do the stupid things your right foot asks of it, but the Nissan Patrol does. The driver assist technology is welcome, given this thing’s ability to lift its skirts when needed, and its ability to defy the laws of physics is awe-inspiring. 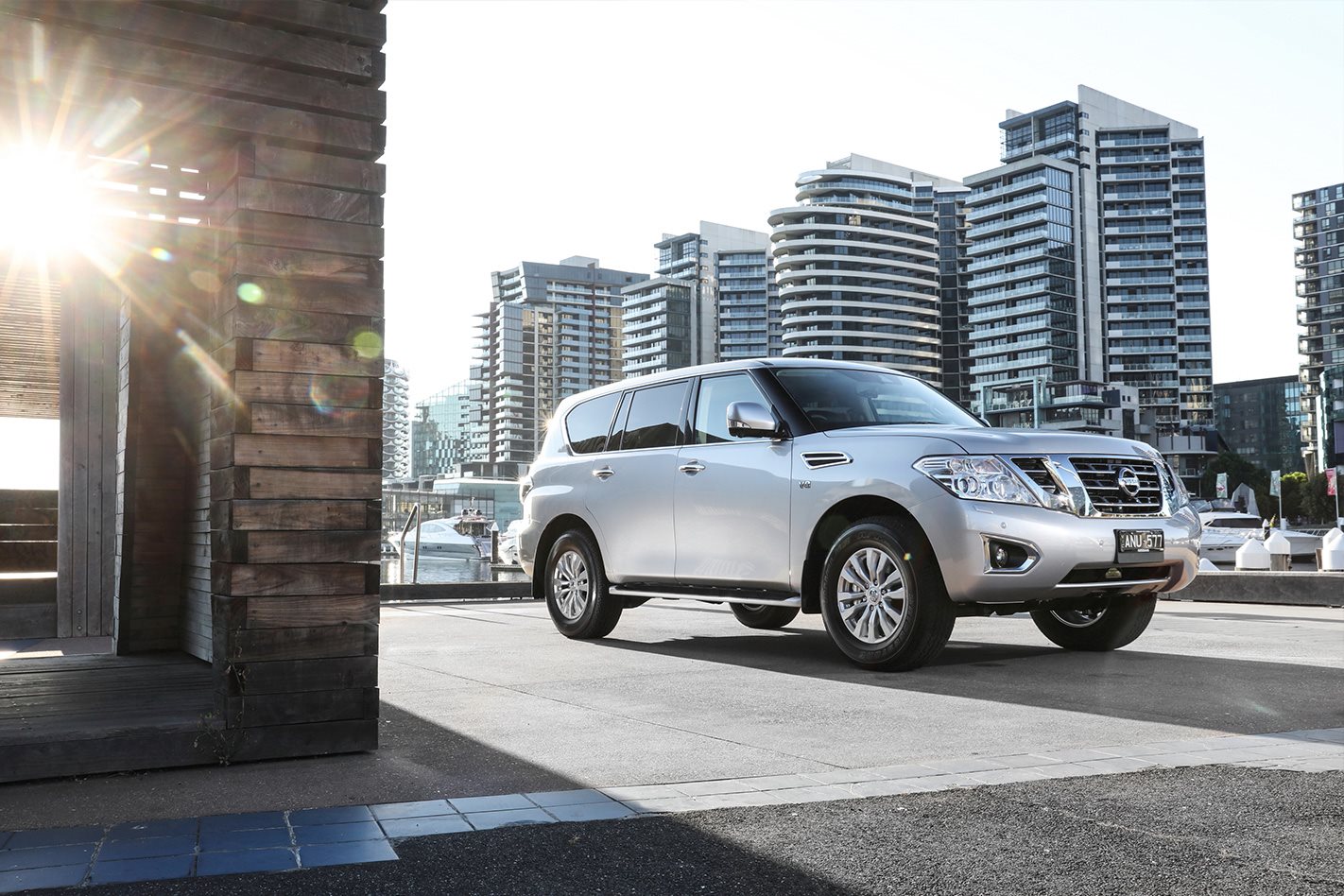 A CAMEL was once the default ship of the desert. But camels are unpleasant creatures that bite and smell, and make a noise similar to what you’d expect from a male walrus in the height of mating season. Thankfully, the camel’s role is now taken up by overtly large off-road vehicles, the likes of our subject here, the Nissan Y62 Patrol.

That “Y62” is an important distinction. Sock-tanned off-road enthusiasts Australia-wide are still crying into their campfire-fresh Bedourie-cooked damper rolls at the loss of the GU Patrol, a tough, rugged, diesel-engined workhorse as old as grandpa’s father’s uncle’s axe that was killed off by tightening Australian vehicle emissions standards. For the Y62 has gone soft in comparison, you see. 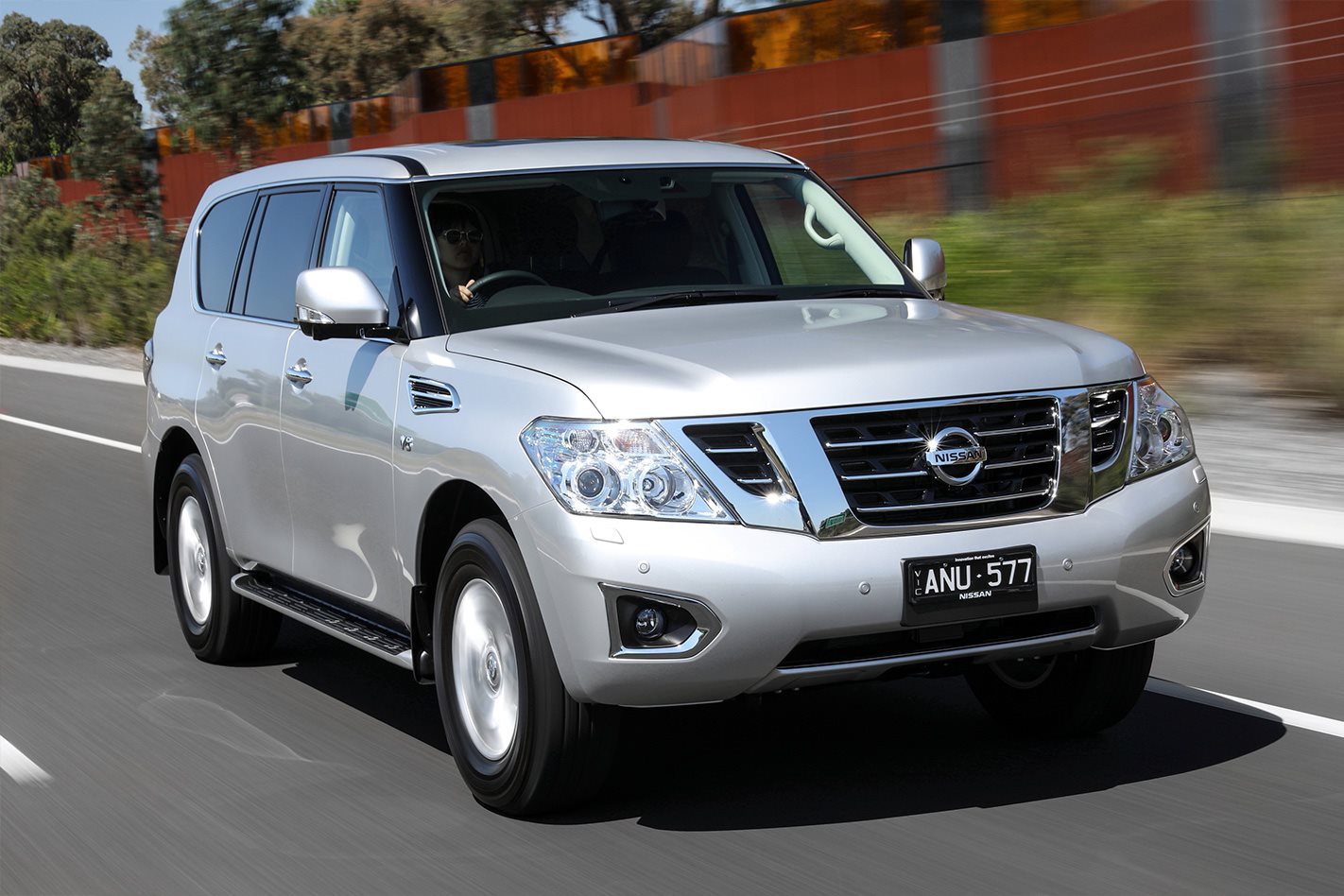 The reason behind this is that while the GU Patrol was a tool, the Y62 Patrol has morphed into something of a lifestyle choice. Cashed-up Middle East buyers, the Patrol’s biggest customer base, don’t want smelly diesel when petrol is cheaper and cleaner. They want space and power and a sense of luxury. And what they want, we get. That means a vehicle that’s 5165mm long, 1940mm tall and 1955mm wide. Boxy with rounded-off corners, it’s like a block of flats filling the rear-view mirror.

And it will fill the rear-view mirror quite quickly. Under that shovelnose bonnet is a VK56 90-degree 5.6-litre atmo V8 producing 298kW and 560Nm, and connected to a surprisingly short-travel throttle. Flex the right Blundstone and the Patrol will leap from a standing start, a distinctive V8 warble accompanying the surprisingly linear and brisk acceleration that should bring a grin to the maw of many a disciple of displacement. The Patrol is an automatic all-wheel drive with on-demand, push button/twist dial four-wheel-drive, but in default mode most of the torque is biased via the seven-speed automatic down to the rear, with the front axle stepping in when needed. Put a load on – we tried the Patrol with four people on board and towing a catamaran – and at freeway speeds the seven-speed auto will hunt through the gears as it chases the engine’s 4000rpm torque peak. On the freeway the Patrol sat on 15.3L/100km; on the city cycle we saw that soar to 22.4L/100km. 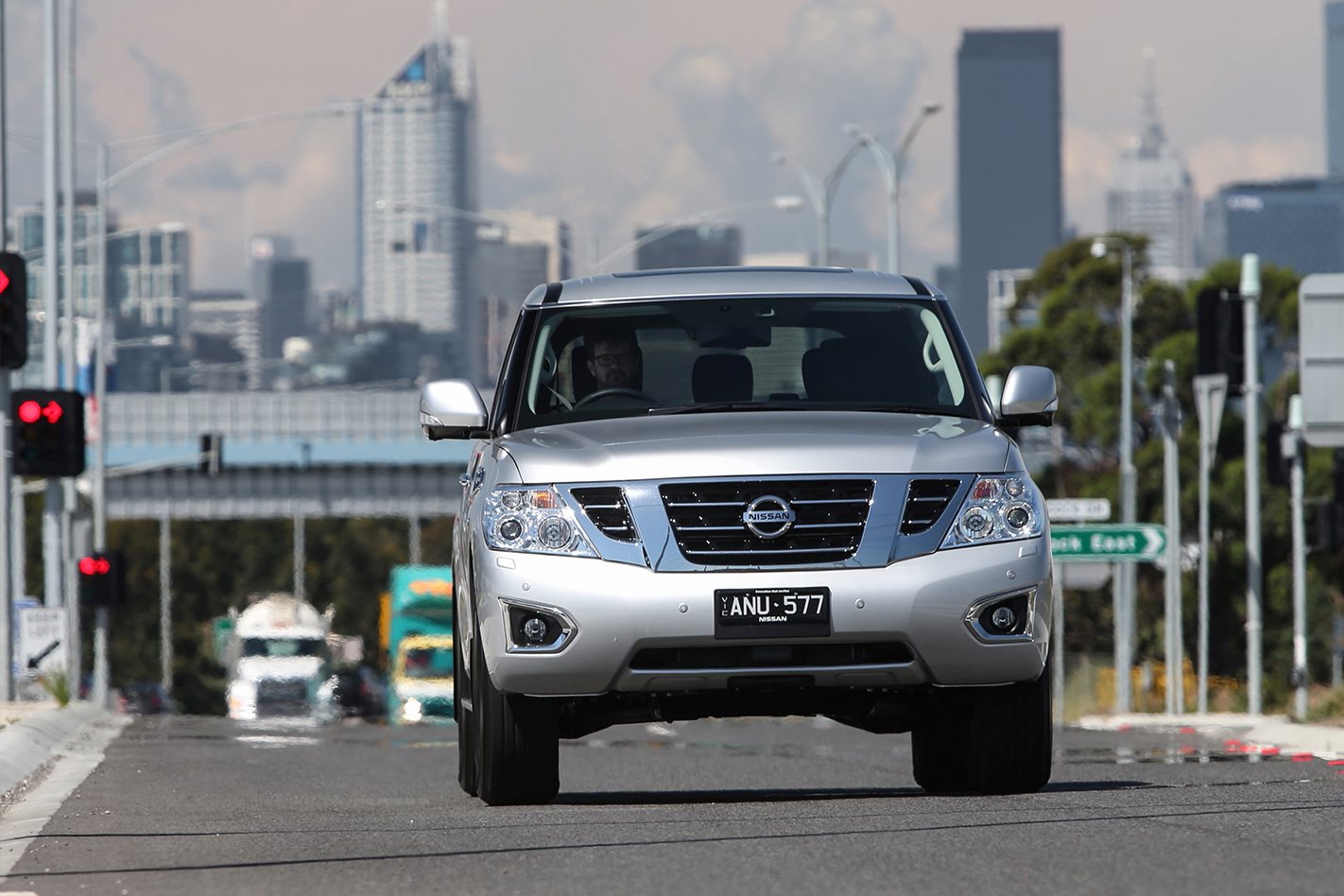 What’s also surprising is how well the upper-spec Ti-L corners. It comes with Hydraulic Body Motion Control, which minimises body roll when cornering and endows the Patrol with a smooth, quiet ride. The Patrol will tip in to a corner, but only to a point; push hard, and the 265/70 R18 Bridgestone Dueler A/Ts will howl in protest, but the passengers remain upright. Given that there’s next to no communication from the steering wheel or suspension, it’s an eerie, disconnected sensation – and you’ll likely have no clue when you’ve reached the limit until it’s all too late.

New to the top-spec Patrol are active cruise control, which leaves too big a gap to the car in front, and Intelligent Distance Control that will automatically jam on the brakes if the active cruise control isn’t set and stop you from snotting the new-look grille and foglamp housings on the back of the car in front. They’re a welcome addition, even if you’re perched so high in the driver’s seat – you climb, rather than hop in – that you have a commanding view over the traffic in front, giving switched-on drivers a chance to see what’s happening ahead rather than rely on the electronic nanny. 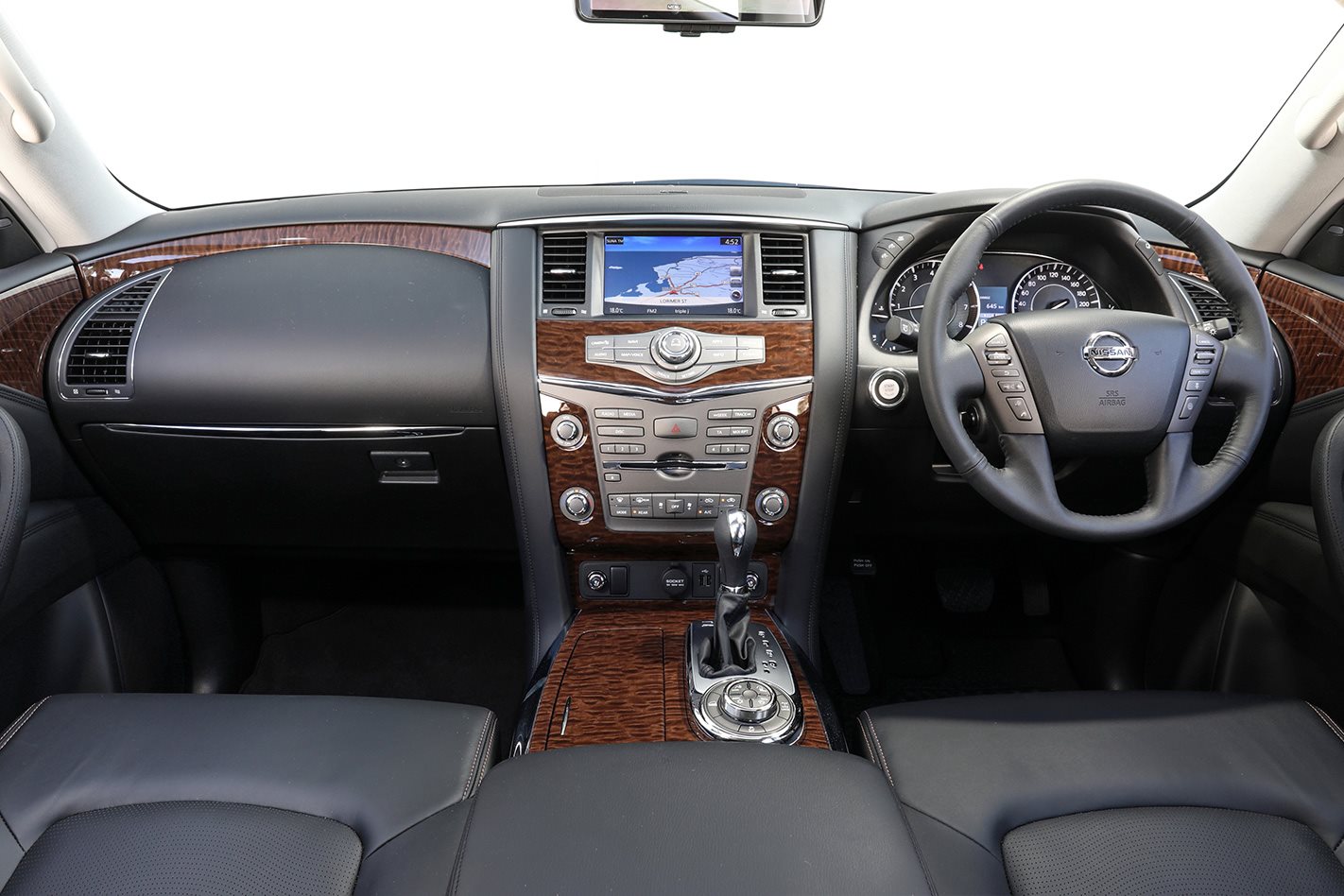 The top-spec Patrol’s trump card, though, is the “intelligent” rear-view mirror. There’s a LCD screen built into it that uses the reversing camera to build a picture of what’s behind the vehicle – native rearward visibility is nothing short of poor – so you can “see” through rear-seat passengers. There’s also a new surround view camera system, but the picture in the multifunction touchscreen high on the centre console is so small as to be almost useless at showing potential obstructions.

Inside, the Patrol feels wide, not helped by large, flat seats and a skinny-by-comparison centre console that in our test car had a cool box fitted between the front seats that can even be opened from the second row. There are headrest-mounted multimedia screens (they will play audio from a smartphone but not show the picture) for second-row occupants that hook into the DVD player, and room for up to eight adults via a 60:40 split-fold third row that doesn’t lie completely flat when stowed. From the driver’s seat, the small monochrome digital display is limited in function and doesn’t even include a digital speedo. 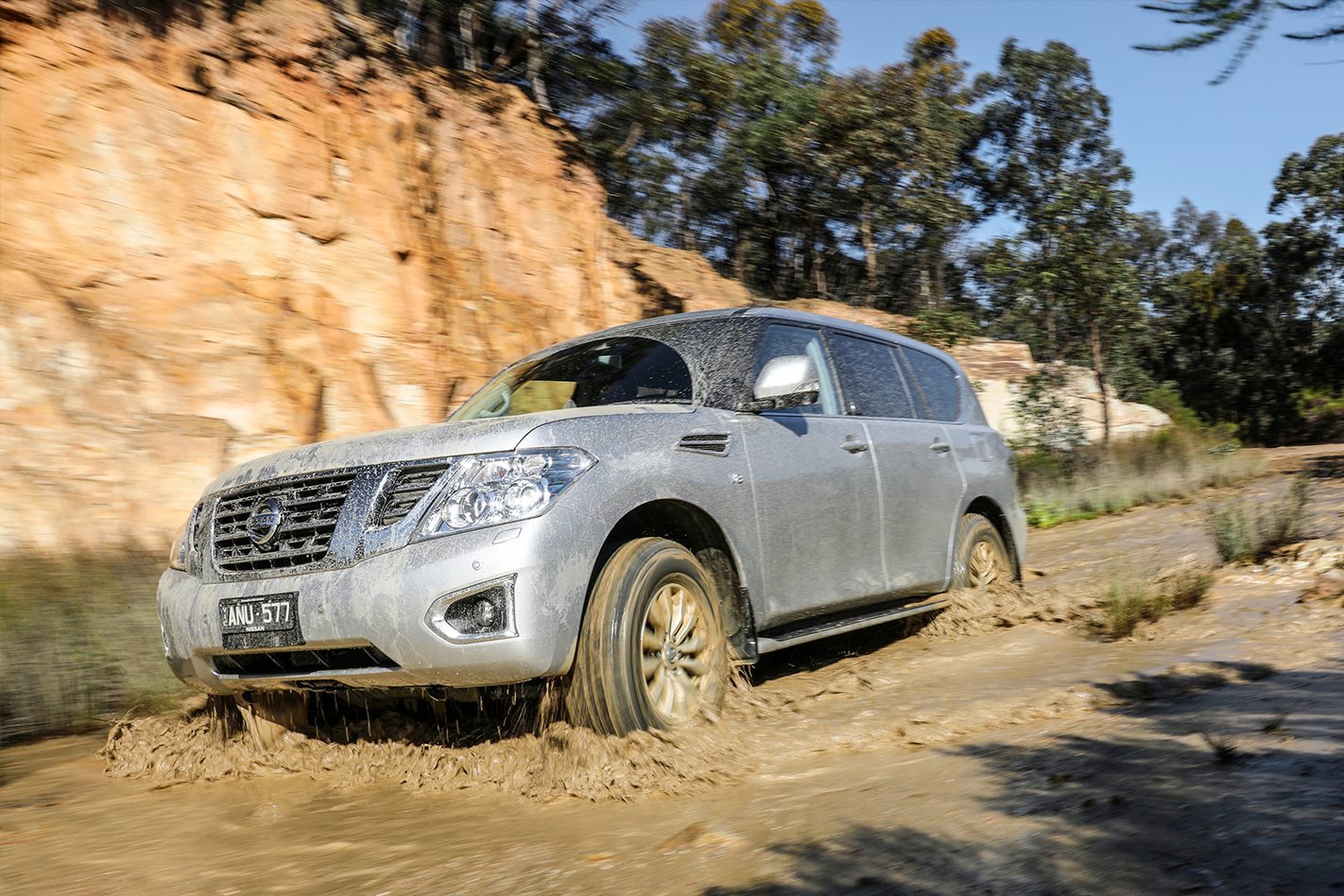 We took the Patrol for a short run on dirt, where it felt little different to driving it on bitumen, apart from the odd corrugation. It’s surprising how a 2.7-tonne vehicle can smooth out a rough surface with that much ease.

The Nissan Patrol isn’t an obvious choice as a commuter car, and you’re going to need a strong and specific reason to buy one. Whether that sonorous V8 is enough reason, you can be the judge. 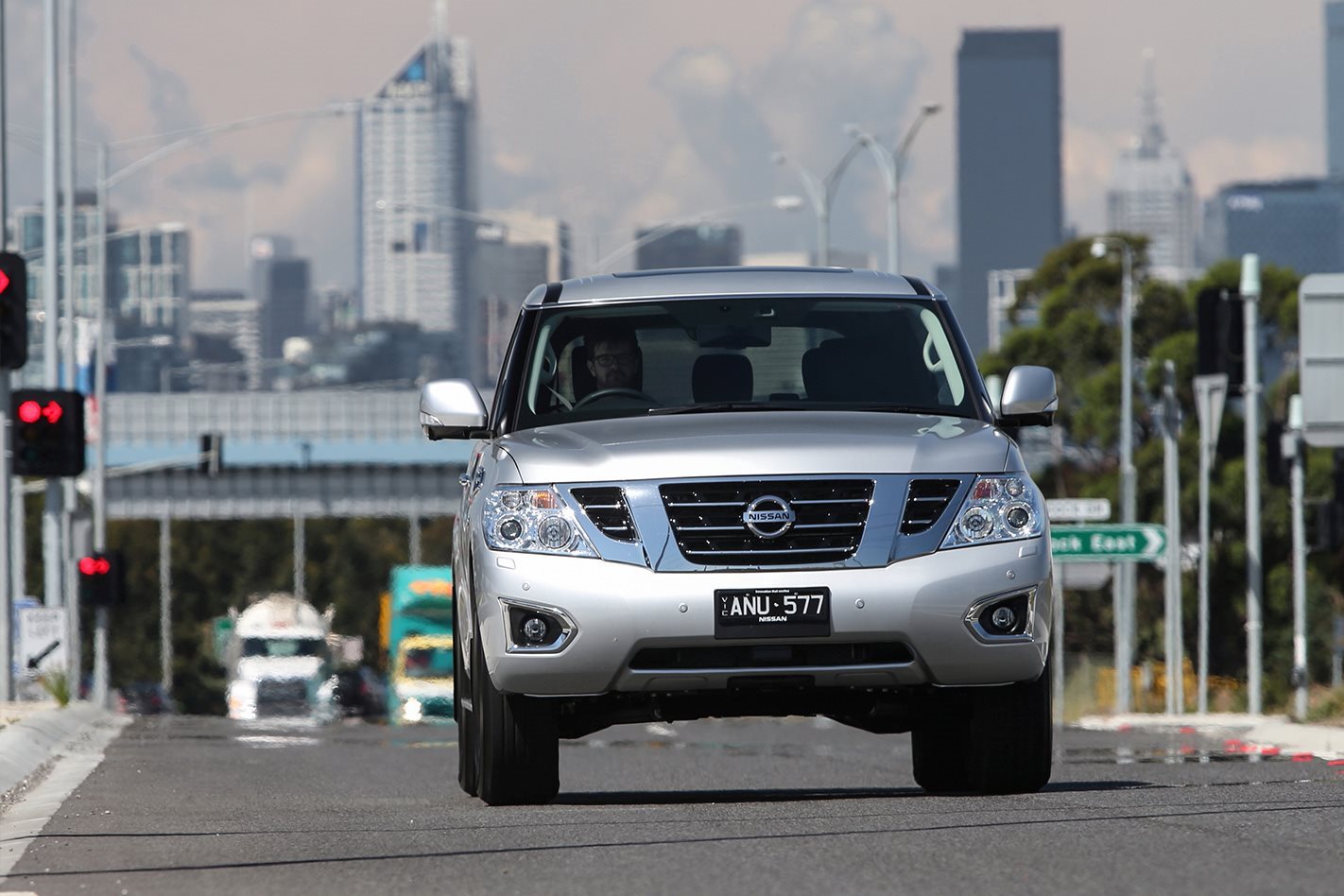 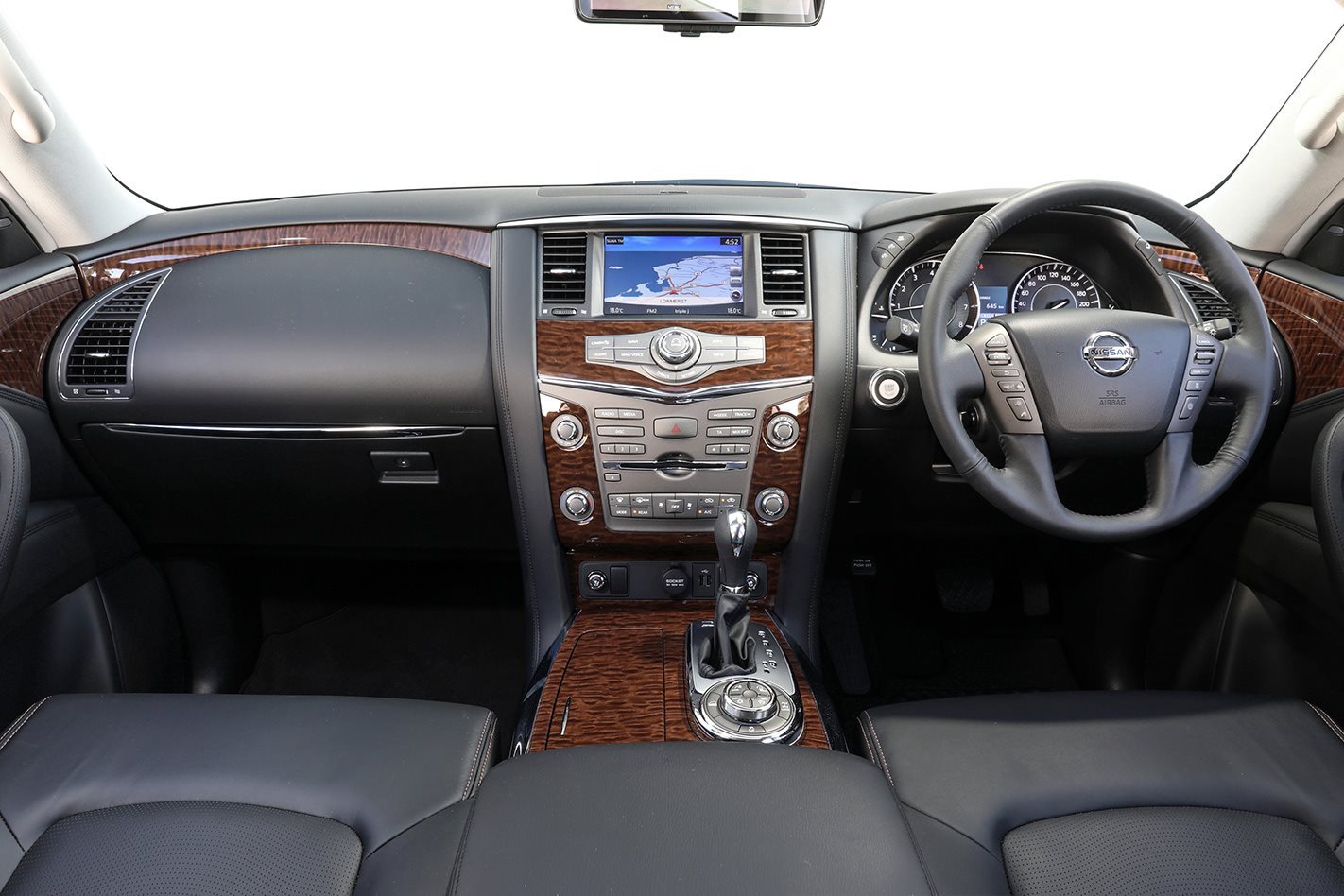 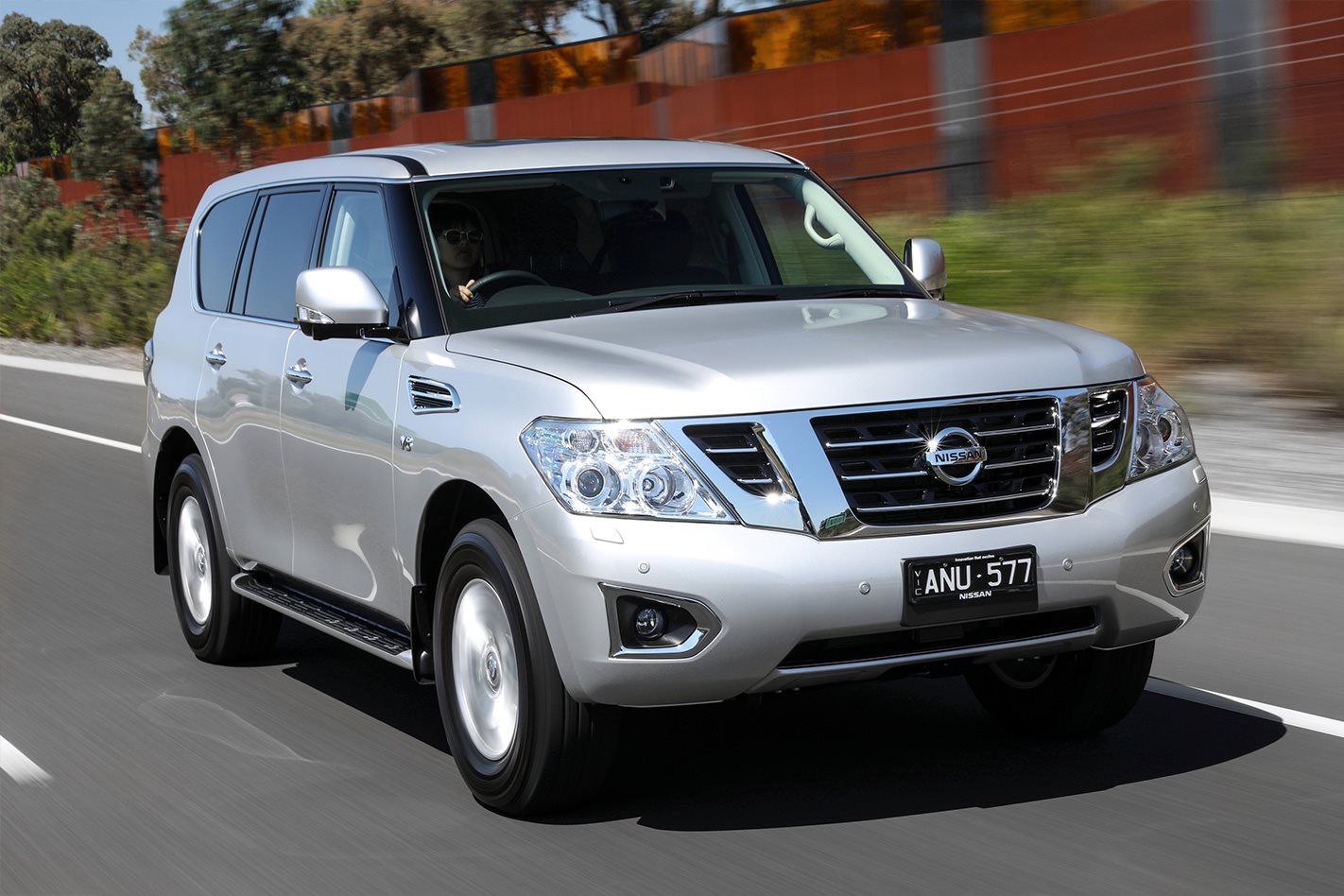 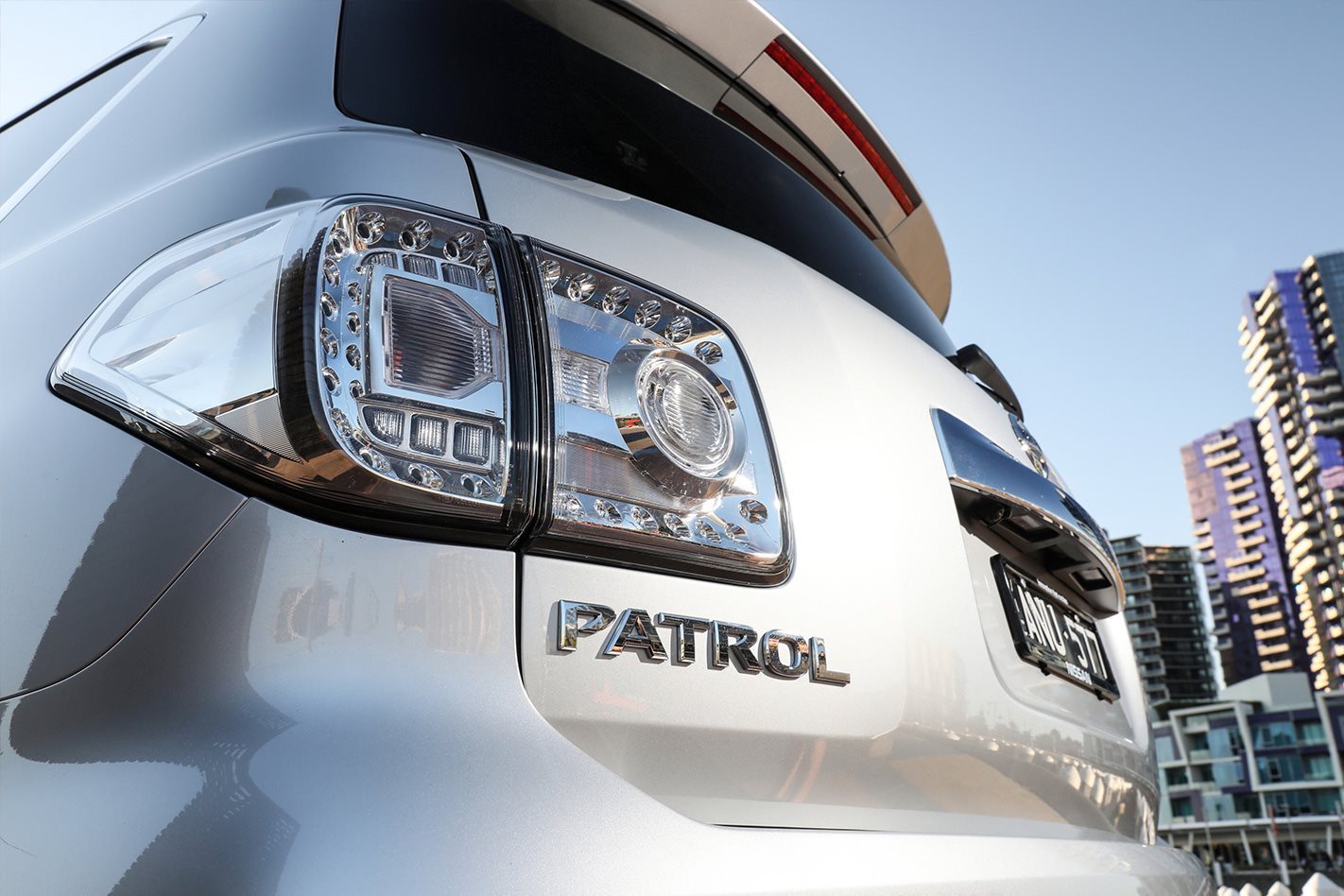 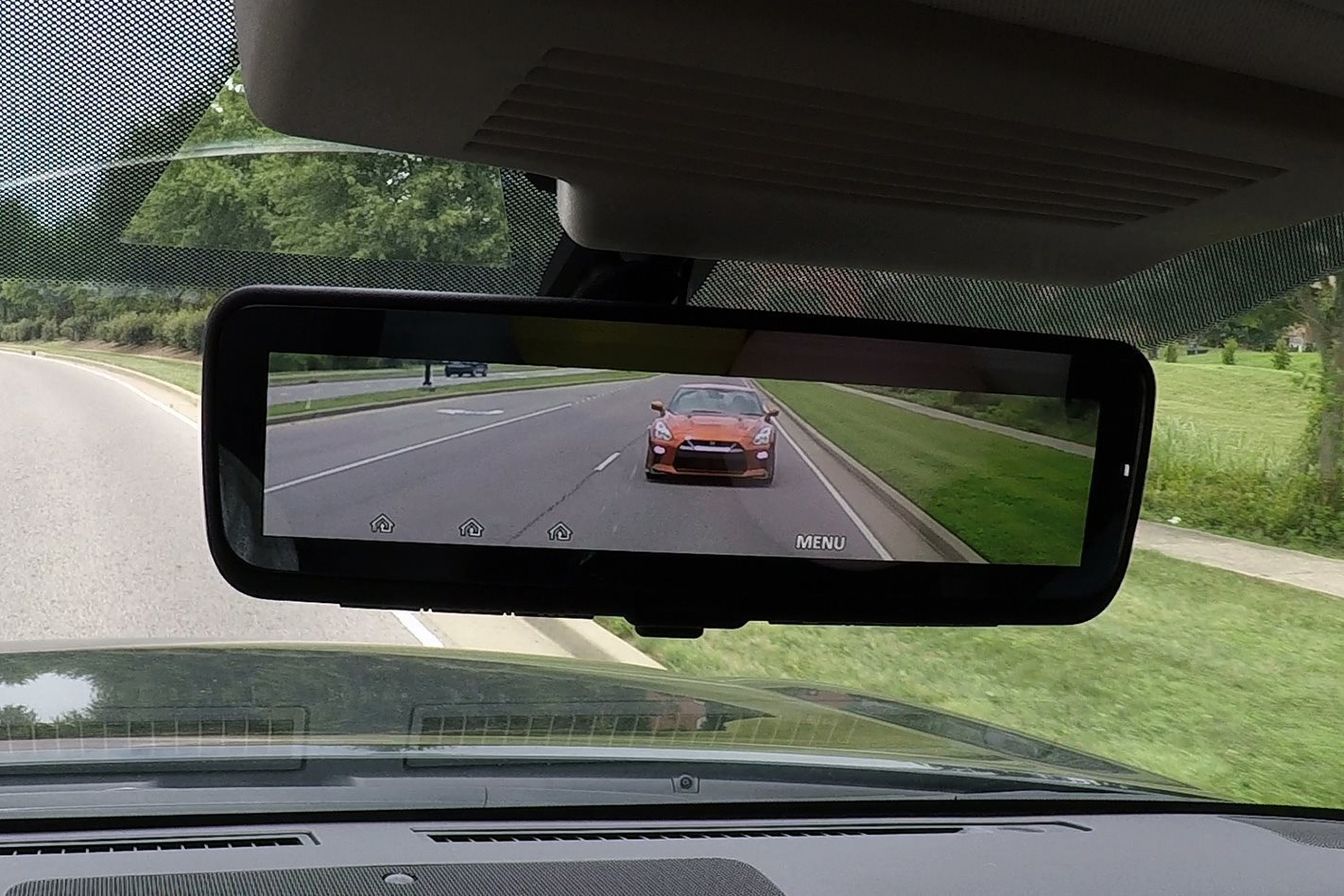 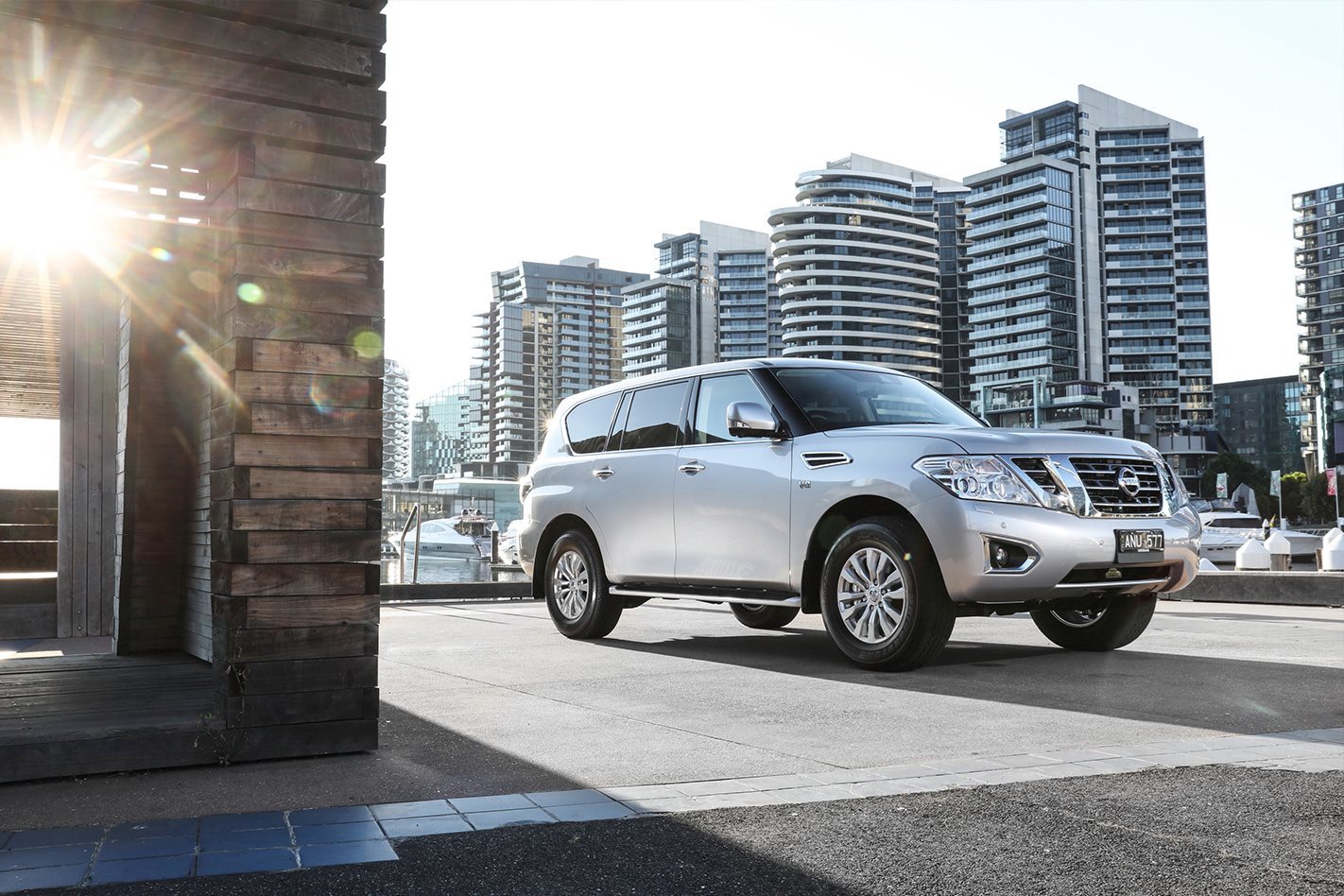 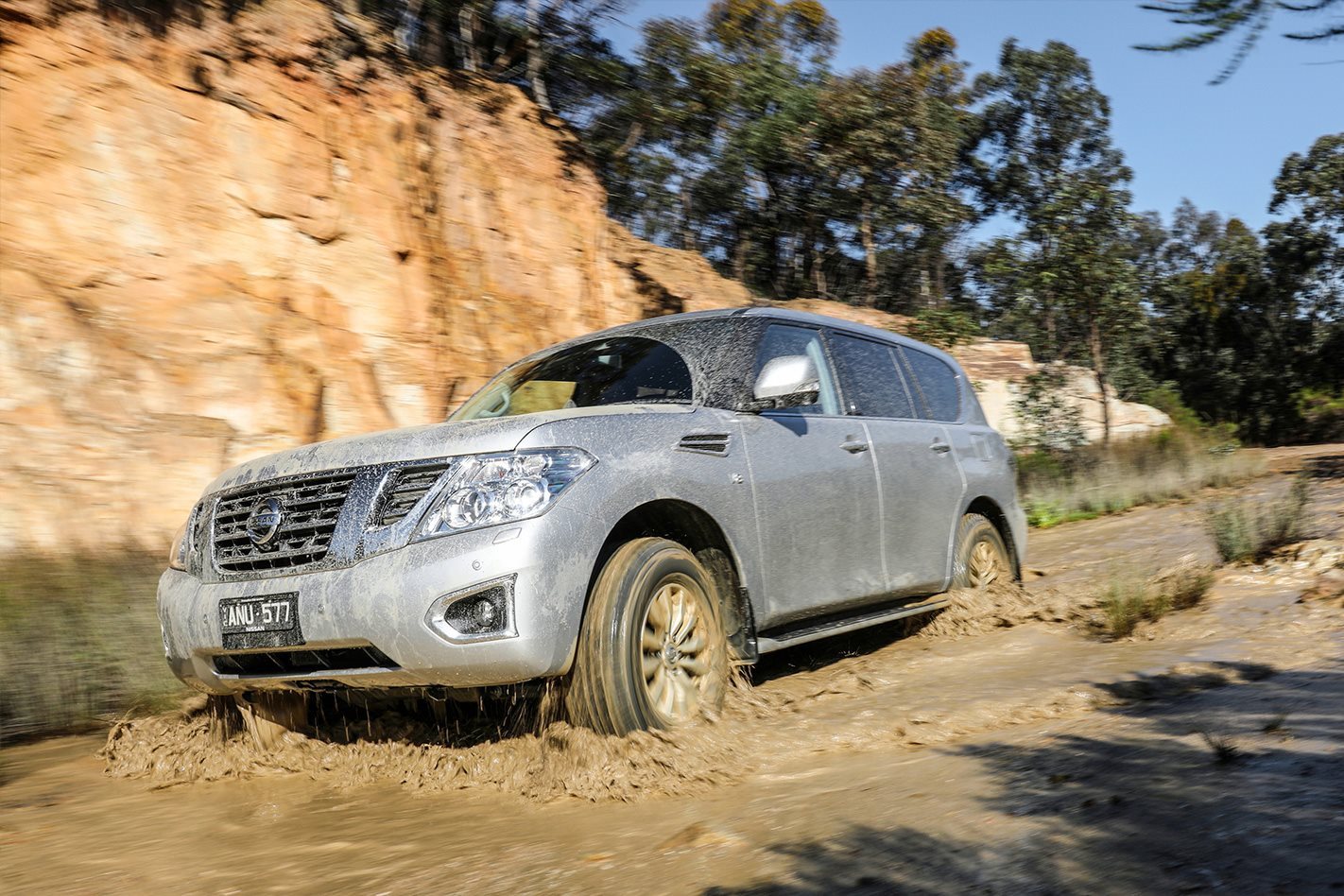