The Wheels Verdict: While the M135i struggles to usurp its predecessor, the 118i is better than the car it replaces in numerous key areas. It still offers pleasing, if not overtly engaging dynamics, but now has an important extra layer of space and practicality with up-to-date tech. Whoever said the base model is the one to skip?

The BMW 118i is the entry-level model for the 1 Series range. It’s an all-new generation, one that has adopted a front-wheel-drive architecture and an increased price. To say it has been controversial is an understatement. 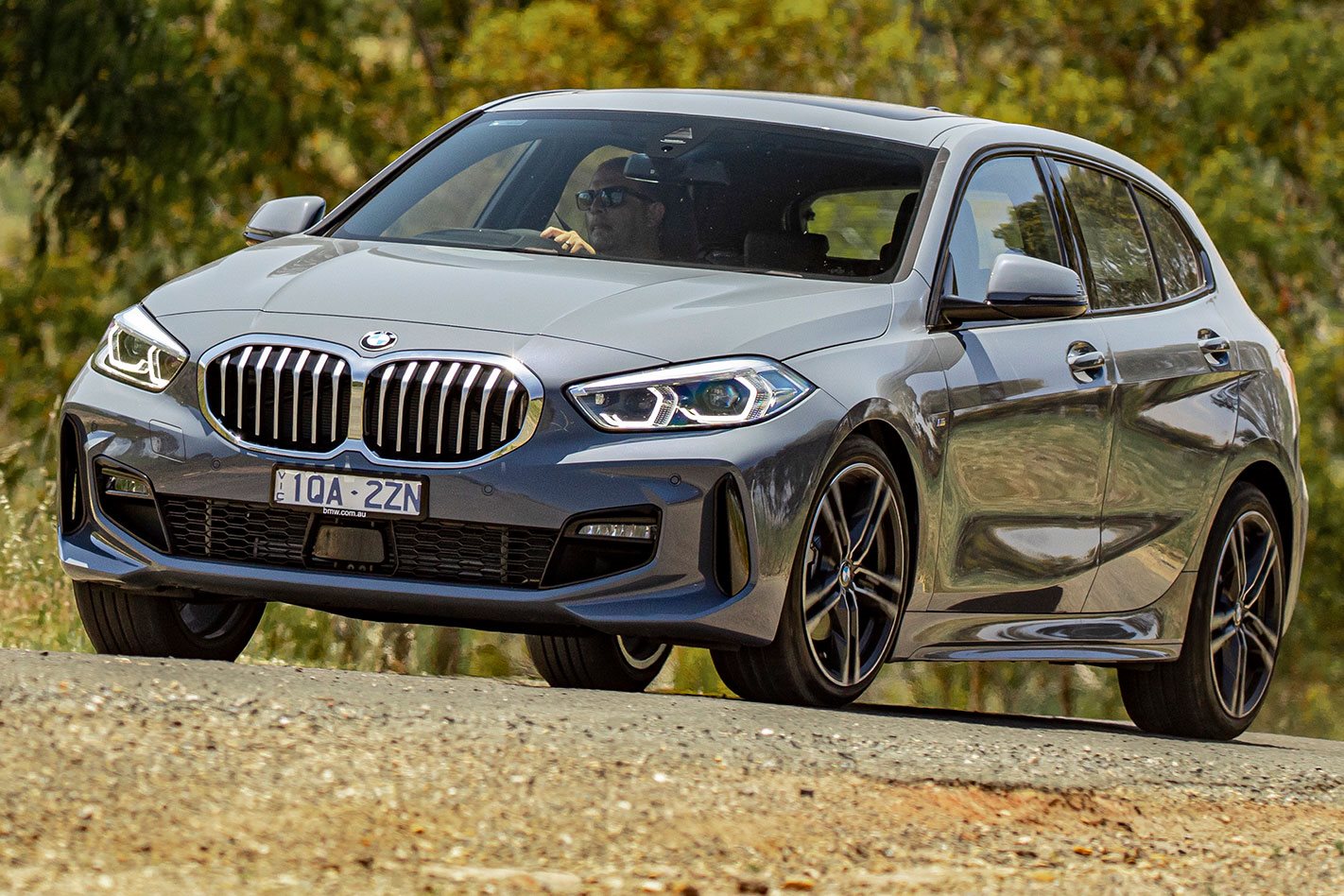 The hot hatch M135i has been grabbing all the spotlight for good reason, but the 118i is a strong contender within the premium hatch segment. Slated to be a strong seller for the brand, it’s only fair we get behind the wheel of the base car, give it some time in the sun and see what’s what. .

As they say, it’s all about swings and roundabouts. What benefits one, doesn’t always benefit the other. That’s what has happened with the third-generation 1 Series and its switch to the UKL front and all-wheel-drive platform. The base 118i package is arguably better for the shift, while the M135i is now missing its rear-wheel-drive frivolity.

You could argue that anyone in the market for the 118i isn’t too concerned about ‘sheer driving pleasure’. Hence, the benefits in packaging and efficiency mean far more than the loss of a tailshaft and drive to the rear wheels. At launch the 1 Series range comprises two variants, the 118i and M135i, while we’d imagine something is in the works to fill in the middle ground. M Sport is now the standard line for 1 Series. 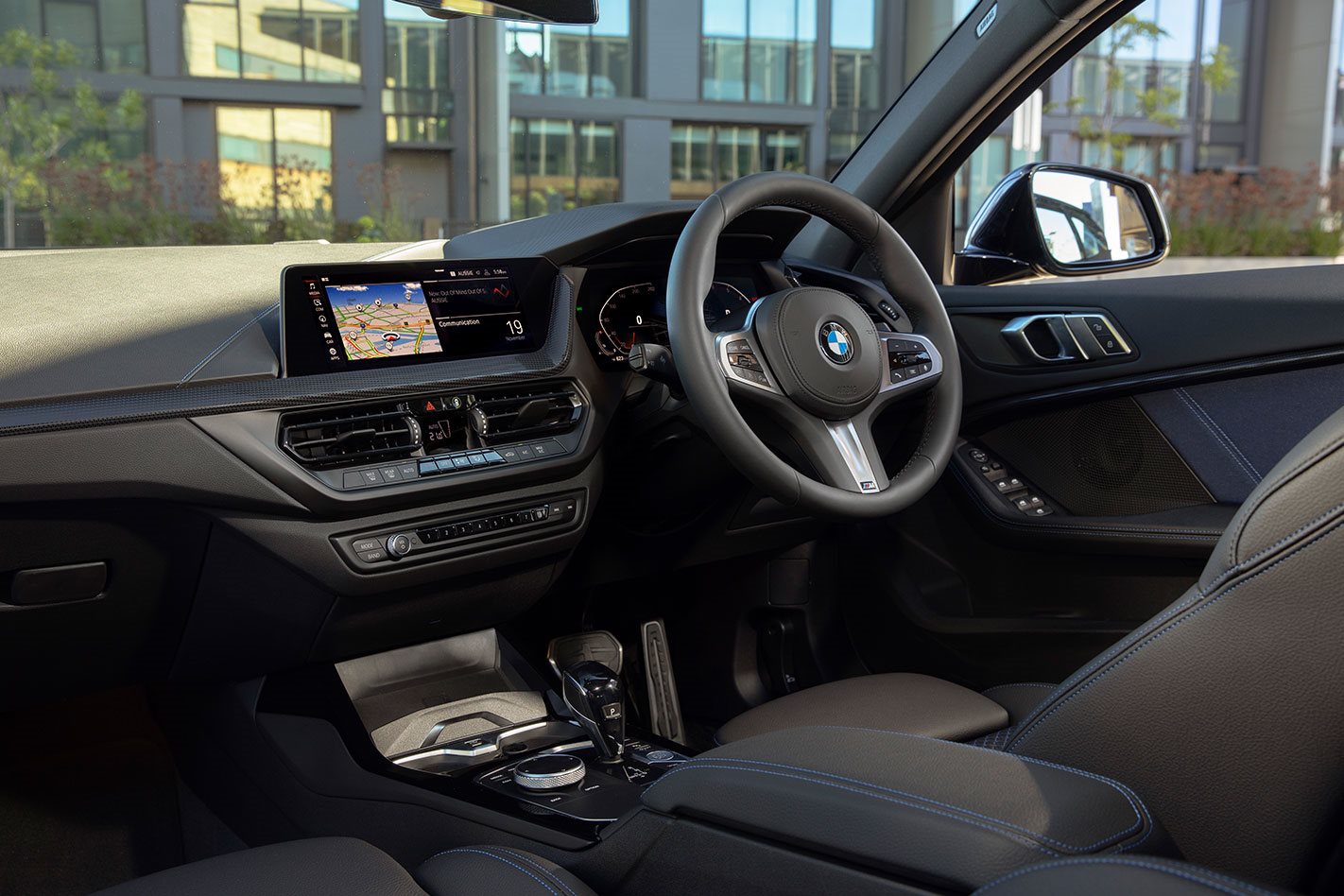 Inside, the F40 generation has skipped ahead of the F20 in leaps and bounds. The ambience and quality of materials is markedly better than the model it replaces. BMW’s new design language fits the 1 Series well. The six-colour lighting package livens the mood at night, and you can move up an inch in diameter to 19-inch alloys for added visual appeal.

BMW has loaded the 118i with standard tech to justify the $4000 price hike. BMW’s seventh-generation operating system features (with iDrive), while the intelligent personal assistant can, essentially, take orders and carry out commands. Simply say “Hey BMW” and you’re away. Two 10.25-inch colour displays control both the infotainment (touchscreen) and instrument cluster. 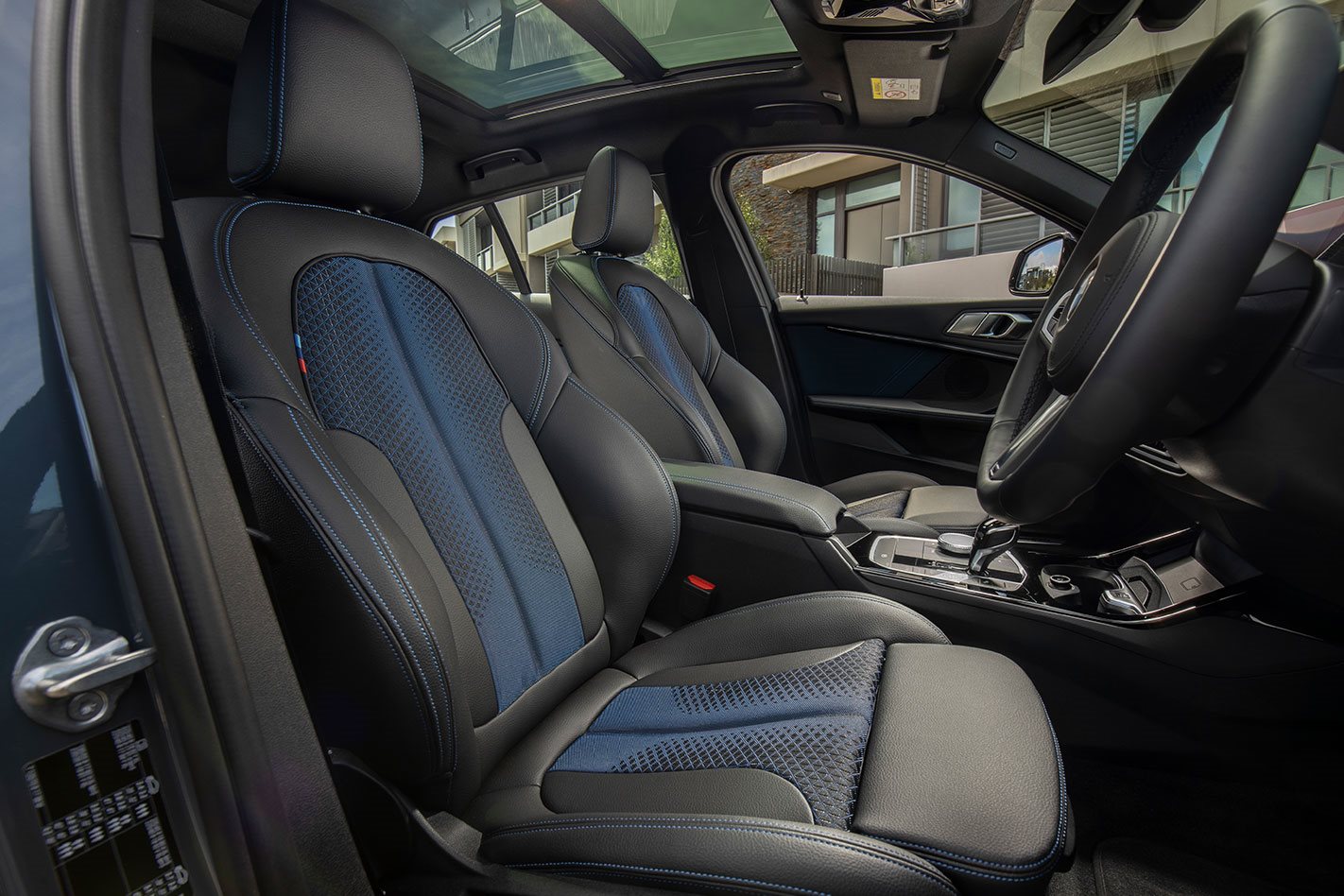 The former now feature wireless Apple CarPlay sans a paid subscription (hallelujah) and the latter brings the instrument cluster into the digital age – but it’s not the best out there. Sadly, Android Auto is still missing in action. Wireless s phone charging and a crystal-clear head-up display are also standard.

The 1 Series can even receive remote software updates – just like a Tesla – and if you lose your conventional keys, you can lock and unlock the car with an app (via an Android phone) or a digital key that resembles a credit card. A panoramic glass sunroof is a $2000 option, while gesture control and reverse assistant (where the 1 Series automatically retraces your path) are available. With around $10K worth of optional packages, it’s easy to get carried away. 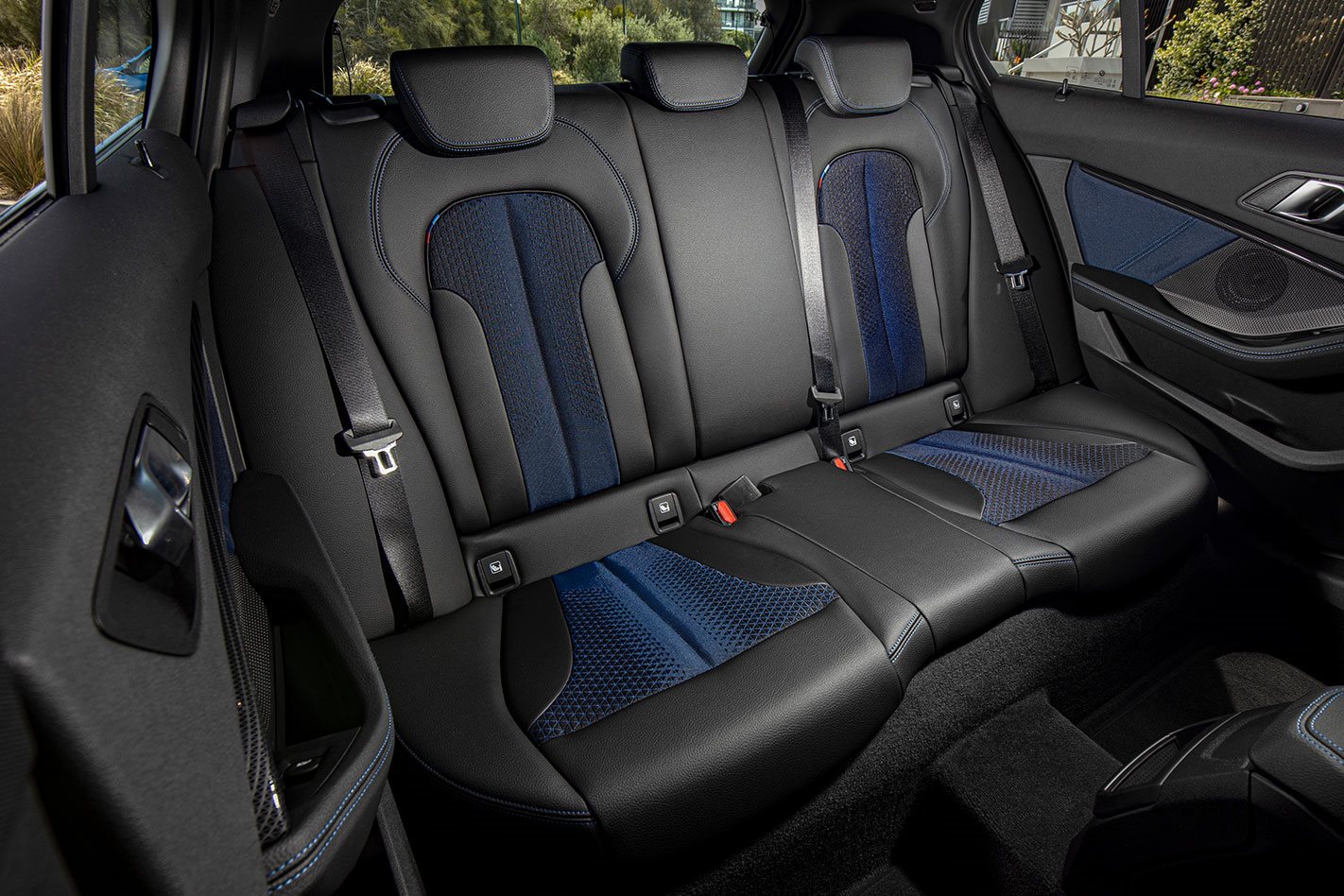 Despite a 5mm chop in overall length (4319mm), the boot space has increased by 20 litres to 380 litres, which puts it ahead of the Mercedes-Benz A-Class. The rear seats fold in a 60:40 fashion (you can option a 40:20:40 split) and for the first time in a 1 Series there is an optional powered tailgate ($731). A 20mm decrease in wheelbase (2670mm) hasn’t cut rear legroom, with BMW claiming an extra 33mm of knee space. Headroom is decent without being ample for tall passengers.

Under the bonnet is the modular 1.5-litre three-cylinder turbo we’re already familiar with given its use within BMW and Mini. In 118i guise it delivers 103kW and 220Nm for a 0-100km/h time of 8.5 seconds, while its combined fuel economy of 5.9L/100km is competitive. The powertrain is smooth and tractable with useable torque throughout the rev range – against its entry-level competition, it stacks up well. 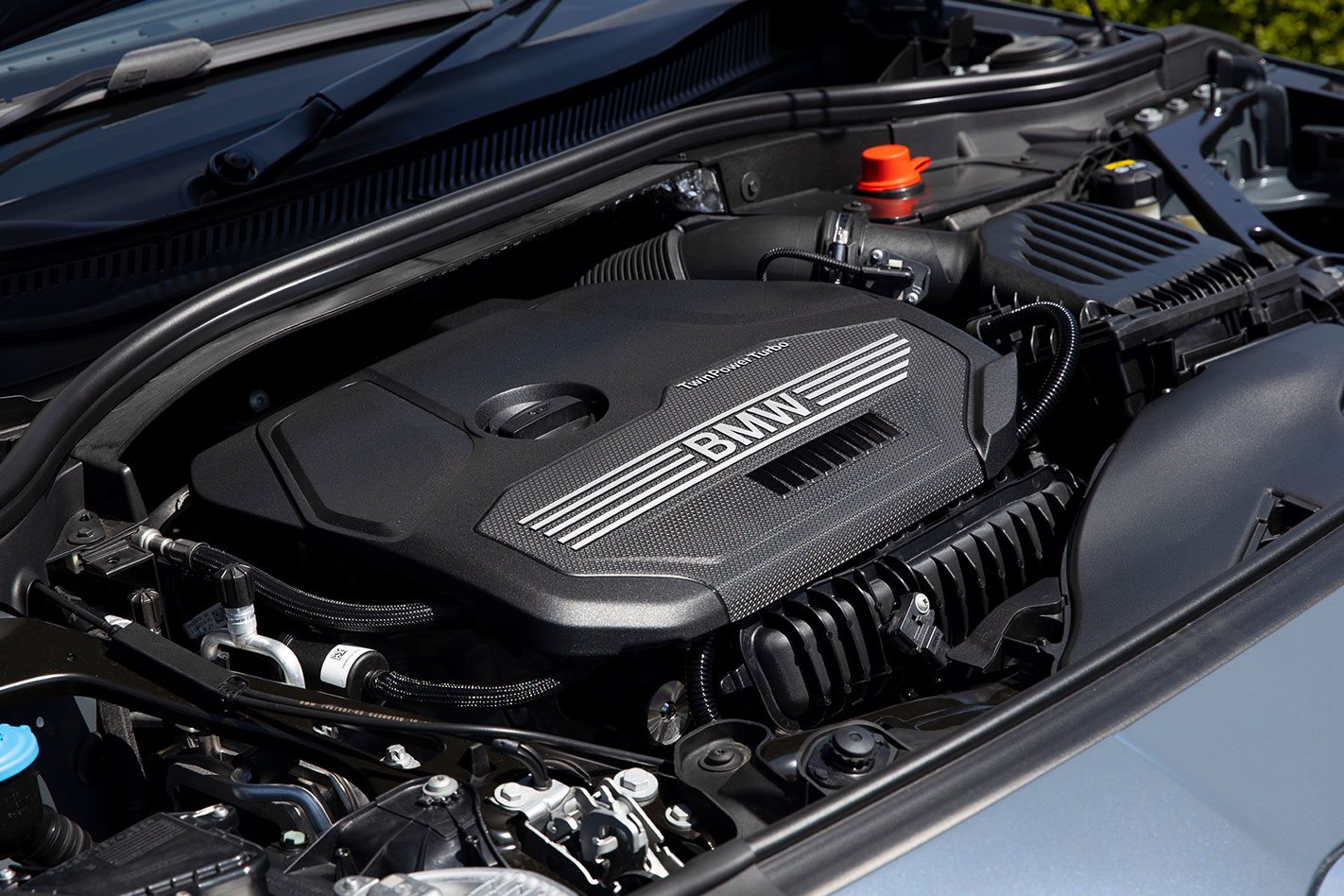 The soundtrack is pretty cool, too, with just enough of the traditional three-pot thrum to make it interesting. Unlike the M135i, the base-model 1 Series bypasses the torque-converter eight-speed automatic for a seven-speed dual-clutch transmission. It’ smooth on the run, with only slight hesitation and jerkiness at slower speeds. The steering is direct, but the weighting is a little artificial in Sport mode.

On standard 18-inch wheels (with run-flat tyres), the ride quality displays a level of sophistication despite revealing a somewhat busy nature on certain surfaces. It’s a shame that, given the M Sport suspension tune, you can’t option adaptive dampers for an extra layer of duality. Overall, the 118i displays composed and safe handling characteristics rather than truly fun. Road noise and NVH levels are decent for the segment. 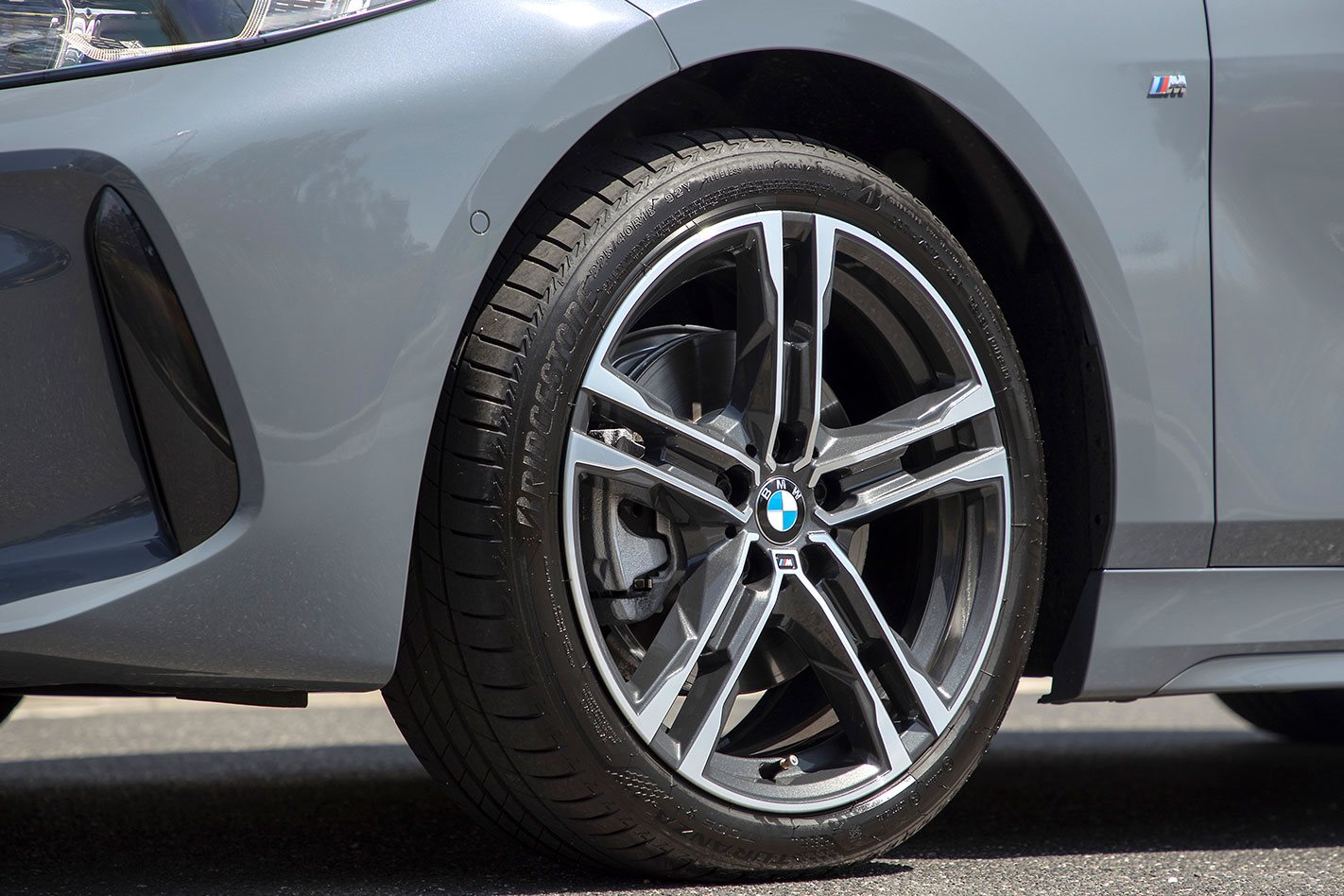 The fact the base 1 Series is now FWD is, to all intents and purposes, a bit of a non-event. At $42,990 the cost of entry has increased, but the return on investment is higher in the 118i. The base 1 Series now feels truly premium inside, it’s roomier and more practical, and BMW throws in abundantly more standard kit. Now that’s progress. 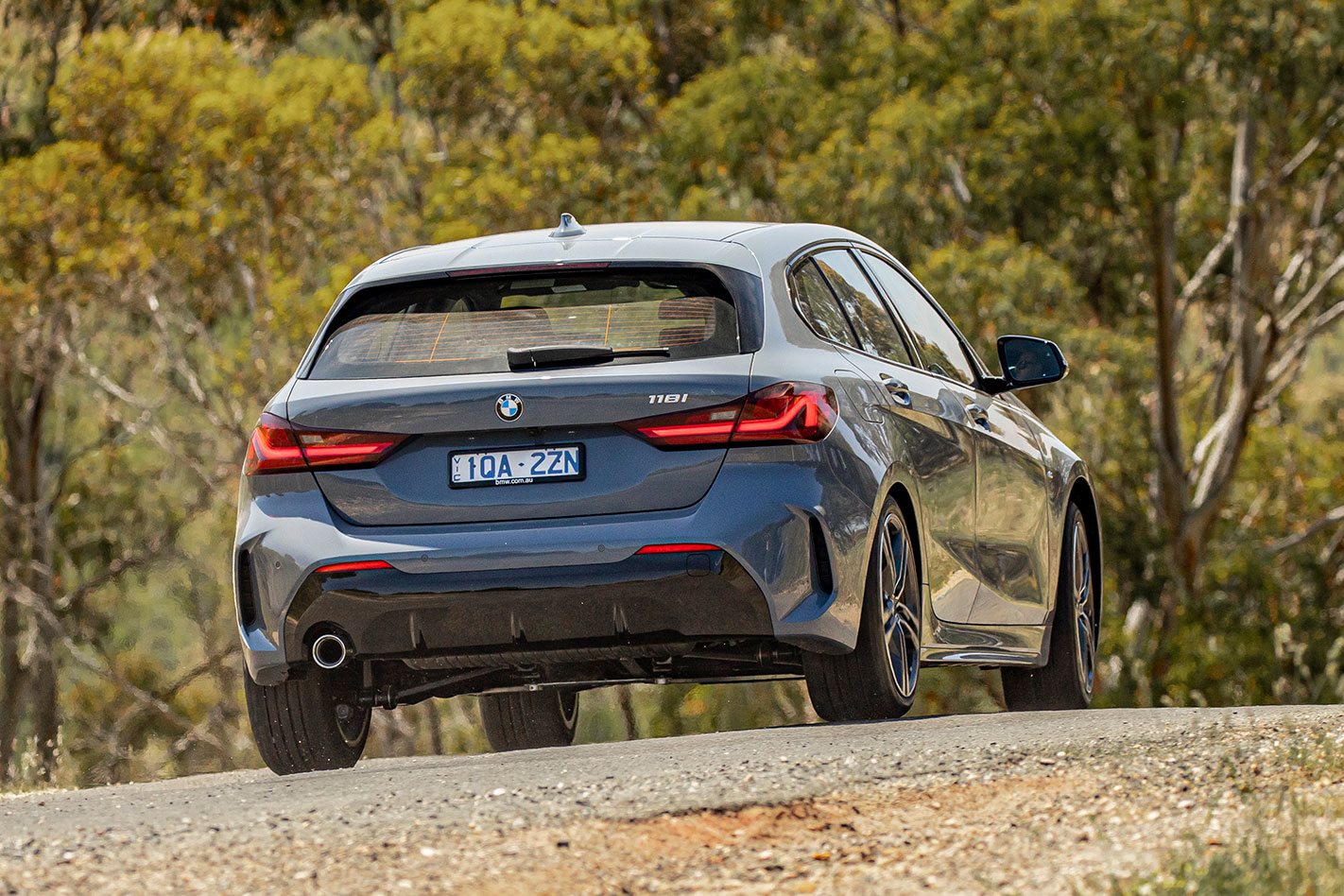