The Wheels Verdict: Never before has choosing between a BMW and an Alpina been so tough. The XD3 is more expensive than the X3 30d and M40i, but you’re paying for increased performance over the former, extra fuel economy in comparison to the latter and an added layer of cool factor neither fully achieves. It’s not cheap but we have a feeling those who want the XD3 will be more than willing to pay the premium. 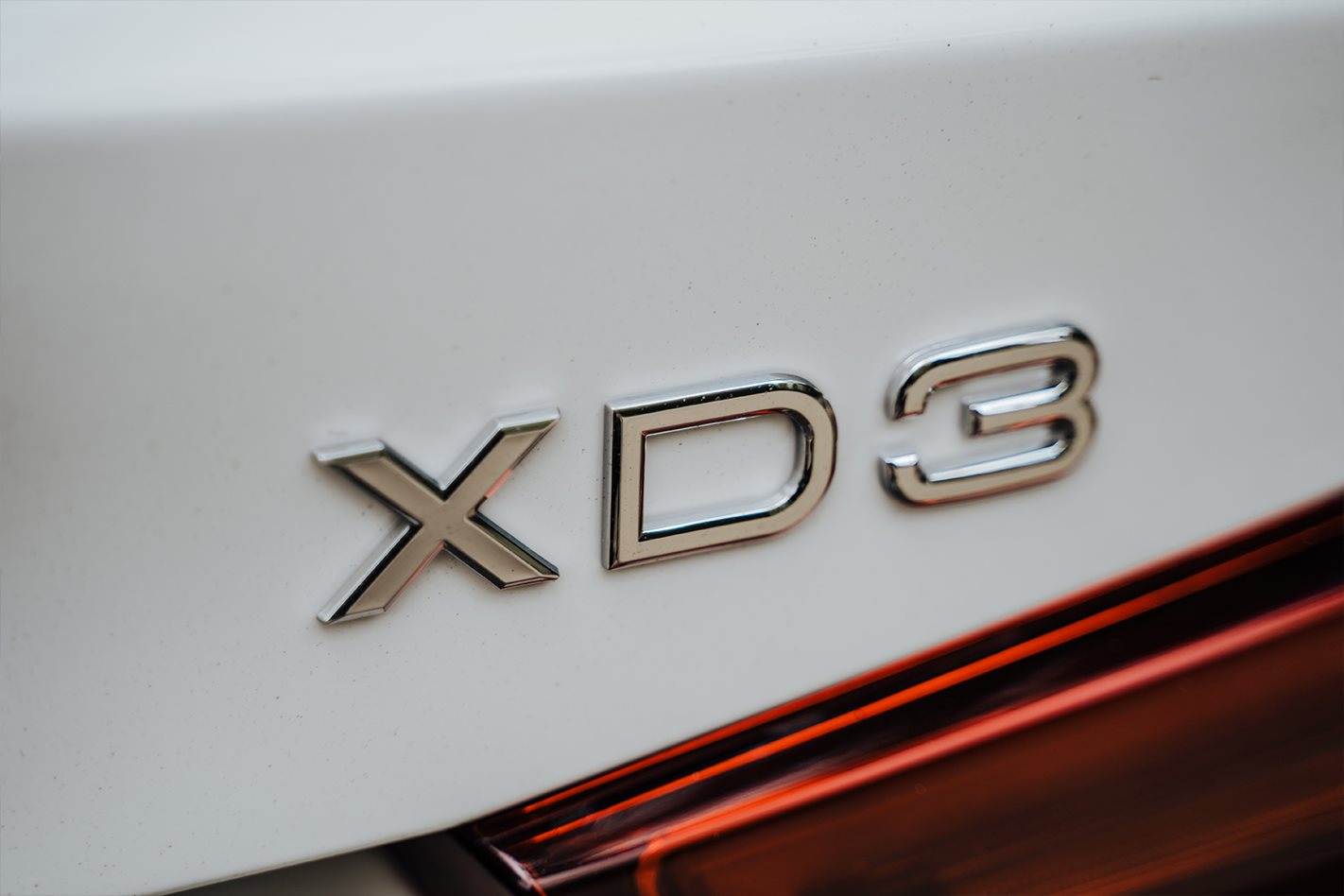 WHAT IS THE ALPINA XD3?

The Alpina XD3 begins life alongside other BMW X3s in Spartanburg, South Carolina. It’s then shipped to Germany for a hefty dose of Buchloe’s magic, gaining styling tweaks and mechanical upgrades before landing here in Australia. The XD3 sports a twin-turbo diesel straight-six engine and all-wheel drive in a practical SUV body. It fills a niche within a niche but, given Alpina’s modest sales aspirations, it’s certain to be a success.

Alpinas are often quite discreet. It’s that ‘those who know, know’ mentality. The XD3 SUV is something new for the brand and if what Alpina proclaims turns out to be true, it will be its most popular model. So we’d better check it out then. 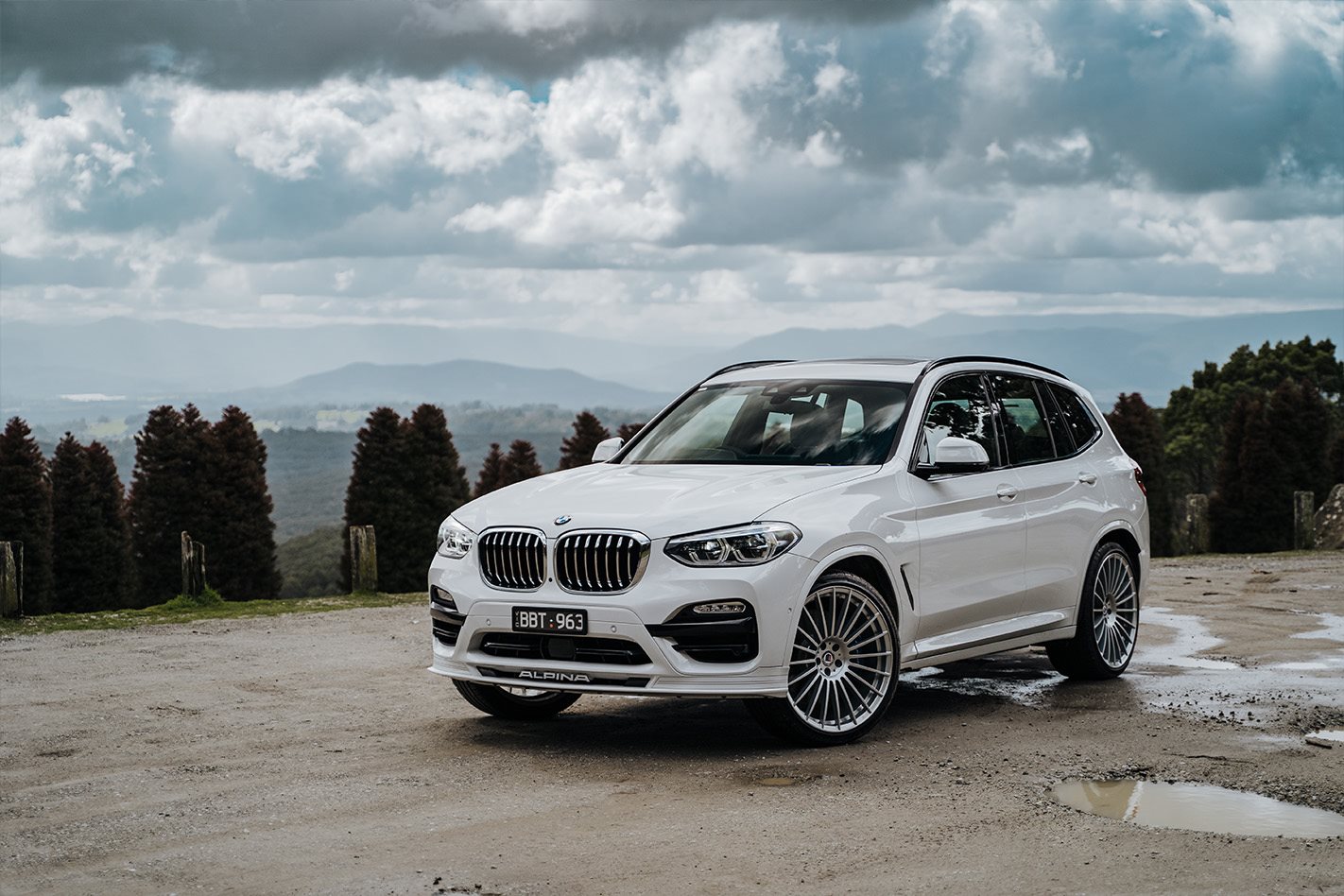 Putting a price on exclusivity is becoming a sure-fire way to make money within the car industry. However, informed punters often see through thinly veiled cracks quite quickly. Essentially a BMW that’s gone to a further finishing school, Alpina has always played in this price-premium space. Sometimes it works, sometimes it doesn’t. If you’re not a fan of spoilers skip this next bit – the Alpina XD3 is firmly in the former category.

Why should you fork out an extra $10,000 over the B58-powered BMW X3 M40i or a whopping $26,000 more than the torquey X3 30d? Beauty is in the eye of the beholder, but the exterior design is stylish and flush with heritage. The standard wheels are 20-inch items, but we expect virtually all buyers to tick the box for the optional 22-inch Alpina Classic alloy wheels which fill the colour-coded flared wheel arches. At the rear is a custom valance, while the Alpina script sits proudly in the lower chin spoiler.

Inside the Alpina treatment is restrained, but you can feel rather than see the added luxury thanks to the upgraded materials. The Alpina piped sports seats, blue-faced dials, blue-and-green stitched steering wheel leather, Alpina sill badges and a build plaque help differentiate the cabin from the X3 norm. Of course, that’s no bad thing. And the latest iDrive system (with touchscreen) works a treat. 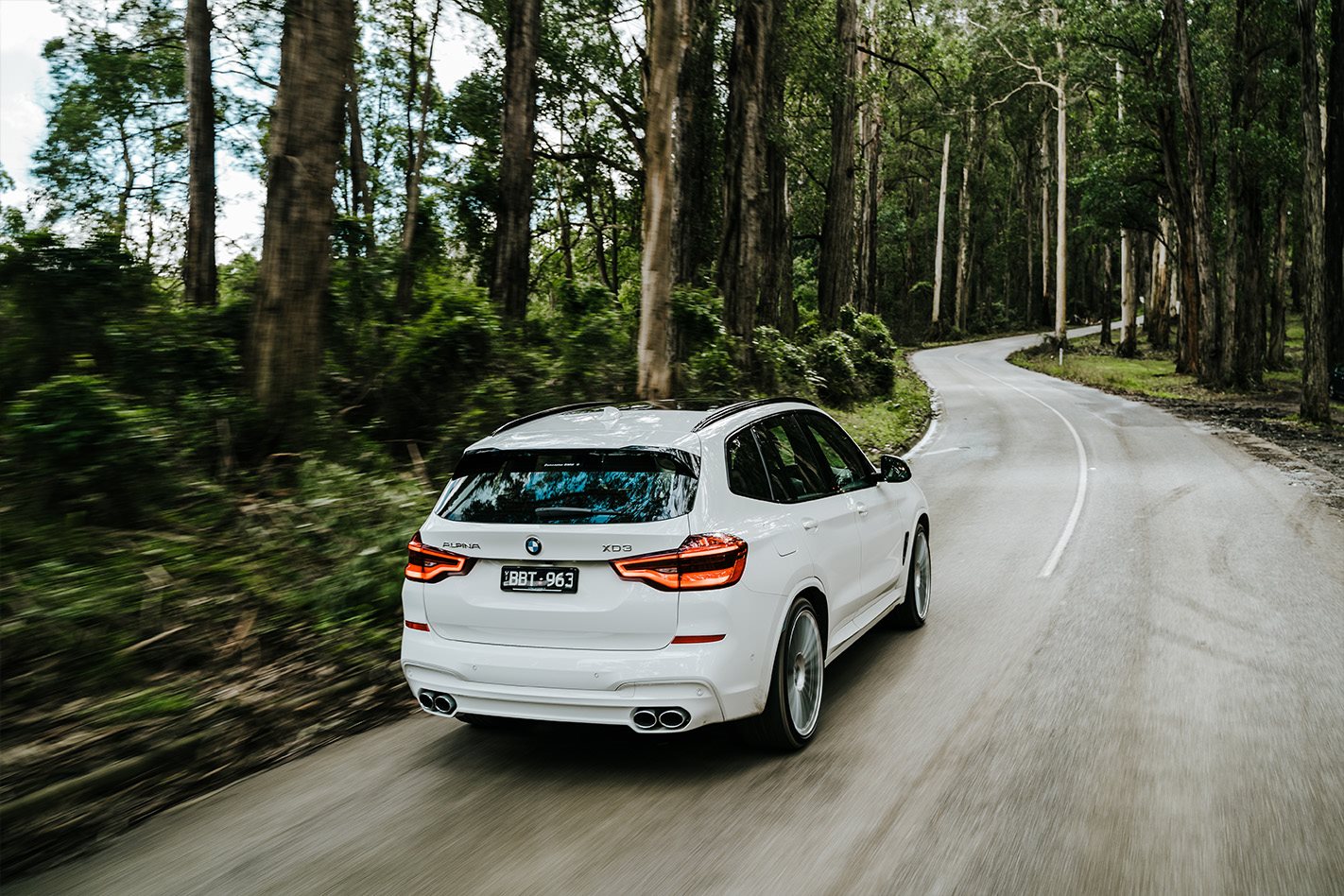 What doesn’t is the Alpina instrument cluster, which isn’t any great improvement over the BMW item, while the steering wheel-mounted shift buttons are an Alpina tradition but an ergonomic failure. It’s also strange to fit a Harmon Kardon sound system and not get crisp digital radio. Although we've been informed that DAB is now standard for all XD3s despite not being fitted to our test car.

The pragmatic-performance ethos is accounted for with a capacious 550L boot (which expands to 1600L with the 40/20/40-split rear seats folded), while there’s ample room for adults to sit comfortably in the back. Tri-zone climate control is an added bonus, especially with the huge panoramic glass sunroof, while the ambient lighting brings the cabin to life at night with selectable colours.

The 3.0-litre straight-six oiler is an impressive unit and endears itself in a way any diesel worth its weight should – via its mountainous torque. That’s 700Nm from just 1750rpm to be exact. Alpina has bolted two turbos down the driver’s side of the common-rail engine to afford 245kW (4000-6000rpm). Thanks to the stonking Newton count and tuned ZF eight-speed auto, the 2015kg XD3 can hustle to 100km/h in 4.9 seconds (with launch control). That’s just a tenth slower than the X3 M40i, but the Alpina can return 6.4L/100km on a combined cycle. 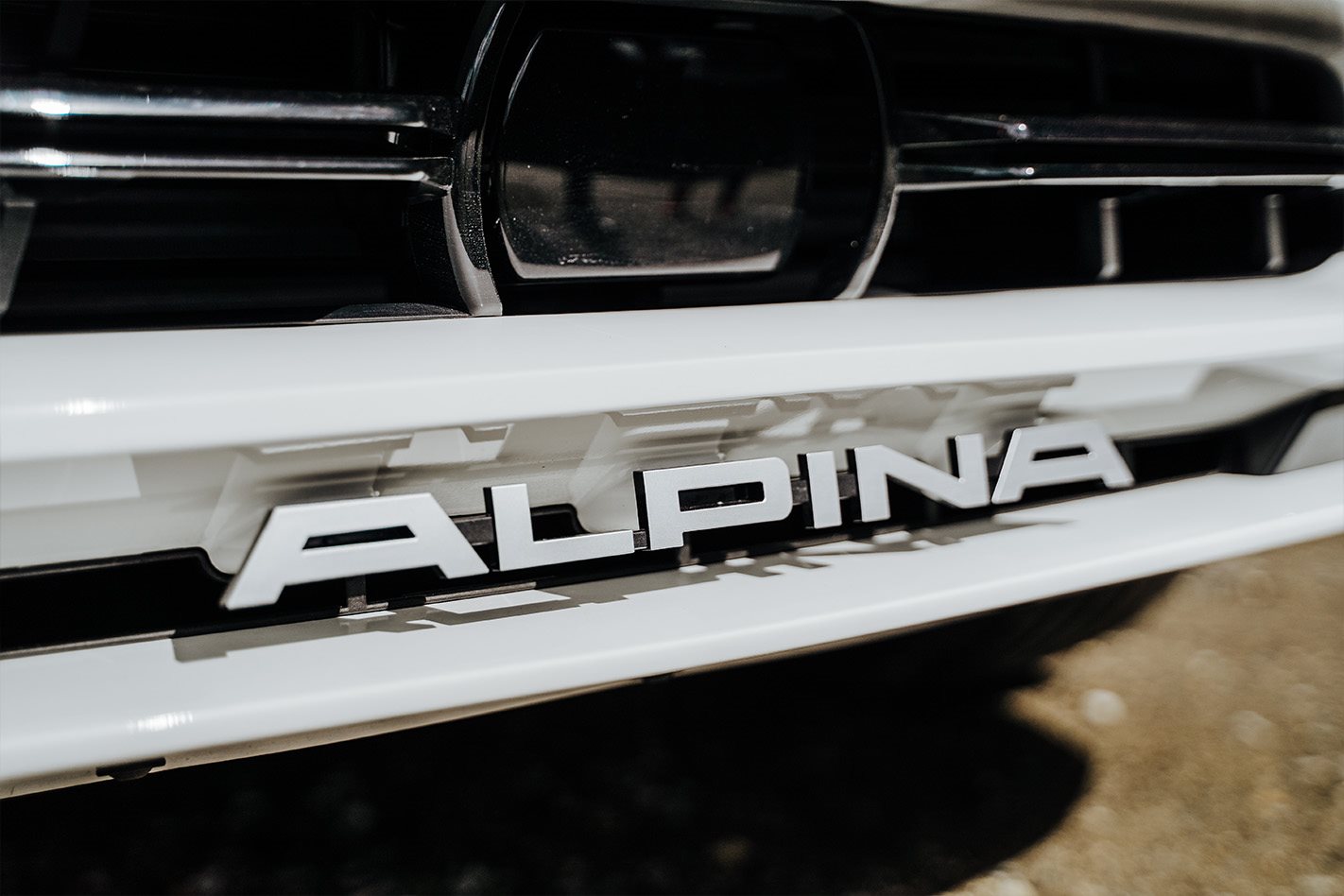 The ample, relaxing torque and supple ride quality combine to make the XD3 feel like a true luxury experience. Alpina has masterminded its own suspension setup, but how it has managed to get such compliance from an SUV riding on 22-inch wheels and skinny-profiled Pirelli P Zero rubber is deeply impressive. And there’s little NVH to speak of at highway speeds, either.

Initial answers can be found in the drive modes, where you’ll find not only Comfort mode, but Comfort Plus. This Alpina-specific tune is wonderfully cosseting, with a pleasing sophistication to its damping, and it’s the default for long journeys. However, switching to Comfort for the dampers is preferable to sharpen body movement, while Sport Plus is best left alone as it doesn’t really fit with the XD3’s undemanding persona. 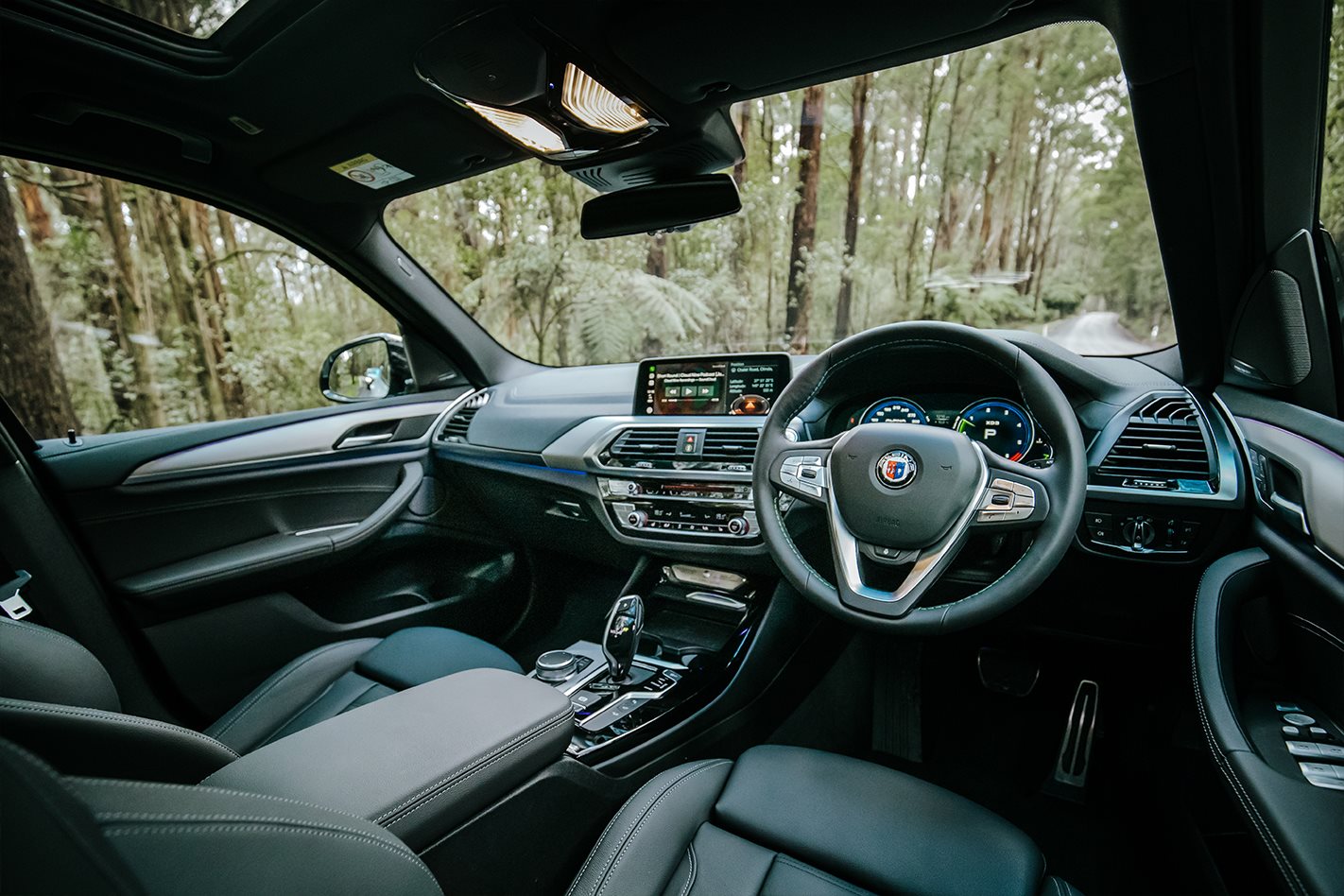 Handling is up to the X3’s high standards. The all-wheel drive system is rear biased and there’s an electronically controlled active limited-slip diff on the rear axle. Grip isn’t an issue, especially with 295-section rear boots, and the overall dynamic balance is remarkable for an SUV. The steering is definitely best left in Comfort mode as Sport Plus just adds unwanted artificial weight.

READ NEXT: Speed limiters "will hurt every fast-car manufacturer"

Ultimately you’re not just paying for the exclusivity or uniqueness. There’s genuine mechanical, comfort and design benefits with choosing the XD3 over its donor BMW. Unlike some Alpina models, you’re not choosing it just for the sake of being unique. 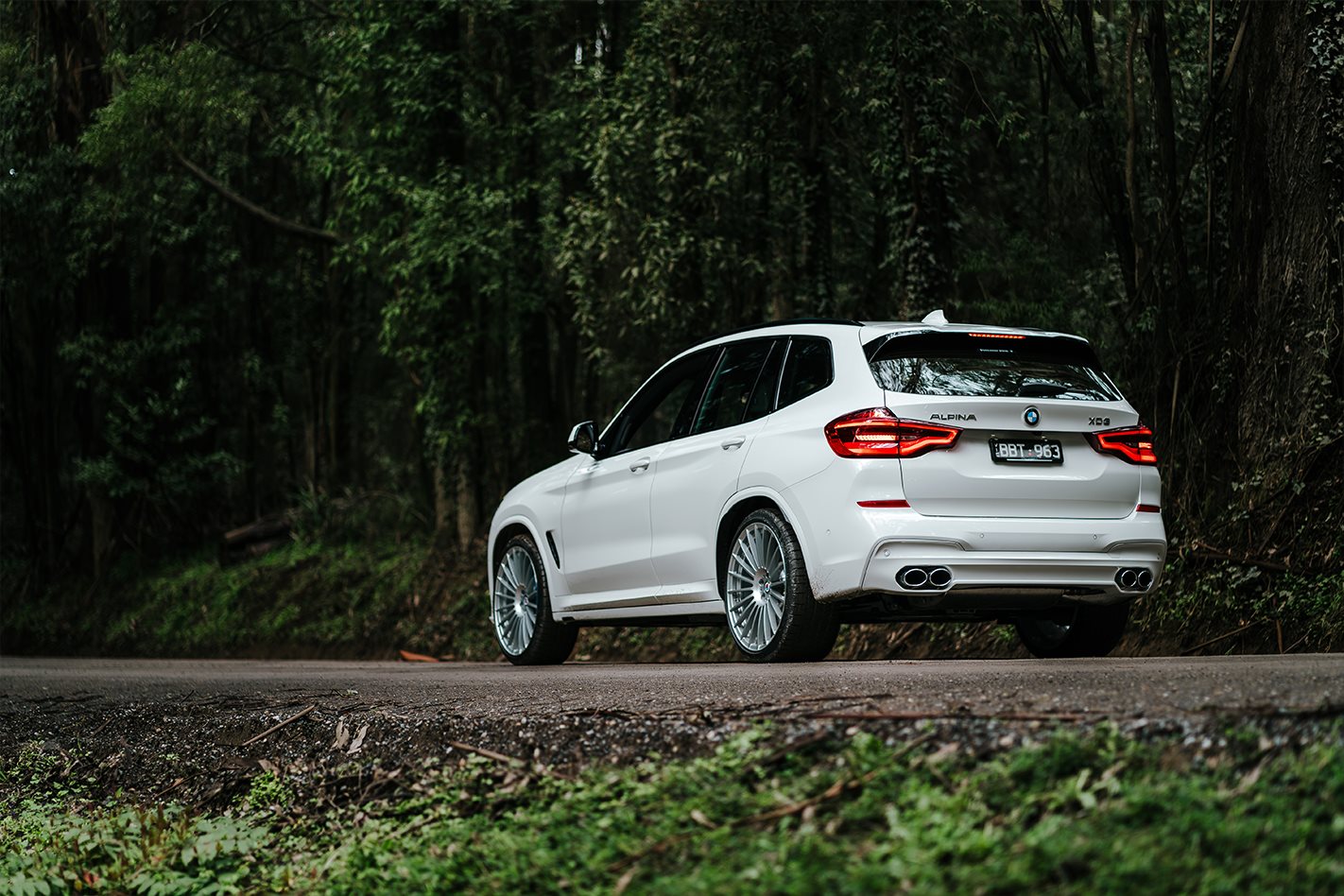 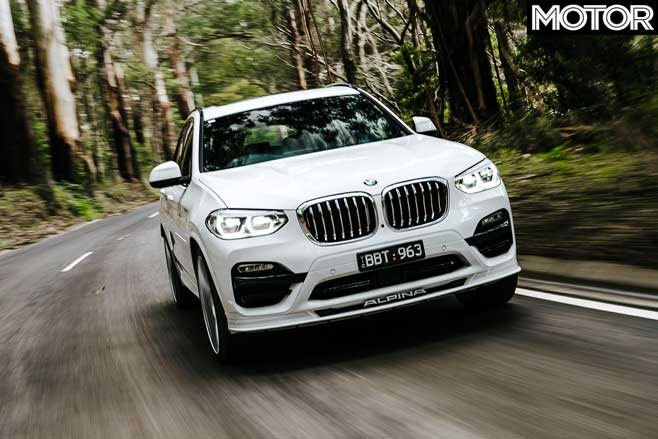 Having served up a number of appetisers to the Australian market, Alpina has now prepared its main course, the XD3 SUV.

Like most appetisers, its early offerings – a variety of sports-luxury sedans, wagons and coupes – were an acquired taste and very expensive, an unavoidable consequence of low-volume importing. The XD3 is a very different proposition. It's competitively priced, starting at $109,900, lands in the extremely popular mid-size performance SUV segment and yet fills a niche ignored by all the main players – yes, such a thing does still exist.

The previous Audi SQ5 proved the popularity of the performance diesel SUV concept, but contenders are few and far between, providing a neat gap for the XD3 and its 245kW/700Nm 3.0-litre twin-turbo six-cylinder diesel to drive into. Left-hand drive markets score a 286kW/900Nm quad-turbo monster good for 0-100km/h in 4.6sec, but right-hook territories sacrifice a pair of snails and 0.3sec. 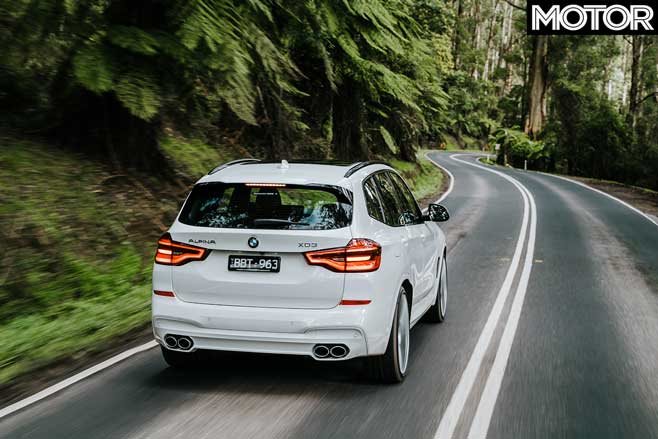 While it would be nice to have access to the full gamut of grunt, it's not really missed. It's a fine engine, with response, smoothness and a spread of power not often found in a diesel. There's a useable powerband from around 2000-4500rpm and the huge torque means it doesn't really matter if you're in third, fourth or fifth gear exiting a corner, the resultant acceleration is roughly the same. It's not going to pin your head back, but gathers pace at an impressive lick nonetheless.

Unsurprisingly, the XD3 handles very similarly to its BMW brethren, but then there wasn't much point Alpina toiling away on something that didn't need improving. It's tall and heavy but Pirelli P Zeros measuring 255mm and 295mm-wide front to rear respectively ensure decent purchase and adopting a slow-in, fast-out approach even opens a window to some gentle oversteer on slippery surfaces.

The XD3's true strength, however, is in everyday motoring. Its trump card is its fuel economy: the official combined claim is just 6.4L/100km and even driving like motoring journalists we couldn't push it above 9.6L/100km. Generally the ride is very good, but those giant (and stunning) 22-inch wheels do like to transmit sharp edges; the standard 20s would undoubtedly improve matters but the bigger wheels look so good... 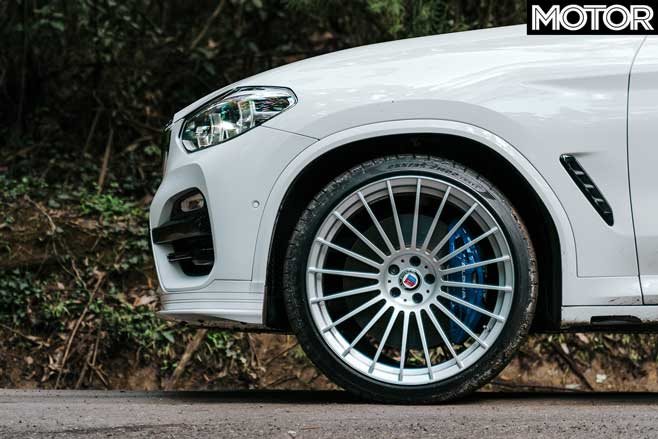 Inside it's pretty much standard X3, though to my tastes the Alpina digital instruments are more attractive and the thinner steering wheel is much nicer to hold. In summary, the XD3 is a nice car, but tricky to assess from a MOTOR perspective – will anyone actually ever want to take it for a spirited drive?

Unlikely. As such, the $25K cheaper X3 30d makes more sense, but for those who like the idea of an X3 but want something a little quicker and more exclusive, dinner is served. 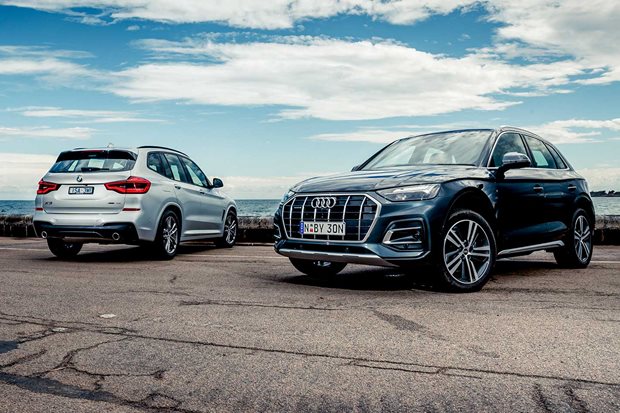 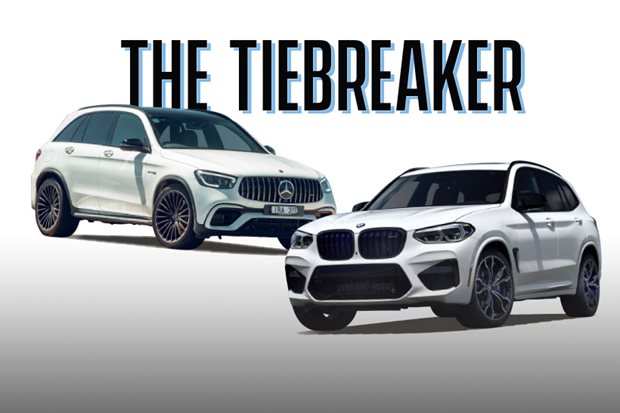