We ride shotgun as the AMG GT R tackles its spiritual home.

THE motor industry might adore the Nurburging, but the feeling isn’t universal. In recent years the  Nordschliefe – basically the old circuit – has becomes the ultimate playground for chassis engineers, and the place where the laptimes that are increasingly used to establish bragging rights in performance car segments are set.

Yet it’s worth remembering the Nordschliefe was widely hated by those who had to race on it during its later years of top-flight competition, when Formula 1 cars had become far too fast for its minimal safety. This is where Niki Lauda had the fiery crash that scarred him for life, and which Jackie Stewart detested so much he coined the phrase ‘Green Hell’ to describe what it was like to drive there. His description was subsequently claimed by the circuit’s fans, making it both appropriate and slightly ironic that the AMG GT R that brings me here is finished in the streaking frog shade of green known officially as Green Hell Magno. I hope Sir Jackie is getting a fee. 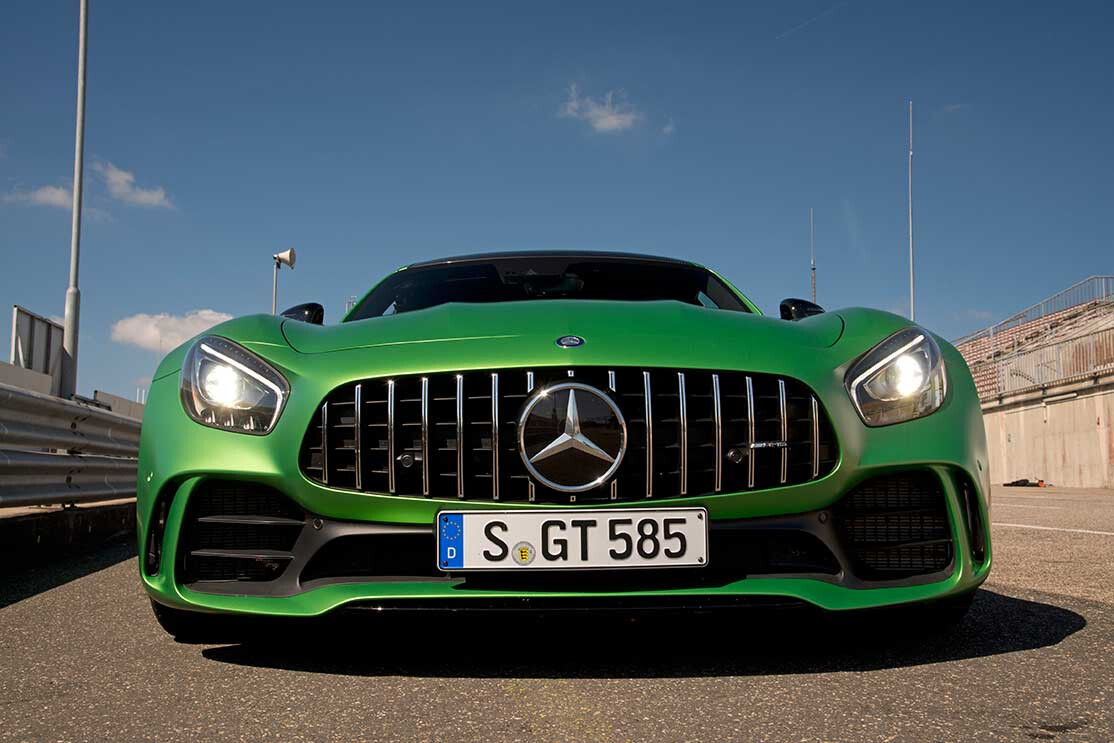 While we’re more than 300km from AMG’s HQ in Affalterbach, this is definitely the R’s spiritual home. It was developed here and will shortly be sent out to set a lap time that, if everything goes to plan, will make it the fastest ever road-going Benz to lap the place. Before that happens, though, it’s going to be used to give a taste of what it’s capable to some journalists, with me among the lucky victims.

High speed passenger rides like these usually operate along the same principal as rollercoasters: lots of thrills but with a well-trained professional in the hot seat meaning little chance of spills. But the Nordschliefe adds a definite edge to proceedings; even the best crash here. I visit only a couple of months after a Koenigsegg One:1 had a very heavy off when rehearsing for its own record attempt. An inspection of the barriers on the section of track next to the pitlane confirms that Armco rarely has a chance to get old round here.

Former DTM racer and Nordschliefe specialist Thomas Jaeger is going to be driving, and the plan is for him to introduce me to the GT R’s various dynamic systems as we do our allotted two laps. It’s a nice idea, although not a very realistic one in the absence of an intercom. Even as we rumble onto the track the combination of the AMG’s outrageous exhaust note and helmet padding makes communication beyond thumbs-up pretty much impossible. Jaeger puts in a couple of big steering inputs before we reach the first turn, seemingly checking everything is pointing straight, and then drops the hammer. First impressions are of the sheer force of the acceleration that the GT R delivers, and how angry it sounds at the top of its rev range. Second impressions, arriving just seconds later, are of the lurching severity of the negative G-forces it can generate under braking, and to wonder whether lunch was such a good idea.

This definitely isn’t going to be a blow-by-blow account of how the GT R deals with each of the Nordschliefe’s corners. Other than “bloody quickly” I couldn’t get more detailed; it’s a sensory overload. Watching Jaeger work is mesmerising enough, he’s wrestling the big Benz into the slower corners with some surprisingly jagged steering inputs, his right hand flicking occasionally to the rotary switch that controls the variable traction control in search of the optimum setting for different parts of the track.

The video games that have featured the Nordschliefe give a good idea of the shape of the track and the order of the corners, but – like Bathurst – they give little preparation for just how three-dimensional it feels in real life. Or, indeed, how close the barriers feel in the faster sections. It’s not just up-and-down, this has to be one of the bumpiest tracks in the world – mid-way through the first lap I see that Jaeger has turned the GT R’s dampers to their slightly softer “Sport” setting, Sport Plus being too firm. 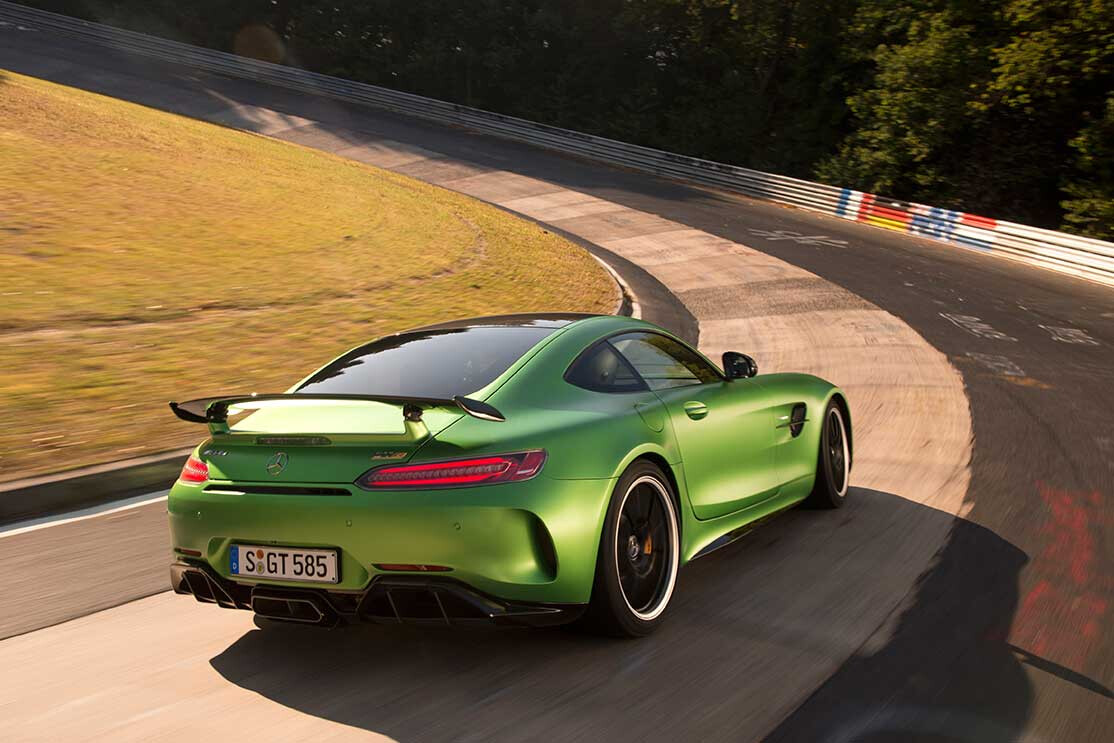 The thing that really impresses from the passenger seat is the way the AMG copes with those parts of the circuit where digesting rises at such speed makes it either go light or – in the case of the famous Pflanzgarten – to leave the ground. There’s the unmistakable weightless sensation of the car catching air before we return to terra firma and scream around the next corner.

Having two laps and a stopwatch function on my watch also means I get to run some unofficial timing to see how hard Jaeger is pushing. Timing from the bridge on the long Dottinger Hohe straight rather than the official start-finish gives a full flying lap, and I hit “stop” to reveal a time of 7:46; easily the fastest I’ve been around the Nordschliefe and not bad considering the ballast being carried in the passenger seat.

Back in the pits, there’s the chance for a quick debrief. How hard was Jaeger pushing? “You always leave something when you do things like this, especially under braking.” He also singles the rear steering out for particular praise – “when we were developing the car we could turn it on and off; you feel a massive difference.” Jaeger reckons that a max-speed lap would be between 20 and 25 seconds faster, putting the GT R close to, if not faster than, the 7:20 that Porsche claims for the Porsche 911 GT3 RS.