AMG reveals its newest and most advanced weapon, but Wheels saw it weeks ago. We even scored a private tour by the company’s boss.

TOBIAS Moers – the muscular, forceful and slightly intimidating boss of AMG – is standing next a car covered in a silver cloth, a boyish grin spread wide across his broad, freshly shaven face.

We’re deep inside AMG’s Affalterbach HQ, in a private showing room, and under the cover lurks the hulking shape of the performance company’s latest and greatest creation – the track-focused GT R, a clear rival for the Porsche 911 GT3. 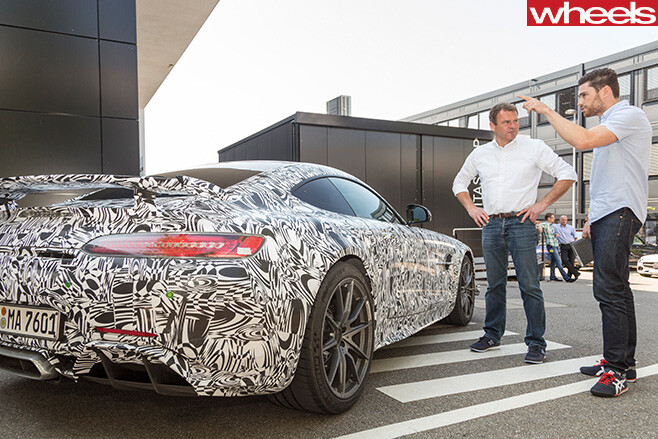 The car will officially be unveiled at this weekend’s Goodwood Festival of Speed, but right now, as Tobias grips the silver cover and rips it off with a flourish, that event is more than a month away.

“Here it is!” Moers proclaims. He’s like a proud father and I can see why as I drink in the GT R’s angular shape, its lower and wider bodywork, manually adjustable rear wing and brilliant green hue. “There’s active aero, four-wheel steering, and the next level in what we can offer in terms of suspension and handling,” he says.

Before we get to all that, though, let’s talk about power.

The GT R uses the same 4.0-litre twin-turbo V8 as the regular GT S we get here in Oz, but AMG’s engine experts have fitted bigger turbos and injected more boost to push outputs to 430kW/700Nm.

That’s an improvement of 55kW/50Nm over the already very fast GT S. 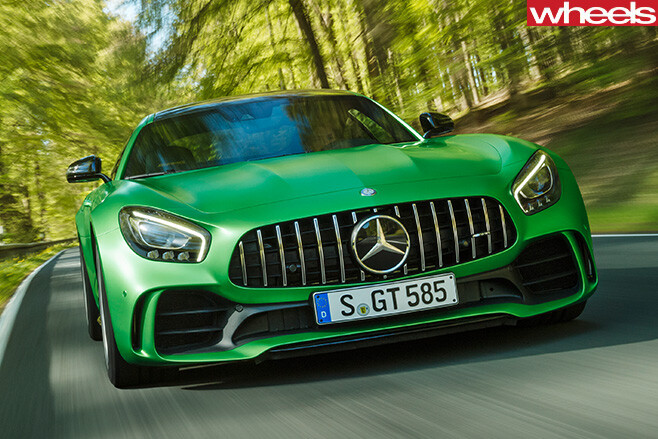 All that grunt is sent to the rear wheels via the same seven-speed dual-clutch transmission as the regular GT, only the GT R scores different ratios and a shorter final drive.

Combine this with super-sticky Michelin Pilot Sport Cup 2 tyres, which measure 325/30R20 on the rear axle (“That’s the same profile as the SLS Black Series,” says Moers) and the GT R will rocket from rest to 100km/h in 3.6sec, two-tenths quicker than the GT S.

Impressive numbers, then, but Moers points out the GT R isn’t really about raw power and straight-line performance. It’s more about ruining your internal organs through the corners.

Moers claims the GT R will lap the Nurburgring in 7min 20sec, which will put it, rather awkwardly, in the same league as Nissan’s GT-R.

AMG honed the GT R’s handling package extensively at the ’Ring – hence the brilliant green paint, called Green Hell Magno – and Moers himself did some of the driving.

“You can really feel the four-wheel steering working, and it’s great,” he says. “It adds much more stability.” 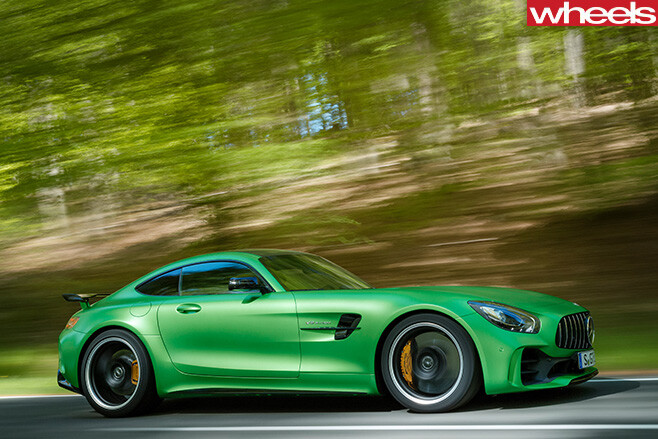 The system is electrically operated, and at speeds below 100km/h turns the rear wheels in the opposite direction to the fronts for greater agility. Above three figures, the rears move in the same direction by up to 1.5 degrees.

AMG has tweaked the onboard electronics, the headline change being a nine-way adjustable traction control system developed for racing. It’s operated via a rotating dial placed in the centre of the dash and lets the driver choose how much slip you'd like from the rear axle.

And that aggressive bodywork isn’t just for looks – it’s functional, too.

Special carbonfibre flaps hidden behind the front splitter lower by 40mm at speeds above 80km/h to create a venturi effect (anyone familiar with ground effects in F1 will know this term) to suck the GT R into the road. The bodywork is wider front and rear, by 46 and 57mm respectively, and an even more aggressive double-diffuser is housed in a tweaked rear apron, which now sports a new vent for improved ventilation.

There are three exhausts; in Comfort and Sport all of the noise is sent through the large central opening, but dial in Sport+ or Race and flaps open to active two extra pipes set wider in the rear bumper.

“It’s louder than the GT S, but also has a more distinct note,” says Moers. 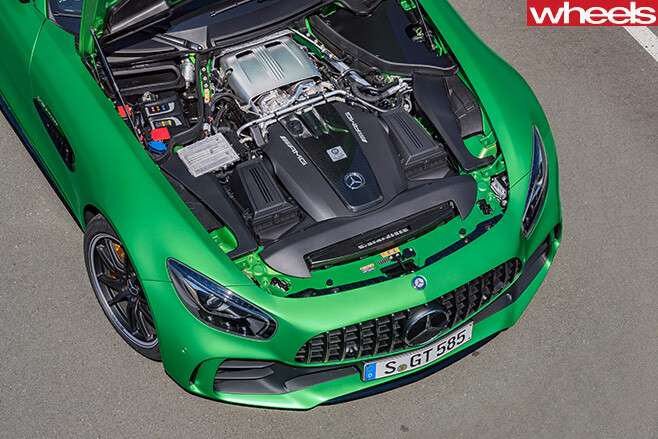 The rear spoiler is different, too, and can be manually adjusted, just like AMG’s GT3 racing car, to suit different race tracks.

All up, AMG claims the GT R generates 155kg more downforce than the regular GT S.

As you’d expect, lightweight carbonfibre features throughout – it’s in the front fenders and the torque tube (itself 40 percent lighter than the aluminium one in the standard GT) – but overall weight hasn’t actually dropped that much.

“The goal was to be lighter and we have taken lots of weight out, but we’ve also added heavier items like the four-wheel steering and active aero.” Under the body, the suspension is all-new and combines adjustable coil-overs with adaptive dampers to offer a much more aggressive set-up.

“We’ve changed everything,” says Moers. “Even the steering is different. It’s more direct and has a faster rack. But it doesn’t feel nervous because of the rear-wheel steering. We can afford to make it faster because the GT R is so stable at high speed.”

Great news is the GT R’s suspension geometry will soon make its way into the rest of the GT range.

So what about price? Mercedes-Benz Australia isn’t saying, but expect a sticker of $350-400K, which should put it on the shopping list of anyone considering a 911 GT3 RS.

We can’t wait to find out which is better.