Allroad version of A4 Avant wagon will debut Audi’s newest quattro all-wheel-drive system and come with a choice of engines when it arrives in September.

WHAT IS IT?
All-wheel-drive family wagon with extra ground clearance and look-tough visuals; same idea as the Subaru Liberty Outback, Škoda Octavia Scout, and VW’s Golf and Passat Alltrack wagons.

WHY WE’RE TESTING IT
Is a wagon with useful altitude a smarter choice than an SUV with perceived attitude? THE WHEELS VERDICT
Audi’s latest B9 generation A4 lifts Ingolstadt’s medium-size mainstay to new heights. The A4 Allroad quattro adds another 34mm…

THE WHEELS REVIEW
Audi’s new A4 Allroad quattro makes the company’s own Q5 seem flabby, slow and inefficient. Comparing versions of the raised all-wheel-drive wagon and SUV – both powered by a turbo 2.0-litre petrol four  – highlights the Audi Q5’s shortcomings. It’s 180kg heavier, takes the best part of a second longer to accelerate from standstill to 100km/h, and burns around a litre more fuel every 100km. Yet none of these things deter Australians, apparently. In 2015 Audi’s hugely popular medium-size SUV outsold the outgoing version of its high-clearance all-wheel-drive wagon by better than 20 to one.

The arrival of a new A4 Allroad quattro in September could alter this appalling ratio a little. Like other members of the latest B9 generation of the A4, it’s built on Audi’s MLB Evo architecture. While the soon-to-be-obsolete B8 version of the A4 Allroad is imported only with a 2.0-litre turbo diesel engine, Audi will offer customers a choice with the new model.

The 140kW 2.0-litre turbo diesel of the outgoing A4 Allroad will be joined by a 185kW turbo 2.0-litre petrol-burner. Both are teamed with Audi’s S-tronic seven-speed double-clutch auto and quattro all-wheel-drive. But while both wear identical quattro badges on their tailgates, there are big differences in system hardware. 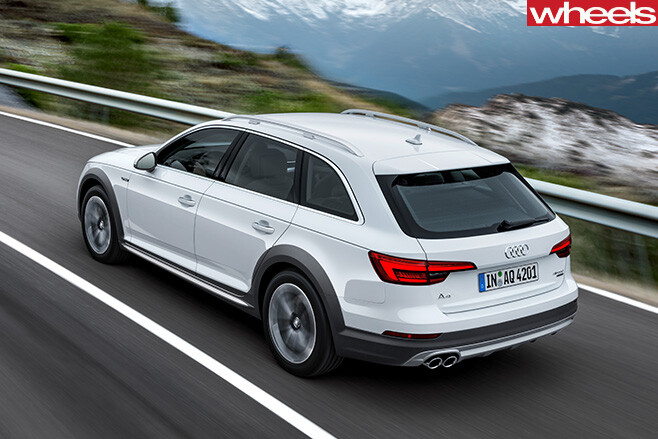 While the A4 2.0 TDI Allroad’s quattro is essentially carried over from the outgoing model, the A4 2.0 TFSI Allroad debuts something new. Audi calls it, clumsily, “quattro with ultra technology”. The key change is the replacement of the previous-gen quattro’s centre differential with an electronically controlled clutch pack. There’s a second clutch, installed on the rear differential’s input shaft. This means the propshaft running down the car’s centreline can be isolated.

This spells is a reduction in drag in driving conditions when quattro traction isn’t needed. During straight-line cruising on dry bitumen, for example, the 2.0 TFSI Allroad drives only the front wheels, while the rear wheels spin only their axle half shafts.

It appears “ultra technology” is effective. Comparing the 2.0 TFSI Allroad quattro to an A4 Avant wagon with the same engine and transmission, there’s little difference in performance and consumption. Our brief drive of the new 2.0 TFSI Allroad quattro wasn’t long enough to fully analyse its upgraded all-wheel-drive tech. But what was obvious on Bavarian backroads and autobahns was that the Allroad loses none of the things that make the new A4 Avant so likeable. The interior is spacious and beautifully crafted, the level of electronic tech – driver aid and infotainment – is impressive, refinement and ride comfort outstanding.

Best of all, the A4 2.0 TFSI Allroad quattro’s unique selling proposition – its extra 34mm of ground clearance – has little effect on handling. Which means, obviously, that it’s a better drive than its Q5 equivalent.

Audi Australia aims to price the new A4 Allroad quattro models around $75,000, around $2000 more than an A4 2.0 TFSI Avant quattro. Sounds like a reasonable premium, but price is one reason so many Australians prefer the Q5 instead. Four-cylinder versions of the SUV cost around $10,000 less than their Allroad equivalents.