It’s generally regarded as a sensible, useable supercar. It’s been Motor’s Performance Car of the Year. And now it’s all new. Well, sort of.

See, the 2016 Audi R8 has a new, lighter, stronger structure with plenty of carbon-fibre, a new interior and a new-ish look. But underneath all that newness beats the heart of the previous model R8, albeit with a few tweaks to bring it up to date. If, that is, you can call one of the passenger-car planet’s last big-inch atmo engines a modern interpretation of anything.

In any case, MOTOR got to sample the new R8 recently, although, sadly, there was no on-road component and really just the greasy (it was about 34-ambient) South Circuit at Sydney Motorsport Park from which to draw a conclusion. Which kind of means we haven’t (drawn a real conclusion). Yet. Also, we only got to drive the V10 Plus model which means we’re yet to even sit in the more modestly priced (stay with me) V10 with its 397kW/540Nm version of the 5.2-litre on-loan-from-Lambo V10 lump. Then again, anybody in our position would have opted for the V10 Plus model with its retuned V10 making for 449kW and 560Nm.

So that’s okay, then. Even more so because the Plus version gets carbon-ceramic brakes (a $20,300 option on the lesser model) tighter suspension and 20-inch alloys as well as a range of trim fluff.

If anything, the new R8 is even more complicated than before with a range of driver modes, all selectable via switches and buttons on the flat-bottomed tiller. But there has also been a worthwhile upgrade to the Quattro system including a water-cooled, electro-hydraulic centre diff and the ability to shuffle 100 per cent of the torque front or rear. 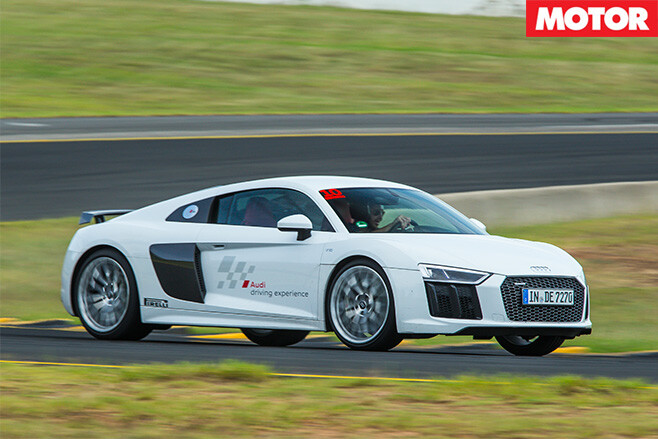 It certainly shifts when you plant the boot and, when nobody important was looking, we gave the Plus a slap up to 100km/h to test Audi’s claim of 3.2 seconds. And it holds up with our slightly uphill, two-up run netting 3.5. That V10 still makes a wonderful noise, too, with a low growl that rises to a hysterical yammer as the thing approaches its 8700rpm redline.

But even more impressive is that tweaked Quattro set-up which seems to make the car rotate much more willingly. There’s a surprising amount of leeway afforded by the ESP, too, but provided you don’t completely screw the pooch, there’s a fair chance you’re going to come out the other side of the corner intact. 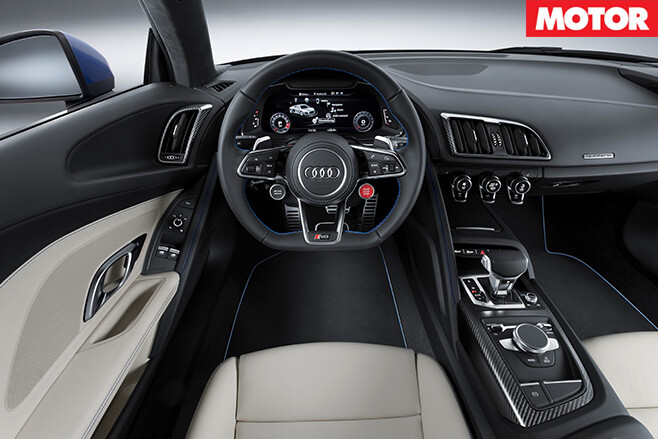 The other R8 attributes remains, of course. All that sophistication, technology, ergonomic purity (boosted by Audi’s clever virtual dashboard) and the feeling that you’re in something pretty special. The loss of that lovely gated manual tranny is a blow (it’s now seven-speed DSG or nothing) but clearly consistent with where the world is taking the motor-car. Even if there’s not a turbocharger to be seen.