You don’t learn a lot about a car’s real-world driveability on slick roads and frozen lakes.

Unless you live in Sweden, that is, where Audi chose to launch its segment-busting S1 hyper-hatch. It brought along an original S1, too, and a bloke named Stig to drive it.
What you can discover, given dozens of square kilometres of flat ice and mounds of fluffy, knee-high white powder, is how much fun the Neu-S1 is.

On appearances alone, it’s easy to doubt the S1’s ability. Despite gorgeous black 18s, a black hardtop, black roof spoiler and toughened front and rear fascias, the S1 struggles to escape its slightly cutesy A1 mould in either Euro three-door or Sportback five-door styles, the only body style due to land in Oz. 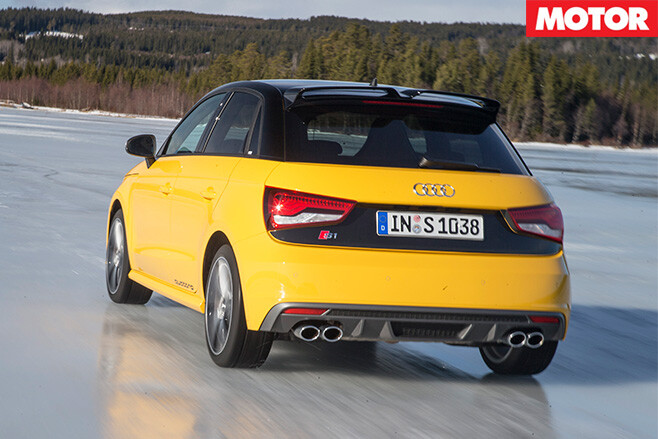 The S1’s 2.0-litre turbo engine and all-wheel traction is unheard of in a segment weaned on 1.4- to 1.6-litre motivation and front-wheel drive. The tangible effect of the over-sized mechanical package is satisfying and grin-inducing.

Pin the throttle and the studded snow tyres scramble in vain for traction on frosted open-road tarmac anywhere from standing starts to around 80km/h. It’ll squirm and sway within a broad ESP window, with the engine feeling robust in delivery. It will pull hard in tall gears from modest rpm in a way that a WRX – the only other serious 2.0-litre turbo, all-paw prospect under $50K – struggles to match.

This is the same dual-injected engine fitted to the S3, albeit with a smaller turbo and yielding a far more modest 170kW compared to the S3’s 221kW. Driving the S1 back-to-back with an S3 Cabriolet reveals just how soft-tuned the smaller car’s engine is, but while it lacks the snap and fizz of the rag-top, the motor feels like a big, under-tasked, gutsy unit in such a small chassis. What it lacks in the S3’s outright potential, it makes up for with a broad 370Nm and consummate tractability.

Audi reckons the three-door version will march to 100km/h from a standstill in 5.8sec, with the five-door version just 0.1sec slower. So the S1 is about half-a-second slower than the pricier S3 hatchbacks. Top speed is a predictably European 250km/h, while combined fuel consumption is a decent 7.0L/100km for the S1 (7.1L for the S1 Sportback).

Audi’s super-mini is clearly not about kissing nature, more about spitting it out the back and washing it off after a red-misted punt. The multi-link rear suspension – another rarity in the compact hatch segment – is a slightly narrowed, S3-derived system. The Haldex-type, hydraulic multi-plate clutch is mounted at the rear axle, transaxle style, to even up the front-to-rear weight distribution, while an electronic rear diff lock is integral to the ESC system, which controls torque across the rear axle and has two-stage deactivation.

Like the S3 – but unlike the new third-gen TT – the static 60:40 front bias quattro system can only shuffle 50 per cent of torque rearward. And while oversteer dramatics are easy in this environment, it remains to be seen how understeery the S1 package might be on grippy road surfaces.

The steering is light, clear and eager off-centre. Studded tyres aside, there’s an impressive amount of front end purchase on ice. The slippery, hard lake surface also amplifies chassis prowess and the S1 displays the kind of inherent balance and adjustability that allows you to steer the rear easily and confidently using mostly the brakes and throttle. 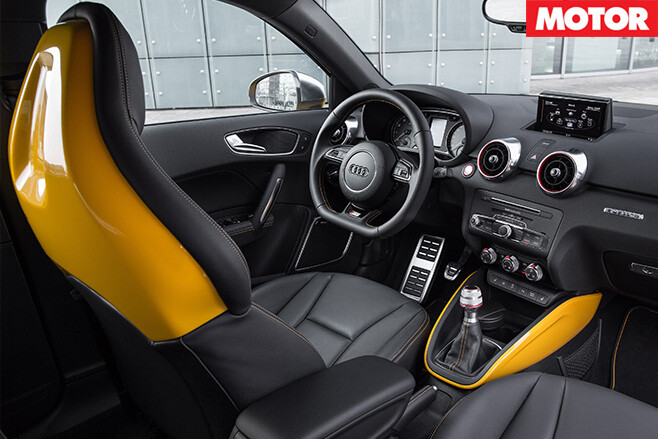 You can fish tail the hatch in and out of switchbacks with precision, nudging snow banks with laughably heroic four-wheel power slides. Fun? Here at least, it’s an absolute blast.

It’s available as a six-speed manual only, which is slick and precise. Why no self-shifter? Audi reckons it’s less to do with driving purity and more to do with weight balance, as the quicker shifting S-Tronic twin-clutch ’box, which would fit, is heavier over the front axle.

While the S1 certainly chalks up plenty of brattiness, it’s still a nicely-behaved, well-made and refined device. The cabin gets a tasty blackout treatment, “grey-scale” instrumentation, up-spec sports seats and feels a cut above your average A1 fare.

‘Xenon-plus’ headlights, LED tail-lights, stainless-steel capped pedals – there’s plenty of devil in the details. This is what you’d expect from a compact hatch that will nudge $50K when it lands in Oz (in five-door Sportback form only) around August. 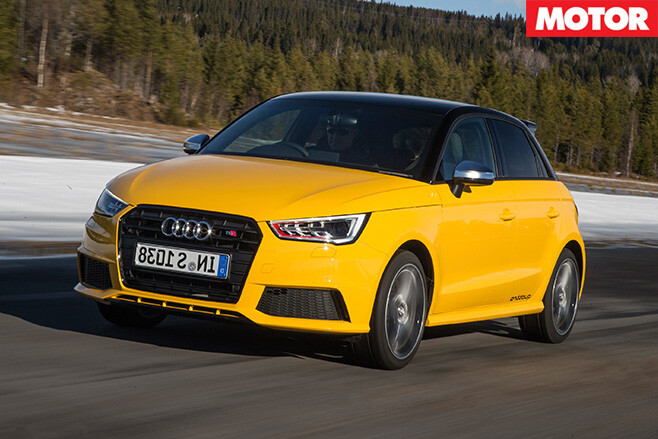 There’s ample desirability here, in that there’s nothing else out there quite like it. You might get the agility and fun factor to match with a Fiesta ST, but the Ford is neither as mature and refined, or as bonkers.

Polo GTI? Forget it. Volkswagen would have to stuff Golf R running gear inside that compact shell for it to become a worthy combatant.