Audi’s fastest seven-seater puts a different spin on the top end of the luxury SUV market.

WHAT IS IT?
The high performance flagship of the Audi Q7 range and the quickest accelerating diesel SUV. Unlike some potential rivals, which use petrol-fuelled V8 engines, the SQ7 uses a V8 diesel.

WHY WE’RE TESTING IT
The SQ7 is the first production car with an electric turbocharger, designed to eliminate turbo lag and boost performance. As we loved the regular Audi Q7 in our 2016 Car of the Year testing, we wanted to see if it lives up to its promise.

MAIN RIVALS
BMW X5 M50d and Porsche Cayenne S Diesel are the most obvious. But some will no doubt cross-shop petrol models, including the BMW X5 M and Mercedes-AMG GLE. THE WHEELS VERDICT
It’s not as fiery as the fastest luxury off-roaders out there, but it’s brisk enough and brings a wonderful driveability to the go-fast SUV equation. It’s a bold move to make a diesel your performance flagship, but the execution is excellent, making for a tantalising addition to an increasingly busy segment.

THE WHEELS REVIEW
Motorway cruising in eighth gear is the best way to experience the effortlessness and newfound flexibility of Audi's new SQ7, the fastest seven-seat SUV the company has ever produced. 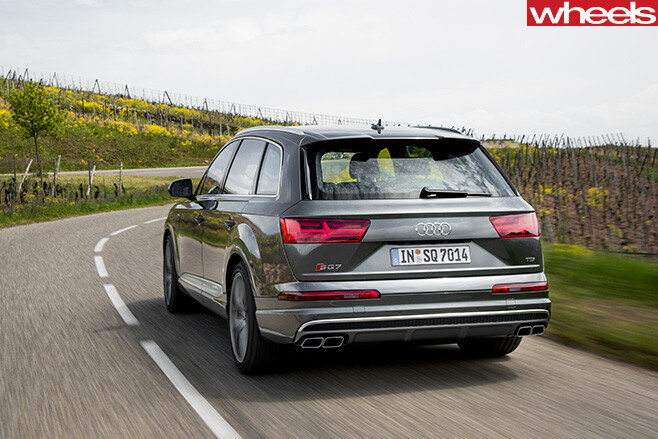 The first production car with an electric turbo - or, more correctly, an electric compressor, which amounts to a 7kW, 70,000rpm air pump - puts its full 900Nm to use with even a gentle squeeze of your right hoof, barely flustered at the prospect of building pace beyond triple figures.

Not even 2330kg of aluminium and steel can make the 4.0-litre twin turbo V8 diesel lumber.

It's a seriously smooth engine, too, with a mild V8 rumble courtesy of the sound actuator tucked in the quad-pipe exhaust system. Pity those inside don't get the full bark that characterises the Q7 range-topper from outside. Yet for most driving the headline act of the SQ7 - its electric compressor - lays idle, handing over to the two exhaust driven turbos that provide ample huff. Little wonder, then, that in most situations most of the time the SQ7 isn't radically different to Audi's excellent V8 diesels we've experienced previously.

But there are subtle but noticeable improvements. Reapplying power out of a hairpin bend, for example, unleashes a luscious torrent of near-instant torque, making the blast to the next bend that fraction brisker. It's not Tesla-like in immediacy, but it's far better than any turbo diesel to date.

Where the SQ7 isn't as convincing is in a full throttle standing start take off. Depending on what setting you've got the Drive Mode selector, and whether you're in Sport or Drive, the big Audi still fumbles for a second before that brutal torque hit kicks in. And even the best stop-start systems - and the SQ7's is up there - will shade any turbo lag when it comes to delays in getting going, making the fuel-saving method redundant for those who may decide to turn it off for the sake of better response. 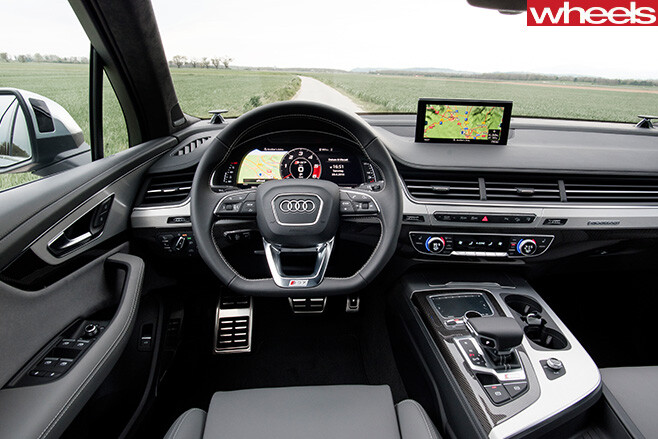 But Audi's latest go-fast SUV isn't a one trick pony, and it's arguably its dynamic smarts that separate it most from rivals.

The implementation of a second, 48-volt electrical sub-system (most of the standard electronics still use a 12V system) is reserved for items requiring plenty of power, such as the electric turbo. That also means the optional electromechanical roll stabilisation system. Working in tandem with the standard adjustable air suspension, it adds active stabiliser bars that decouple when more travel is required and stiffen when cornering.

The result is a car that is impressively supple in its bump absorption. Only sharp-edged lumps mildly fluster the low profile 22-inch tyres on our car. And body control is phenomenal. There's not an SUV around that matches the SQ7's talent in keeping passengers comfy and the driver smiling.

Torque vectoring helps quell understeer; pitch in hard and the big SUV does a fantastic job of pointing where you’re telling it. Our car was running on Hankook rubber, delivering a punchy full stop on a great dynamic equation. The optional carbon ceramic brake package delivers great feel and potent stopping power, too.

The SQ7 isn't as fiery as an AMG or M in a straight line, but it makes up for it with cornering nous few cars get close to. Plus, it's so relaxed, so refined and so comfortable that it eats up country miles with ease. And it brings new seven-seat athleticism to the point where it feels wasted to do anything but drive it hard.