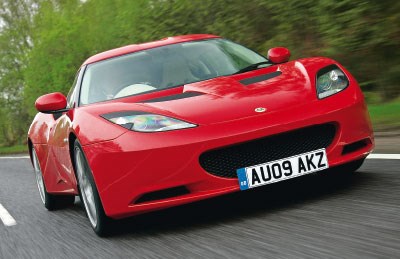 It's the Lotus built for touring, not just track days. But is the Evora enough to see the British sports-car maker blossom into a mainstream contender?

When you turn south from Scotland's busy A82 to give your car its head down the eastern side of Loch Fyne, there's a stirring combination of high-speed bends and varying surfaces which, taken fast enough, can test any car's stability, body control, steering accuracy and noise suppression.

Why noise suppression? Because the noise these coarse-surfaced roads generate can make driving unpleasant, even in good cars. These were my thoughts as I turned south in the Evora, the first all-new Lotus in 13 years.

Within a few minutes the matter was decided. I'm not saying how fast we went, but I saw the three change-up lights on the tacho a few times in high gears, and we encountered plenty of those characteristic patches of worn-out bitumen that, at speed in the wrong car, sound like a controlled explosion under your wheels. The Evora rode them as if developed for no other purpose, supremely in touch with the road's topography but shielded from the effects of its scabrous surface.

For a new Lotus, especially a A$150,000 model, this matters. We've known for half a century that Hethel can do class-leading roadholding and brilliant steering, and combine such things with perfect body control in soft-riding cars. But what it's not managed is refinement - and to this day that prevents many a Lotus owner from using the car for long journeys. The Evora changes everything. It has the traditional Lotus driving virtues, but now it stands ready to take you, a passenger and all the luggage you need, from Sydney to Adelaide in comfort.

Lotus makes much of the car's status as (currently) the world's only mid-engined two-plus-two, believing that the Evora's ability to carry a pair of 10-year-olds in the rear will make a big difference to sales. Actually, much larger adults can squeeze in there for short rides, too. But for the most part the rear compartment will probably provide easy space for jackets and briefcases, a big problem for less spacious cars with mid-mounted engines.

The Evora is a car Lotus engineers have wanted to build for years, because it answers one burning question: can the Elise's pioneering bonded aluminium 'tub' chassis, emulated nowadays by the likes of Aston Martin and Morgan, progress to even greater things? You feel the benefit of the car's improved rigidity with every kilometre you drive.

All of the Evora's running gear is from the top drawer, including the suspension (see breakout), hydraulically power-assisted steering rack by TRW and bespoke four-pot brake calipers by AP Racing. And all components get careful Lotus tuning.

Lightweight components are used all over the car (even the flat-bottomed steering wheel has magnesium innards), but the claimed kerb weight of 1382kg is no better than Porsche's steel-chassis Boxster S. That just shows how hard it is to contain weight in cars that must offer plush trim, lots of chassis electronics, sat-nav and a premium hi-fi.

Lotus makes much of its closeness to Toyota, once its part-owner and now the provider of the Evora's all-aluminium 3.5-litre V6. Hethel receives the V6 in a crate, but fits its own 32-bit engine management processor, changes its outputs and rev limits, fits a bespoke exhaust system and mates it to a six-speed manual gearbox (also by Toyota) which the maker doesn't even use with this engine. The result is stunning, and does much to underscore the Evora's efficiency. It emits just 205g/km of CO2, delivers 9.4L/100km on the combined cycle (and, more importantly, 8.7L/100km in real-world use) yet it can hit 260km/h flat out and sprint from 0-100km/h in about 5.0sec.

Open the door and you'll find none of the difficulty an Elise presents to entry. There's still a sill, but it's 20mm lower, while the hip point is a little higher. The thin but delicately contoured Recaro buckets are perfectly shaped, and there's plenty of headroom above and elbow space on either side.

The interior is leather-trimmed and the good quality of its materials is instantly obvious, though it lacks the perfection of Porsche in the fit of its panels and straightness of its edges. These are early cars, says Lotus.

There's none of the find-the-button routine of other cars: you just twist the key and it fires. There's a zing in the engine that is instantly un-Toyota, and a promising bark from behind. The clutch isn't heavy, but it bites with precision and the Evora moves away with the alacrity of an Elise. You have an instant impression of mid-range torque.

As the engine warms, you rapidly learn how easily the gearlever moves in its compact gate, how closely the six ratios are stacked, and how the induction rasp gets more serious above 4000rpm as the inlet tracts change length in favour of top-end power. The optional Sport button on the dash sharpens throttle response, lets you use an extra 400rpm (7000rpm against 6600) and tames intervention from the electronic diff and traction control, but the truth is that if you thumb it, even in the wet, all you'll feel are the engine effects. Riding on 18- and 19-inch Pirelli P Zeros, the Evora has reserves few drivers will fully explore.

Most owners will never need the standard chassis electronics (ABS, traction control, brake-force distribution, electronic diff), let alone the full ESP that is coming with the US-market Evora next year. Lotus set out to create a chassis so capable and intuitive that it just doesn't need help in any but the most extraordinary situations. The sweetly weighted steering has class-leading, razor sensitivity, especially at the straight-ahead.

How does the Evora behave at the limit? Well, its party trick is neat power oversteer in tighter curves, provided you remove all electronic aids. But the truth is, it just goes where you point it. You might taste a hint of understeer if you arrive hamfistedly fast and brake too late into a tight bend, but even then the wonderful brakes, bristling with feel and power, will probably wash away your excessive speed.

Despite the Evora's storming 0-100km/h time, the performance doesn't really come across as explosive. But it does seem relentless. The engine, which is as loud as legislation allows, builds thrust in partnership with a well-bred yowl from around 2800rpm, until it is giving its best beyond 4500rpm. The Sport button allows you 7200rpm momentarily, then 7000 thereafter. Without Sport, it cuts out 400rpm lower.

Bottom line? The Evora is instantly impressive. It's extremely quick, but it rewards smoothness and accuracy. New and different the Evora may be, but one immutable fact reigns above all. It's a real Lotus. 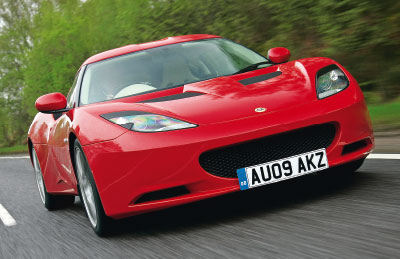 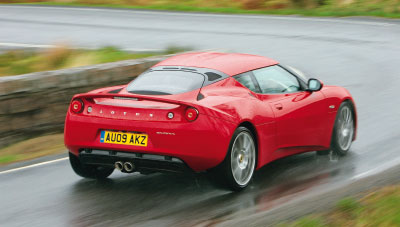 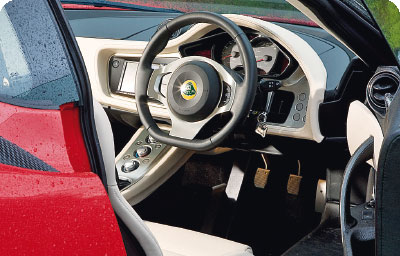