If you believe the advertising spin, the new 2-Series Coupe is ‘BMW to the power of 2’.

However, having spent three days in Tasmania fanging the M235i on road and track, we reckon BMW could be selling its hot new coupe a bit short. Until the new M3/M4 twins arrive in Australia later this year, the M235i might just be the best car Munich currently makes.

A bold claim? Perhaps, but what this modern day 2002 Turbo lacks in outright punch compared to the full-fat M models, it more than makes up for in accessibility and driver enjoyment. 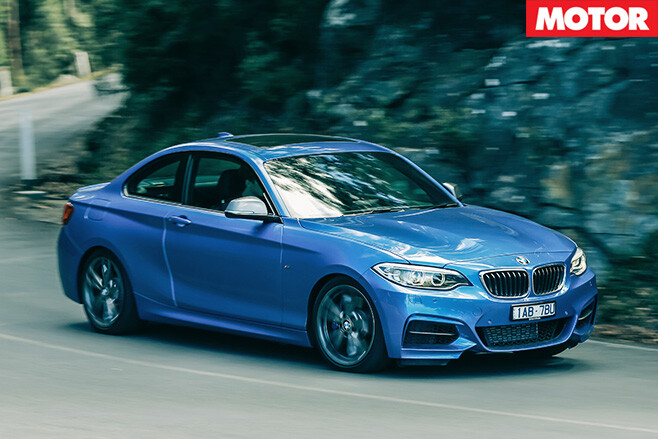 The M235i is the latest addition to BMW’s ‘M Performance’ range, cars that have been given the once-over by the folks at M Division, but stopping short of the thorough re-engineering that goes with the creation of a ‘proper’ M car.

BMW says the target for these M Performance products is “30 per cent of a proper M car”. Based on our experience thus far, we’d say the engineers involved are rather over-delivering on their brief.

But before we get into the nitty gritty of what the M235i is like to drive, let’s deal with the name. BMW’s current naming system is a bit of a minefield, but the 2-Series essentially replaces the 1 Series Coupe, a car that’s found over 5000 homes in Australia since its introduction in 2008, the hi-po 135i taking the lion’s share of sales. 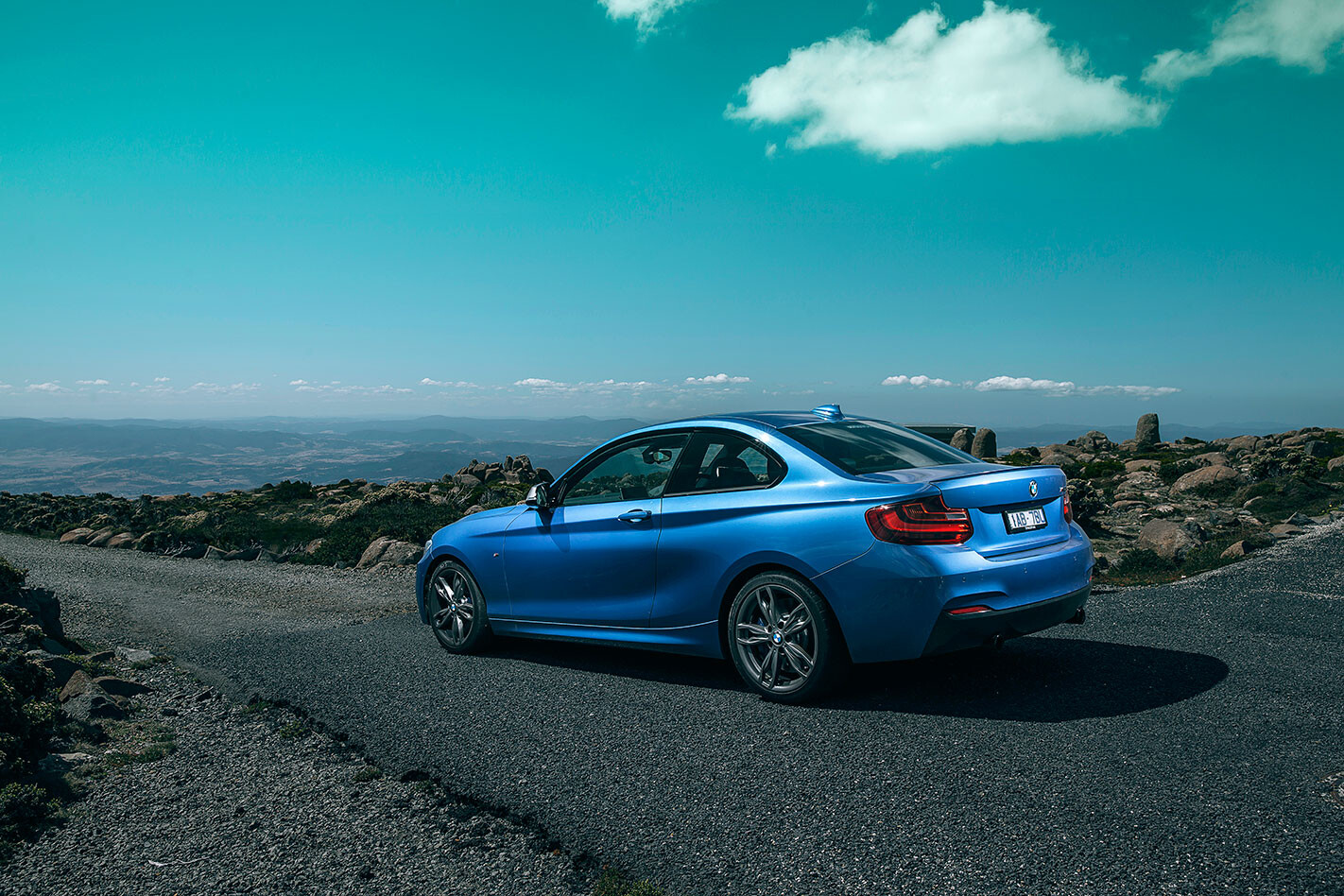 The 2-Series is 72mm longer, 26mm wider and 5mm lower than its predecessor, and the new nomenclature has given BMW’s stylists the freedom to produce a car that is both more homogenous than the previous 1 Coupe and far more pleasurable to look at than the current 1 Series hatch.

That said, despite wider tracks (41mm front, 43mm rear), it really needs the optional 19s to fill the arches and the overall shape, while attractive, is perhaps a little bland.

There’s nothing bland about the way it goes, though. Outputs of 240kW/450Nm feel, if anything, conservative, judging by the way the M235i hauls itself down the road. Claimed 0-100km/h is 4.8sec and from the seat of the pants there’s every chance the quarter mile time will dip into the 12s. 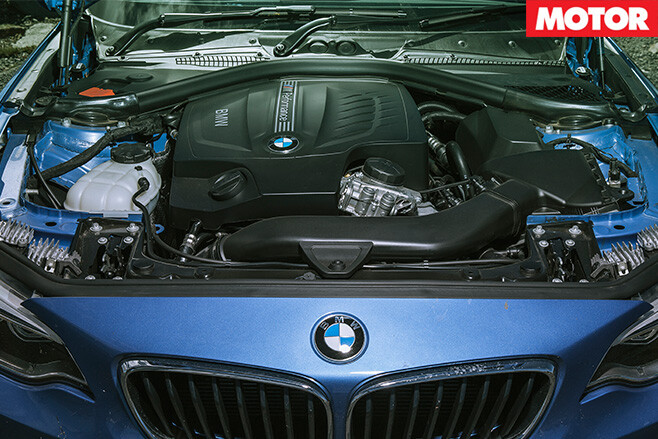 Adding trickery such as a twin-scroll turbocharger, direct injection and variable valve timing and camshaft control allows the 3.0-litre straight six to produce hefty helpings of power from just above idle (peak torque starts at 1300rpm) all the way to the 7000rpm redline.

When combined with the standard eight-speed ZF automatic, the engine’s flexibility forces a complete rethink of which gear is appropriate for any specific corner. Tackling the tight, technical confines of Baskerville Raceway, fourth gear proves ideal for corners that would traditionally be borderline between second and third and even then, such is the engine’s urge, wheelspin and power oversteer are always available on request.

The gearbox itself is superb, smooth and swift in its responses, and having eight ratios to choose from means there’s a gear for every conceivable type of corner. But with such a wide power band, we suspect the longer gearing of the (no cost) optional six-speed manual would deliver a less frenetic, more rewarding drive. 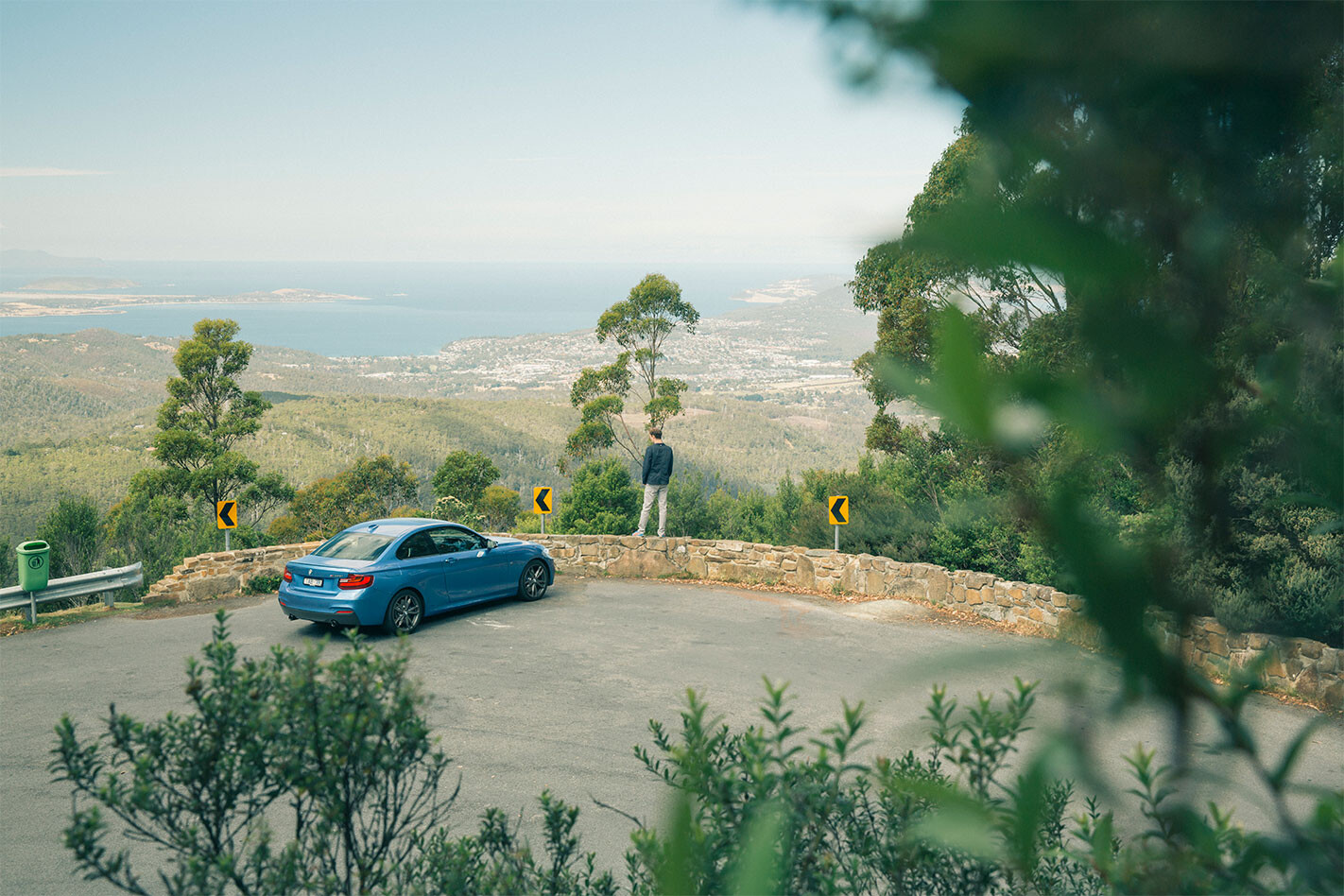 Sadly, confirming that theory is going to be difficult, as BMW expects so little demand for the three-pedal version that it’s unlikely to make one available for us to test, which seems slightly odd given how little trouble it had shifting 100 or so of the manual-only 1M.

What can be confirmed is, for serious drivers, optioning the M Performance limited-slip differential is a must. Though it carries a seriously hefty price tag of “$7000+” (pricing to be confirmed), it has the potential to launch the M235i from very good into the pantheon of greats.

It’s not simply about making the car do enormous drifts (though that certainly wouldn’t hurt), it’s about giving it the traction to make the most of the engine’s power and giving it predictability when you approach and then step over the limit. Perversely, it’s less of an issue on track, the higher speeds and greater lateral load allowing the car to move around more progressively. 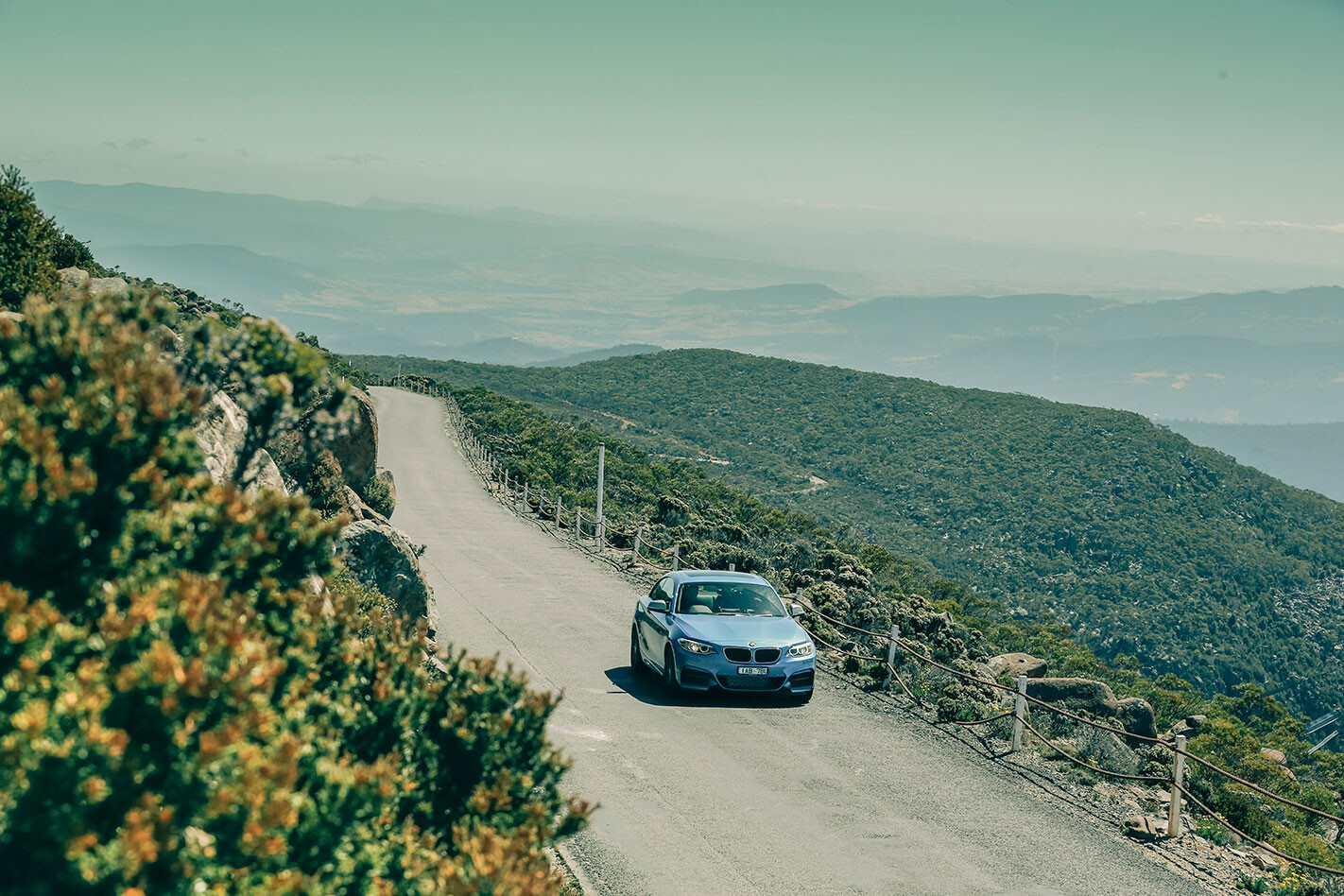 Move from the racetrack to the road and you’re presented with a choice between the ESP symbol flashing like a strobe light or power being scrappily spun away by the inside wheel and messy half slides as the car tries to decide whether to send power to one rear wheel or two.

Like the Golf GTI, the M235i has a system that brakes the inside spinning wheel to transfer drive to the outer tyre and, like the Golf GTI, it doesn’t work. We’ll report back the moment we try an LSD-equipped M235i.

Whinge over, we can get onto the good stuff, of which there's plenty. As mentioned, the engine is savage, with great response and a howling soundtrack (though it does drone a bit when cruising). 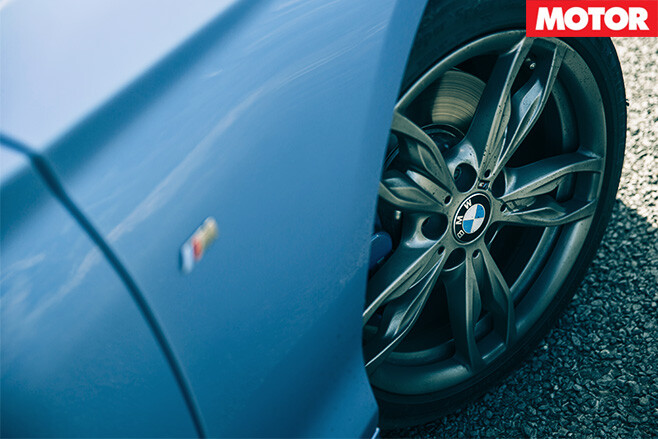 On track, the soft Michelin Pilot Super Sports tyres overheat before the brakes do, the standard M Sport package (340mm discs and four-piston calipers up front; 345mm discs and two-piston calipers at the rear) refusing to fade even with smoke billowing out of the wheelarches.On road, both are more than up to the task, and it’s on the winding, bumpy roads of southern Tasmania that the rest of the chassis proves its excellence.

Adaptive dampers are a welcome standard feature on the M235i, allowing the driver to select from Comfort, Sports and Sports+ modes for the suspension as well as the throttle and steering. Even more welcome would be the ability to individually select each parameter (eg, Sports throttle with Comfort suspension), but that luxury is restricted to fully fledged M cars for the moment. 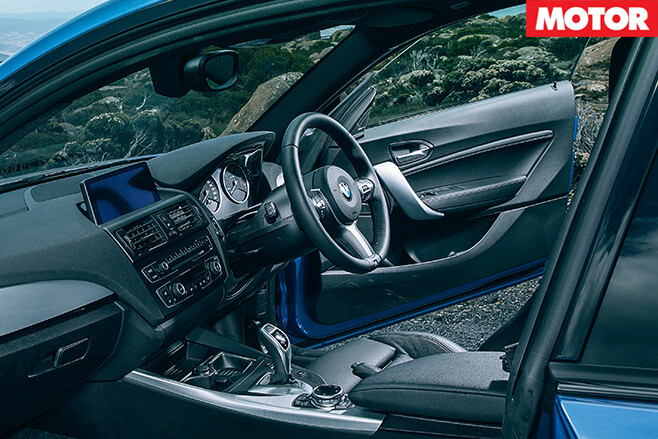 If you can’t be bothered fiddling around with the buttons, dialling up Sport delivers an excellent compromise between ride and body control, and is arguably the pick of the steering settings, too, avoiding the excessively heavy weighting of Sport+.

There’s not a whole lot of feel, but you never have issues placing the car where you want it and, thanks to a variable ratio rack, there’s just 2.1 turns lock-to-lock.

Where things get complicated for the M235i is when it comes to pricing. For some, the $15,000 premium over the more-or-less mechanically identical M135i hatch will be madness; for others, it’ll be a small price to pay to look like you’re driving a sports car not a shopping cart. Where it gets tricky is that $79,990 is really just the beginning. On the other hand, given it’ll match a V8 M3 in a straight line and probably give it a hurry up around a track, too, perhaps that price tag isn’t so steep after all.

BMW's been making small, agile, rear-drive coupes for over 50 years, and when you drive the M235i you can tell it’s had plenty of practice. While it’s not perfect, the M235i proves some folk inside BMW still know how to make a car that delivers on its core values of driving excellence.