Let’s face it, while the BMW 530d might be fine for the Victorian and NSW Highway Patrol, if Mad Max was set in today’s world no supercharger would be big enough to lure Max Rockatansky back to The Force to drive a diesel six.

But we bet the BMW M550i xDrive might change his mind. Although it’s been around since 2016, BMW has only just recently sorted a right-hand drive version for our market. And BMW Oz is using the baby M car to fatten the 5 Series range before the facelifted G30 M5 lands here this October.

What makes the M550i so special is a 4.4-litre two-pump lump of alloy V8 hiding in its nose, defining it as the last of the V8s among the reduced-fat performance sedans from AMG, RS and M. We know what you’re thinking, though.

And, yes, while it’s awfully close to the M5 Competition’s mighty S63 V8 in capacity and core dimensions, the M550i’s engine is actually the more ‘pedestrian’ N63 V8 pinched from the M850i. 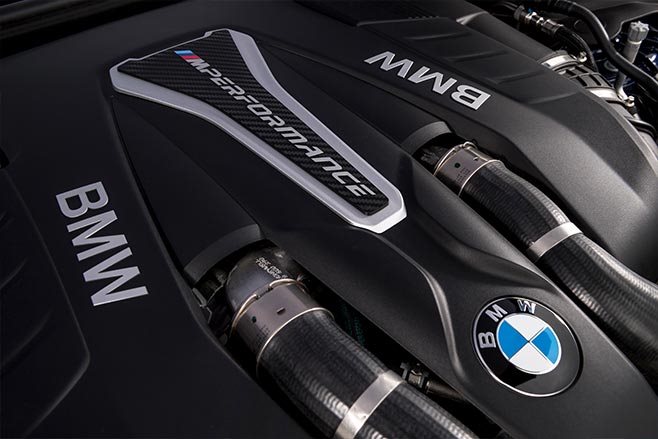 Recently updated with larger twin-scroll turbochargers within its vee, as well as an improved ignition system, a freer intake manifold and a revised crankcase, outputs have spiked 15 per cent with power growing from 340kW to 390kW and torque jumping from 650Nm to 750Nm – the latter matching an M5 or M8 Competition.

Squeezed through an eight-speed automatic transmission hooked up to BMW’s xDrive all-wheel drive, the result of bunging that much power into something weighing a humble 1810kg (an AMG E53 is 60kg pudgier; the Audi S6 100kg) equals explosive acceleration in a straight line.

The M550i will lazily dust off its 3.8sec 0-100km/h claim with a fumbled launch procedure and embarrass it with a more conscientious approach. In fact, the Polish-made Bridgestone S007 tyres struggle to contain the urge loaded against the torque converter’s stall on cool tarmac with launch control. Then again its footprint measures at a modest 245mm-wide up front and 275mm-wide up back.

When unleashed cleanly the M550i is ferocious, building a deep bellow as it pins you against the plush leather driver’s seat to hit 100km/h from rest in 3.62sec. Traction is absolute. We’re frightened about how quickly it might reach 400m since it vaporises 80-120km/h in 2.06sec. 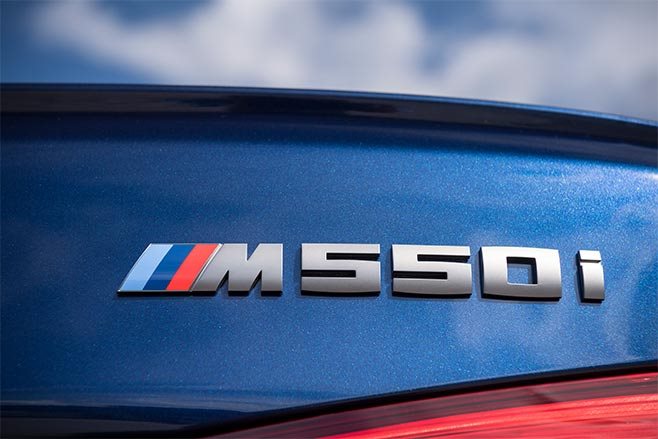 For comparison, a ‘fast’ car like a 6.2-litre V8 powered Chevrolet Camaro SS with 339kW needs another 0.7sec to blast through the same speed range.

You can pair this stonk with two different flavours of chassis that are based on the 5 Series aluminium-rich structure. Our test car’s Pure specification demonstrates the first, fitting an M active differential to the rear axle, M adaptive suspension and huge M brakes that nicely fill its standard-for-Oz 20-inch wheels.

Or a wagon: Alpina B5 Touring review

This sets you back a very reasonable $137,900. Upgrade to the full-fat M550i xDrive, however, and not only does the price grow to $149,900 but active roll stabilisation and rear-wheel steering further bolsters its handling.

The best way to describe the M550i in corners is it’s like an overgrown M340i xDrive. It greets you with a nose heavy front-end along with steering that never texturises and feels slow given the car’s size. That it needs 2.9-turns to go from lock-to-lock at rest proves a rear-wheel steering system is a must for anyone who navigates car parks often. 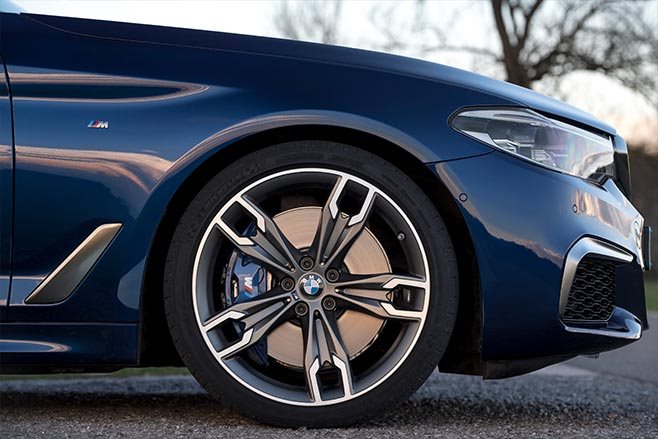 But like the M340i, you need to peel back the M550i’s layers to reveal its true character. Its adaptive dampers refreshingly offer only two modes, while its powertrain can be dialled all the way up from Comfort to Sport Plus. During tight cornering the M550i can get a little vague and pushy at corner-entry. The all-wheel drive is apparently fully variable but as long as the ESP is on it’s staggering how much throttle the chassis will accept given the grunt on offer. Meanwhile the eight-speed ZF gives you full control of its powers, crisply shifting up and down without a shrug in manual mode.

The brakes are strong, arresting the M550i’s bulk from 100km/h to a halt in 35.52m. They offer accurate feel charging through faster sweepers which is where the M550i is better balanced. It’s here that switching off ESP reveals just how rear driven it can be, the powertrain happy to indulge in small slithers of throttle oversteer.

Credit to its suspension tune, though, it’s an easy car to gather and the low-speed damping offers incredible body control over a surprise mid-corner bump. Otherwise big revs and full steering lock at low speed should do it if you want to channel your inner Formula D driver. Legally, of course. 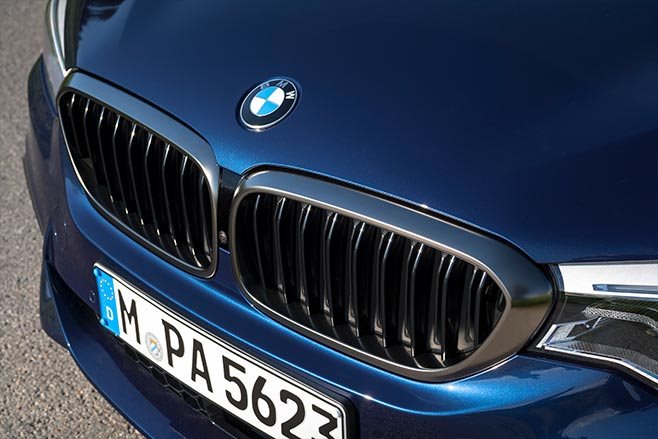 The wonderfully compliant ride validates the M550i for everyday use, transforming most city roads into cushioned commutes where only serious potholes threaten to find its bump stops. Meanwhile the V8’s fantastic part-throttle driveability only reinforces this. You’ll love the interior if you find the specification in a 530d fancy enough (we reckon it could do with a touch more flair), while the cushioning front seats offer a seating position typical for a big sedan with good elbow and head room.

Its exterior is secret service spec, with the designers only going as far to repaint some exterior trim bits in grey and add a subtle rear lip spoiler, that suits the car’s sleeper vibe. We do love, though, how each exhaust tip houses a pair of actual non-fake square pipes (take note, AMG!). They play a high-tech yet deep, free-revving timbre – at least from inside the cabin.

Since the M550i’s spinach-fed strength might be lost on somewhere like Australia, Audi’s S6 and Merc-AMG’s E53 rise as the thinking person’s options in this category. But it’s impossible to ignore the performance-to-price equation here.

That the M550i Pure is quicker to 100km/h than an M5 Competition while charging almost $100K less proves you’re getting lunatic M-grade performance and unbelievable V8 noise without key drawbacks like a stiff ride.

Yes, the steering’s iffy. But if the rest ain’t enough convince you, or a Max Rockatansky, nothing will. 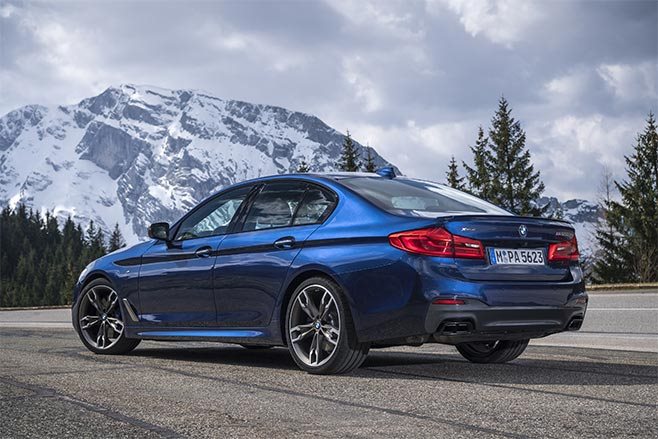 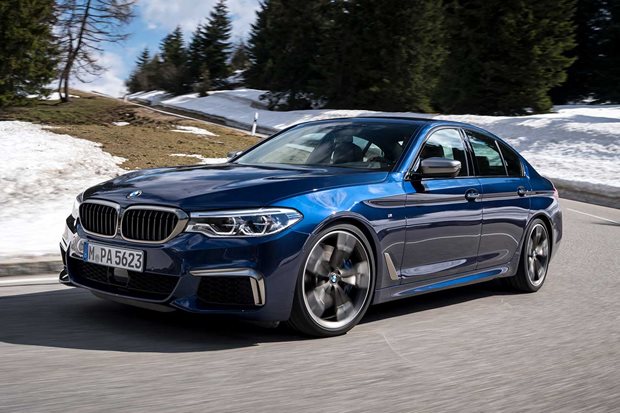 Baby brother to M5 is available at a tempting price