You don’t often hear of a bloke being too successful, but it can happen. And the tragedy is that it happens to honest, hard-working blokes more than any other type.

Here’s the classic scenario. You’ve been running your own trade-based business for a few years now and despite a succession of state and federal governments trying to harpoon it, you’ve actually done all right for yourself. You’ve now got a team of lads working for you and the contracts are still coming in regularly. 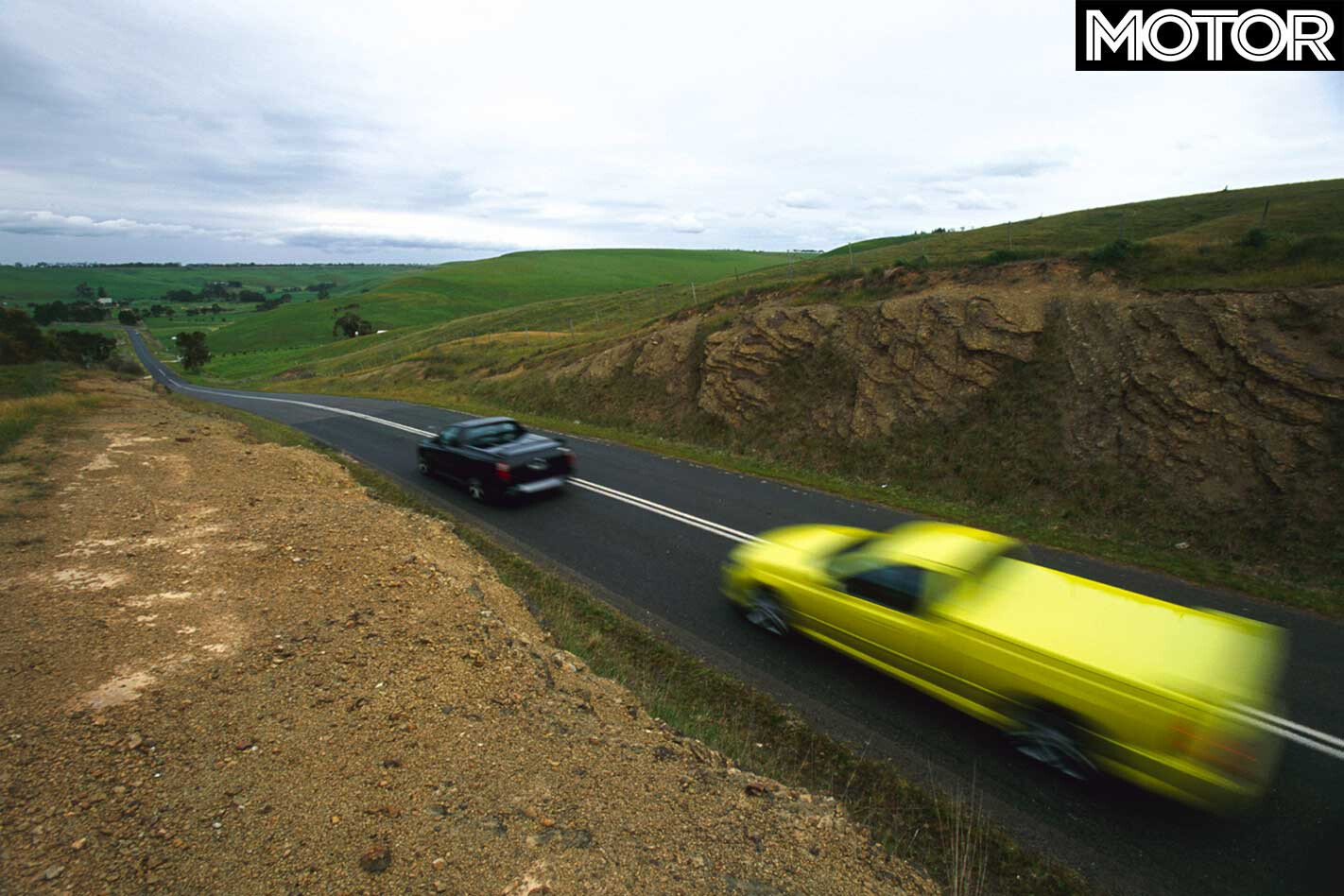 Yep, it’s time for a nice new car, but there’s where your own success could be your downfall. See, you don’t need to cart a tray-full of tools to the job any more, and somebody else tows the backhoe these days. But what are the blokes going to say if you turn up next Monday in a Beemer?

And what about your suppliers – little blokes who run on a shoestring to keep you buying the bits and pieces you need locally? Aren’t they going to be tempted to jack up their prices if they think you’re laughing too hard on the way to the bank each Friday lunchtime?

Damned right, so what do you do? Well, rest easy, because both HSV and FPV have blokes like you firmly in mind.

Get yourself into either a Maloo R8 or an FPV Pursuit ute and you’ll get all the performance you ever wanted, all the luxury and the blokes you deal with every day won’t suspect for a minute that you’ve stopped drinking straight from the thermos. Hell, any boss who still drives a ute can’t be all bad, right? Correct.

In the ute world, the Maloo R8 and the FPV Pursuit are kings. They are, if you like, two-door, long-boot versions of the ClubSport R8 and the Falcon GT respectively. The chairmen of the board in Blunnies and a blue singlet. Perfect.

In conceptual terms there’s very little to separate the Maloo and the Pursuit, but in the metal they’re quite different animals. Yet still both animals, if you know what we mean.

Until now, the 290kW 5.4-litre Henry mill has had a bit of an edge over the 260kW version of the HSV 5.7. Like we said, until now. With the step up to 285kW trim, the Gen III in the Maloo is now endowed with all the mid-range and bottom-end urge the Ford can muster.

Sadly, for both parties, that still ain’t a whole hell of a lot considering both measure better than 325 cubic inches. But the 285kW/510Nm is significantly more muscular than any previous incarnation of the LS1.

The point is that while there’s more oomph on tap below 3000rpm than before, you’ll still need 4000rpm showing on the Maloo’s tach before it’s really boogying. From that point, too, the Gen III starts to get pretty thrashy and noisy, betraying its pushrod architecture and all-alloy (it conducts noise better) construction.

The Ford, meanwhile, gets hustling by the time the needle has swung through about 3700rpm and feels slightly more two-stage than the HSV, with a more marked transition between mild and wild. And it keeps its cool right through to the limiter.

Past experience suggests, of course, that even though the two are now very close in outright power terms, the HSV will be quicker thanks to the fact that the Henry gives away almost 170kg at the weighbridge.

And since a drag race hides any flat patches in the power delivery, and since we’ve had plenty of 260kW HSVs run 13s before today, and since the V8 BA ute has always been hard to extract a quick time from, it was a forgone conclusion, right? Er, no, actually.

Dunno whether it was the air on the day or what, but despite plenty of snap shifts, torched tyres and stinky clutch action, we couldn’t break 14.5 in the Maloo. To be honest, it just felt like an off car. Despite a brand new clutch and tyres, it just couldn’t be launched cleanly.

Try to keep things sane and the bugger bogs off the line; give it too much and it’ll axle-tramp until it feels like the rear quarters are about to jump ship. In fact, it shakes so bad on a hard launch that she eventually threw an exhaust hanger, allowing the big-bore pipe to bang against the rear skirt. A burnout? Nope, she wouldn’t drop a skid for love nor money.

The Pursuit, meanwhile, is a vastly easier thing to get off the line, even if it’s not actually any quicker (a tenth either way doesn’t count). But it ain’t perfect, either. Too little gas and it’ll still bog down a little, and too much sees the rear bags go up in expensive, Dunlop-coloured smoke.

Okay, so maybe you could find the happy medium with time, but the throttle-by-wire set-up is so short in travel and lacking in feel that it’s impossible to back off just the right amount to bring it all back to hook-up point.

Neither have terribly co-operative gearboxes, either, and it’ll come down to personal preference as to which is the least crap. It’s possible to miss a shift in either car (usually the two-three shuffle) and it’s only the lighter clutch action of the HSV that scores it any real points south of the flywheel. Out on the road, the HSV soon emerges as having a better matched front and rear end.

The ride is a bit softer initially, although there’s still no mistaking a bump for exactly what it is. But that little bit of initial plushness means it feels great on a smooth surface; you simply need to understand that both ride quality and traction will go sharply downhill as soon as the bumps arrive.

The FPV, meanwhile, leaps about on pocks and holes, but more than that it feels like two halves of different stories. The front end is actually quite good, with more feel than the Maloo can muster, but the wayward rear end means the tiller isn’t ultimately as accurate. Combine that with the HSV’s ability to give you exactly the amount of lock you requested and it’s the more trustworthy in faster going.

The Ford’s rear end is at its worst over a series of bumps, downhill, mid-corner. Okay, so not too much copes with that stuff too well, but in the Pursuit’s case you can feel an almighty struggle going on between tyre grip and unsprung weight. All that wheelbase means it telegraphs its unhappiness quite well, but you’re still never sure it’s going to grip again when the live axle has stopped hopping about.

And when you’re really pressing on, the Falcon feels more prone to body roll, not to mention heavier, wider, longer and much more of a handful.

Heading back up the same hill, you soon find that the limitations of the leaf-sprung rear end are somewhat. Power-down falls well behind the HSV, with a desire to break loose that will delight some owners for all the wrong reasons.

The Maloo’s IRS, meanwhile, is much more squat-and-shoot and you can pour on the coals in tighter exits without the same little voice in the back of your mind wondering out loud whether it’s all about
to spear sideways.

When it comes to stopping, both vehicles get excellent brakes that we couldn’t make fade, even at the drag strip. While the Maloo gets sexier monobloc calipers, the FPV makes do with old-fashioned sliding-caliper jobs. Yet the Henry has the better pedal feel, while the centre pedal in the HSV is deader than tube tops.

The caveat with all this dynamic assessment stuff is that the Pursuit’s simpler-than-Hanson rear end is going to make it the superior tow vehicle and load carrier generally. If that’s part of your purchasing brief, bear it in mind, but if the most you ever carry is a trailbike and a bedroll, it probably won’t matter.

Inside, the good work done by Ford on the BA’s interior is still paying off. The suede seat trim and green stitching mightn’t be to all tastes, but the dashboard is clean and simple, although it’s not only the light switch on the stalk that seems a backward step from the AU.

We’re still left wondering about the lack of a redline (although the Maloo doesn’t get one, either – you rely on the shift buzzer and light) and why there’s no gear pattern printed anywhere.

And that starter button… ye gods. Ford tells us the punters love it, but we’re not buying it. It’s a dopey affectation in a car like the Pursuit and it’s poorly executed since it makes starting a two-handed job.

I’m also aware of the fact that many people like hard tonneaus, but I’m not one of them. Even a pushbike won’t fit with the lid shut, and the spoiler on both the FPV and the HSV is positioned to hide most of what’s going on behind you. The Maloo, meanwhile, trumps the Henry on the quality of its pews (the R8 adds the gun chairs from the Clubbie R8) but the rest is a bit kitsch.

Given their humble origins, neither of this pair are what you’d call cheap, but considering the performance they dole out, well, maybe they’re not so expensive after all. The FPV weighs in at $54,850 in standard trim, including the Performance brake package (which is optional on the XR8 ute but standard on the Pursuit).

While the FPV is an attractive package with its nod to its working past, that DOHC engine and clean interior, in any dynamic contest the Maloo scores a points decision purely for its better grip and overall handling.

And I know I say this every time products from the red and blue corners start butting heads, but if we were dealing with automatic versions of the same vehicles the positions might well be reversed. The clunky old auto tranny in the HSV is just too crass for a lot of buyers, while the Ford slushbox is definitely smarter than the average bear. Or lion.

This tyre-frying beast is the Ford F150 Lightning and it’s the king of the US sports trucks. Packing a supercharged 5.4-litre bent eight, the Lightning pumps out 268kW at a very lazy 4750rpm. Redline is just 5250rpm, but this doesn’t stop the 2120kg Lightning from rocketing to 100km/h in a frightening 6.3 seconds.

Any thought from Ford brass to bring the beast Down Under? Ah, no. The F150 series actually has a smaller payload than our one-tonne utes (the Lightning’s only good for 500kg). And besides, Ford reckons the XR series and FPV Pursuit fill our needs pretty well. Too right.

The F150 series of trucks differs greatly from the F250 and F350 range, so Ford would have to stump up for extra parts supply and service training. Not worth the hassle, really.

With the Monaro getting its Green Card to the US as a Pontiac GTO, there’s been plenty of talk of the Holden SS ute or Maloo going to the States to revive the Chevy El Camino badge.

The road block stopping this is America’s powerful Union of Automotive Workers (UAW). They get all narky when foreign-built cars are imported and sold under local badges. Particularly ones using American engines and gearboxes. That’s why GM will be importing 18,000 to 20,000 GTOs when the free demand might be closer to 60,000 units.

While there’s no contract, there is an agreement for GM to take their 18-20k allocation from Holden, certainly for the short-term future. Whether these are all Pontiac GTOs or a combination of El Caminos and GTOs remains to be seen.

Five Falcon Pursuits from the past

Five Blasts from HSV Maloo’s past