I love my Blunstones, I love the Wallabies, I love Banjo Patterson’s work. And, man, I gotta tell you, I love utes. But as a consumer of utes (I’m on my third in eight years or so) I’ve got to wonder about the HSV Maloo R8 and FPV Pursuit.

Based on the fact that I use my own trayback for everything from dragging a fishing boat around to hauling half a yard of topsoil, certain elements of either vehicle, particularly the Maloo, give me cause to question whether maybe the whole thing is getting too weird. 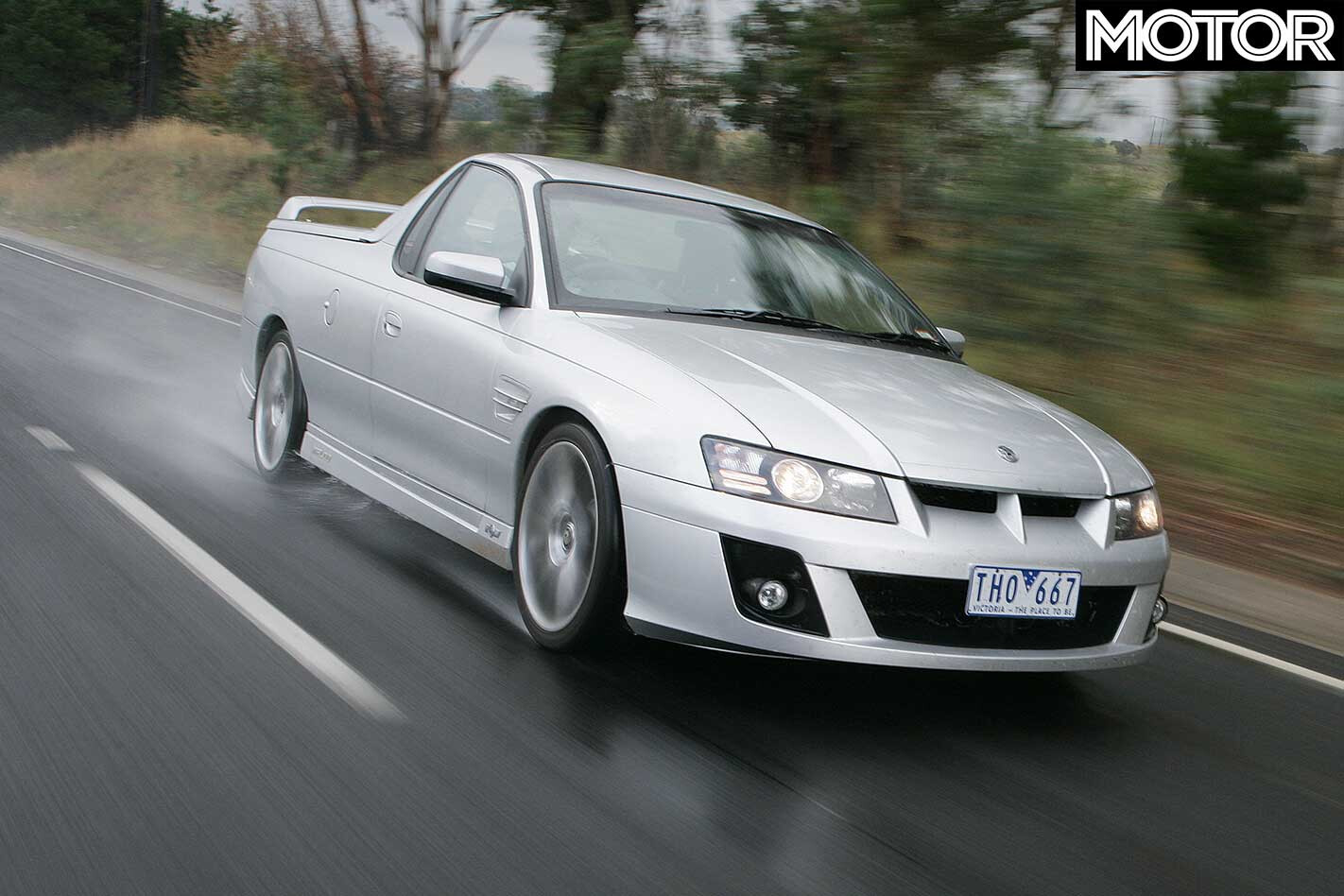 The HSV’s hard-tonneau (with a spoiler if ya don’t mind) for instance, limits what you can spontaneously scavenge from the tip, and those body kits won’t last long getting on and off building sites.

But then you look at the performance numbers, and you pull your head in, because two-seats-and-a-tray notwithstanding, these are potent sonsofbitches. The Pursuit’s 290kW is a pretty honest number and puts it closer to the HSV ute’s output than HSV itself might be comfortable with. On the dyno the FPV and HSV were within a fraction of a kilowatt of each other (226.6kW plays 226.4kW respectively).

On the other hand, on the dragstrip, the Henry just couldn’t keep up, and its 6.2secs 0-100 and 14.2 for the quarter-mile are both about two tenths behind the Maloo’s numbers. Not a bad effort, though, since it gives away more than half a litre.

For the Maloo’s part, it’s a bit hard to see why it can’t get closer to the ClubSport’s 13.6 second quarter. I mean, they run the same boofy six-litre mill and six-speed ’box, yet the Maloo was nowhere near as quick as the Clubbie. Still, ute against ute, the HSV clearly gets away from the FPV in a straight line, in any gear. And that will count for a lot with many folks.

Away from the smooth hotmix of race-tracks and drag-strips, the Maloo pulls out an even bigger lead. While the Pursuit’s live, leaf-sprung rear axle feels pretty stone age when you start jumping it over lumps and craters in the backwoods bitumen, the Maloo’s independent set-up is far more likely to keep both rear treads firmly on the ground.

This is not something that takes any time to discover, either; it’s apparent from the moment you leave the town limits and crank things up to cruising altitude. The HSV’s advantage gets even bigger if you throw a few corners into the mix and that’s when the Pursuit’s front and rear ends stop talking to each other.

There’s a bit more to like about the Maloo’s engine-room, too, and while the Pursuit thrives on the sort of revs you don’t always feel like bothering with, the Gen IV stokes up early and just keeps on keeping on with a ripping top-end that seems like it’ll never stop.

The gear-shift is less happy, though, and the Henry claws a couple of points back in that department. In the final wash-up, not a single judge was moved to plump for the FPV, giving the Maloo five votes and daylight second, lack of track time notwithstanding (Maloo didn’t arrive in time).

The rider here is that things could be different if you actually use your 300kW utility for work as well as blatting around like a good ’un. See, as a work truck, the Ford has quite a bit more with which to recommend itself.

The cabin is a good place to start and as well as a cleaner presentation, it’s also got the unqualified benefit of that stash-space behind the seats. The HSV can’t match that, nor can it compete with the clever, poly-urethane tray (it’s not a simple liner) that doesn’t scratch, can’t rust and even seems to heal itself if you slice it with something big and sharp.

The leaf-sprung bum will also be worth its weight in gold should you ever want to tow big, heavy stuff or cart a tray-load of gold bars. Of course, all those comments apply in a non-performance car sense. And this is MOTOR, so they don’t count quite so much as they might in Blue Singlet Monthly. Like we said, daylight second.

Both spot-on 226kW. Surprising given HSV claims 305kW DIN to FPV’s 290kW DIN. More strange is how Pursuit produces more power and torque across the range.

The Pursuit carries on with axle tramp if you try and launch with more than 2500rpm, still 6.22-seconds to 100km/h is sharp for a hay hauler. Maloo faster everywhere.

A 1:57.59 is sharp for a sedan let alone a ute, the Pursuit was surprisingly stuck-down and lots of fun.

* Lucky Bastard never drove the utes and therefore didn’t vote. Scores for utes are out of 160, not 200