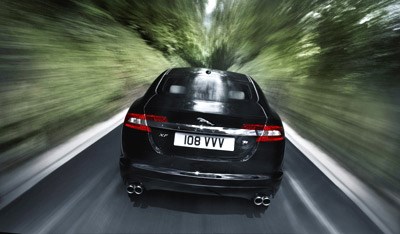 The Germans have ruled the hi-po sedan roost for a couple of decades now, but the British - and even the Americans with the impressive Cadillac CTS-V - have recently laid down the gauntlet to the tough Teutons. We knew what to expect when a modified version of Jaguar's new XFR - running a tweaked supercharger, improved aerodynamics and remapped ECU - ran 363km/h on the Bonneville salt flats in November. Then, at the international launch, we belted the car on marvellous, unencumbered Spanish roads and discovered this is simply the best-ever Jag - exciting, rewarding and almost certainly a better all-rounder than the more expensive motorsport-inspired BMW M5, autobahn-tuned Mercedes E63 AMG and über-powerful Audi RS6.


The supercharged version of Jaguar's all-new direct-injection 5.0-litre V8 features a Roots-type twin-vortex system blower - the same unit used by the Corvette ZR1 - with twin intercoolers. It delivers 375kW from 6000 to 6500rpm, a vigorous 23 percent increase over the superseded 4.2-litre blown V8 and yet still meets tough Euro V emission levels. Maximum torque of 625Nm (up 12 percent) arrives from just 2500rpm and runs to 5500rpm; not surprisingly, from little above idle the performance is relentless. The 0-100km/h dash is dispatched in a claimed 4.9sec and the standing 400m in 13.1sec, but really telling is that 80 to 113km/h (50-70mph) is demolished in just 1.9sec, proving the XFR a devastating overtaking tool. Top speed is limited to 250km/h. Without the leash the engineers admit that 300km/h is painless.

The XFR rips forward with a storming midrange delivery that allows you to tackle most twisting roads in just third and fourth gears. The performance is intoxicating, as is the new V8's delicious repertoire of sound which doesn't, for the first time on a supercharged Jag, include a whine (except for a distant, hardly discernible hum on full throttle). Perhaps the new V8 lacks the high-rpm sonic thrills of the V10 M5 and RS6, but this is still an absolutely magnificent engine. The powerplant is allied to the latest six-speed 6HP28 ZF auto 'box which shifts 10 percent faster yet with utterly fluent changes in both Drive or via the paddleshift manual mode. It's the engine's torque and the effectiveness of this gearbox that defines the character of the XFR, so that it is both crushingly effective and superbly refined and docile. Put your foot down, however, and you enter a new world for Jaguar.

Regardless of whether you're leisurely wafting or using the performance, the XFR is relaxing to drive. On first movements the steering (10 percent quicker) is light, but the car turns in brilliantly and the system soon adds some reassuring weight once into the corner, all while retaining its lovely delicate feel. The car settles quickly and remains agile and composed whether through 150km/h sweepers or tip-toeing into a village at 50km/h. The XFR immediately feels like an easy car to live with, unlike the M5 and RS6. The electronic differential, which can vary its locking torque between zero and 90 percent, allows you to play with the throttle to adjust the line, noticeably reduces understeer, and also means you can get on the throttle early in tight corners. If you're pulling away from a damp intersection there's none of the wheelspin commonly associated with many rear-drive muscle sedans.

The new electronic damping system does a great job of keeping the body taut and flat even on undulating roads that demand the maximum amount of wheel travel. Despite 30 percent stiffer spring rates, thicker anti-roll bars front and rear, and standard 20-inch Dunlop SP Sport Maxx 225/35 front and 285/30 rear rubber, the ride never deteriorates into harshness. Selecting Dynamic mode, via a button on the console, sharpens the Cat's claws further: the dampers' response is faster and firmer, throttle response is quickened, and the transmission allows the engine to hit the 6700rpm limiter without upshifting. Dynamic Mode is best left for the track; the basic chassis set-up is so good you notice the sharper vertical body motions more than any increase in point-to-point speed.

An underlying firmness of ride suits the XFR character, yet the continuously variable damping set-up is trick, soaking up road acne with aplomb. The secret is the variable-rate magneto-rheological dampers, governed by sensors which monitor body motions and steering inputs up to 100 times a second and individual wheel positions 500 times a second, as well as throttle and braking inputs, and adjust accordingly. The brakes, once a problem on hot Jags, are hugely effective via massive 380mm vented discs.

There's a little more tyre noise than the old SV8 and Jaguar still hasn't managed to eliminate wind flutter around the wing mirrors above 140km/h. But one of the great car cabins has been made even better in the R. The changes are subtle but include special dials, dark wood and more heavily bolstered, multi-adjustable and extremely comfortable seats that are so much better than the standard pews they should be optional across the XF range.

By now you will have noticed the predictable exterior mods: a lower front bumper with larger air intakes, deeper sills, bi-xenons, a vented hood, new alloy wheels, a discreet bootlid spoiler and quad tailpipes. By any measure, this is a great-looking car.

On paper the XFR may be a few clicks slower than the hot-rod E63, ferocious M5 and monstrous RS6, but even before driving the car on our ratty roads I suspect that the XFR trumps them all to be the best all-round hi-po sedan currently on sale. It matches the M5 dynamically and is almost line-ball for sheer pace; yet is far easier to live with as a daily drive and more amenable when you're not on maximum attack. It also has considerably more finesse than either the Audi or Mercedes-Benz, at a minimum of $30K less. Add the Jag's beauty, the obvious attention to detail and exceptional build quality to the equation and I'd argue the XFR sets a new standard for Jaguar. Stay tuned for the inevitable comparo test once the XFR arrives in mid-June.
Jaguar XFR
Body steel, 4 doors, 5 seats
Drivetrain front engine (north-south), rear drive
Engine 5000cc V8, dohc, 32v, s/charged
Power 375kW @ 6000-6500rpm
Torque 625Nm @ 2500-5500rpm
Transmission 6-speed automatic
Size l/w/h 4961/1877/1460mm
Wheelbase 2909mm
Weight 1816kg
0-100km/h 4.9sec (claimed)
Price $210,000 (estimated)
On sale June 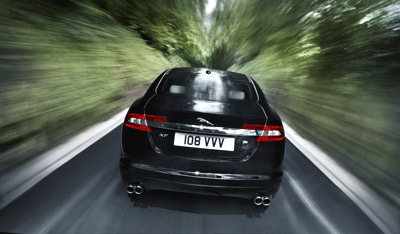 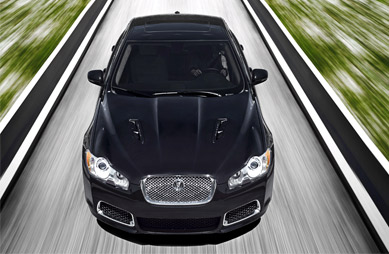 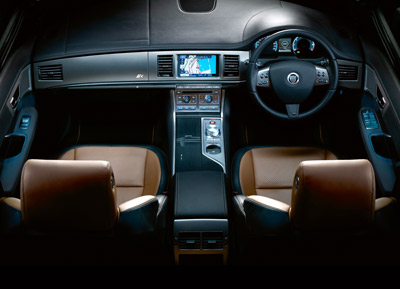