Can the Camry take down the accomplished Mazda 6?

TOYOTA’S box-fresh Camry is something of a revelation. Not just because it’s now built on Toyota’s impressively dynamic TNGA platform, or because it’s positively jam-packed with equipment – no, the Camry is intriguing because it’s no longer the visual equivalent of Rohypnol.

In fact, we’d go as far as saying that the Toyota Camry’s new clothes are pretty handsome – attractive, even. When was the last time someone complimented Toyota’s humble midsizer for its looks? Call us shallow, but appearance still matters.

But the Camry hasn’t let its newfound aesthetic appeal go to its head. Toyota’s product planners haven’t forgot the fundamentals of low cost and value for money that have made the Camry the top-selling midsize sedan for yonks, and at $39,990 for the high-grade SL 2.5-litre tested here you’re sure getting a hell of a lot of car and kit for your money. 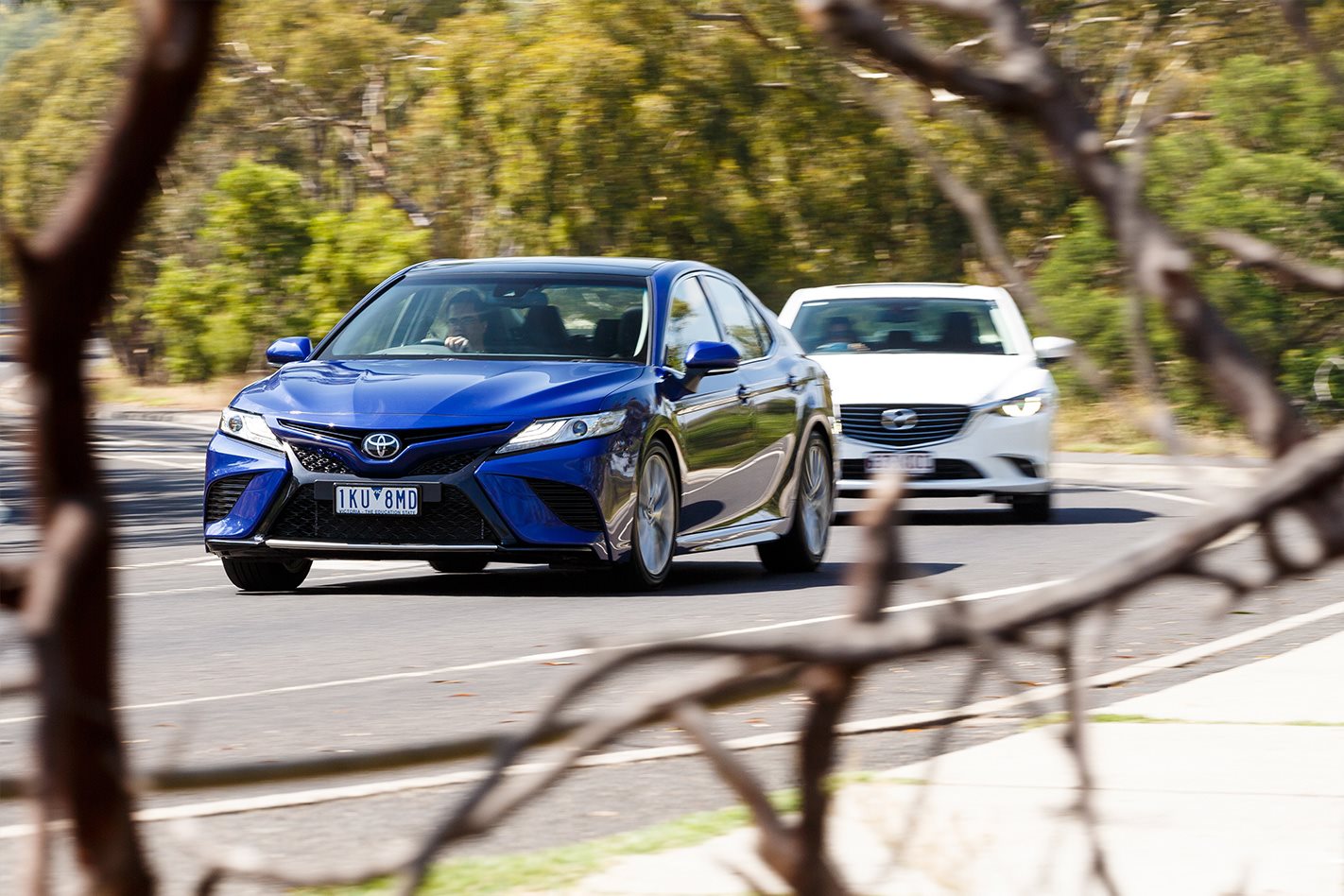 And that’s impressive given the new-gen Camry is now built in Japan rather than just down the road in Altona. But is that enough to give it the edge against its compatriot, the $42,690 Mazda 6 GT? Hiroshima’s biggest four-door has long been the segment benchmark as far as quality and driver satisfaction has been concerned, but the new Camry is gunning for its crown. Time to throw them both in the ring.

The value situation isn’t so rosy in the Mazda’s corner. Despite having a less-generous equipment list than the Camry SL, the Mazda 6 GT will cost you $2700 more to plonk in your driveway. 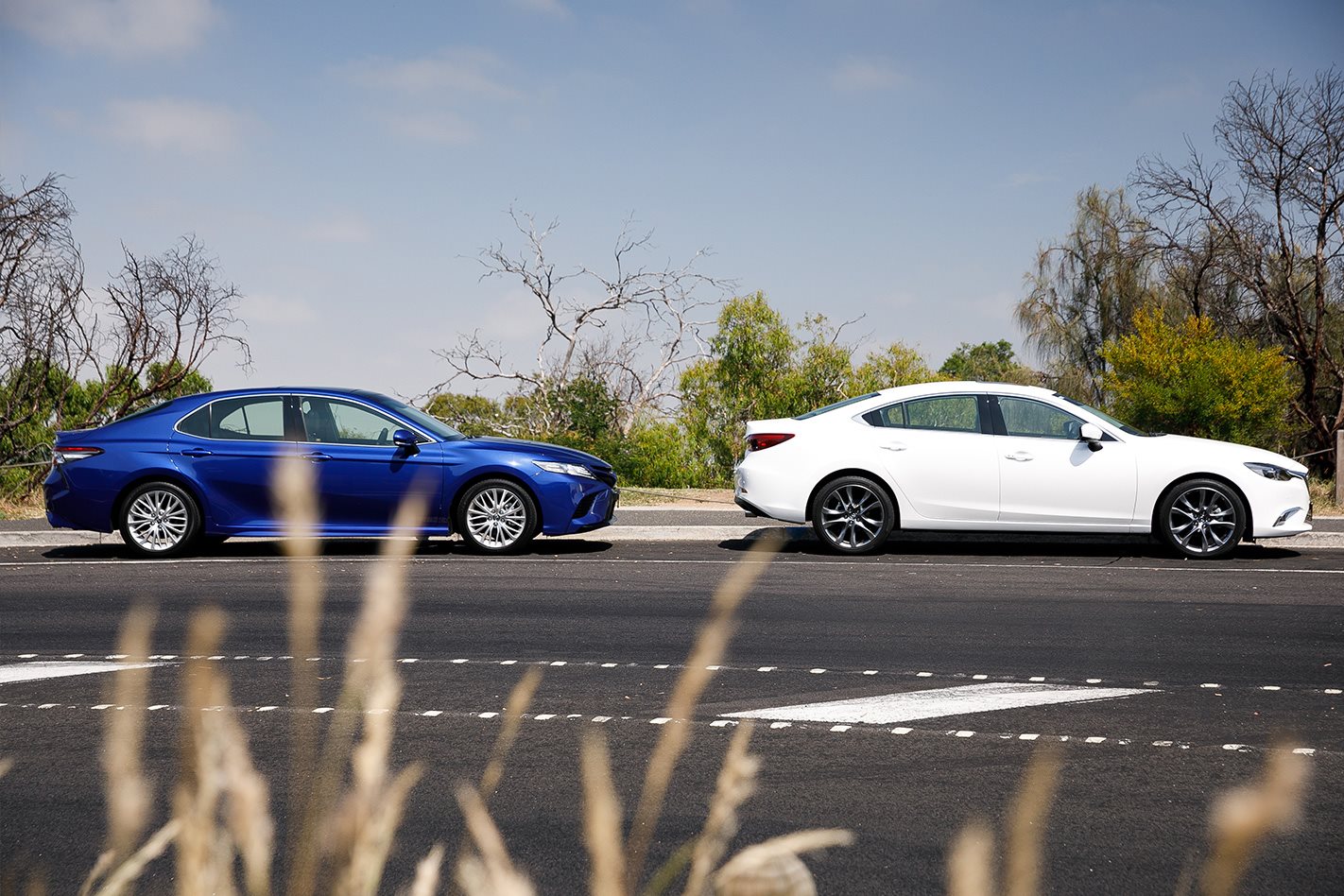 Standard equipment levels are nevertheless healthy, with four heated seats, dual-zone climate, active cruise, AEB and blind-spot monitoring. Yet while the 6 also has a sunroof and head-up display, both are much smaller and less useful than those found in the Camry.

Toyota’s interior designers have been let off the leash with this generation Camry, resulting in the most visually interesting cabin in the nameplate’s history. Front seats envelop occupants well, while the rear bench has ample legroom and supportive cushioning. Headroom takes a hit from the panoramic sunroof’s bulk, but thanks to a long and flat roof it’s the Toyota’s cabin that’s more welcoming of backseat passengers.

Infotainment has also taken a huge leap, thanks to a larger, more intuitive, more responsive and fully integrated touchscreen. It’s a far cry from the ho-hum infotainment fit-out of the previous-gen Camry, and coupled with a convenient wireless charging pad at the base of the centre stack  the Camry presents itself as a better vehicle for tech-lovers. 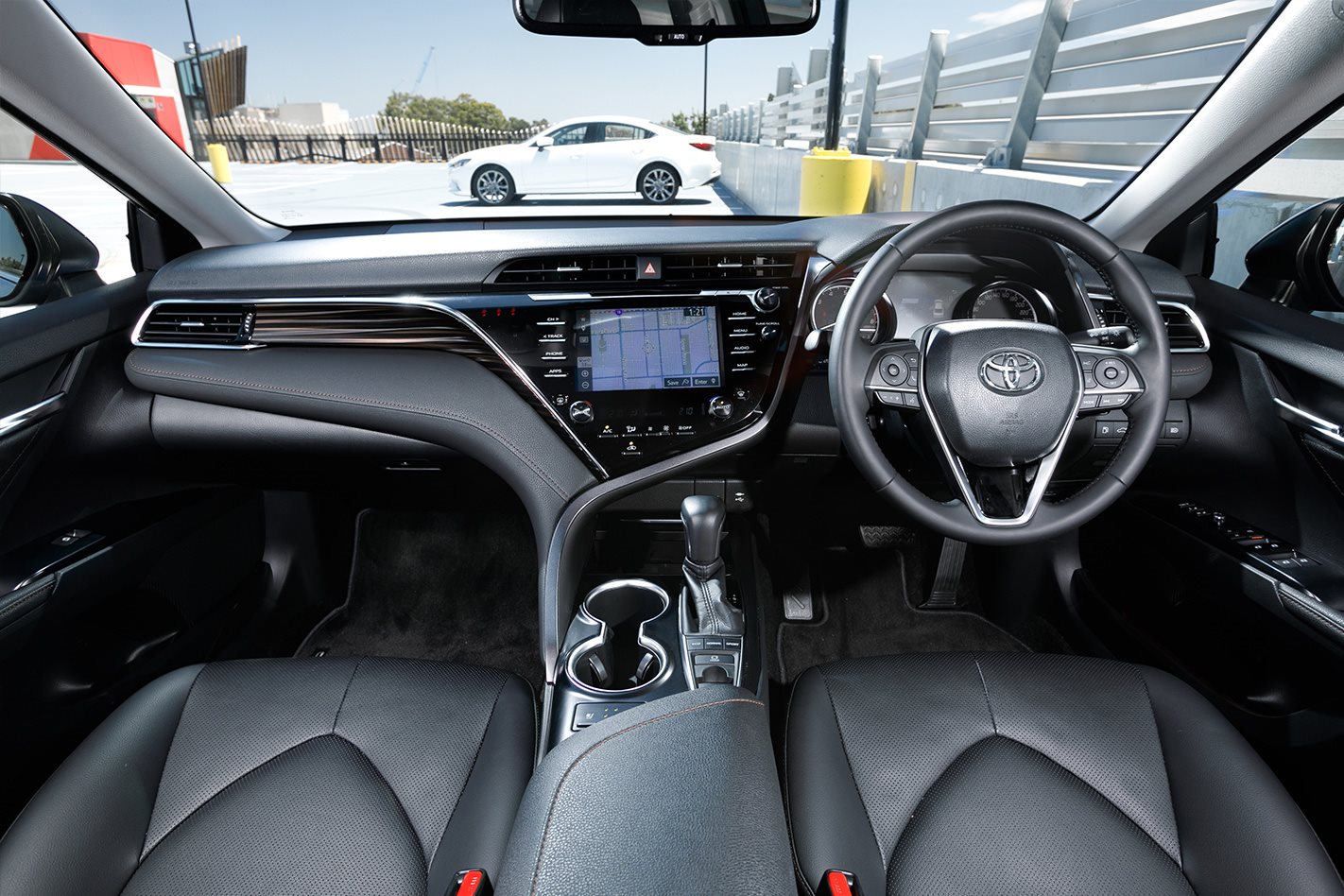 Though it’s the older member of this two-way, the Mazda 6’s leather-clad cabin still looks smart after all these years and is blessed with switchgear that borders on premium for feel.

Details let it down though, with the flip-up reflector for the head-up display not just looking fragile, but failing to actually project your speed over the car’s bonnet. That Camry’s HUD, which reflects off the windscreen itself, simply works better. The Mazda’s 7.0-inch touchscreen is also small by today’s standards.

The 6’s low-slung driving position is borderline sporty, but rear legroom isn’t as generous as it is in the Toyota, while rear headroom limited by the 6’s tapering roof. 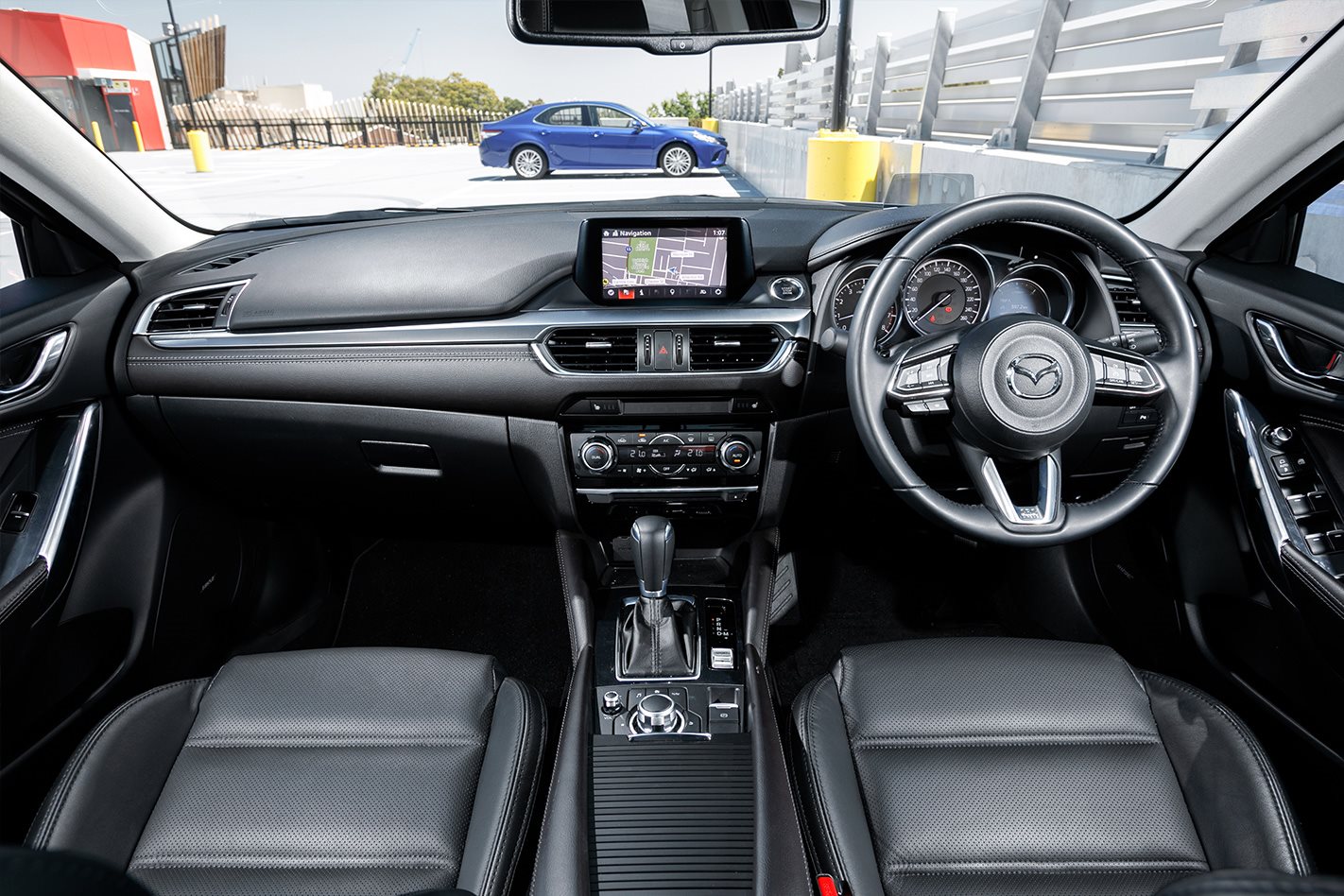 ‘Refined’ is the best descriptor for how the new Camry rides, its supple suspension and 18-inch alloys easily gliding over road imperfections while its muted engine emits a distant hum. There’s more body movement when traversing bumps or cornering hard which makes it feel less athletic than the Mazda, but some may be surprised at the Camry’s dynamic ability. ‘Soft’ definitely does not equal ‘sloppy’ with this one.

The firmly damped Mazda delivers a ride that certainly feels secure, but 19-inch wheels and low-profile tyres result in a brittle ride that transmits the edges of every manhole, expansion gap and corrugation. Steering is delightfully accurate, though, guiding a talented chassis that ranks among the better mid-size sedans. Shame about all of that road noise. 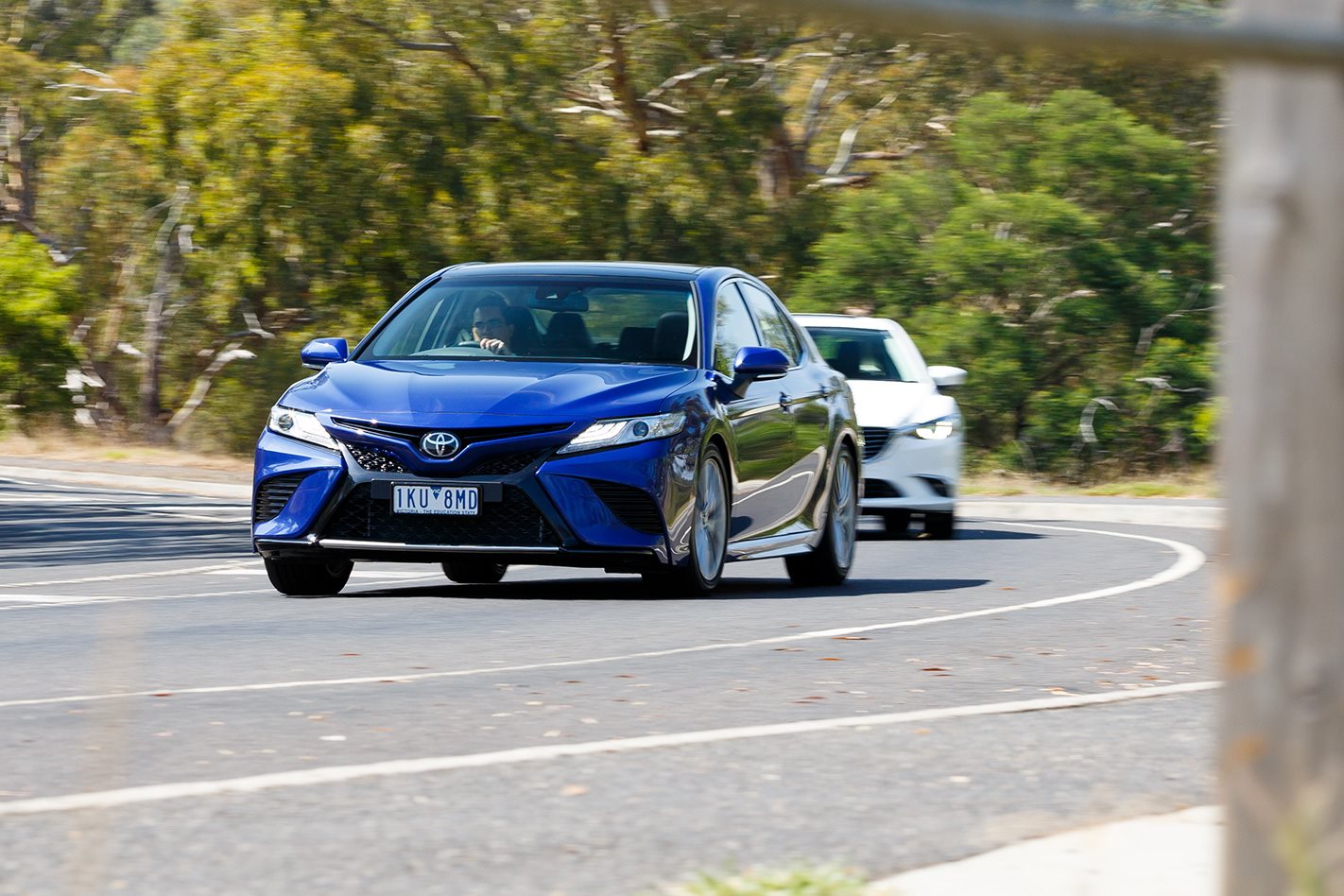 The Camry’s six-speed automatic has a preference for high gears, which often sees it second-guess itself up hills and hunt back down through the ratios before settling. It wakes up in Sport mode and the engine and transmission’s kickdown response to sudden throttle inputs is swift, but this is a drivetrain best suited to relaxed cruising, not urgent acceleration. Port injection and no start-stop tech harms its fuel efficiency too, though Toyota would argue that the Camry Hybrid is there to cater for fuel misers.

Mazda’s direct-injected 2.5-litre four is linear and responsive; the downside is strident induction roar at high revs, compounded by the 6’s road noise. Its six-speed automatic is a joy to use thanks to intelligent shift programming and responsive manual shift paddles, while an ultra-quick engine start-stop system helps the 6 gain the title of ‘most frugal’ by a significant margin. As far as drivetrains and powertrains are concerned, the Mazda feels tauter and more alert than the slightly dozy Camry 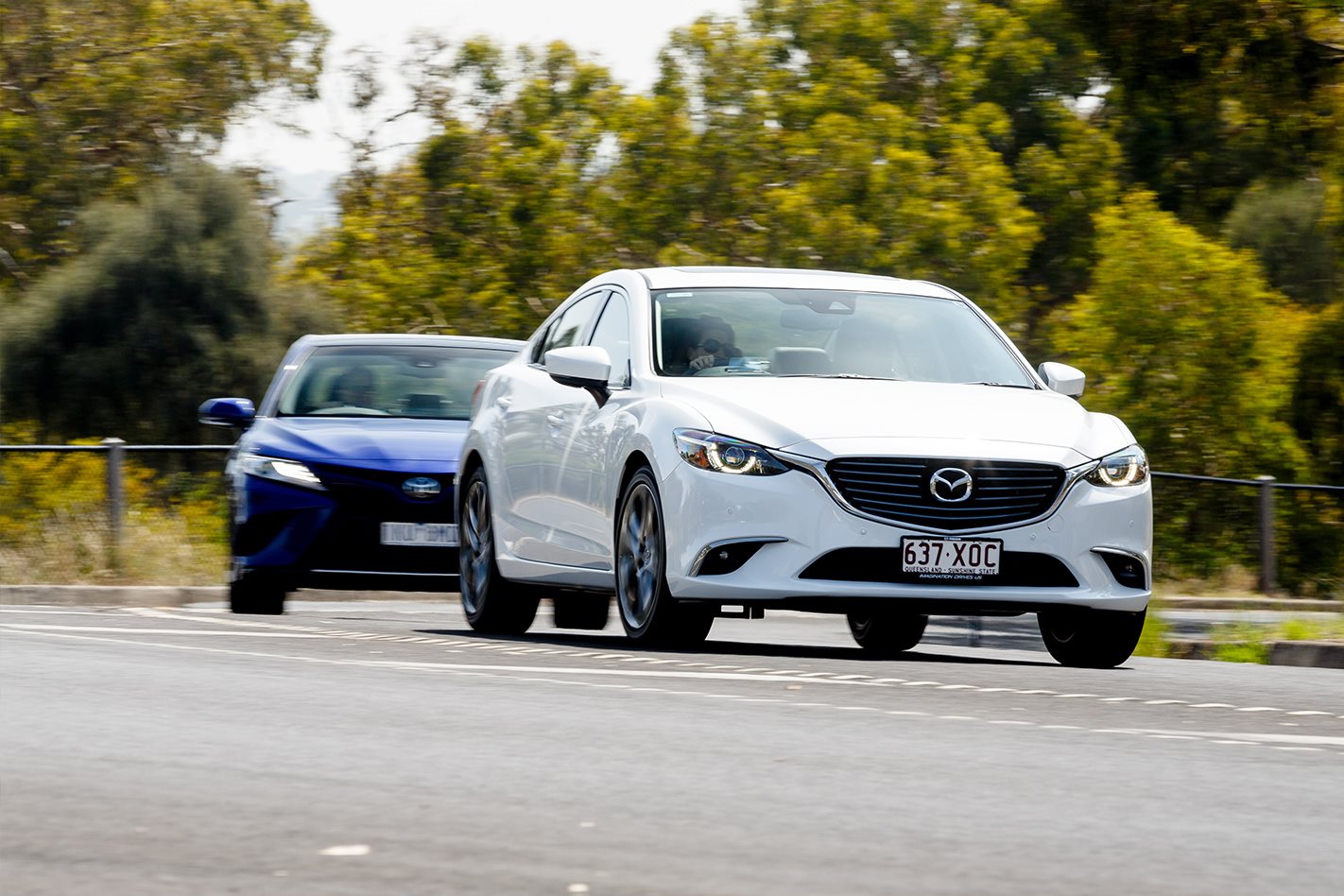 Toyota’s three-year/100,000km warranty is on the stingier end of the aftersales spectrum these days (Kia monsters it with seven years/unlimited kilometres), however, with 12-month/15,000km servicing intervals (and the first five visits capped at $195), the Camry is nevertheless cheaper to keep running than the Mazda 6.

Mazda’s factory warranty spans a slightly more generous three-year, unlimited-kilometre period, but the 6 is potentially more costly to service thanks to more frequent maintenance intervals of 12 months/10,000km and a price scheme that alternates from $305 to $333 for each service. 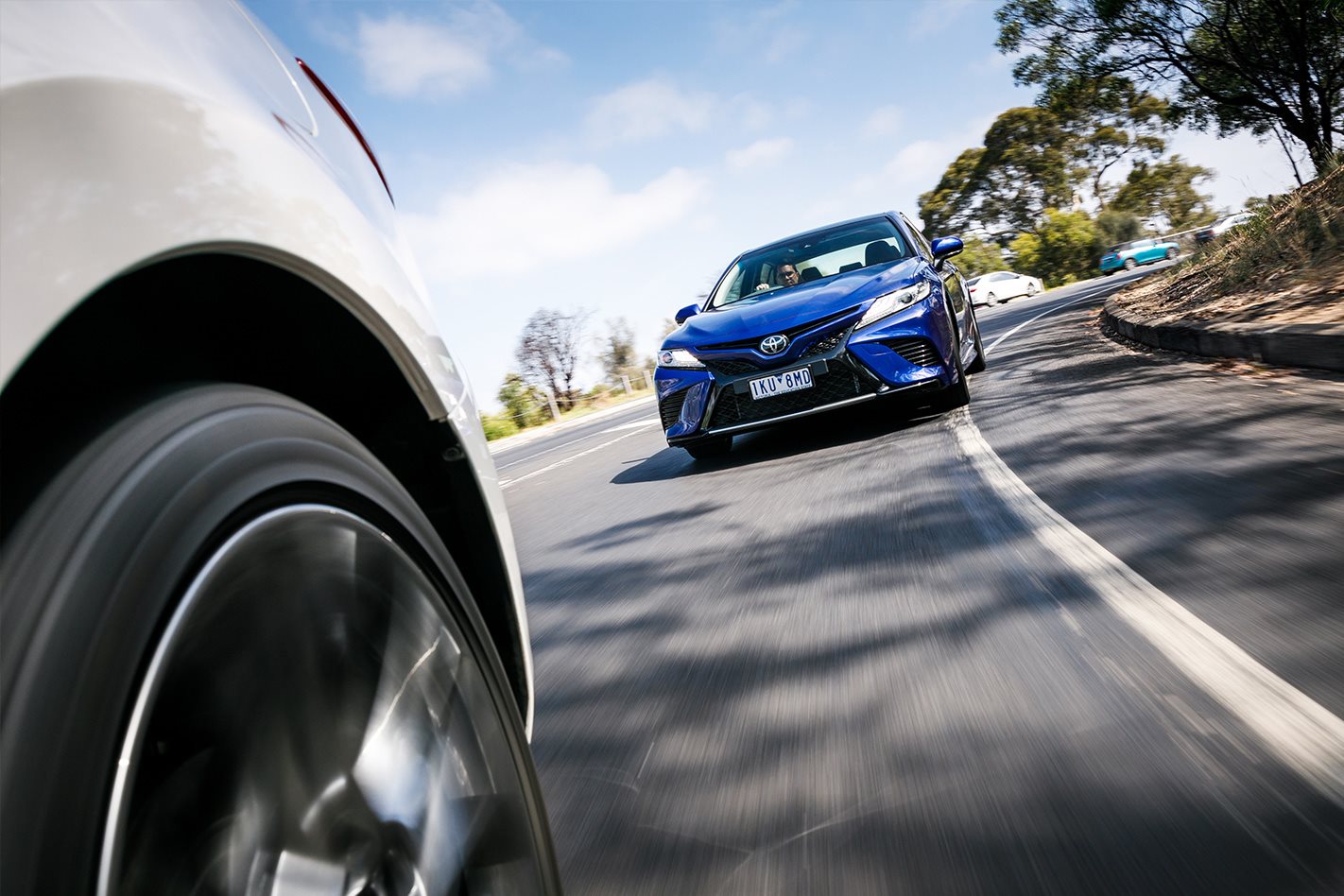 The Camry SL’s well-rounded nature and significant improvements in handling, quality, equipment and size sees it edge ahead of the Mazda 6 GT in this two-way, yet even though the Camry is a much younger design that’s not necessarily the conclusion we were expecting.

The 6 remains a great-driving car – and a superbly efficient one too - but is that so important in a segment that puts greater importance on value and comfort? What’s more, the Camry doesn’t trail all that far behind the Mazda 6 when it comes to dynamic performance, and that may surprise a significant chunk of you. For all of the above, the Camry takes home the win. 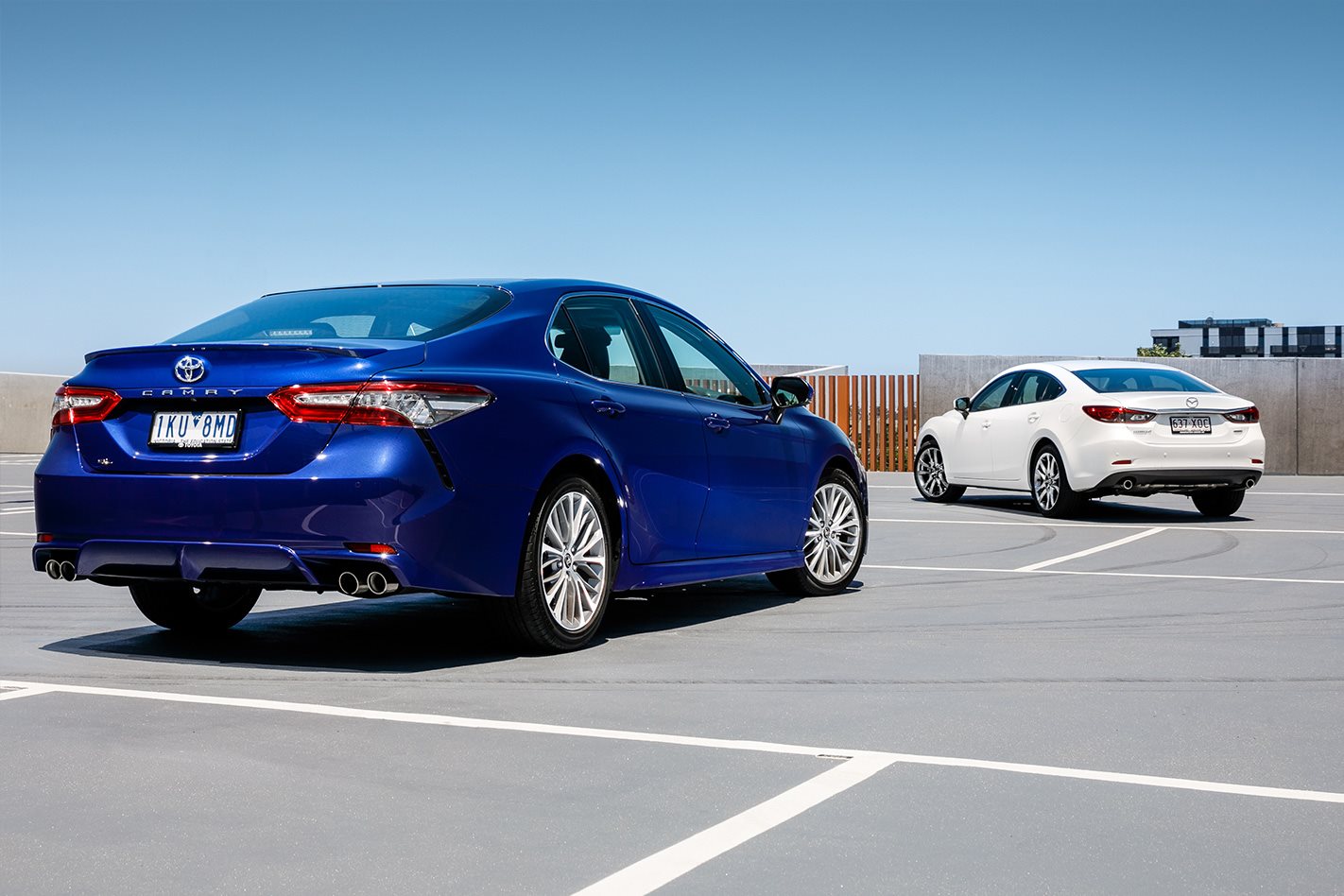 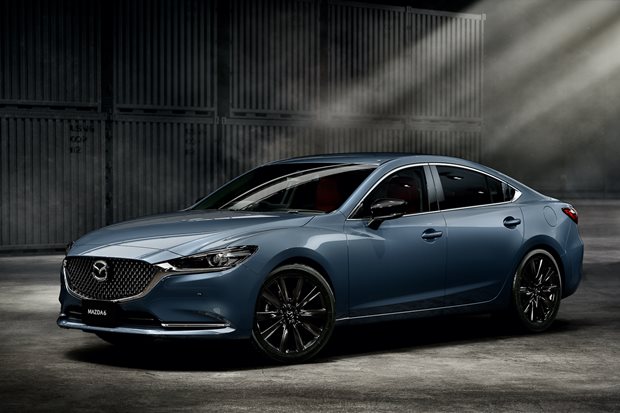