Damn Toyota, and damn the Prius. The poster car of hybrid technology just won’t go away. Alongside it in the greening 2016 new-car landscape there have never been so many options to tempt those hoping to eke another few millennia out of Mother Earth.

Some are bland and underwhelming (take a bow Mitsubishi for the Outlander PHEV; and Porsche, you can do better with hybrids) while others are genuinely exciting and enticing, such as the COTY-winning BMW i3. 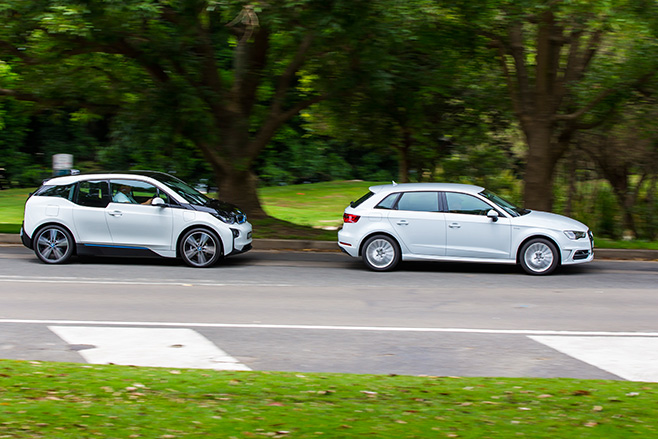 It’s the Rex – or Range Extender – version that finds us fighting over a shopping centre charging point with the Audi A3 e-Tron. The two aren’t direct rivals – the Audi is a modified A3 while the i3 was created by a secretive do-things-differently division within the German car giant – but each is trying to tease circa-$70k from early adopters eager to wean themselves off an addiction to premium unleaded.

Park your money in the Munich corner and you get a peculiar looking four-seater with rear hinged back doors. The body is carbon fibre making for a lightweight 1240kg frame – and that’s when fitted with the two-cylinder 647cc scooter engine that is a built-in generator. The unpainted matte finish of the grey-ish carbon is an authentic reminder every time you open the door. 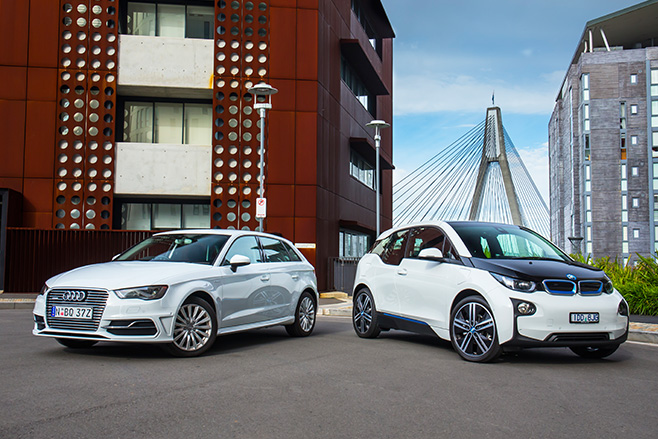 It’s a $69,900 spend, and for that you get sat-nav, some leather, reversing camera, rain-sensing wipers and parking sensors. There’s also a huge 10.25-inch screen and digital radio tuning, while the ConnectedDrive systems is a neat way to monitor the car via a smartphone app (you can even unlock the doors).

From Ingolstadt the A3 e-Tron trumps that with dual-zone ventilation and the same spread of sat-nav, reversing camera, parking sensors, digital radio tuning and leather trim. But it misses out on the BMW’s auto wipers, and the lack of a USB input is inexcusable (it’s circa $100 for a USB adaptor in the Audi-specific plug). 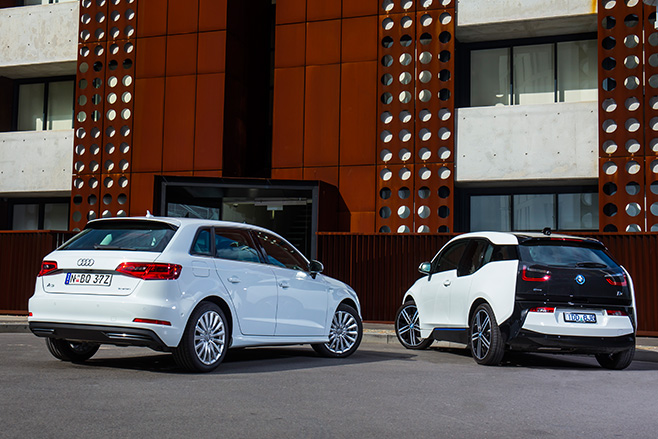 The Audi prises back marks by leaving more in your bank account, courtesy of a $62,490 sticker. For that you also get a wallbox fast charger installed at your home.

It’s an early tick to the Audi, then, something backed up with space. The Audi A3 body – which shares its MQB underpinnings with the Volkswagen Golf – liberates another seat in the rear, albeit for the skinnier in society. Rear seat leg room is also more palatable, while the boot will swallow more than the Beemer’s. 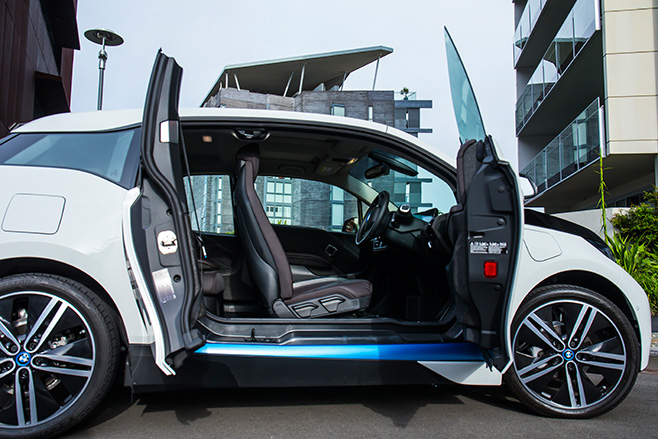 That said, the i3’s pillarless setup makes sliding legs into the higher-riding pews surprisingly easy. The BMW’s funkiness continues inside with the materials, with bamboo wood and furry-looking dash plastics an interesting aesthetic touch.

Yet the Audi looks cleaner and more clinical; its unique dash displays and “EV” button the only giveaways the e-Tron is hiding some tricky tech.

Hit the road and the BMW quickly wins back points. The steering is super direct, and the super tight turning circle makes city prowling a snip. But the 45/55 weight balance leaves little over the skinny front tyres, which quickly degrade into understeer on the limit. Bumps aren’t the i3’s friend, either. There’s short suspension travel that can have it rearing angrily.

The Audi is more predictable, if lacking flair. The steering is vanilla, adding spice once Sport mode is dialled into the Drive Select button, and there’s decent grip, while mid-corner bumps aren’t nearly as much of a wild ride. 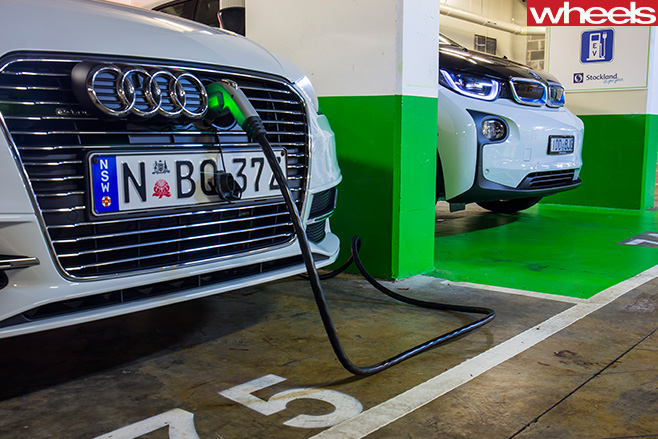 Propulsion is from a 1.4-litre TFSI engine delivering a familiar 110kW/250Nm thrust. But it’s the 75kW/330Nm electric motor that accounts for most of the muscle. That torque, in particular, makes for fantastic everyday usability, shuffling the Audi along nicely.

Just don’t push the accelerator all the way to the firewall or you’ll wake the petrol engine when you may not want to. If you did, though, the e-Tron pulls out both guns to deliver 150kW and 350Nm. On the surface it looks like an easy performance win to the Audi, but at 1540kg it’s not light, and acceleration really only starts to out-do the BMW once you’re in licence-losing territory.

There’s also plenty to love about the BMW’s drivetrain. Unlike the Audi, the electric motor is the only thing driving the wheels. Its 125kW electric motor punches hard with 250Nm the second you stab the accelerator and in the i3’s diminutive frame it makes for delectable acceleration. The i3 is entertaining, brisk even. 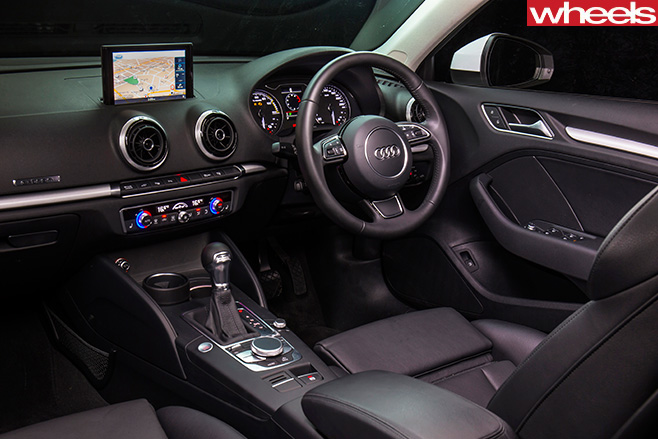 Where the BMW loses out is when you deplete its batteries. That two-pot 647cc scooter engine in the rear adds a non-sexy thrum to proceedings, with revs increasing up hills as it feeds enough electricity to the batteries. Find a hill long enough and the engine won’t up to the task, so power drops substantially; you’ve only got the engine’s 28kW (less, once you factor in losses) to work with in that scenario.

Indeed the BMW makes less sense the further you take it from its next charge. But in everyday driving that’s typically about 120km, triple that of the Audi’s electric-only range. For most urban motoring it’s more than enough.

And people aren’t shopping these cars to do the Big Trip. Sure, they can do it, but they’re more about zapping around town and consuming electrons rather than fossil fuels. 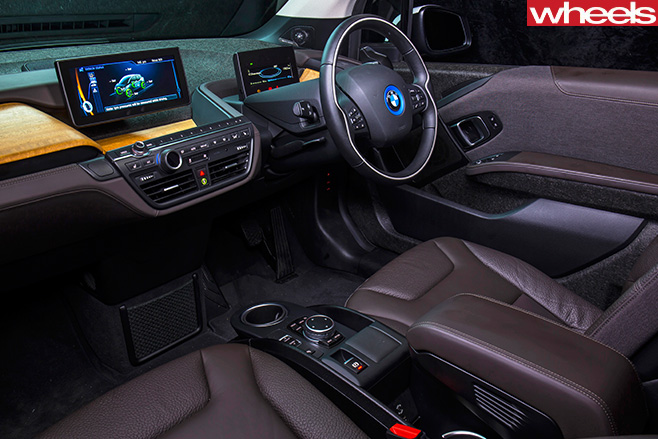 The Audi does the job fine and it relishes a challenging road. Plus, it could easily serve as your only car, albeit one that hides its cleverness behind a bland A3 facade. It also sets a new hybrid benchmark, with refinement and smoothness others can’t match.

But there’s an ordinariness to its personality that’s out of step with its high tech ways.

The BMW does it with more pizazz and flair – and, importantly, more electric range. It oozes innovation and demands a second glance. It looks and feels like a science experiment at every turn, but one that has gone right.

As an object that waves the environmental flag laced with futuristic tech it trounces the Audi. And it shows just how far the green race has advanced since those early Prius days.