Despite rolling on smaller, chubbier-tyred wheels than the Mazda, the Honda’s relatively firm spring and damper rates result in a busy low-speed ride. However, it smooths out at about 70km/h, leaving occupants to appreciate the excellent noise suppression and isolation of vibration and harshness, which is more refined than the CX-5. 15/20

A lack of dynamic talent undid the CR-V’s hopes for a decent COTY showing, but the chassis is well-behaved and satisfying enough on the school run. The strut front/multi-link rear suspension keeps the body flat and poised at seven tenths, and steering is responsive and well-weighted beyond a vacant zone around straight-ahead. 14/20

Click here to read the full range review of the Honda CR-V.

It’s a mix of materials – premium and cut-price – but the CX-5 cabin overall is nicer to touch and behold, with a more classical design and a clearer central screen. Lack of rear air-con vents a miss, but rear compartment roomy. Rear 40/20/40 seat more versatile and has similar fold-flat system, though 403/1560L boot is less generous.  16/20

The CX-5 matches the CR-V’s 2.2-litre capacity, but is a twin-turbo (a fact Mazda doesn’t emphasise, perhaps due to connotations of thirstiness). It produces 129kW and 420Nm (at a low 2000rpm), grunts through a six-speed auto and hauls 87kg less than the Honda, delivering seamless thrust and broad-for-a-diesel power. 18/20

The CX-5 is quieter than other Mazda models. Putting the cabin decibel level in context, it’s hushed enough that you can hear some wind rustle around the exterior mirrors at highway cruise speed. But despite the Mazda’s bigger 19-inch wheels and low-profile tyres, the ride is more absorbent and offers the dynamic edge. 17/20

“Excellent dynamics (and not just for an SUV)” reads our Showroom summation, and it’s true. The CX-5 is genuinely fun to punt, so much so that you’ll forget the sprogs are in the back. However, the steering ­– ordinarily fast and precise – can load up quickly during brisk cornering, making it our only beef with dynamics. 17/20

Click here to read the full range review of the Mazda CX-5.

Honda’s CR-V, with its thoughtful cabin design and superior cargo space, levels with the more premium-feeling CX-5 in terms of interior design and versatility, while the Mazda’s tallies under the headings of performance, ride and handling sum up the CX-5 diesel’s strengths – few SUVs can match its smooth-torqueing engine and sporty chassis. The Mazda goes harder than the Honda. It also has the potential to be more economical, but it’s difficult to resist its surging twin-turbo mid-range and stay light-footed, so they end up being very close at the bowser. It’s a pity neither brand offers a turbo-diesel at base model level because both engines shade their atmo petrol counterparts. However, in this flagship fight, it’s a clear win to Mazda’s CX-5 Akera. 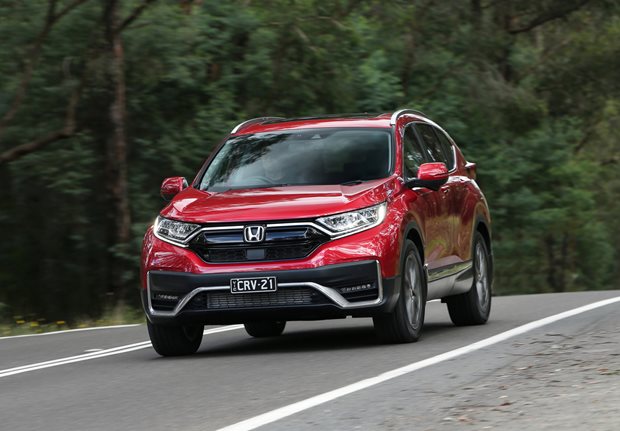