It’s here. That part of the year when Aussies go AWOL while the days are long and the weather’s warm, and take pause to reflect.

From the Wheels banana lounge, I’m pondering the things that were awesome about 2020. Erm, spending more ‘quality time’ with the family? A new normal that did away with rush-hour and the need to trouser-up, like… ever. The welcoming of a pricey pup into your pack, minus the literal teething problems. And now, with 2020 confined to the rear-view, hopefully never hearing the expressions ‘new normal’ or ‘home schooling’ ever again.

Just five years ago, a comparison of flagship soft-roaders from our brands here wouldn’t feature half the good stuff today’s iterations do, in part because some of it was yet to be invented, but mostly because the SUV stakes today are damn high. 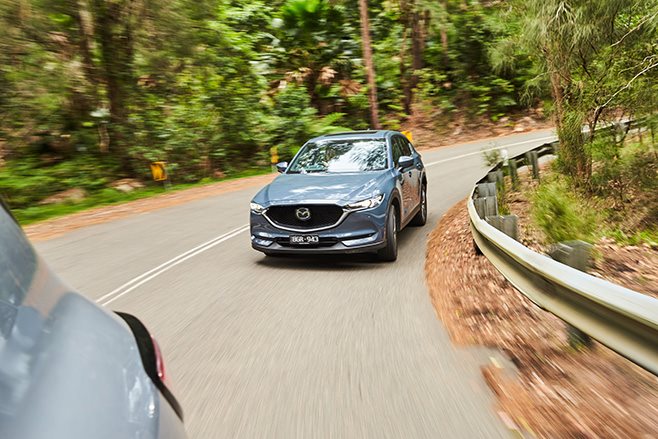 Thinking back further, to a decade ago, when we were still bemoaning that the SUV looked like it might catch on – despite making the average station wagon feel like something Colin Chapman himself would happily cop – the safety spec topped out at ABS and airbags. ESC if you were lucky. (At least Mr Lotus would be familiar with the level of occupant protection.)

Yep, as we head into a hopefully way-better 2021, we’ve got it pretty good, in the car department at least, compared with the mums and dads before us. Pore over the spec-sheet details and you work out that it’s quicker to note the things you miss out on.

Same goes for the brief list of features found in one but not the other. The $49,590 (plus on-roads) Escape Vignale AWD gets a panoramic roof, while the $50,830 CX-5 Akera Turbo has a standard-sized sunroof. And the Mazda gets a powered passenger seat while the Ford’s is manual. 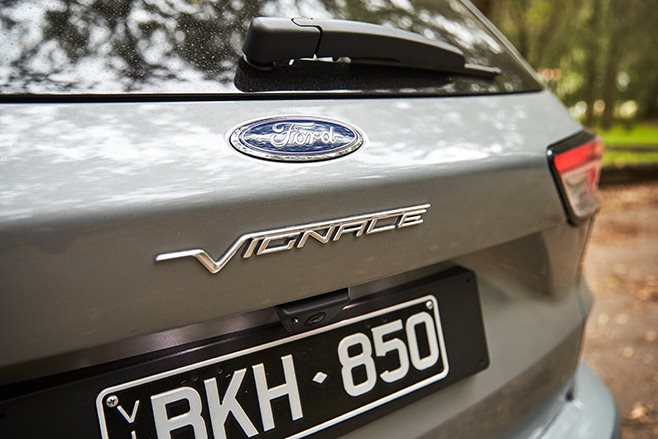 As well as the convenience, luxury and safety gear that makes 2020 iterations so much more desirable than their predecessors, there are drivetrains that were once firmly WRX, not family wagon.

Fewer herbs from a bigger engine? Yep, but the Mazda runs on 91 RON while the Ford demands 95. Put 98 in the Mazda and, says its maker, it will pip the Ford by a kilowatt.

While they’re both hugely flexible as well as surprisingly rapid, the Mazda outdoes the Ford when given a bootful from a crawl, where it’s quicker to summon a more generous reserve of boogie. Meanwhile, the Ford can, in the same situation, feel as if its smaller and peakier mill is a slight mismatch for the SUV-shifting task. 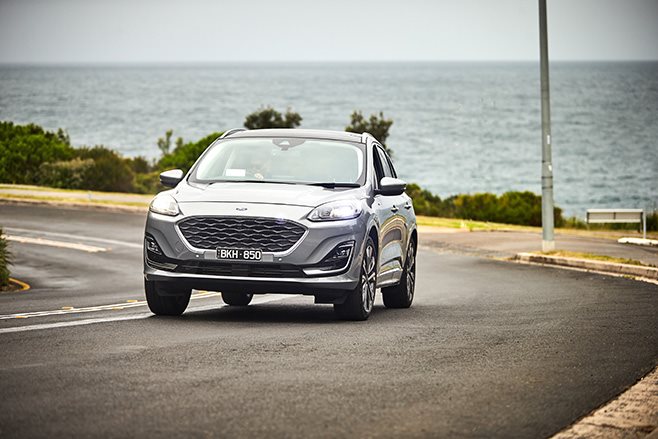 The Mazda sounds better doing it too, segueing from politely mannered to a perfectly judged throaty growl, where the Ford’s tune is less soulful.

The Escape’s eight-speed auto cedes some smoothness to the Mazda’s largely slick and intuitive six-speeder. The Ford SUV can lurch when attempting gentle low-speed manoeuvres.

The ADR combined cycle fuel numbers of 8.6L/100km for the Ford and 8.2L/100km for the Mazda hint at a decent performance-economy balance, with the urban and highway extremes suggesting a real-world school-run thirst in the low teens and sipping well into the single-digits on a trip up the coast.

During most urban driving, the feature-rich, well-finished cabins signpost their flagship SUV status as much as the presence of more than ample shove. For a while now, newly released Mazdas have had this curious ability to usher in a fresh era of cabin finish and refinement, before being retrospectively graded down just in time for an all-singing successor to arrive.

Well, the Akera isn’t newly released – the CX-5 line-up is due an update in the first half of 2021 – yet it feels pretty classy to us. Neatly stitched and trimmed soft-touch dash, console and door trims and Nappa leather upholstery were not always the stuff of mainstream family cars. 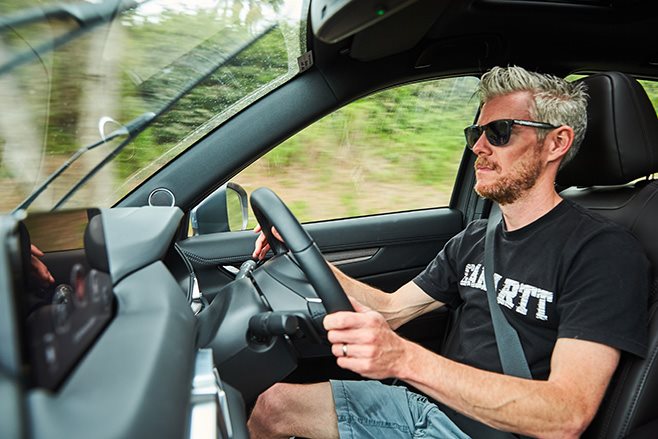 The virtual instruments look classic and futuristic at the same time, with their crisp graphics encircled by silver trims, and the smooth leather wheel with intuitive button layout provides a similar impression.

But the seating is a game of two halves. The Mazda’s front pews look and feel great, with a near-ideal bolstering that holds you in, without feeling unnecessarily sporty. But in the back, a lower seat base than the Ford promotes a slightly less comfy position, though also helps create legroom by pointing knees upwards more than forwards.

This, with a shallower glasshouse than the Ford’s, also makes the cabin feel darker and less spacious. There’s decent legroom in the CX-5 and a bit more headroom than the Ford, thanks in part to its non-panoramic roof.

The Ford’s sizeable sunroof is one of many design elements that add up to a brighter, roomier-feeling cabin, along with a lower-set dash-top, lower beltline and generally generous glasshouse.

The Ford’s front-row pews look less inviting than the Mazda’s and prove both less comfy and less supportive. However, I suspect it’s horses for courses. From talking to other testers, seems the Escape is designed for broader folks, while the CX-5 suits skinnier types.

There’s a similarly solid attempt in the Escape at creating class through stitched-trim coverings and leather upholstery, but while the CX-5 targets classy the Escape aims for futuristic. A slightly iffy execution sees the virtual instruments look a touch unsophisticated, while some of the low-level plastics feel it. 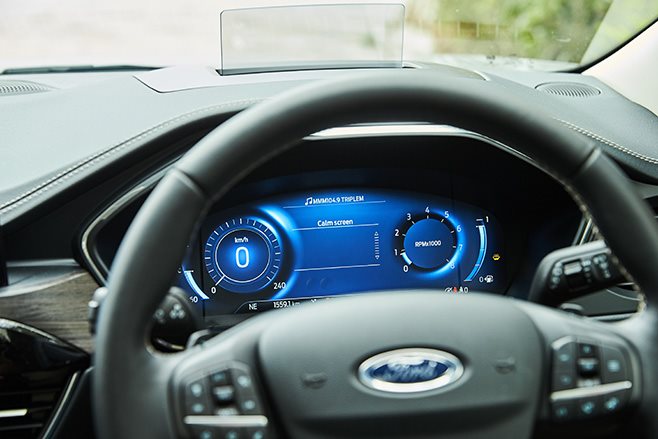 The Escape’s rotary gear selector scores marks for cool, but the Mazda’s conventional lever is easier to use when your mind is multi-tasking. The Ford’s wheel is sportily sculpted, but the button-fest invites mild criticism rather than finger-presses.

In a reverse of the CX-5 situation, accommodation is better in the back of the Escape than in the front, with a comfily padded and angled seat base that promotes a stadium-style view, and there’s plenty of legroom and good headroom. Entry and egress are better too, through a broader and better-shaped door opening.

That extra legroom is courtesy of a sliding rear seat base that allows the cargo area to be shrunk in the name of leg-stretching space. The wheelbases are actually almost identical, the Ford’s just 10mm longer at 2710mm.

Finally, they both get rear ventilation outlets, USB ports, outboard seat heaters and reclining backrests that will be handy for long trips.

Back in the front and I’m developing an alternative theory about why SUVs are so popular. You need one these days to see over the other SUVs. Can’t see through ’em, so join ’em.

However, this and the more commonly cited SUV advantages of generally good vision and easy entry, egress and loading will never argue with the laws of physics – raising a vehicle’s centre of mass fundamentally works against its handling. 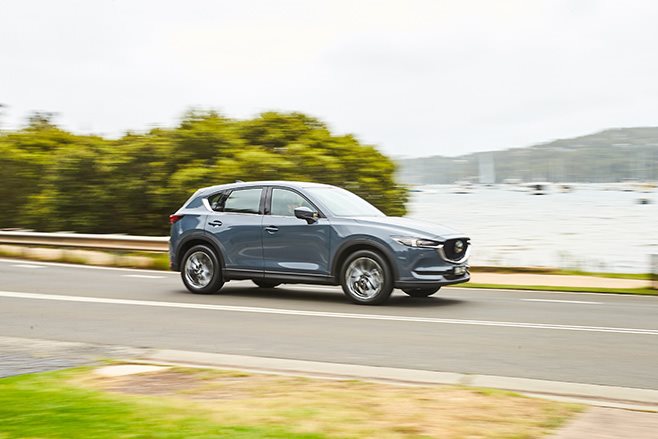 You may think this loses relevance in a firmly sporty SUV confined to suburbia or a gentle motorway cruise, and you would be sort-of right.

During the kind of driving the CX-5 is designed to do, it feels satisfyingly athletic, responding swiftly to the nice, tactile wheel and cornering with palpable balance and minimal roll, leaving the family wagon’s roots as a blunt, utilitarian tool a distant memory.

But push the CX-5 beyond brisk and the steering takes on a faint glugginess and the degrees of lean experienced are exaggerated because you sit up high. It’s not too difficult to get the Mazda’s Toyo R46s squealing in a tight corner – though it’s quite likely the tyre more than the chassis.

On the positive, the ride is firmly absorbent in the CX-5 and body movement is neatly contained up to tyre-squealing territory.

When hurrying the CX-5 – and, to a lesser extent, the Escape – the amount of squish needed at the brake pedal tells of the circa-1700kg being hustled. Be in no doubt that there’s less squish, squirm and slip in the Ford. It’s a decidedly crisper device.

It only takes a few corners to uncover the Escape’s quick, incisive steering. With fewer turns lock-to-lock than the CX-5 (2.5 versus 2.7) as well as a firmer suspension and shallower sidewalls, the Blue Oval SUV is always more eager to change direction than its rival. Yet the Ford’s steering is light and never huge on feel, and it remains resolutely vacant when loaded up. And you can really load it up. 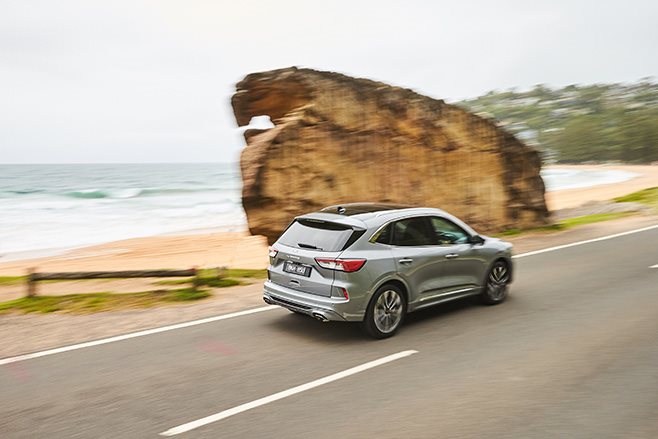 The Escape’s reserves of talent and grip have the CX-5 comfortably covered, with better (Continental) tyres. The Ford is possessed of a fundamental keenness and is capable well beyond the scope of SUV duties.

But the trade-off is pretty stark. The Vignale, on our test car’s optional 20-inch wheels and tyres, is taut to the point of terse. We wonder whether it’s a bridge too far given this is a quality you put up with all the time, while most will only revel in the handling capability occasionally.

There’s nothing quite like a straight-cut comparison outcome, but it’s not quite so clear here. It’s more a case of swings and roundabouts.

The Ford Escape Vignale AWD is a sharper, better handler, quick like the CX-5, with an appealing cabin that’s roomier and brighter, and comfier in the back. It’s also busier in the ride, a bit less responsive on the urban crawl, and not quite as cosseting in the front. 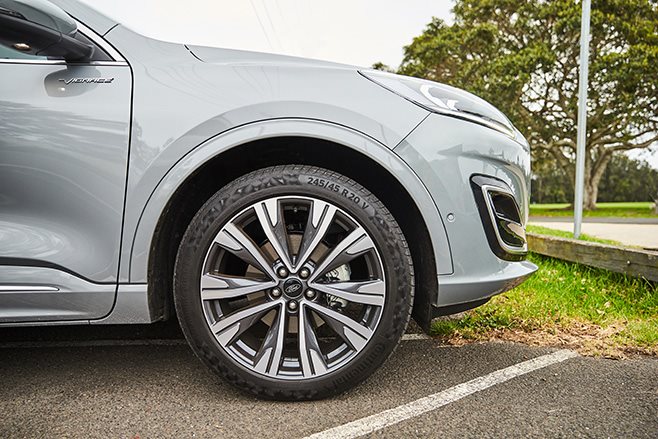 The Mazda CX-5 Akera Turbo AWD is decently comfy and agreeably sporty, with instant, low-down torque and a terrific note under load. It’s not as spacious or light-filled as the Escape, with its smaller glasshouse and standard-sized sunroof. But it’s a nice, classy cabin and the actual occupant space in the back is pretty close.

If this was a back-to-back of hot SUVs, the Escape Vignale would have it in the bag. But it’s not. It’s a contest of quick, flexible, attractive, inviting, safe and enjoyable turbo AWD, high-riding family wagons.

Not long ago, affordable vehicles designed to carry 2.3 little units (the 0.3 being a $7K Cavoodle) held nowhere near the sort of appeal of this pair. But at the end of the day – sorry, year – the all-rounder CX-5 Akera Turbo AWD nails the flagship family-wagon brief to seal victory.

Now, hand me another frothy, Jeeves. Anything other than a Corona. 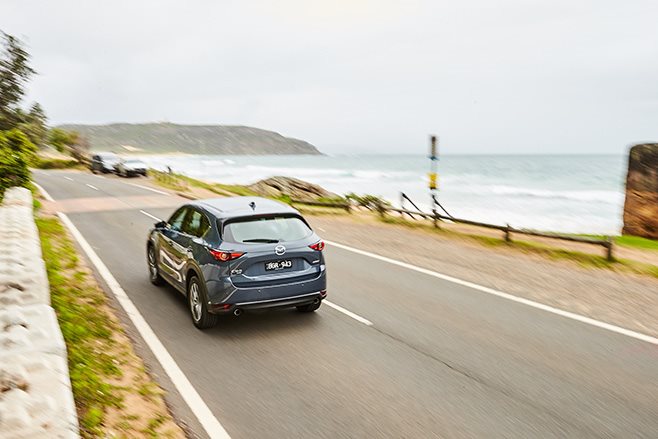 New ‘Zippo’ key replaces the slimline unit that Mazdas have used for a while. It is form over function, with small buttons on the edge and bulkier proportions in the pocket. CX-5’s virtual cluster features dynamic red dial marking at the speed limit – so simple and useful.

Nappa leather upholstery in ‘Dark Russet’ is a welcome break from default black. Dash-top infotainment display is set to grow from 8.0 to 10.2 inches with the incoming CX-5 update. Rear seatbacks fold 40/20/40 for a bit more versatility than Ford’s 60/40 arrangement. 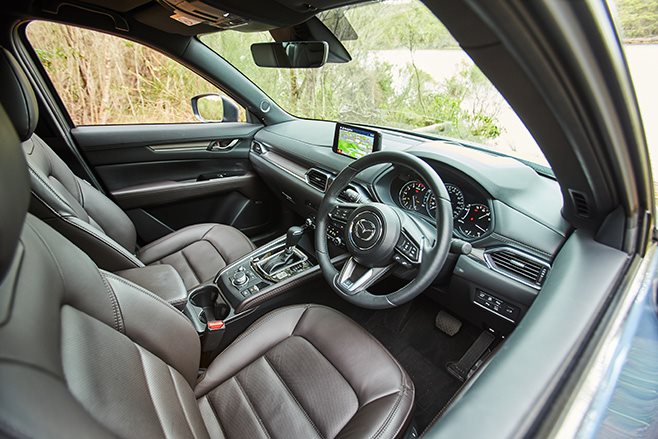 Escape’s head-up display projects onto a transparent panel that sprouts from the dash-top while CX-5’s is onto the windscreen – but both units are handy. Ford’s wide-angle reversing camera display is brilliant, bringing a sense of being able to see around corners and providing terrific confidence during manoeuvres.

The 12.3-inch virtual cluster brings flashy graphics with the selection of each drive mode. Love the white-stitched upholstery; not so much the big-grained dog-nose finish on low-level plastics. Chief criticism of busy steering wheel buttons is that cruise is where you would expect to find volume. 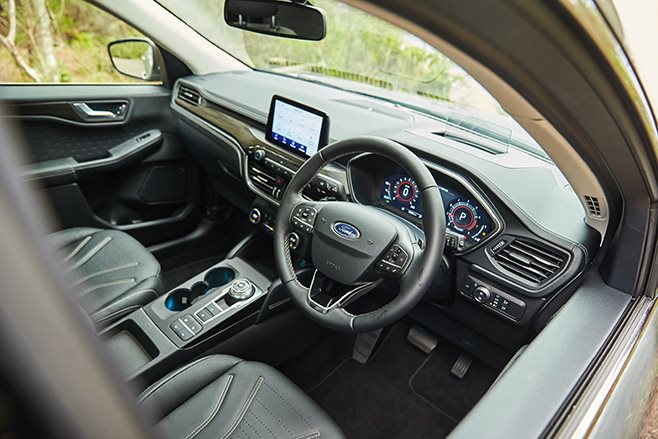 Mazda’s still unconfirmed CX-5 update is thought to be mild – a Turbo badge may be the extent of the exterior tweaks – but Hiroshima’s long-term play is just the opposite.

The next CX-5 could adopt the CX-50 nameplate to slot in with the CX-30 and forthcoming MX-30, a rear-wheel-drive/AWD platform, and petrol and turbo-diesel six-cylinder engines with 48V mild-hybrid and plug-in hybrid assist.

And here we were thinking donk downsizing was an irreversible trend. The sights, it seems, are set on Germany.