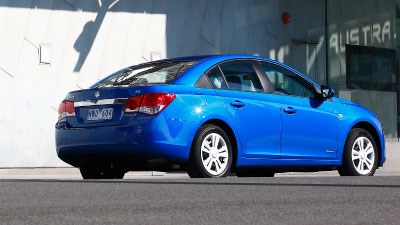 Ensconced in a meeting room on the second floor of Holden's glittering glass and steel HQ in Port Melbourne, I'm primed to meet the Cruze sedan - a small-car contender that's vitally important not just to Holden's future, but also more broadly to that of GM itself.


Despite Commodore retaining its place as the country's number-one seller, large-car sales continue to slide, and, perhaps ironically, the small-car segment is Australia's largest, claiming 23 percent of the market last year. It's a crucial segment in which Holden is under-performing; its current stable of Korean-sourced products nipping at the edges while the voracious Toyota Corolla and Mazda 3 bite off huge chunks.

The Cruze is also the one-size-fits-all sedan that GM is pinning its small-car hopes on in the massive markets of Europe and North America (where it's badged a Chevrolet), so it's a critical roll of the dice. And sitting here, surrounded by marketeers, engineers, designers and PR people, expectation hanging heavily in the air, I'm feeling decidedly outnumbered.

The tension breaks when Holden boss Mark Reuss strides into the room. A firm handshake and a few moments of small talk later and we're down to business. Suit jacket off, the forthright and friendly American exec waves away the offer of a scripted presentation and walks me around a Cruze CDX, which is conveniently parked in a corner of the room. After a split second spent wondering how Holden managed to get the car in here, I'm snapped back to attention as Reuss starts downloading the sort of micro-level detail usually reserved for the most earnest of car company boffins. He rattles off this encyclopaedic knowledge the way other blokes reel off the weekend's footy scores. "See these engine mounts?" he asks. "We swung the power cube [he means engine] from a chain to find its moment of inertia, then mounted the engine along that torque axis to optimise NVH reduction." Walking around and pointing to the body side, Reuss adds, "I challenge you to find a seam weld on this side; we used copper plating on the weld tips..."

The bloke obviously knows his stuff; as well he should. Before taking the reins at Holden, the former Detroit-based engineer was in charge of 'vehicle integration' for Cruze on a global scale. All the design, engineering and development teams ultimately reported to him.
Reuss knows every nut, bolt and torque axis of the Cruze. His attachment to the car is obvious, and personal. Like others at Holden, he's at pains to point out that it's something other than just another cheap Korean import. This, despite evidence to the contrary in that it's being sourced from a plant in South Korea.

But the Global Delta architecture that underpins Cruze (as well as the Volt hybrid and next-generation Astra) was a global effort, born in Germany and designed to give GM a range of new models capable of achieving sales of 500,000 units per year worldwide. The architecture's importance to a failing GM cannot be overstated, a fact attested to by the $5.5 billion of rapidly evaporating cash reserves that the project consumed. By way of contrast, Holden's VE Commodore/Zeta program ran up a $1 billion tab.

Cruze is the very first car line to be built off the architecture, with GM DAT in Korea handed responsibility for the car's exterior and interior design, along with calibration work on its Australian engines and transmissions.

After Reuss's introduction, I slide down into the passenger seat of the top-spec CDX model on display. It's a clean, classy effort and the attention to detail is obvious: double-stitching on the leather seats, soft-touch plastics, and buttons and dials that push and rotate with a decidedly un-Korean feel. The only 'cheap' inclusions are the hard, grey inserts framing the gearlever and air vents. No complaints regarding build quality, either, with tight panel gaps and a generally robust feel.

The instrument cluster is clean and legible (it always amazes me how many manufacturers manage to get this most basic of design functions wrong) and the neatly integrated centre stack houses the infotainment display, audio and HVAC controls. Factor in the fantastic driving position (helped by the inclusion of a steering wheel adjustable for height and reach) and well-bolstered sports-style seats that are comfortable and supportive in equal measure and it's clear the folks at GM DAT have upped the ante.

The rear seating, however, doesn't match the space or comfort level enjoyed by front-seat passengers. Both base and backrest are a bit too flat and hard and foot-room is tight, but overall space and comfort are still competitive.

The designers obviously thought long and hard about making the Cruze user-friendly, with plenty of cubbies and storage spaces. The rear seat incorporates a fold-down armrest with twin cupholders, while the centre console up front offers an auxiliary power outlet and dual cupholders. Stump up for the CDX model and you even get heated seats. The standard six-speaker stereo is also more than adequate; just don't expect it to transport you straight into the moshpit at a Metallica concert.

Cruze will be sold in CD and CDX spec-levels, with a 104kW/176Nm 1.8-litre petrol or 110kW/320Nm 2.0-litre turbo-diesel four-cylinder on offer. Those engines can be hooked up to either a five-speed manual or first-in-class six-speed automatic transmission (which makes the four-speed auto still offered in the Commodore look decidedly ordinary). The turbo-oiler is the same VM Motori-developed, common-rail unit under the bonnet of Holden's Captiva SUV, while the 1.8-litre petrol is a development of the powerplant that is available in Astra.

Having left Reuss and his minders behind, I'm soon slotted into a Cruze CD 1.8 automatic, dodging trams and ducking down the cramped laneways of inner Melbourne. In this intensely urban application, with its stop-start conditions and traffic light grand prixs, the petrol-fed four is quickly exposed as a potential weak link.

Despite being overhauled with continuously variable intake and exhaust camshafts, this engine (a Family I-derived donk) dates back to 1996, and feels every day of its 13 years. It's sluggish at low revs, belying the claim that 90 percent of its 176Nm is available from 2200rpm through to 6200rpm. Flex the right foot and response improves, accompanied by adequate pace, but also by a coarse, gravelly top end.

Calibration of the 6T40 six-speed auto also leaves something to be desired. Perhaps GM's Korean engineers are still on a learning curve, perhaps they're under instructions to maximise fuel economy. Whatever the reasons, this state-of-the art transmission doesn't feel quite right. The auto constantly reaches for the highest possible ratio, then flares and hunts between cogs at even moderate throttle applications, with the result that it often seems unsure of which ratio best suits your intentions. Fortunately, the slightly different gearbox hitched to the diesel donk (codenamed 6T45) offers a more sophisticated experience, sliding between gears mostly at the right time and exploiting the little oiler's broad slug of turbocharged torque. Below 1500rpm there's pronounced turbo lag, but once the gates open a smooth, muscular surge of torque rolls through.

Engine and transmission gripes aside, the Cruze is an effortless urban and highway runabout and keeps a tight lid on NVH intrusions. In freeway driving, mechanical refinement is outstanding, with barely a whimper or vibration transferred from engine to cabin, although road noise is dependent on surface. On smooth mix, it's whisper quiet, but on the coarse-chip bitumen so common in Australia, a dull monotone thrum is a constant companion. Ride quality is also somewhat of a mixed bag, the chassis soaking up urban corrugations like blotting paper, but jarring a bit over larger impacts.

And what of dynamics? Threading along a ribbon of tarmac, flanked by the blackened remnants of trees burned in the Black Saturday bushfires, Cruze's basic chassis balance is neutral and benign, the long wheelbase and broad tracks aiding stability, with both front and rear suspension working in harmony to deftly string corners together.

The CD's turn-in, on 16-inch wheels, lacks the crispness of the CDX thanks to its 17-inch rubber, although neither is razor-sharp. The steering, which feels slightly inert at centre, is accurate and weights up nicely; with a natural, linear response as lock is applied and just the faintest shimmy of kickback, even on cracked and ridged blacktop. Brake feel is also surprisingly good, although just a handful of strong stops sent the front discs out for smoko. The torsion-beam rear suspension can't match the finesse of the segment's dynamic front-runners (3, Focus and Golf). But despite the fact Cruze lacks involvement compared with these competitors, its well-judged chassis does exhibit a taste for the twisties.

What's more, its safety credentials are outstanding, with six airbags for all models, a reliable (if unsubtle) ESP system and a five-star ANCAP crash rating.

Yet, for all its winning attributes, Cruze ultimately lacks a bit of flair. Despite representing great value for money and being more than capable in key areas, as a driving experience it lacks the polish and refinement of VW's Golf, and the zest and dynamic sharpness of Mazda's new 3.

For pragmatic buyers Holden's new small car offers compelling showroom appeal, undercutting Corolla and 3 on price. But for the rest of us, Cruze ultimately lacks the spark that separates a good car from a great one. 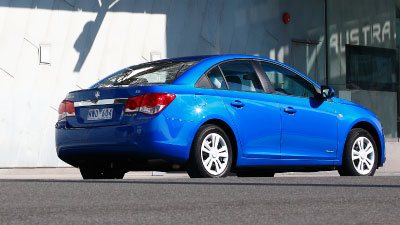 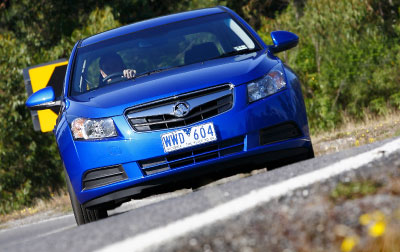 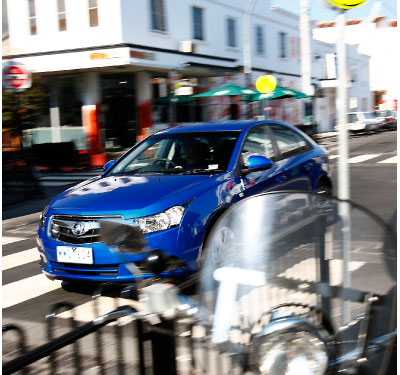 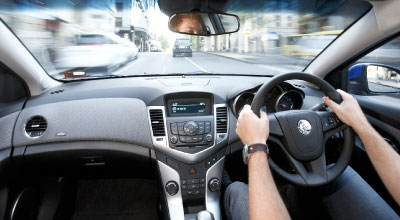