MELBOURNE based Herrod Performance has given the Mustang 500kW of grunt along with an elocution lesson.

A long-awaited, but more powerful, right-hand-drive Shelby GT350 Mustang alternative by Melbourne-based Herrod Performance, with sophisticated handling and a supercharged donk that yields a monstrous 500kW and 750Nm. The Aussie muscle car is about to become extinct, but Ford Australia’s big-selling American coupe is ripe for local tweaking and we want to see if this blown Herrod Performance version lives up to its impressive numbers.

MAIN RIVALS
The Tickford Mustang 500 and Aussie-made HSV Clubsport LSA both provide supercharged grunt for the same circa-$90,000 price tag.

THE WHEELS VERDICT
Despite injecting a massive power boost that beings joy to all the senses, Herrod’s significant modifications tame the stallion by giving it road manners and refinement to make it a better all-round, but bloody quick, ride. Minus: Barely a four seater

WE should be grateful that Aussies can finally buy a factory-built right-hand-drive Ford Mustang for a damn near gob-smacking price, even though it took half a bloody century to get there. But with Ford US having put the kybosh on building any right-hook Shelby GT350 versions for us muscle-car-loving folk, here is a ‘factory-aftermarket’ solution for anyone who finds that situation unacceptable. The Herrod Performance Ford Mustang GT.

As an official Ford Performance Parts distributor, Rob Herrod’s slick operation in Melbourne’s Thomastown knows a bit about making Mustangs meaner. And if you go by the figures, this supercharged 500kW-plus monster puts the official 392kW/581Nm GT350 in the shade when it comes to mumbo. No, it doesn’t rev to 8250rpm, but surely 7000rpm is enough? But not this six-speed manual Grabber Blue beast. An FR3 suspension pack ($2000) which incorporates completely new front strut assemblies, new anti-roll bars at both ends, and new rear springs, dampers, bushes and a different lower arm for the multi-link IRS arrangement all feature in this car, to brilliant effect. Plus it has a short-throw shifter ($950), a gorgeous GT350R Alcantara steering wheel ($850), matte-black 20-inch Momo rims with Pirelli P Zero rubber ($3900), and a bunch of other visual enticements to make it look nastier than a mugging at knifepoint. 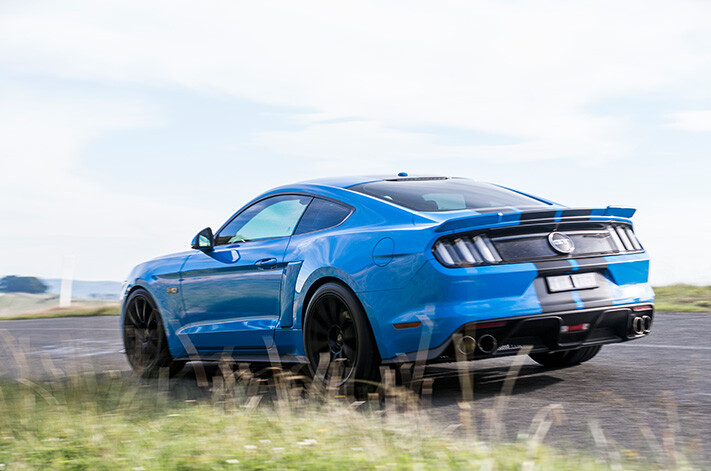 On the road, it’s a grower, building admiration with refined sophistication. Sure, this thing is seriously bloody quick, annihilating gears with rapid-fire intensity if you bury the right pedal, but it’s also an incredibly driveable and domesticated brute.

The 20-inch Momos don’t feel any heavier than the stock GT’s 19s, and the suspension changes actually improve the Mustang’s ride. There’s less of a reaction to road joins and vertical movement, making the Herrod car feel calmer, yet better controlled. For all its visual bluster, this is a seriously capable long-distance cruiser, backed by a super-tall sixth for some semblance of fuel range. Even fatter Pirelli P Zeros (265/35ZR20s up front and 285/35ZR20s down back) raise the grip threshold to contain the engine’s serious muscle, yet when the rear end does start to nudge wide, it’s progressive and clearly telegraphed. Brilliant chassis balance, too, undermined slightly by the Mustang’s somewhat remote three-setting electric steering system. The weighting in Sport mode might work in serious cornering, but it could definitely be more talkative.

And then there’s the drivetrain. It’s surprisingly docile in Chap-lap-type scenarios (insert local cruising strip here), without the drop in engine torque off the line that demands extra revs and clutch slip in the stock Mustang manual for brisk getaways. And there’s a glorious rumble around 2000rpm that fulfils every acoustic desire even at urban speeds. The stubbier shift action – weighty as it is – also slots home with greater satisfaction than stock, providing you’re decisive with the clutch. The flipside of all this is a superhero-esque mountain of muscle simmering away in the background, aching to annihilate the horizon. But that goes with the territory. What we didn’t expect is the Herrod Mustang’s sophisticated feel and its factory-fresh layers of polish. From its brake feel to its decent ride and easily accessible grunt, this muscle car has manners.