MEET our new-age ‘Rex’, a different flavour of Rex to the type we’ve been used to in the Wheels office over the past 20 years.

The BMW i3 REx does without its Subaru namesake’s all-paw traction and barking boxer engine. In fact, in some guises it does without an engine at all.

This Rex isn’t about tearing through forests; it’s more about hugging them.

It’s also the reigning Wheels Car of the Year, the first electric car to claim the coveted gong. There’s added pressure jumping into a COTY winner to evaluate it over an extended period. After all, as intensive as the COTY test is – seven days, 15,000 kilometres, 522 coffees and 79,000 lost arguments – there’s a chance my few months behind the wheel could end up not entirely agreeing with the 100-plus years of testing experience.

Still, it’s a challenge I’m prepared to take on.

First step was to come to terms with this thing. It is, after all, unique on the eye and not the most muscular of machines. The front tyres are just 155mm wide and with the steering on full lock they look ready to slice through a wedge of camembert. At least they’re shod on 19s. 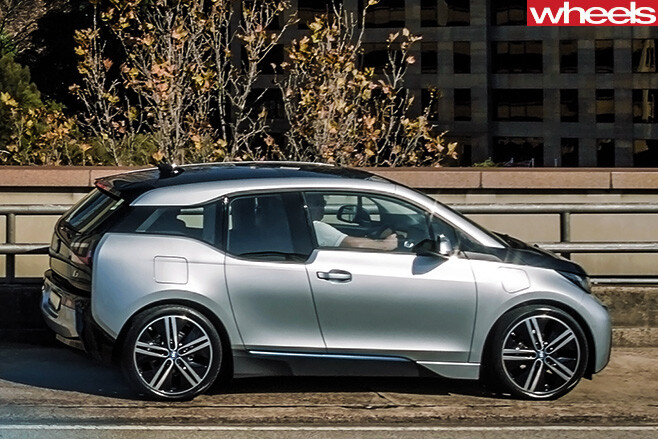 The window line looks like a lost game of Tetris, and from behind it appears roughly half as wide as most respectable cars.

So it stands out. And it’s futuristic. The blue tinges (remember, blue is the new green) and distinctive LEDs front and rear look more concept car than showroom star.

But it’s not until you fling the door open that you see the matte carbonfibre chassis, bamboo dash and scratchy plastic door trims that look as though someone’s forgotten to run it down the final trim line.

The i3 is certainly an acquired taste, but I’m a fan. It’s different and fresh, yet still has enough BMW flavour.

Most of the controls match garden-variety BMWs, with the occasional hiccup. No smart key, for example, something I learnt by almost tearing the door handle off on the assumption a luxury car costing $70K would have all the features fitted to Japanese cars at half the price. So much for the future of motoring.

Big tick for the Connected Drive system, though, which allows you to monitor the car using a phone or tablet. There’s some dicking around to get it all hooked up, but once done it makes for a fantastic party trick. Fire up an app and I can remotely monitor how much charge remains, locate it on a map, work out where the next charge is, even flash the headlights or unlock the doors. 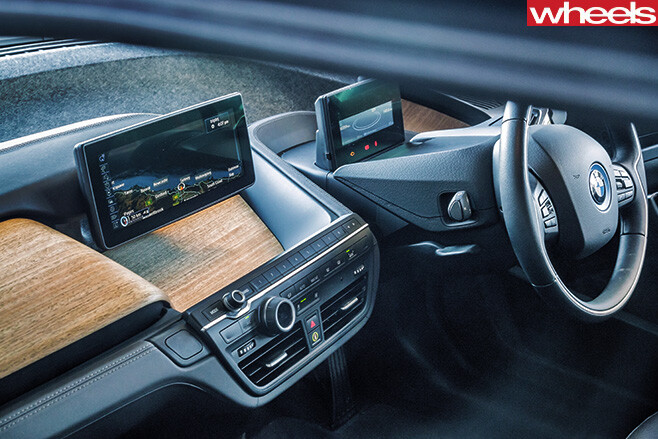 My steed being the Rex, it comes with an engine for the reassurance of being able to visit one of those olde worlde petrol stations if I really need to travel beyond the 100-plus kays of 240 volts.

The regenerative braking is a bit of fun, feeling like you’ve dumped it into second gear at 100km/h. But if you want a quick rest of your right foot, it can lead to passenger head noddies. My better half was concerned she’d be rear-ended, such is the aggression of the lift-off braking. For the most part you can get away without using the brakes, although the brake lights still illuminate. To cars following, it can make you look like a Sydney cabbie – from 2040.

No complaints with the performance. The 250Nm of thrust is addictive and something that shocks much fancier machinery. And that’s the bit I’m most looking forward to
over the next few months.

The price of extending

THE i3 is available as a pure electric model (BEV) or a range extender (REx). Mine is a REx, with a two-cylinder 647cc scooter engine that acts as a generator if you run out of charge. The additional 120kg reduces the performance (the 0-100km/h time extends from 7.2 to 7.9sec) and lops 20km off the claimed electric range (190km versus 170km). Yet the i3 is no great seller. Only 110 have been registered in its first six months on sale here, though that’s more than BMW’s forecast annual tally.

BMW’s i3 may be all tree-hugging and in touch with its bluey-green side, but it still adheres to that classic BMW rear-drive layout (even though the 2 Series Active Tourer put an end to all that). And while the weight distribution isn’t the 50/50 ideal BMW has touted for decades, the 44/56 rear bias at least swings it in the direction of an F1 car rather than those horrid front-drivers BMW spent so long deriding. That’s because the engine sits in the rear, alongside the electric motor.

Read part 2 of our BMW i3 long-term car review.