“ARE we there yet?” It’s a phrase parents never like to hear but inevitably do. Often.

With the BMW i3, you are just that little bit closer to the piercing shriek of a three-year-old. In fact everything in the cabin of the diminutive electric car is pretty close. BMW describes it as a “complete new sense of space”.

Such confined quarters have their benefits, though; not far to reach to ban an argued-over iPad or pick up a wayward Lightning McQueen, for example. Plus there’s the feeling of closeness to the family, which is great for the first hour or so but wears thin approaching the outskirts of town having listened to the toddler car-cry most of the way.

So began our attempt at turning the COTY-winning “future of urban mobility” and “electrical revolution” into a family car.

Once you’ve screamed “Stop kicking the seat!” for the 17th time and accepted the fact everything is a lot closer, there’s plenty to like with the i3. Getting kids in and out, for example, thanks to the ‘suicide’ rear doors. Given that the B-pillar and seatbelt open with the door (don’t do it when the person in front is still belted in!), it makes for a broad opening and it’s surprisingly easy to lash a kid. Less appealing is the cubbyhole you create for yourself with both doors open in a car park.

Speaking of parking, a big, bright colour screen gives clear reversing camera vision, while the view forward is great. A stubby bonnet reinforces the shortness of the carbonfibre machine. 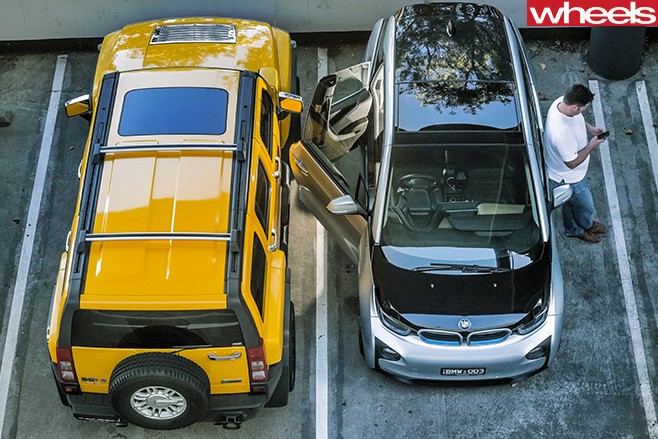 But it’s the turning circle that makes the i3 such a winner. The official claim is 9.86m but it feels about half that, something that also helps with plucking your way into ridiculously tiny parking spots. I found myself doing U-turns just for the fun of it.

My travels also involved the testing West Head Rd through Ku-Ring-Gai Chase National Park near Sydney, with its hills, dips and bends. It’s a challenging road and one that brings the i3’s suspension undone.

It’s not that bad dynamically; ultra-direct steering points the nose faithfully, but pitch too quick into a corner and it’s a frenzy of stability control graunching as it quickly rights the leaning wrongs. The big challenge, though, are bumps, exacerbated by the short wheelbase that results in plenty of pitching. It bucks and weaves more than our Prime Minister.

Thankfully the torquey motor punches hard – anywhere – and maintains the i3 smile factor.

Going the extra yard, one meter at a time

TRIP computers are often optimistic, so I Googled “electricity meters” hoping to find some wunder-machine that could count every electron flowing into the i3’s battery pack. Turns out buying one of these gadgets is tricky. Prices range from $20 to hundreds.

I chanced my luck with a mid-ranger that online forums suggested was vaguely accurate. Fail! Some charges my whizz-bang-o-meter suggested it had stuffed in half the electricity the car thought it used. Occasionally it was out the other way, by up to 30 percent.

Read part 1 of our BMW i3 long-term car review.