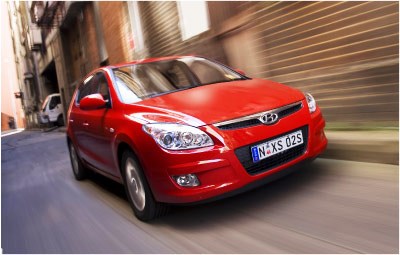 First impressions? Looks sharp, feels soft. Oh, and it smells "plasticky" inside, according to my astute teenage daughter.

The new Wheels and www.wheelsmag.com.au long-termer is a relatively odd choice. Yet it's a logical one. And the first Hyundai. And, to the great relief of my mountainous son, not a Getz.

Because our Shine Red non-metallic i30 is an SLX, it rides on 16-inch alloys shod with 205/55 Kumho Solus tyres. Some i30s get Hankooks. Commendably, there's a full-size alloy spare under the cargo floor.

The top-shelf SR isn't available with the diesel engine, effectively making our SLX the top-spec diesel i30.

Like all Australian-market i30s, ESP now comes standard and the cars are well equipped and boast five-star safety. Driver and passenger airbags are standard across the range, but the entry-level i30 SX doesn't get the side and curtain 'bags that come with SLX and SR variants. Our five-speed manual SLX is $26,390. The four-speed auto is $2000 extra.

Other car-makers might argue that turbo-diesel power isn't a value proposition in a small car. But Hyundai claims 4.7L/100km fuel economy — almost hybrid-good, and at a cheaper purchase price. Of course, diesel is more expensive than petrol, so during our time with the car, we'll learn, among other things, how much pump price affects the bottom line.

The i30 has been selling well enough since its October, 2007 launch. But Hyundai Australia's marketing boss, Oliver Mann, says he could've sold a lot more if there hadn't been both supply and factory labour issues in Korea: The car proved popular in Europe, there was trouble brewing at the factory, and a new i30-dedicated plant in the Czech Republic had delays coming onstream.

The new Czech plant started building cars in November this year, but we'll still get Korean-built i30s. At least, Mann says, the pressure's now off Korea, and supply lines will be freed. He's cautiously optimistic about selling more cars here.

So, brief first impressions are mostly good. Australian-market i30s are tuned, Mann says, with input from Hyundai Australia. Yet our car's low-speed ride already appears to be fairly choppy on bumpy urban roads. And neither the gearchange, nor the steering, feel as responsive as the recently departed Skoda Roomster long-termer.

The Hyundai-designed and built engine feels strong. Maximum power is 85kW at 4000rpm. Max torque is 255Nm, developed over a fairly narrow 1900-2750rpm rev range. And the car itself is a relatively heavy 1399kg.

So no definitive verdict on our new i30 long-termer just yet, but all in good time. 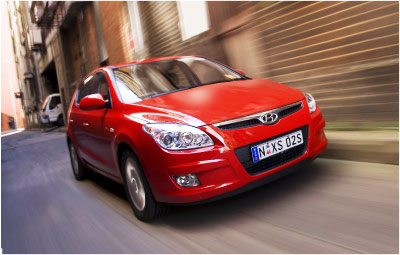 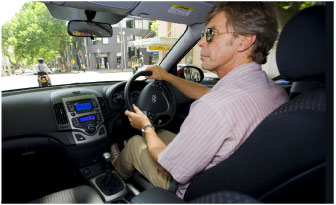