What's in the garage?

The N emblazoned on the i30’s rump might have been the headline news at the hatch’s launch, but the real story was Hyundai’s snaffling of a man known for another letter – the letter M. Albert Bierman, famous for heading BMW’s go-fast M Division, was tasked with fronting Hyundai’s first true performance foray. Hindsight tells us it was a good idea. 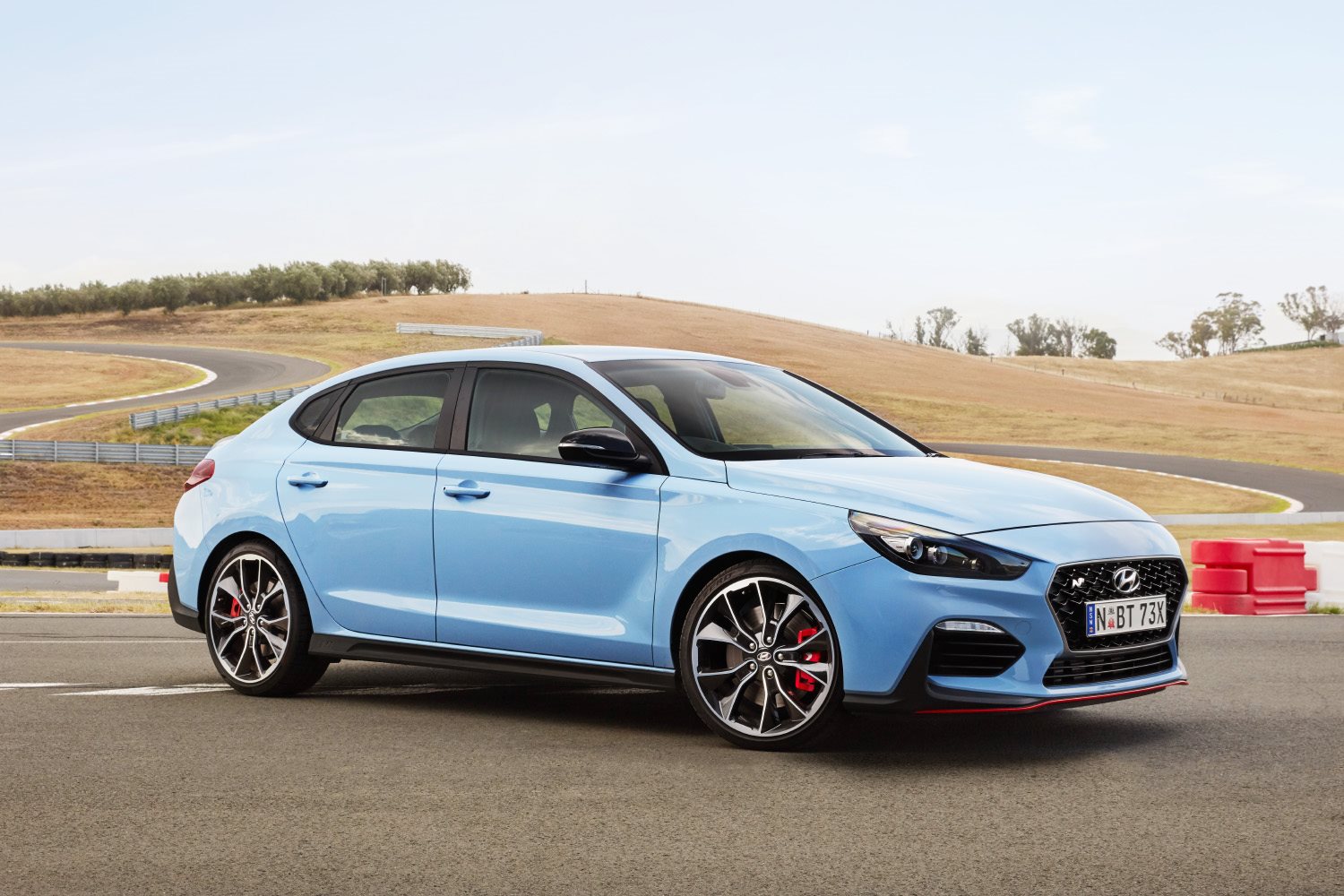 Now, on the back of the hatch’s success, we have the i30 Fastback N. Essentially it’s a five-door hatch that’s morphed into a sleek five-door liftback, a mini-me version of the in-fashion four-door coupe silhouette. At $41,990 it’s $2000 more expensive than the hatch, however, it remains highly specced with items like AEB, lane-keep assist and LED lights part of the standard kit.

Underneath there’s been some changes to its suspension, but overall the mechanical goodies remain. The 2.0-litre four-cylinder turbo still generates 202kW and 353Nm (or 373Nm on overboost) and can reach 100km/h in a claimed 6.2 seconds. The front-wheel-drive architecture and electronically controlled LSD carry over, as does the six-speed manual. There’s still no dual-clutch gearbox – for now at least.

This is an easy car to like. Actually, it’s a riot and sounds like a full-on rally car – which is very cool. Yet its talents extend further than popping and banging theatrics. Genuine dynamic talent and serious performance is now attached to a Korean marque. Badge snobs need not apply. Personally, when it comes to fast, front-drive hatches, I have a strong hankering for the Honda Civic Type R. Yes, I’d be further up the road in one, but also an extra $10K out of pocket.

The Hyundai i30 N hatch is already a seriously potent vehicle for someone that wants a solid mix of practicality and performance. But that might not be enough for some, with the Fastback variant catering to those, along with customers who prefer sedan styling. By adding a bigger boot, the Fastback N hasn’t lost any of the hatch’s dynamic prowess, and it retains the same roaring character that makes it a benchmark in the hot hatch segment.

Choose your flavour. The i30 Fastback N is all about what mode you choose as each alter the Fastback’s persona demonstrably. Push the steering wheel-mounted N button, designated by a chequered flag, and everything is turned up to 11. The 2.0-litre four-pot feels as strong as its 202kW/353Nm figures suggest, but there’s not a great deal of value searching for the redline as power trails off higher in the rev range.

It’s a linear unit matched with strong levels of traction. Occasionally the fronts will scamper over uneven tarmac and the abundant torque will tug at the wheel, but you can make swift progress. The six-speed manual is pleasing to use and there’s a well-calibrated rev-match system if you don’t fancy heel and toeing yourself. The brakes are strong and there’s a conventional handbrake if you want to channel your inner Thierry Neuville. 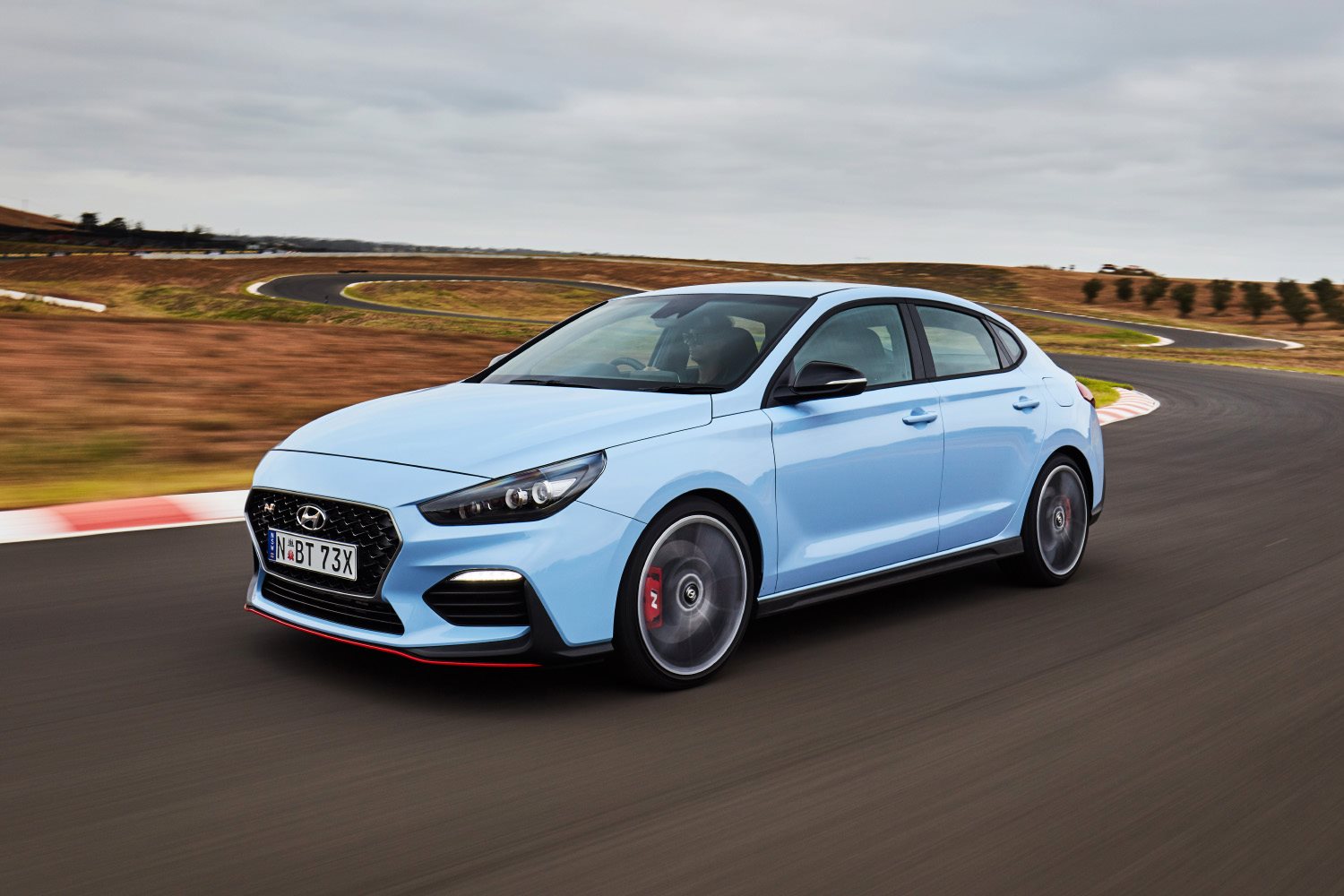 It’s impossible not to talk about acoustics. The i30 N sounds demonic – it pops and bangs on the overrun like you’re at a shooting range. Although, it’s not solely look-at-me drama as there’s a rorty engine note paired with an enticing induction noise. Switch to Comfort or Eco modes and you can putter around with onlookers none the wiser.

In a range of conditions, the Fastback delights with layered levels of dynamic ability. It’s a feast for the senses in all the right ways. Overall the centre of gravity is slightly lower and it is both 12kg heavier and 120mm longer past the rear axle compared to the hatch.

The most significant mechanical change is a more forgiving MacPherson strut front suspension set-up with less aggressive bump stops. The adaptive dampers have also been tweaked (slightly stiffer at the rear) and it equates to a ride quality that is more forgiving in more comfort-orientated modes. N mode is still overtly firm, but you no longer need a billiard-table smooth road to engage it. 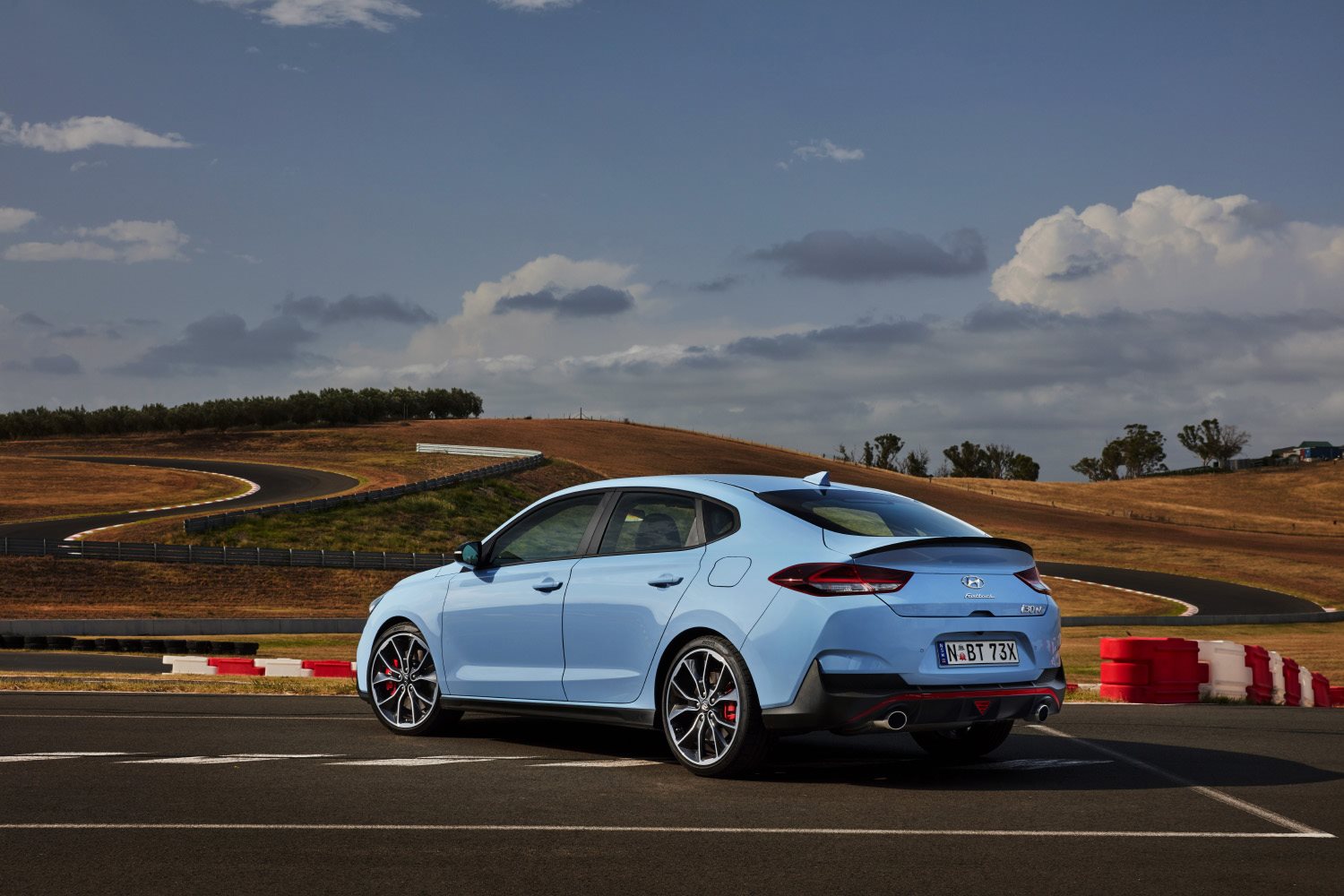 Engagement certainly isn’t something that’s lacking between car and driver. The steering feels meaty, while the front-end is willing and able to attack an apex. If you drive cleanly, the i30 Fastback allowe for impressive entry- and mid-corner speed before any hint of understeer becomes apparent. On the flip side, the rear will dance under heavy braking as you add lock. This isn’t alarming; working with the yaw movements only increases the fun factor.

Inside, the Fastback’s dash design and touchpoints mostly mirror the hatchback. And that’s a good thing, as ergonomics remain high and the expected level of tech is present. It isn’t bathed in soft-touch plastics and you get the feeling Hyundai’s N division placed more monetary value in upgrading the running gear over all else. 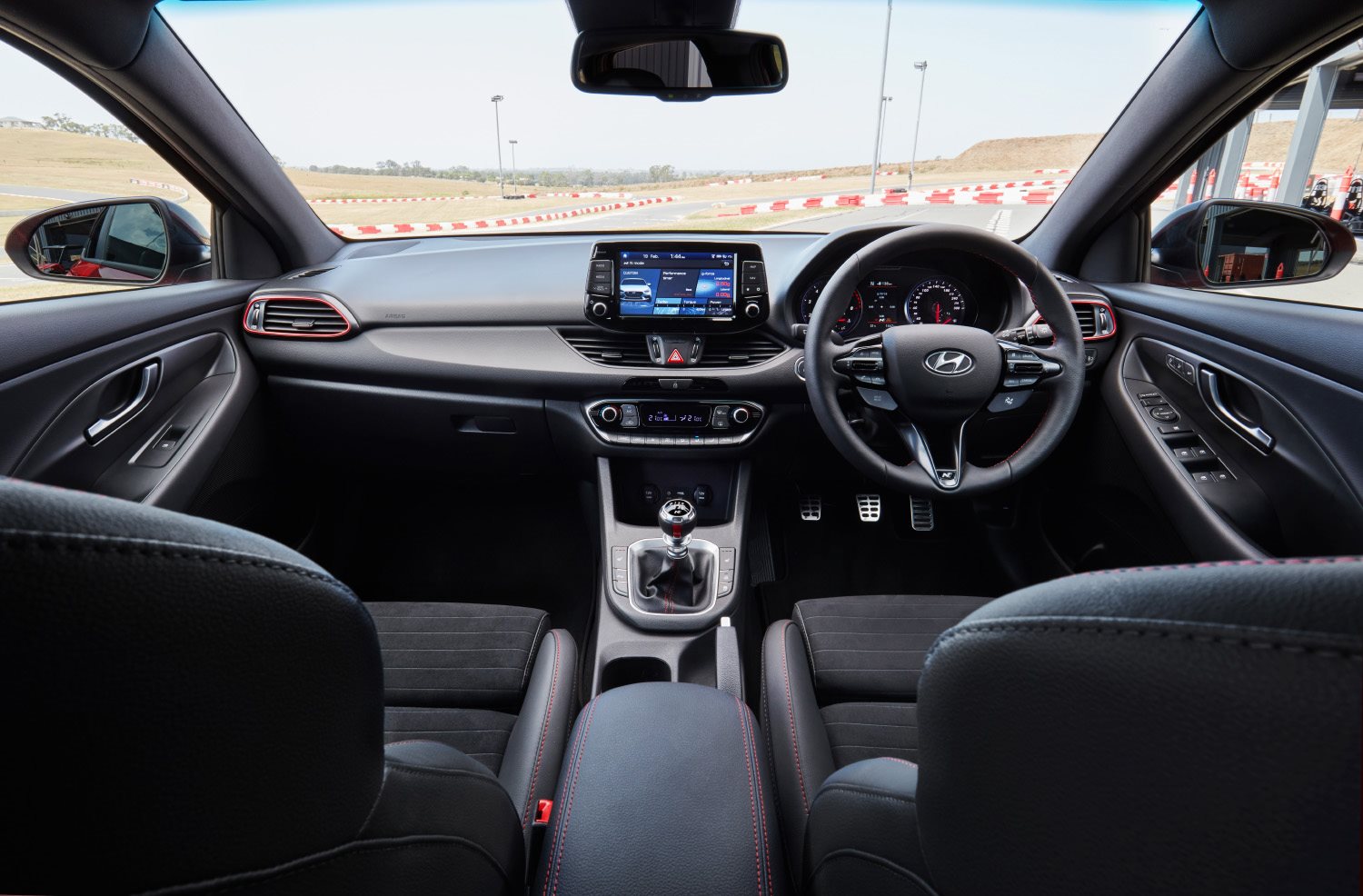 Rear headroom isn’t compromised too much despite having a 21mm lower roof, affording enough space for adults to sit comfortably. The legs, knees and toes of back-seat passengers won’t find much reason to complain in terms of space, but overall they might baulk at a lack of rear air vents. The boot space is 436 litres, which expands to 1337 litres with the 60:40-split seats stowed.

In terms of bang for your bucks, the Fastback version of the i30 N is a real winner. Whether or not punters like the styling or see value in the price-premium for the swoopy liftback design is up to personal preference. It’s a decision made harder by the fact that the hatchback now receives the same suspension tweaks. Ultimately it doesn’t really matter which form factor you choose.

It’s baffling to think that the Fastback is part of a first hit out for the N performance range given its competency. First attempts rarely foster such impressive results. Overall, the i30 Fastback N endears itself in ways many hot hatches can’t. And for that, we can’t help but like it. 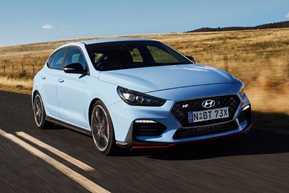