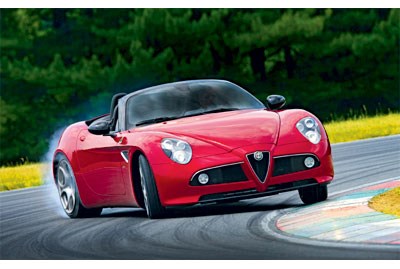 From the moment your thumbprint on the starter button is answered by a burst of V8-flavoured decibels, it's clear the Alfa Romeo's 8C Spider is up for the challenge.

ALFA ROMEO'S 8C Spider is one of those cars that invites the suspicion that it will be absolutely at its best when parked. There's just so much beauty to enjoy without ever tugging the right-hand paddle and kicking the accelerator. Plus, it is an Alfa Romeo, so there's always the risk that the drive will never live up to the looks.

But the moment your thumbprint on the starter button is answered by a burst of V8-flavoured decibels, it's clear at least the business end of the 8C Spider is up for the challenge.

But first let's look beneath that achingly gorgeous sheetmetal. As much as possible of the donor coupe's architecture has been retained for the soft-top version. The same steel platform underpins the car, placing the engine behind the front wheels and the gearbox ahead of the rears. Inevitably, some reinforcement has been added in strategic areas and in the engine bay, but the overall weight of the car has only increased by a modest 90kg.

Where the Spider deliberately strays from the script is in its suspension. There are still double wishbones at each corner working with conventional dampers, but here you find stiffer springs and anti-roll bars to, perversely, help improve ride quality. The secret is in the careful selection of gentler damper settings to allow the suspension to breathe more.

As for the engine, Alfa Romeo hasn't fiddled with the 4.7-litre, Maserati-sourced V8. Apart from retuning the exhausts to make the most of its new open-air arena, it's the same 336kW unit powering the coupe and thunders the Spider from 0-100km/h in a claimed 4.5 seconds and beyond 290km/h.

And so the moment to drive arrives. Underway, wind management around the cockpit impresses but what strikes most is the compliancy of the ride. I don't think anyone will complain that the Spider rides too stiffly.

So the 8C Spider is gorgeous to look at and clearly well suited to a grand touring role. Is it too much to hope that it's also receptive to being hammered around Fiat's Balocco test track?

Apparently not. In theory this heavier, less rigid Spider should struggle to match the standards of the already twitchy coupe, but that's not how it transpires. Alfa's engineers have produced a roadster that's better to drive than its hard-top sister. And that's something you won't often read in a motoring magazine. Maybe never again.

No-one's going to criticise the tireless stopping power of the car's ceramic brakes (but pedal feel is deader than disco) or the way this front-engined Italian angles into a corner, fully justifying Alfa's keenness to centralise the car's masses as much as possible. Its weight distribution is actually a perfectly balanced 50/50, while the coupe's is 49/51 front-to-rear.

Once settled and stable, the Spider's natural desire is to understeer, and while the coupe would also allow this trait to be cancelled by the kick of foot on throttle, I don't recall it doing so with this kind of grace.

And however it behaves, you'll always have that engine at your command. The whole road-testing vocabulary from thunder to shriek is in there, but it's the crackle on the overrun at about 4000rpm in third gear that I'll remember most. How Alfa manages to pass drive-by tests with those exhausts will always be a mystery to me.

It's not hard to find faults with the Spider, not only for the wooden feel of its brakes but also its heavy steering and the fact that its gearbox swaps cogs neither as swiftly nor as smoothly as its rivals' dual-clutch alternatives.

But the truth is that when taken as an entire experience, the Spider is one of the most special roadsters you can buy — or would be able to buy if those damn Italians made the thing in right-hand drive...

But credit where credit is due: it doesn't matter if you're looking at it, listening to it, cruising in it or thrashing the pants off it; the Spider captures all you could ever hope for from a 21st-century drop-top Alfa sports car.