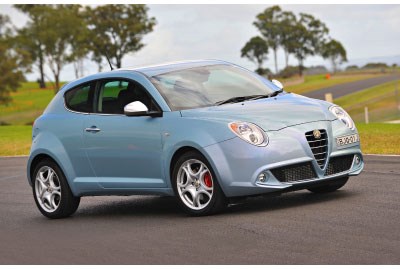 I bet I know what you want from the Alfa Mito. I'll bet that, like me, you want this little Hello Kitty-faced pocket hottie to be fast, noisy, alive in your hands and root-your-poodle obnoxious.

Sorry to disappoint, but it's not the least bit noisy. Nor is it fully those other things, to the extent of bygone, budget-boned GTIs. But the Mito, at $31,490 base and $37,490 Sport, isn't chasing cheap, raw hatchbacks.

The Mito (it means both 'myth', and a blend of Milano and Torino) is underpinned by the Fiat Punto's strut front/torsion-beam rear platform. Nothing wrong with that. Developing Mito exclusively as a three-door gave designers greater freedom to coupe-fy it, inside and out.

Both the Mito and Mito Sport are powered by 1.4-litre turbo engines (see breakout). The five-speed manual Mito's no slouch, with 0-100km/h in 8.8 seconds; one-tenth quicker than the similarly powered Punto T-Jet.

Steering adjusts for height and reach, and both left and right seats get lumbar and height adjust. But nobody gets grab handles or much storage.

A class first in both cars is DNA, a three-mode (Dynamic, Normal and All-Weather) control for steering, throttle and ESP response. The latter governs behaviour of the trick Q2 diff.

Something sure works, because the Mito's turn-in response is as quick, sharp and grippy as anything out there, although the steering feels wooden, even when firmed up in Dynamic mode.

The base car is nicely quick, albeit lacking the urgency and edginess of the Sport. But the same is also true of the ride, which is nicer, if still a little busy, on the base car's 16s. The Sport makes more obvious an imbalance of finesse between the front and rear ends; while the nose flows and sticks, the too-stiff tail tries to bully mid-corner bumps and will skitter out of line before regaining itself.

Mito's price puts it right alongside Mini (less performance, more prestige) and RenaultSport Clio (vice-versa) and with practicality bang in between. Overall, the Mito's neither better nor worse; just different. Which is still the best reason for having an Alfa.