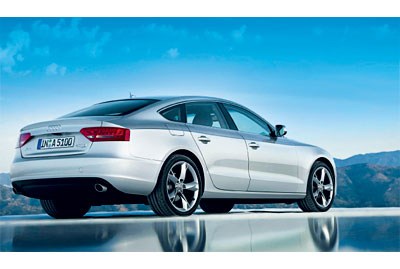 Audi A5 Sportback models that show Audi can, deliver dynamics.

It's the last variant to emerge, but the new Sportback is destined to occupy first place on the A5 sales chart, say Audi execs. Designed chiefly for younger and more sporty European customers than currently buy the A4 sedan or wagon, the hatchback should score a couple of points more root-worthy on anyone's 'Would You?' scale.


While the front third of the Sportback is familiar A5 inside and out, the hatch is built on a longer (by 59mm) wheelbase than the two-door models. This takes the hatch's axle-to-axle distance 2mm beyond that of the A4. But the Sportback has the A5's broader-than-A4 front and rear tracks, and is a little lower, so its fundamental proportions are inherently sexier. Audi's designers, to give them their well-earned due, did pretty good work on the Sportback, making the most of the raw material.

The Sportback's interior provides rear leg and shoulder room similar to that of the A4, and headroom is only slightly less. Anyone up to around 185cm tall won't feel too cramped for space. The A5's cargo compartment has the same 480-litre capacity as the A4 sedan, but is easier to access.

Perhaps because someone at Audi felt the Sportback was in danger of being perceived as a hatch version of the A4 rather than a practical version of the A5, it has only four seats. From the rear of the Sportback, it seems like the decision was made late. There's a vast amount of space between the two seats, making it seem like the original idea was to seat three. It also means the view forward from the rear is mostly front seat head restraint and that taller passengers will find the roof rails uncomfortably close to their heads. Both problems would disappear if the rear seats were moved 50mm or so closer to the car's centreline. While those in the front of the Sportback will find nothing to complain about, this isn't a very clever four-seat package.

'Not very clever' also applies to the chassis set-up of most Sportback variants. While Audi's drivetrain expertise is considerable, the fine engines and excellent transmissions seldom seem to go to worthy homes.

The 3.2-litre V6 quattro, for example, is a pretty awful thing to drive. The suspension manages a combination of both harshness and a lack of control that ruins ride and handling, and inexplicable variations in weighting make the steering pretty unpleasant.

But there are two A5 Sportback models that show Audi can, if it tries, deliver dynamics. The basic, front-drive TDI rides and handles quite nicely, but the Sportback TFSI quattro with 155kW engine and seven-speed S-tronic DSG, when equipped with optional Drive Select dynamic control system, is a very accomplished car. If you believe that Audis always understeer (because, well, they do ... or at least they used to) this is a car that will change your mind.

Possessing trustworthy front-end bite, good natural balance, strong brakes and a driveline that's a privilege to thrash, this is one of those rare Audis for those who appreciate driving as much as impeccable interior finish. It's the one to look forward to when the A5 Sportback launches here sometime in the first quarter of 2010.